COLUMBIA — A judge dismissed a lawsuit Wednesday against the South Carolina Republican Party over the party leadership's decision to forgo a presidential primary next year.

"The law does not give Plaintiffs a legal right to a presidential preference primary, and the Court will not substitute its own judgment for that of the General Assembly or the SCGOP," Newman wrote. "The SCGOP’s state executive committee acted well within its discretion according to state law and party rules, customs, and precedent."

S.C. GOP leaders reasoned that the $1.2 million taxpayer expense to conduct a primary would be unnecessary given that incumbent Republican President Donald Trump remains overwhelmingly popular with the party's base.

But a pair of South Carolina Republican voters, including former U.S. Rep. Bob Inglis, filed suit against the party, arguing it deprived them of their ability to express their views on the direction of the party by casting a primary ballot. The voters had sought a preliminary injunction to force the party to hold a primary. 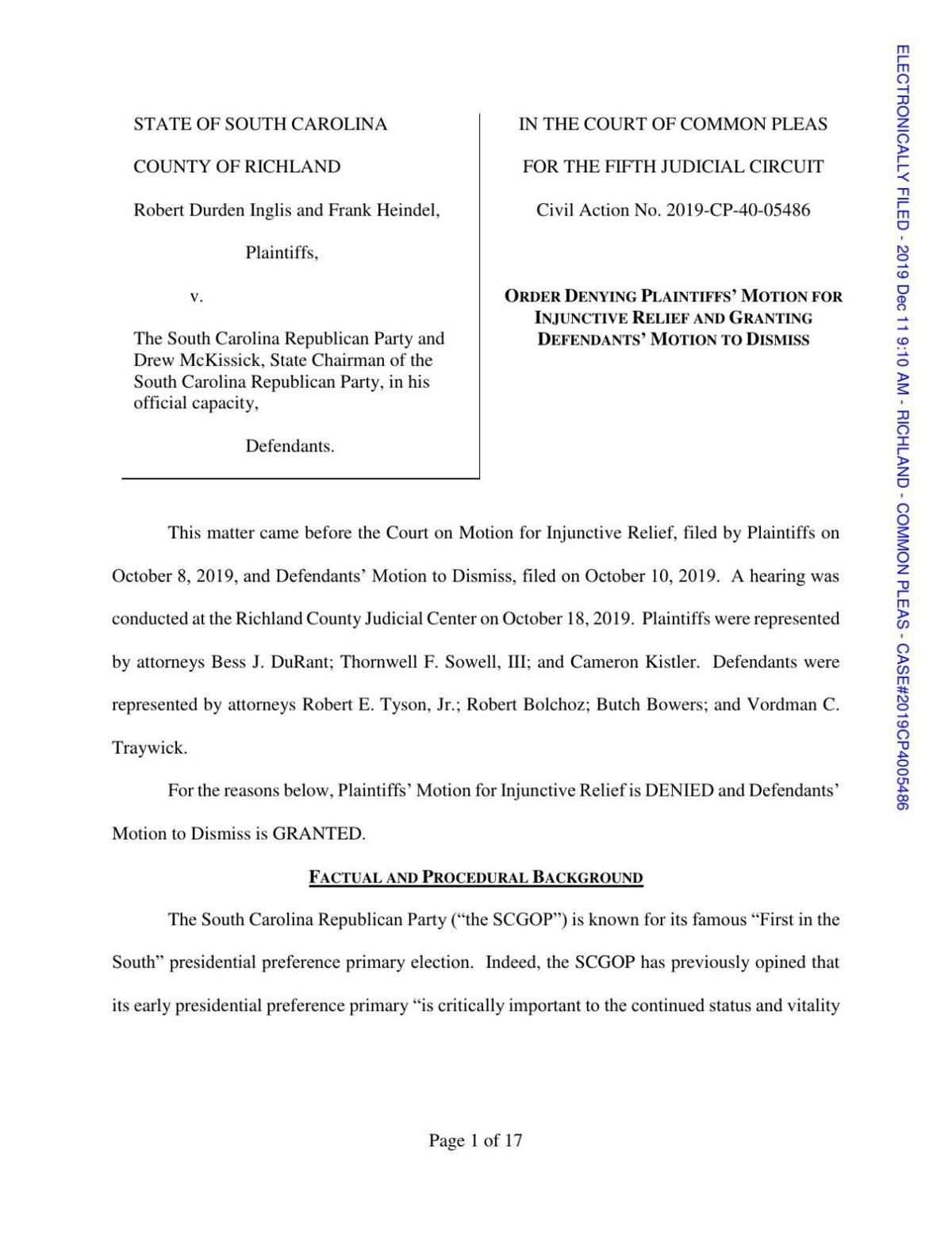 Newman ruled that the South Carolina GOP did not count as a state government actor at the time of the executive committee's decision and would only become one in the eyes of the law if they had decided to hold a primary.

She also determined that some of the statutes the plaintiffs sought to apply to presidential preference primaries only apply to other types of primaries. Presidential primaries are unique in that they do not determine the party's nominee but only bind delegates to vote for a certain candidate at the party's national convention.

'Not fair' vs 'no harm:' Judge hears arguments over SC GOP decision to nix 2020 primary

In response to the argument that the S.C. GOP had violated its own party rules in deciding not to hold a primary, Newman noted that the U.S. Supreme Court has historically deferred to political parties on determining their own processes without judicial interference.

Protect Democracy, a nonpartisan nonprofit, worked with Inglis and fellow plaintiff Frank Heindel to file the lawsuit. Soren Dayton, a spokesman for Protect Democracy, noted that the plaintiffs can appeal the ruling, but he declined to comment on whether they will.

"Party bosses shouldn’t be able to cancel elections and deny hundreds of thousands of voters their voice in selecting presidential candidates," said Cameron Kistler of Protect Democracy. "We’re evaluating all of our options to ensure that every South Carolina Republican has a voice this primary season — even if it won’t be the first voice in 2020."

S.C. GOP Chairman Drew McKissick said the party would now continue working to reelect Trump and other Republicans on the ballot.

“We are pleased that the judge agreed with us that we don't have to waste taxpayer dollars holding a presidential primary to find out what we already know: that South Carolinians support President Trump," McKissick said.