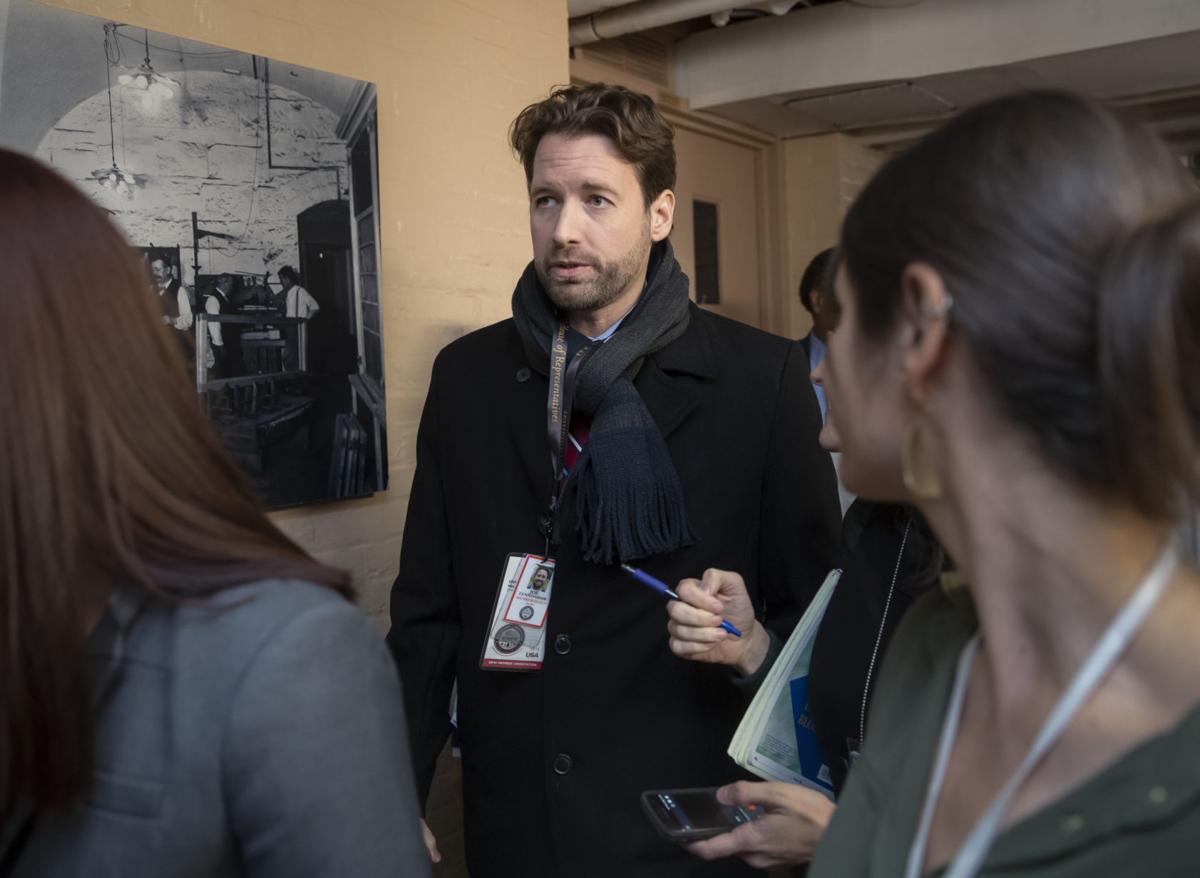 In this photo taken in Washington, Thursday, Nov. 15, 2018, Rep.-elect Joe Cunningham, D-S.C., speaks with reporters as he walks through the basement of the Capitol as new members of the House and veteran representatives gather behind closed doors to discuss their agenda when they become the majority in the 116th Congress. (AP Photo/J. Scott Applewhite) 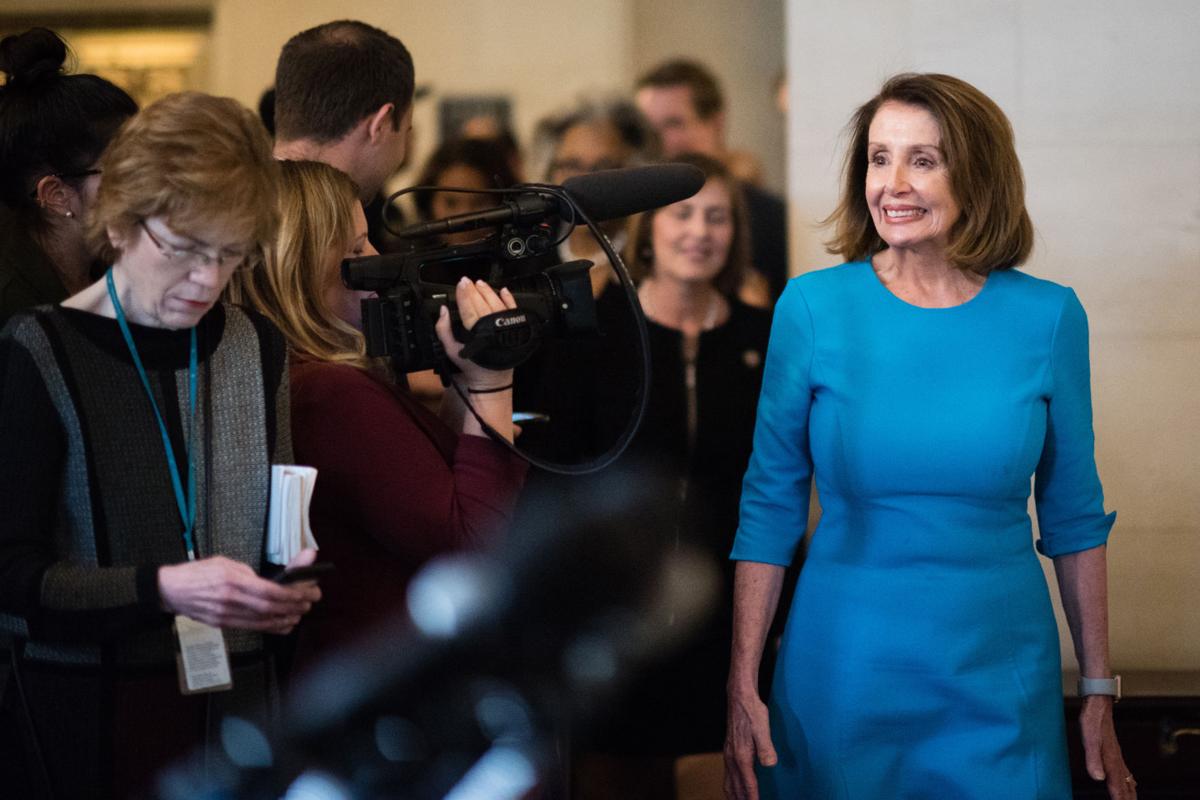 House Minority Leader Nancy Pelosi of California, center, and other members of the Democratic leadership speak to reporters Nov. 28.

In this photo taken in Washington, Thursday, Nov. 15, 2018, Rep.-elect Joe Cunningham, D-S.C., speaks with reporters as he walks through the basement of the Capitol as new members of the House and veteran representatives gather behind closed doors to discuss their agenda when they become the majority in the 116th Congress. (AP Photo/J. Scott Applewhite)

House Minority Leader Nancy Pelosi of California, center, and other members of the Democratic leadership speak to reporters Nov. 28.

Even without Cunningham's vote, Pelosi comfortably won back the gavel with 220 votes, as the vast majority of other Democrats supported her.

Though he decided to keep his alternative choice secret until shortly before Thursday's House floor vote, Cunningham told The Post and Courier he wanted someone who would be a "fresh face" and help Democrats be competitive in more historically red districts.

After the vote, he described Bustos as somebody who checks all the boxes he was looking for and praised her for being "willing to work across the aisle" with Republicans.

Bustos, a 57-year-old Illinois Democrat, is also the new chairwoman of the Democratic Congressional Campaign Committee, which helps support the party's candidates around the country with financial aid and other resources.

A former newspaper reporter and the wife of a county sheriff, Bustos has argued Democrats need to focus on winning back areas where they have struggled in recent years, including rural, blue-collar communities.

While Bustos noted that she personally supported Pelosi, she said after the vote that she considers Cunningham a friend with similar politics to hers and appreciates his support.

Cunningham, who won the state's 1st Congressional District seat in November, began his campaign last year with a call for new leadership in both parties, a desire that he has not wavered from since.

As the first Democrat to win the district in decades, Cunningham is expected to face a stiff reelection challenge from Republicans in 2020 due to the district's conservative track record. Bustos will have significant control over how much national support his campaign receives.

"Joe Cunningham's going to be a great member of Congress," Bustos said. "He understands first and foremost that he represents the people in his district in South Carolina, and I think in two years they're going to have all kinds of reasons to support him again."

Three other new Democratic members of Congress also voted for Bustos for House speaker: U.S. Reps. Jared Golden of Maine, Mikie Sherrill of New Jersey and Abigail Spanberger of Virginia. They were among 15 Democrats total to oppose Pelosi getting the speaker's gavel.

South Carolina's other new congressman, Republican William Timmons of Greenville, voted for U.S. Rep. Kevin McCarthy for speaker, along with all four of the state's other Republicans. McCarthy, R-Calif., will instead become House minority leader.

U.S. Rep. Jim Clyburn of Columbia, who will now become the third-ranking House Democrat as majority whip, voted for Pelosi.

Cunningham faced several other key votes in his first day on the job. He supported Democratic efforts to end the partial shutdown by passing a government funding bill without money for President Donald Trump's proposed border wall.

Trump and Senate Republicans have vowed to continue opposing that effort, claiming the wall is vital for border security. But Cunningham noted that Trump promised the wall would be paid for by Mexico, and he said the U.S. should instead spend money on other border security measures, like increased personnel and satellite imagery.

“I think walls were great methods in the 1400s because that was the only technology we had,” Cunningham said. “Now, when we start hearing from the experts on what the most efficient use of our tax dollars are… I think that a lot of people would believe we have so much technology at our fingertips right now that we can control our border in a more efficient manner."

Cunningham also supported a rules package that would institute a system known as "paygo," which means any legislation that increases spending or cuts taxes would need to be offset by other spending cuts or tax increases — a rule designed to avoid increasing the national deficit.

The rule has become increasingly controversial, as some progressive members fear it will hamstring their efforts to pass ambitious new government projects. Cunningham said he views it as an issue of fiscal responsibility.

"In my house, our kitchen table, we balance our budget every month, and like most families in the Lowcountry and South Carolina, you spend only what you bring in," Cunningham said. "I think people want their government to act in that same manner."