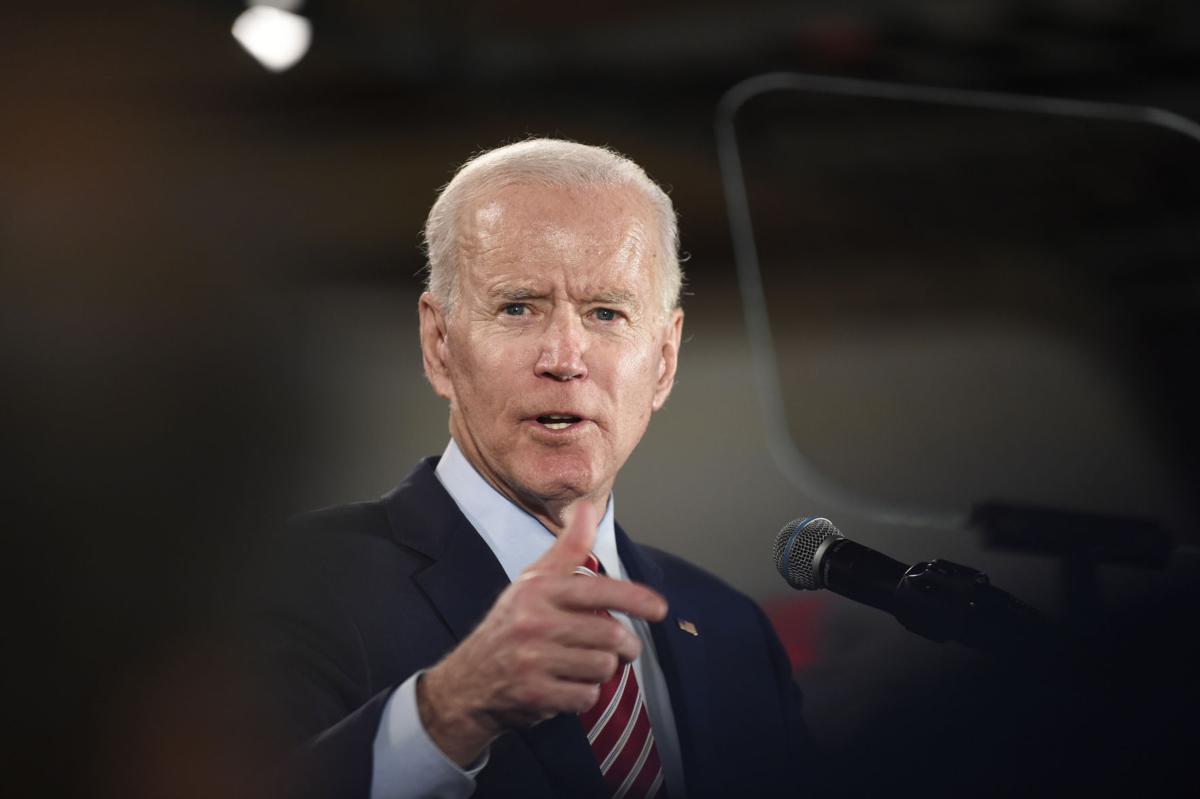 Democratic presidential contender Joe Biden speaks at an election rally on Tuesday, Feb. 11, 2020, in Columbia, the night of the New Hampshire primary. Now on his third presidential campaign, Biden is seeking his first-ever state victory after again falling short Saturday in the Nevada  caucuses. File/Meg Kinnard/AP 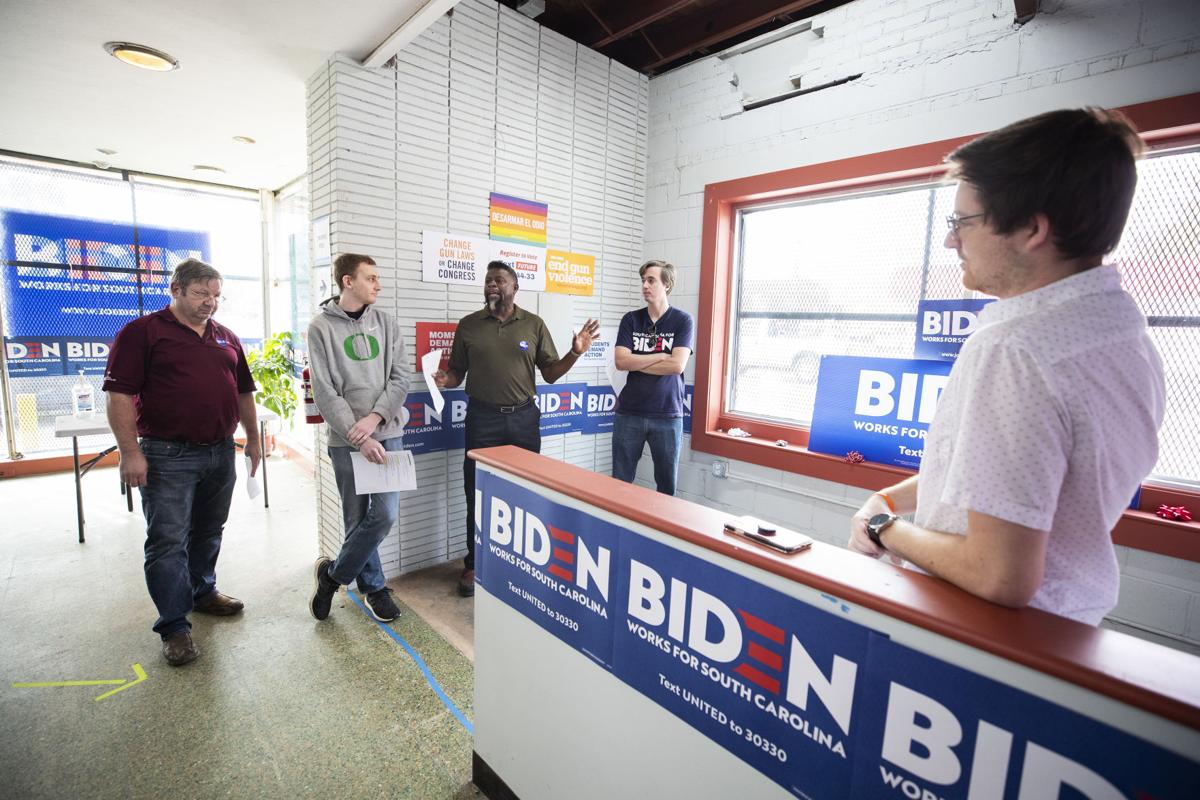 Volunteers with Joe Biden's campaign meet before canvassing a neighborhood in North Charleston on Wednesday, Feb. 12, 2020. Now on his third presidential campaign, Biden is seeking his first-ever state victory after again falling short Saturday in the Nevada caucuses. File/Lauren Petracca/Staff 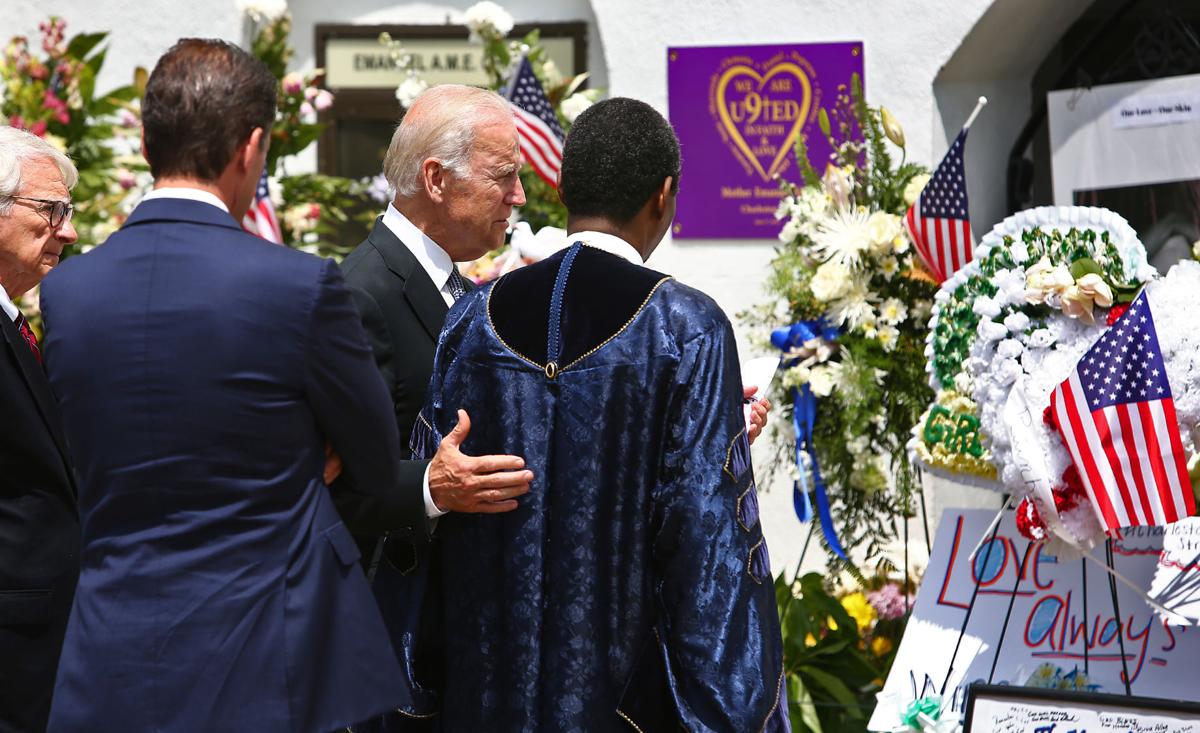 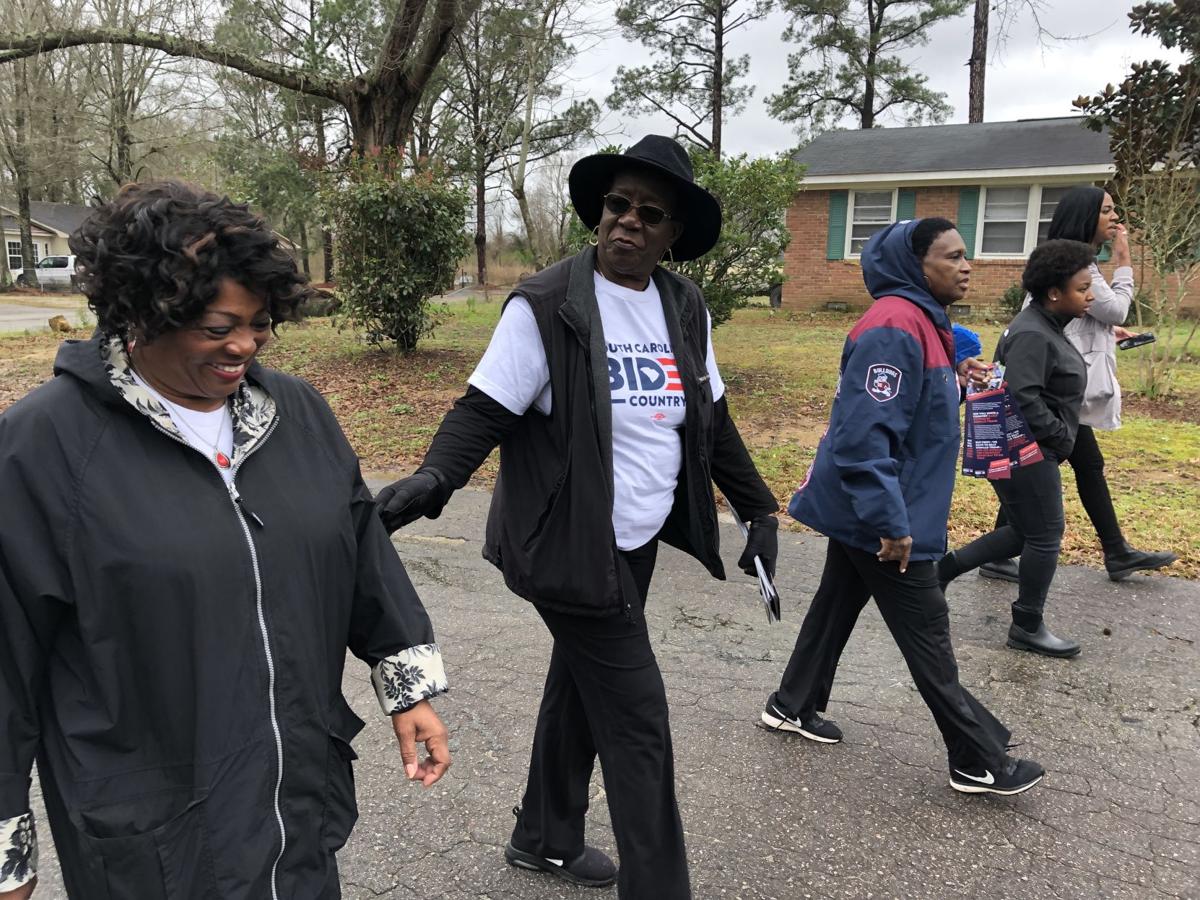 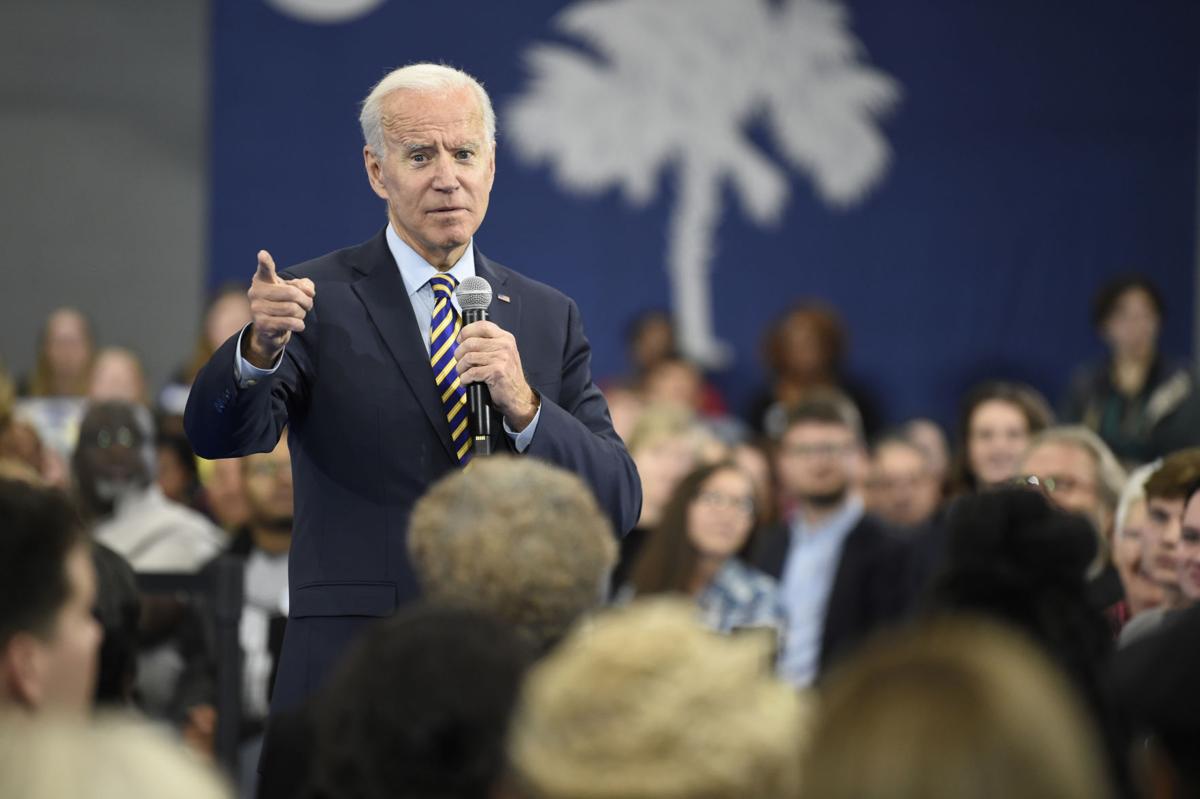 Democratic presidential contender Joe Biden speaks at an election rally on Tuesday, Feb. 11, 2020, in Columbia, the night of the New Hampshire primary. Now on his third presidential campaign, Biden is seeking his first-ever state victory after again falling short Saturday in the Nevada  caucuses. File/Meg Kinnard/AP

Volunteers with Joe Biden's campaign meet before canvassing a neighborhood in North Charleston on Wednesday, Feb. 12, 2020. Now on his third presidential campaign, Biden is seeking his first-ever state victory after again falling short Saturday in the Nevada caucuses. File/Lauren Petracca/Staff

HOPKINS — Joe Biden rode into South Carolina last May with a commanding head start, an array of influential friends, an extensive history in the state and strong support from the African American voters who make up a majority of the state's Democrats.

Nine months later, battered and bruised from the daily combat of a national campaign, Biden returns to the Palmetto State on Sunday to kick off what could be one of the most consequential weeks of his 50-year career in electoral politics.

Now on his third presidential campaign, Biden is seeking his first ever state victory after again falling short Saturday in the Nevada caucuses, chasing a triumph that has eluded him through plagiarism scandals and health scares, surging rivals and fickle donors.

In a sign of how critical South Carolina is to Biden's campaign, the former vice president plans to spend every one of the final few days before the Feb. 29 primary in the state, declining to move on early to any of the 14 states that will vote just three days later on Super Tuesday.

Biden has cast South Carolina as the springboard that will launch him into the contests that follow with momentum. All recent signs indicate he desperately needs it.

National polls now have Biden substantially trailing Bernie Sanders, and he has also fallen behind in some of the key states that award huge numbers of nominating delegates, such as California and Texas.

Though not on the ballot in South Carolina, former New York City Mayor Michael Bloomberg has cut into Biden's support among African American voters elsewhere by spending hundreds of millions of dollars in advertising.

With neither the personal funds of billionaires like Bloomberg or businessman Tom Steyer nor the army of small-dollar contributors that Sanders can rely on, Biden risks running short of resources if his donors come to believe he can no longer win.

With 2020 Democratic race in flux after Iowa, SC takes on even more importance

That combination of factors means perhaps no candidate from either political party has ever depended more on a South Carolina victory to stay alive, said College of Charleston political science professor Gibbs Knotts, who recently co-wrote a book on the history of the "First in the South" primary.

"(Biden)'s banked so much on doing better once the states get more diverse," Knotts said. "He really has made this a do-or-die situation."

Biden has turned to South Carolina in some of his darkest moments before. Were it not for a South Carolinian, in fact, Biden's life in politics may have ended before it even really began.

Fritz Hollings, the state's longtime Democratic senator, convinced Biden to continue with his Senate plans after his wife and daughter died in a 1972 car accident just weeks after he had been elected.

Hollings would go on to introduce Biden to many of the South Carolinians who have stood by his side for years, including through this campaign. But Hollings himself died days before Biden entered the 2020 race, meaning Biden's first 2019 trip to the state would be for a funeral.

One of those moments at the bottom came just a few years ago. Weeks after another one of Biden's children died, Beau from brain cancer in 2015, he came to Charleston in shared grief with mourners at Emanuel AME Church following the massacre of nine black parishioners.

"He was not only trying to comfort them, but seeking comfort from them," recalled Trip King, a longtime Biden friend and Hollings aide from Columbia. "It was a very emotional time for him."

In this election, political obituaries were already being written for Biden himself after a disappointing fourth-place finish in Iowa followed by an even worse fifth-place finish in New Hampshire. Seeking rejuvenation and determined to keep looking ahead, Biden flew down early to South Carolina for the warm embrace of his most loyal supporters.

"You have no idea how great it is to be back in South Carolina," he said, visibly relieved, turning to the state for solace once again.

Now, though, there are more questions than ever about whether the state will be there for him.

While Biden enjoys broad backing from older South Carolina voters, younger voters have looked to some of the less established contenders, such as Sanders, Steyer, U.S. Sen. Elizabeth Warren of Massachusetts and former Mayor Pete Buttigieg of South Bend, Ind.

"I'm not even hearing much about Biden anymore," said Cornelius Rhodes, a social worker from Greenville, who is deciding between Steyer and Sanders. "It's like he's just cooled off."

Biden's allies have been determined to keep an upbeat face, wary of how easy it is for a candidate to get trapped in a self-fulfilling death spiral. But on the ground and in polls, including the latest Winthrop University poll that had Biden up by just 5 percentage points, there is no question the race has significantly tightened.

"I think Joe’s going to do well, but I say that with crossed fingers because so many things can come into play," said the Rev. Joe Darby, the senior pastor at Nichols Chapel AME Church in Charleston. "Sanders has made more inroads into the black community this time around. But I believe Biden has the strength to come through."

As a group of Biden supporters knocked on doors on a dreary recent afternoon in a rural neighborhood southeast of Columbia, many residents were not in the mood to talk about politics. They were getting ready to go to a funeral.

"When people die in the country, everybody goes to the funeral," Bernice Scott, a former Richland County councilwoman, said as she marched from house to house with Biden flyers in hand. "We have a sense of pride."

At this stage of SC primary, campaigns fight for votes with door-knocking and block parties

Scott was leading her longstanding group of community activists known as the "Reckoning Crew," which consists of dozens of mostly African American women, around the small towns she used to represent and where she remains a renowned figure.

They had knocked on many of these doors multiple times at this point over the past few months, and the few who answered their doors assured them they were still rooting for Biden.

But they knew the flood of TV ads from other candidates and doomsaying from cable news political commentators risked pulling supporters away right at the moment when they need them most.

All campaigns depend on volunteers, including Biden's, but rival campaigns have hired far more paid organizers. Yard signs for Steyer have recently popped up in the area, a visual representation of an increasingly competitive race.

The "Reckoning Crew" has watched a South Carolina front-runner fall apart before. They stuck by Hillary Clinton until the bitter end in 2008, when Barack Obama soared to a landslide win. The experience taught Scott to ignore the polls and speculation.

"All we can do is tell people the truth, give them the card and answer questions," Scott said. "And tell them to cut the TVs off."

Others in the "Reckoning Crew" can feel the race getting closer.

When Mattie Bowdy was knocking on many of these same doors for Kamala Harris' campaign, many responded that they were already with Biden. Now, with Harris out of the race and Bowdy rallying support for Biden, suddenly some of those voters seem less sure.

"It's really hard to say right now," said Bowdy, 68, pausing between houses to catch her breath. "All this money's being thrown around, and all the younger people want the new thing. I'm just praying people go with what they know and trust. We know Joe Biden. I'm just praying."