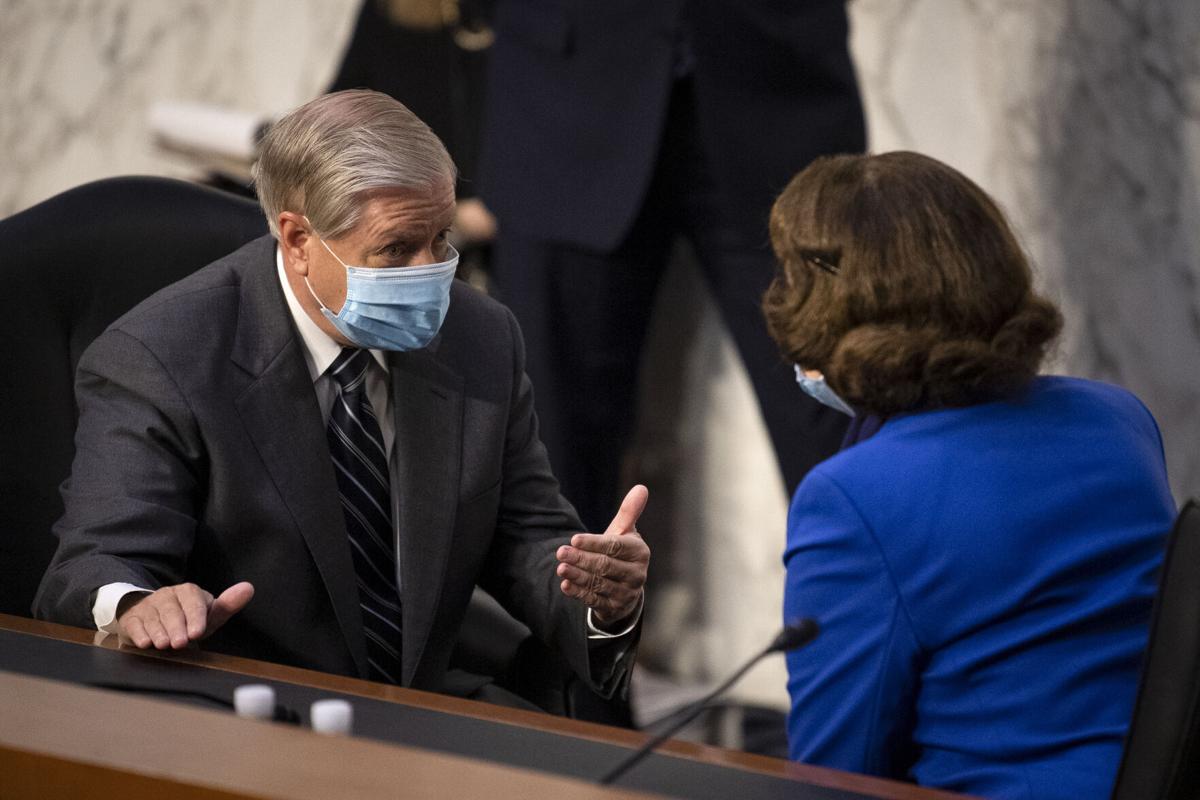 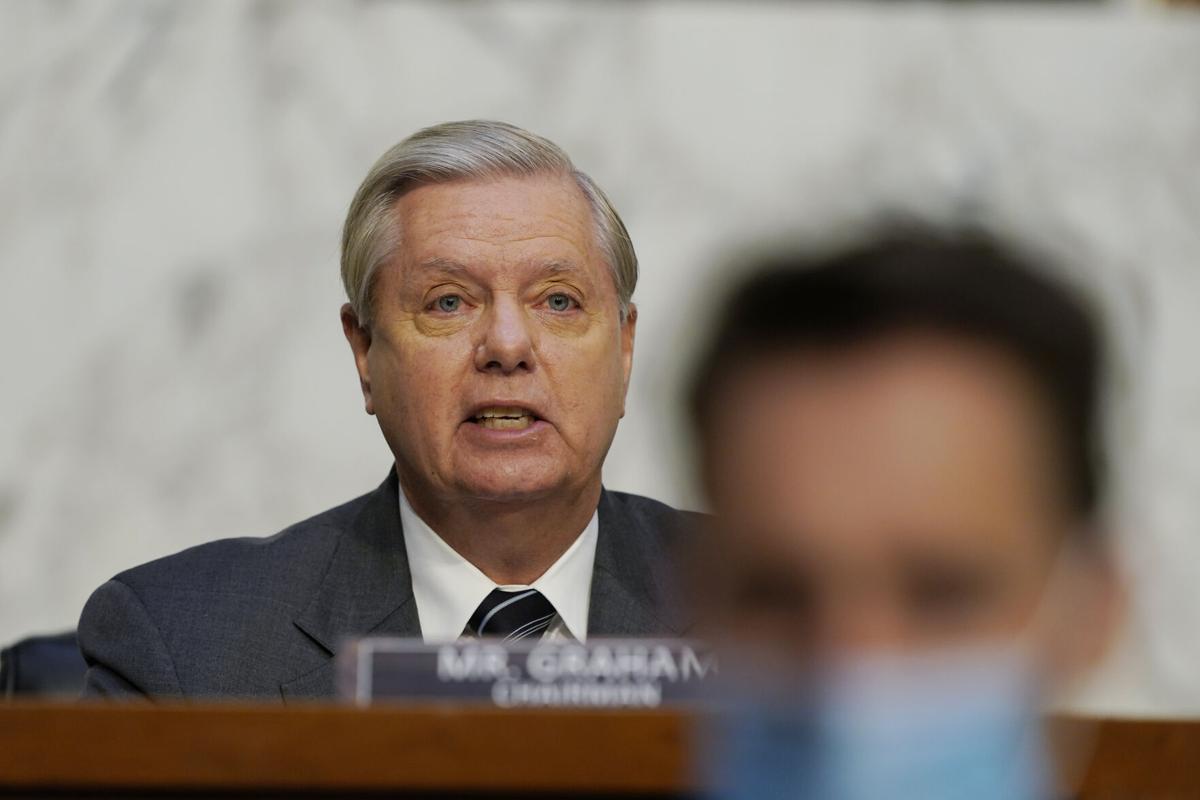 COLUMBIA — At the outset of what he acknowledged would become a contentious week of Supreme Court confirmation hearings, U.S. Senate Judiciary Committee Chairman Lindsey Graham sought to strike a civil tone Monday.

He used his opening statement to hearken back to an era that was far less politically combative. Graham's soft-spoken introduction deployed a conciliatory approach reminiscent more of the reputation the South Carolina Republican once held as a moderate compromiser than becoming one of President Donald Trump's fiercest congressional defenders.

Decades ago, Graham recalled, both Ruth Bader Ginsburg — the progressive icon whose death last month created the vacancy now up for debate — as well as the late conservative hero Antonin Scalia received overwhelmingly bipartisan confirmation votes to the high court based on their qualifications alone.

"Those were days that have since passed," Graham lamented. "I regret that."

The 13-minute ode to bygone days of political harmony came Monday morning as Graham looks to shepherd through Trump's nominee, conservative appellate Judge Amy Coney Barrett of Indiana, who he said is "in a category of excellence" that would make her a worthy successor to Ginsburg.

No less notably, however, the speech came as Graham stares down the most formidable challenge of his political career in South Carolina from Democratic opponent Jaime Harrison. The former state Democratic Party chairman and top Democratic National Committee official announced a day earlier that he raised an astonishing $57 million over just the past three months, shattering national records.

Whether the amicable beginning will last remains to be seen, but Graham's attempt to initiate the hearings in a cordial manner could help both in his role as chairman of the committee and in his pivotal upcoming election, said Danielle Vinson, a politics professor at Furman University.

"It makes perfect sense that the chair of the committee would be taking that tone as someone who’s got to navigate whatever happens in the next few days," Vinson said. "In this case it also happens to serve his electoral interests in the sense that he is trying to remind people that he has typically been reasonable on these issues.”

Harrison has premised much of his campaign on the idea that "Lindsey Graham has changed," saying he once respected the state's senior senator but was dismayed to watch him become a defiant Trump ally in recent years.

Polls have shown that message resonates with moderate and independent voters, who have ditched Graham for Harrison in large enough numbers to make South Carolina — typically viewed as a reliable Republican stronghold — into a much more competitive battleground in the final weeks of the race.

Yet, when it comes to policy views, Graham has not changed much at all.

He has always been a conservative on most hot-button issues, with a moderate streak on some topics like immigration and a hawkish foreign policy. His opposition to government-funded health care, raising taxes, gun restrictions and abortion is nothing new.

What has changed about Graham in the eyes of both Harrison and some of his supporters is his approach to politics.

Known for years as one of the few senators who would seek out opportunities to work across the aisle and find common ground, Graham has since come to be viewed by both Democratic colleagues and some voters as just another partisan warrior.

That transformation was punctuated two years ago by Graham's vigorous defense of Trump's last Supreme Court nominee, Brett Kavanaugh, when he erupted into a tirade against Democrats who argued that old sexual assault allegations against Kavanaugh should disqualify him from consideration.

The moment polarized South Carolina voters, earning Graham a newfound level of admiration from a conservative base that had long been skeptical of him while simultaneously eliciting fresh animosity from Democrats who once appreciated him.

With just a few weeks left until Election Day, Graham returned more in his opening to his pre-Kavanaugh persona, pointing to the Ginsburg and Scalia confirmations as proof that both parties once showed greater respect toward each other.

"I don't know what happened between then and now," Graham said. "I guess we can all take some blame."

"But I just want to remind everybody there was a time in this country where someone like Ruth Bader Ginsburg was seen by almost everybody as qualified for the position of being on the Supreme Court, understanding that she would have a different philosophy than many of the Republicans who voted for her," he added.

Chip Felkel, a veteran South Carolina GOP consultant who has been strongly critical of Trump, said it was "welcome to see that side of Graham today that, frankly, we've been missing for a while."

"When the hearings were announced, everyone assumed they would be a great boost to Graham, but in a race as close as this one, I think it cuts both ways," Felkel said. "So I think how he manages these hearings has to be very strategic, and it was very nice to see Graham 1.0 as opposed to Graham 2.0."

Graham's recollection of the past, however, was selective.

He mentioned Democratic efforts to tank the Supreme Court nominations of Robert Bork, Clarence Thomas, Samuel Alito and Brett Kavanaugh — three of whom eventually made it onto the court anyway.

He did not mention Republicans' successful obstruction of Obama's last nominee, Merrick Garland, who did not even receive a hearing despite being nominated more than seven months before the 2016 election.

In defending the decision to move forward with Barrett's confirmation so close to the next election, Graham cited Ginsburg's comments in 2016 amid the Garland blockade, when she said the president "is elected for four years, not three years, so the power he has in year three continues into year four."

He did not cite Ginsburg's more recent comments about her own replacement, relayed to her granddaughter in the final days before she died: "My most fervent wish is that I will not be replaced until a new president is installed."

Harrison did not buy Graham's shift in tone, saying the Republican incumbent had played "political games" throughout the coronavirus pandemic — "and today is no different."

"Rather than pushing for immediate COVID relief for millions of South Carolinians, Lindsey is rushing to confirm a Supreme Court nominee," Harrison said, noting that 150,000 South Carolinians have now tested positive for the virus and more than 3,000 have died from it. "Shame on Lindsey for not standing up for South Carolina."

Barrett's confirmation hearings will resume Tuesday, when senators will get their first opportunity to question the nominee about her credentials and views on the law. It is at that point that, in recent years, the hearings have become more antagonistic.