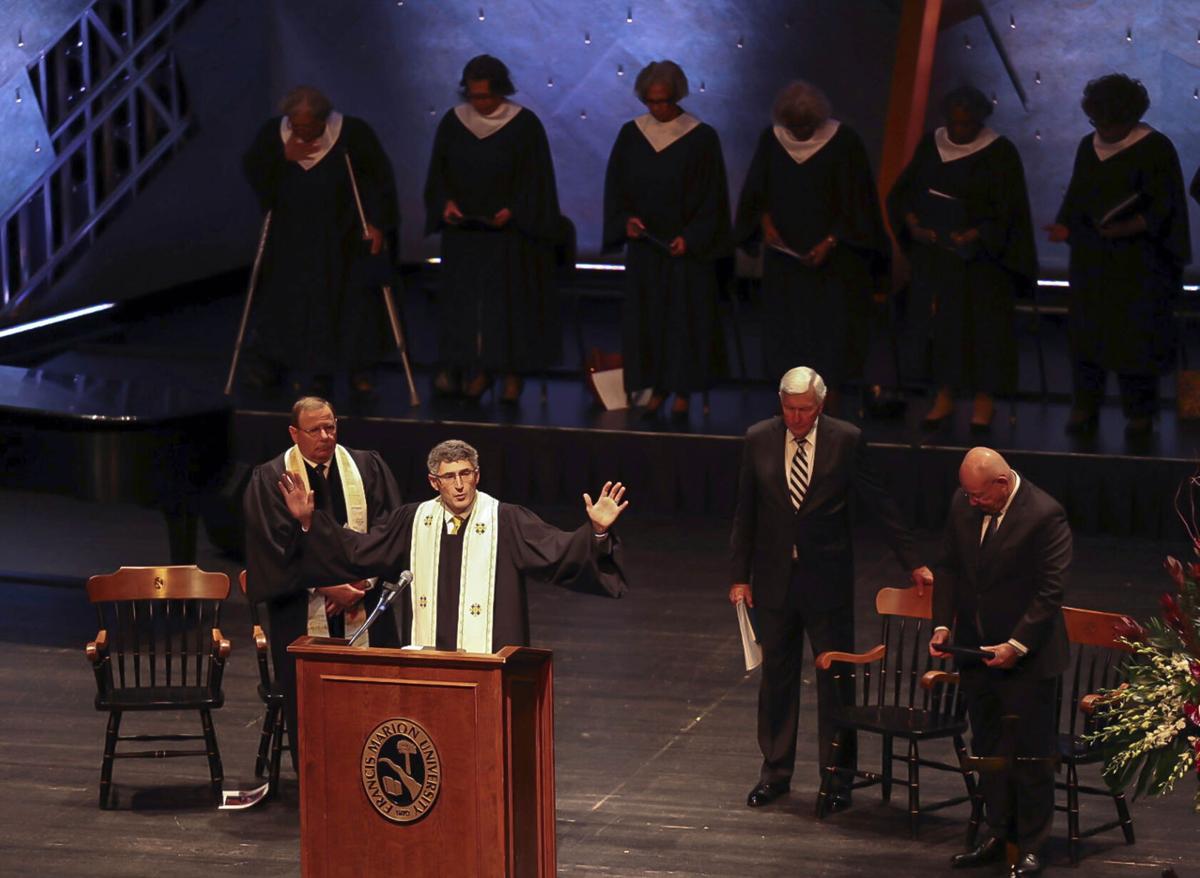 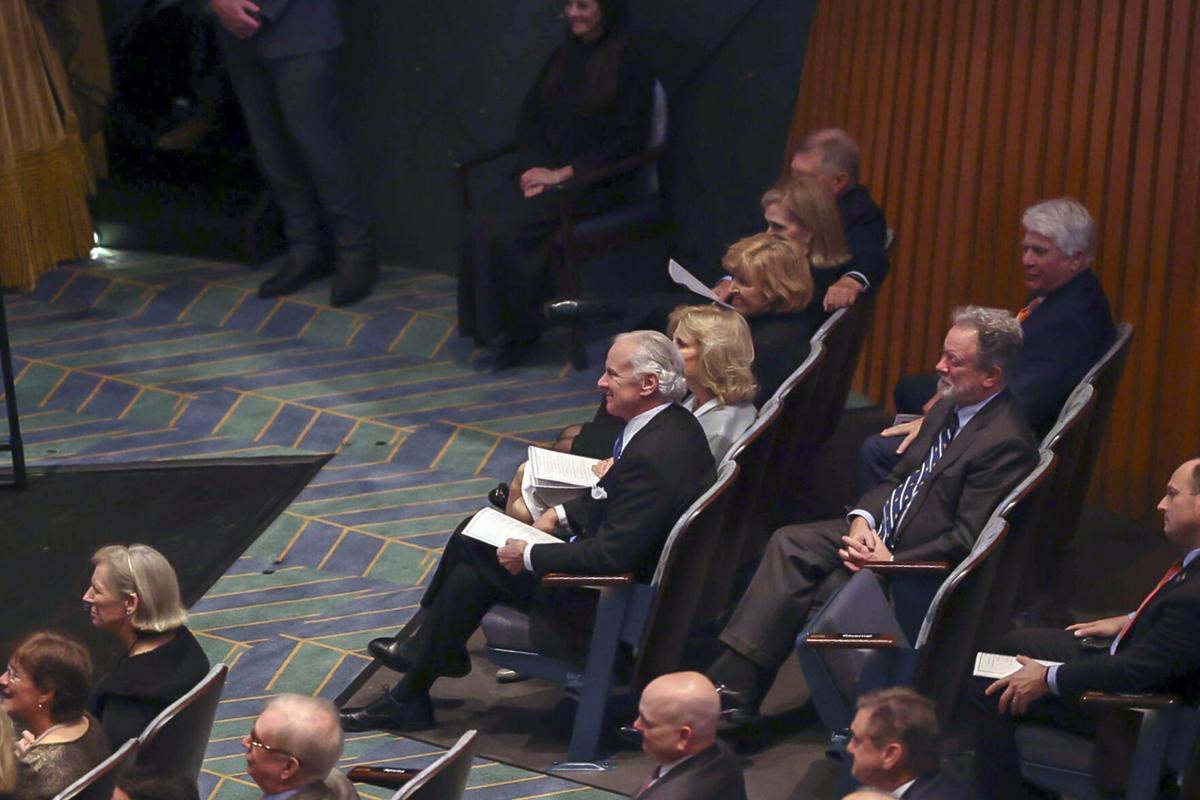 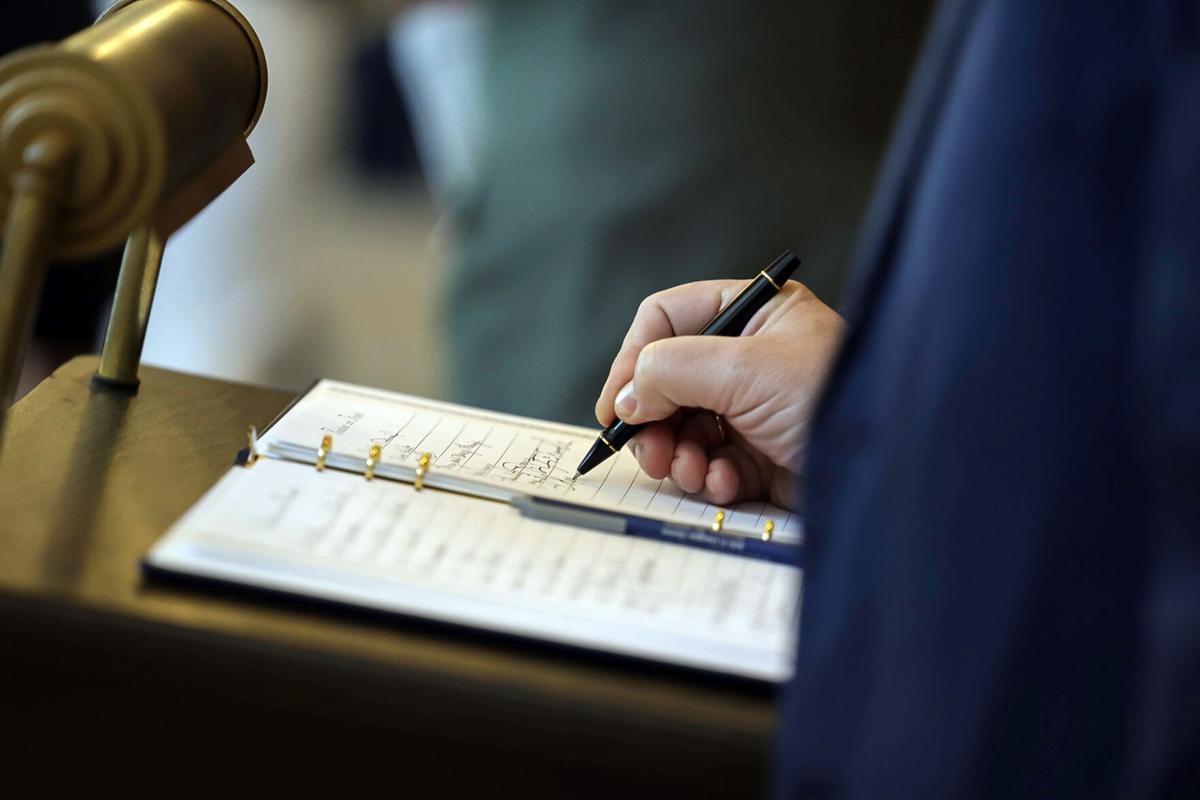 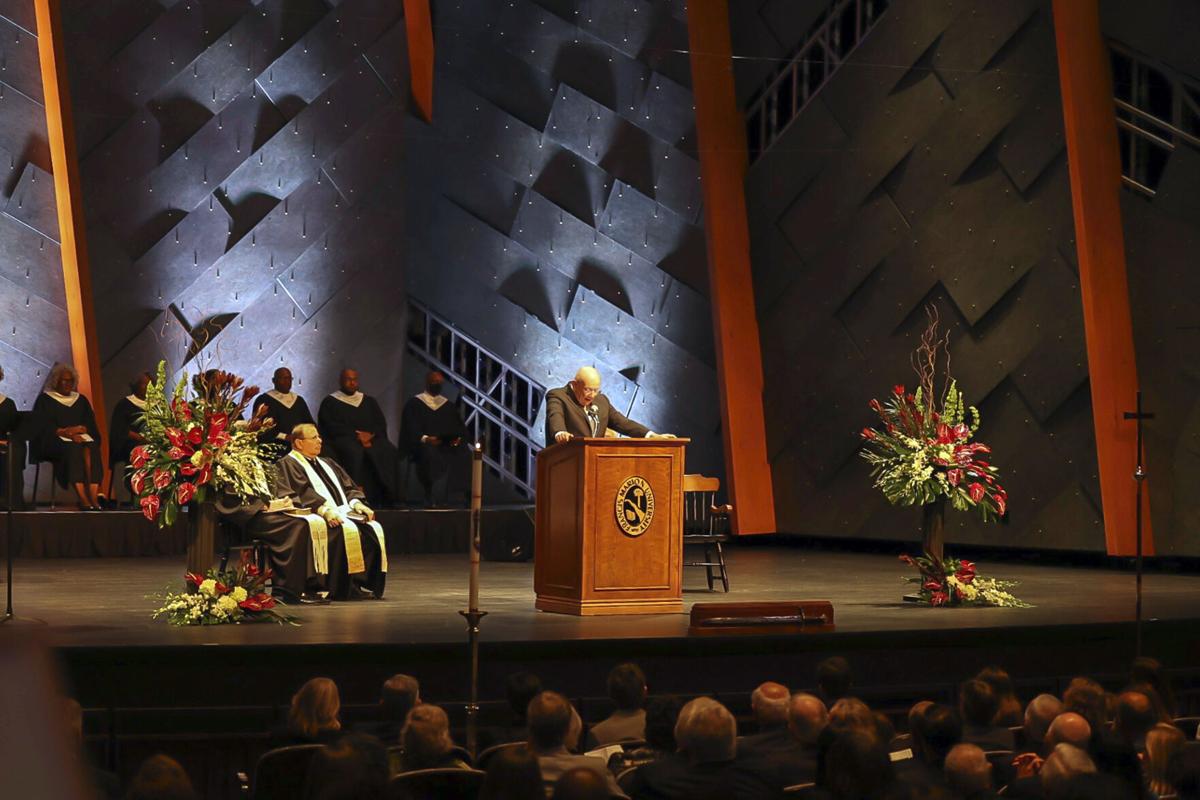 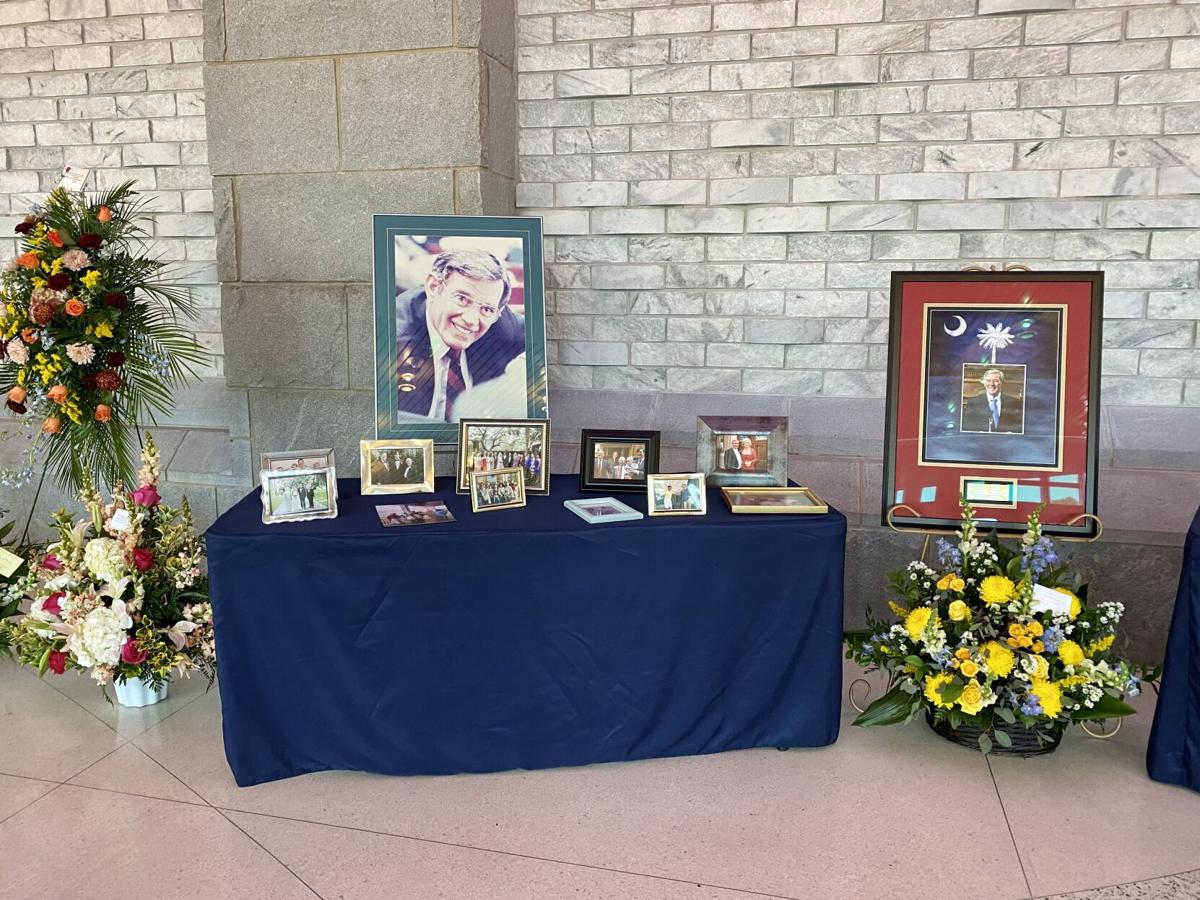 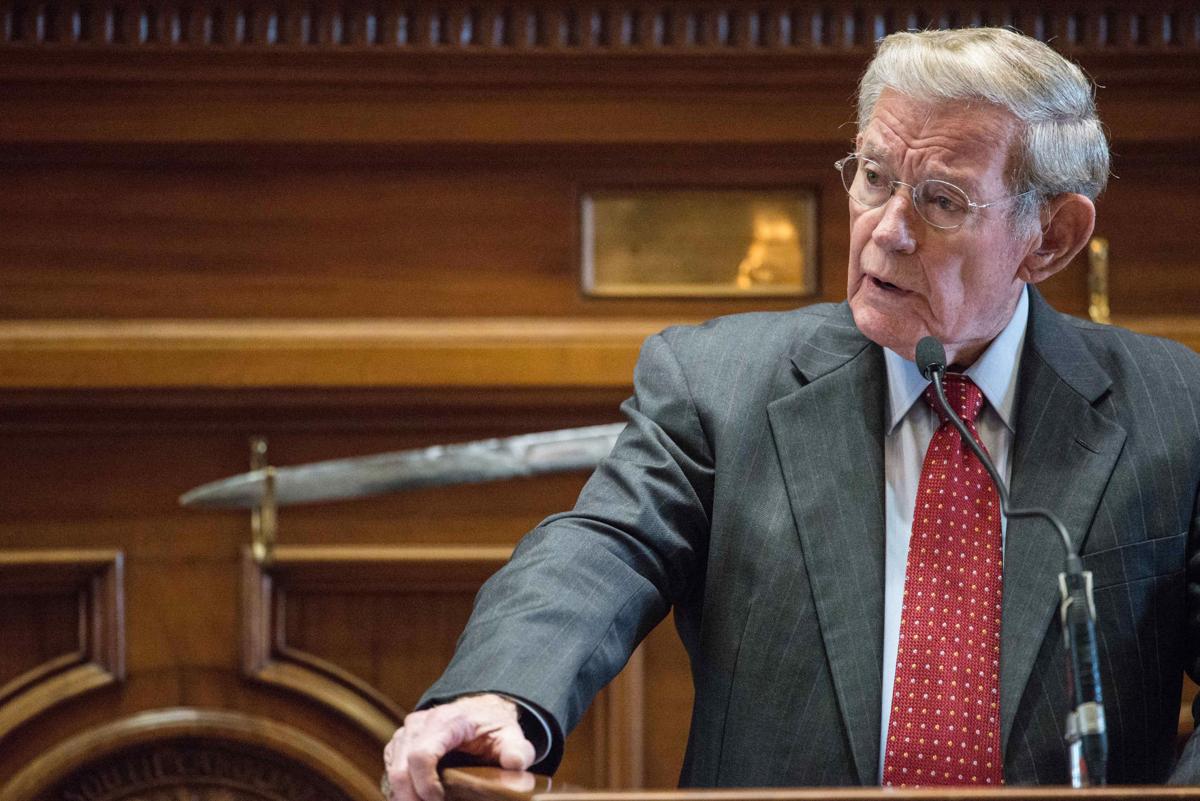 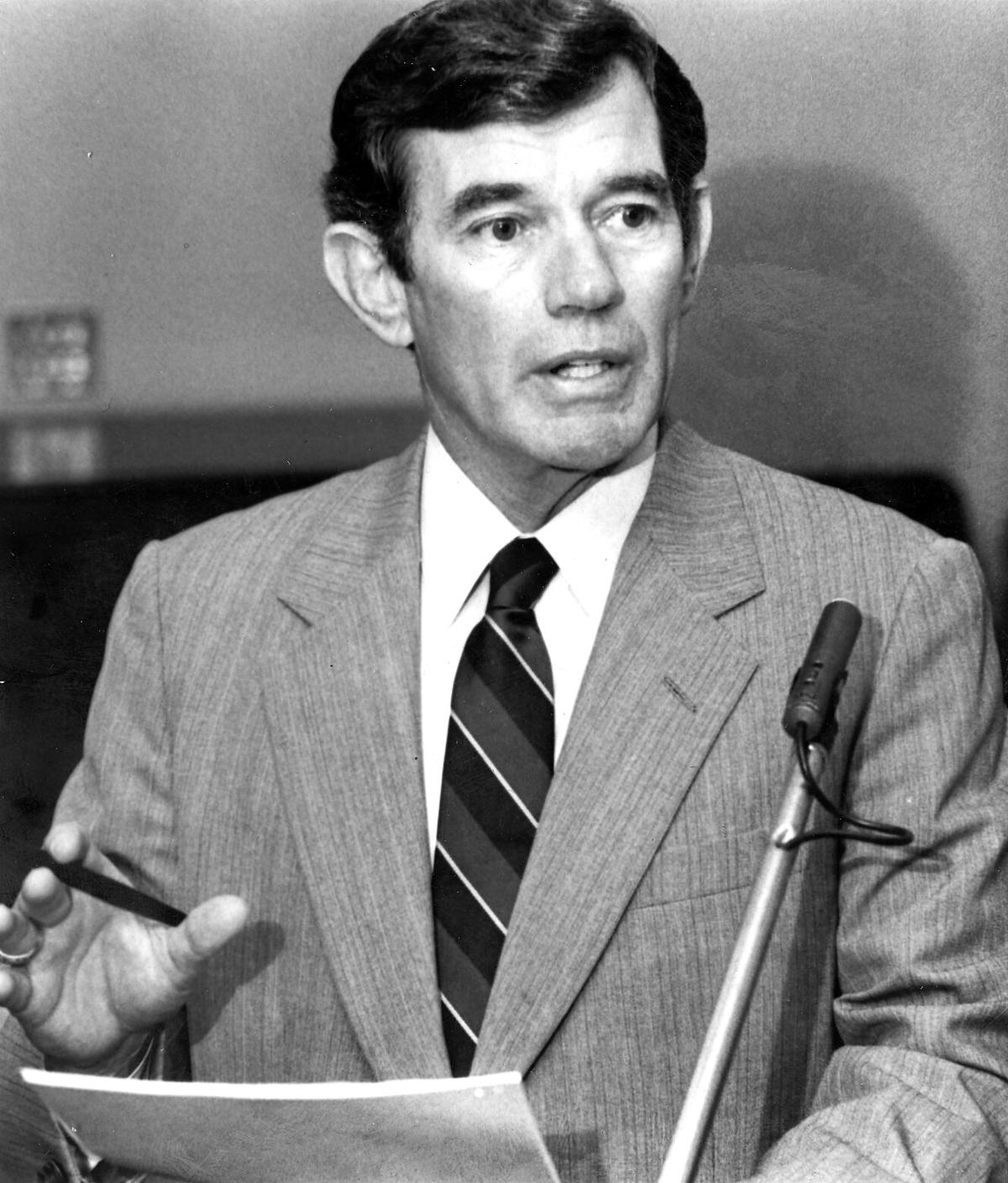 Hugh Leatherman was first elected to the S.C. Senate in 1980. File/Staff

Hugh Leatherman was first elected to the S.C. Senate in 1980. File/Staff

FLORENCE — State Sen. Hugh Leatherman, whose decades-long control over the state's purse strings gave him immense power in South Carolina, was remembered Nov. 19 as someone who embodied the American dream and never forgot his humble roots as he used his influence to better his community and state.

Hundreds from across South Carolina gathered at the Francis Marion University Performing Arts Center in Florence to honor "the Chairman," as he was known for his 20 years leading the Senate's budget-writing committee.

Leatherman, who represented the Pee Dee over 41 years in the Senate, died at home Nov. 12 of inoperable cancer at age 90, a few weeks after entering hospice care. He is survived by his wife, Jean, and six children, as well as grandchildren and great-grandchildren.

Solos at the service included Frank Sinatra's "My Way," perhaps a fitting summation of a political career that spanned six decades, starting with his election to town council in tiny Quinby, outside of Florence, in 1967. Prior to that, the Democrat-turned-Republican grew up poor on a North Carolina farm and was the first in his family to go to college before building a successful concrete company in Florence.

He went on to become "one of the most influential and successful elected leaders in the state," said his longtime friend Fred Carter, president of Francis Marion University.

"He possessed an amazing intellect, coupled with an enormous reservoir of compassion," Carter told funeral guests. "He was usually the humblest person at the table, seldom got angry, and in 33 years, I can't recall him ever raising his voice.

"He never wanted to make permanent enemies, and he believed that no disagreement — personal or professional — should ever devolve in bitterness or discord," said Carter, who gave the eulogy.

Former Senate President Pro Tem Glenn McConnell said Leatherman did things the "Senate way," which is how he interpreted the singing of Sinatra's iconic hit.

"That's how I heard that message — not that it was for him — because I always saw Sen. Hugh as a senator for all South Carolinians, not just a senator for Florence," said the Charleston Republican and former College of Charleston president.

"His way was the Senate's way," McConnell told The Post and Courier during a reception afterward. "His way was what was best for the Senate and the people of South Carolina."

McConnell was among senators past and present of both parties who walked in together as honorary pallbearers, filling several rows in the auditorium, just behind Leatherman's family. Others who came to show their respects included Gov. Henry McMaster, state agency directors and constitutional officers.

State House of Representative members of both parties were also in attendance, including House Speaker Jay Lucas, R-Hartsville.

Senate President Harvey Peeler, R-Gaffney, described Leatherman as a great businessman and politician who "could've been a great military leader, because he was a master strategist."

Noting Leatherman's unsuccessful run for governor in 1986, Carter said his friend "considered it the biggest political mistake of his life."

"No disrespect, Gov. McMaster," Carter said in a moment of levity, "but after the '86 election, he understood clearly that everything he wanted and needed resided within the Senate.

"He cherished the institution, its traditions, procedures, and rules — especially that seniority rule," he said to chuckles, adding that Leatherman always strove to keep the chamber courteous and civil, especially during disagreements.

Leatherman, who first won his Senate seat in 1980, was just the fifth Senate Finance Committee chairman since World War II. He became chairman in 2001 after helping to orchestrate the chamber's flip from Democrat to Republican control, six years after he switched parties himself.

That role alone, which also put him on various other state fiscal oversight boards, made him one of the state's most powerful lawmakers.

He unquestionably took the top spot in 2014 when his colleagues elected him Senate president pro tempore, making him the chamber's official leader, with additional appointment powers. He held both leadership positions until a voter-approved change in the Senate's presiding officer eliminated the pro tem title entirely in 2019.

Leatherman was instrumental in economic development deals across the state, including securing Boeing's move to North Charleston in 2009. His negotiations to build the port's new container terminal on the former Navy base in North Charleston and build two inland ports with rail access are why the terminal that opened earlier this year bears his name.

And yet, despite his stature, he remained humble, said his former pastor, the Rev. Will Malambri, who recalled their first meeting, when Leatherman asked him to address him as simply Hugh.

"Hugh Leatherman understood we are great because of our differences," Malambri said, noting Leatherman was at church most Sundays, whether it was campaign season or not.

His respect of different points of view, he said, likely started with his humble beginnings and "no doubt," grew from having six children.

Leatherman grew up on a farm in Lincoln County, N.C., and graduated from North Carolina State University as a civil engineer in 1953. He received an honorary degree from Francis Marion in 1987.

"His story resides at the very core of the American dream," Carter said.

Leatherman's passing sets off a leadership shift in the Senate.

Peeler is widely expected to be the next Finance Committee chairman. He has been Senate president since the creation of that office in January 2019 and was previously Senate majority leader. Like Leatherman and McConnell, he was first elected to the Senate in 1980. The three were the power trio for years.

Peeler would need to step down as president. Sen. Thomas Alexander is expected to be the chamber's next presiding officer. The Walhalla Republican served four terms in the state House before being elected to the Senate in 1994.