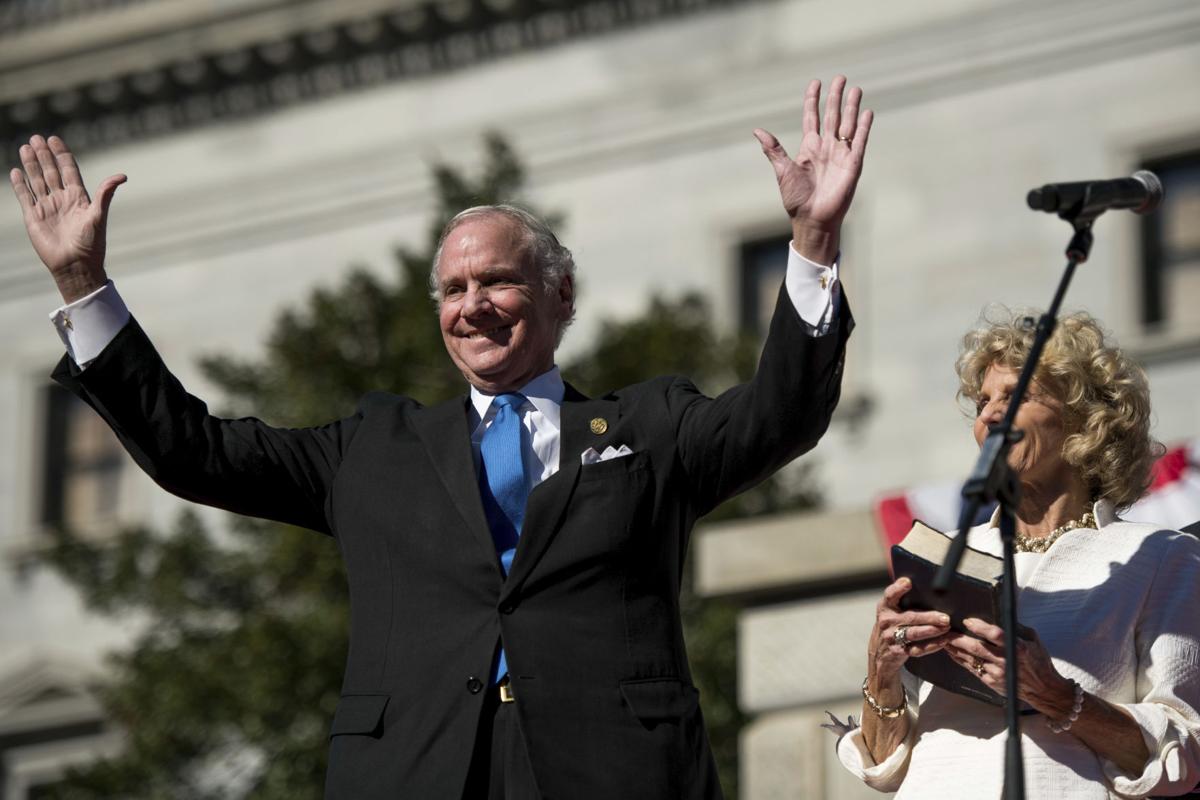 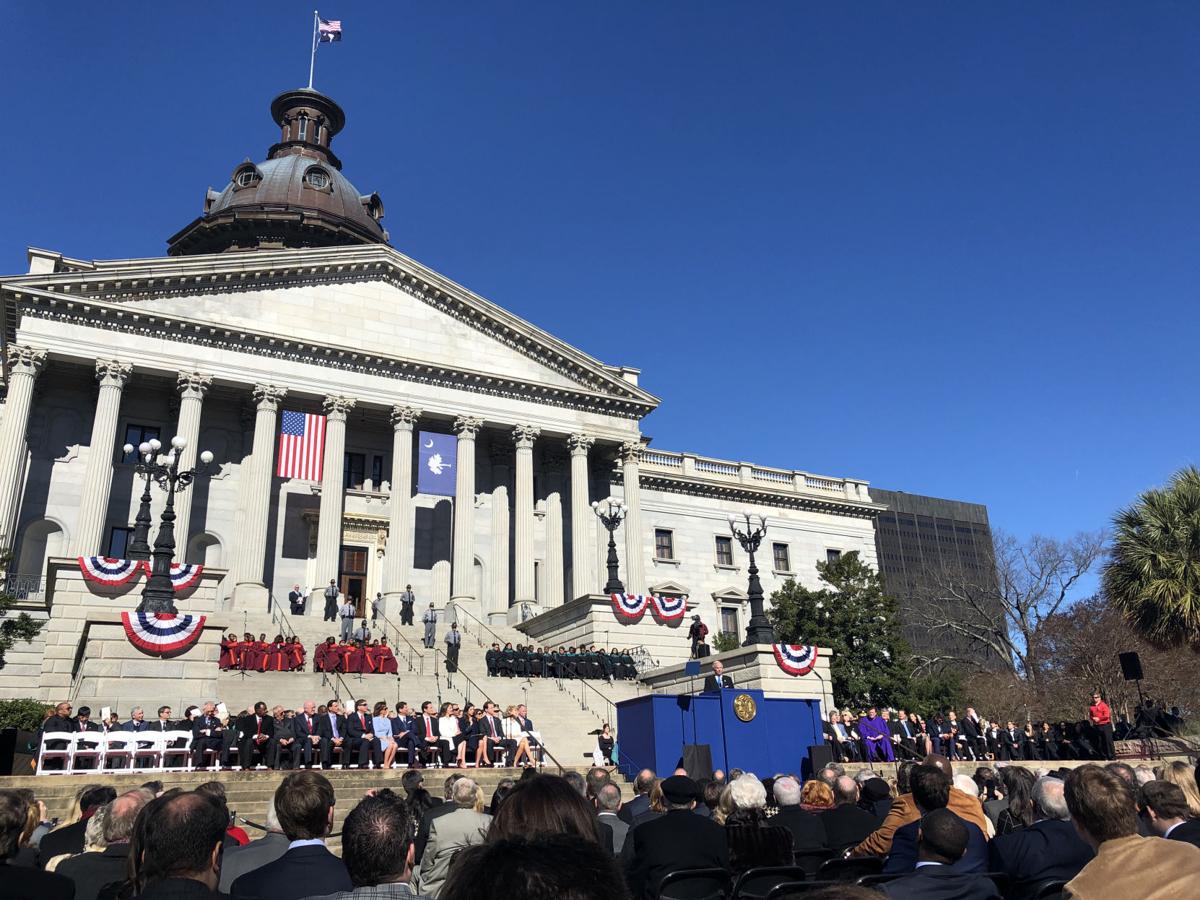 Gov. Henry McMaster speaks at his inauguration outside the S.C. Statehouse on Wednesday.

COLUMBIA — Gov. Henry McMaster's inaugural address Wednesday sounded more like a pep rally, as he urged lawmakers to work as a team to lift up rural areas and fix South Carolina's broken education system, all while continuing his familiar upbeat campaign message that "South Carolina is winning."

The University of South Carolina graduate referenced the Clemson Tigers' third national football championship as proof the state can accomplish great things through teamwork. And he painted himself as a coach who will continue leading the state's players to victory — as long as they change their strategies on education.

The state must invest in developing a skilled workforce, or it will "fumble the ball," said the Republican governor, extending the football analogy.

In his characteristically genial manner, McMaster painted a rosy picture of the state's overall economy, even while acknowledging the state's rural areas — many parts of which did not vote for him — need help, or the entire state will suffer. The post-election speech offered a more realistic assessment of rural South Carolina.

"Our state will never excel and succeed to our fullest potential if parts of our state are 'flat' – or not performing," he said, continuing with another sports analogy involving a record-close finish at the stock car race in Darlington. "If we are bold and prepare for the race in front of us, South Carolina will beat the competition every time."

While McMaster's speech was peppered with calls to invest more in education and infrastructure, he simultaneously called for reforming the state's tax code and sending money back to taxpayers. He gave no specifics of how the state could both invest more and return surpluses.

But his repeated calls to fix education drew some of the heaviest applause of the 16-minute speech.

"We must also commit ourselves to providing the highest quality education for South Carolina's children if we are to continue to compete in the future for jobs and economic prosperity," he said on the Statehouse steps. "Being perceived as weak in education is not good. But, being perceived as not committed to fixing it is disastrous. We will fix it and we will keep winning."

Investments must be made in technical colleges and infrastructure in rural areas, he said, specifying that includes not just roads and utilities but school buildings.

He and the state's GOP leaders have pledged to overhaul South Carolina's education system in the wake of The Post and Courier's Minimally Adequate series, which laid out how gaping disparities have left thousands of students unprepared for college or the modern workforce after high school.

Though legislation is still in the works, House Republicans have signaled their push will include helping poor, rural school districts renovate and build schools, as they lack a local tax base and simply can't afford to do so on their own.

While reiterating the state's successful recruitment of industries to South Carolina, McMaster recognized economic prosperity has largely bypassed the state's rural areas, which are losing population as young people graduate and never move back. There's nothing to keep them there other than family, McMaster said. He committed to changing that.

"That is what we intend to do: Change everything. My pledge to you today is that the words 'Corridor of Shame' will soon be a fading memory," he said, referring to the moniker given to the rural swath along Interstate 95 by a 2005 documentary on the plight of rural schools.

The comment brought a round of applause — among eight times he was interrupted by applause.

Another moment came when he called for assembling the country's best teachers and increasing teachers' salaries high enough to do so. South Carolina's been chasing the Southeastern average for decades. Bringing it to that threshold next school year would take $155 million. McMaster said salaries need to be high enough to compete with salaries around the country.

But he wants to save South Carolinians money. The governor championed the state Chamber of Commerce's push for tax reform, saying that keeping South Carolina competitive for jobs will require reducing income and corporate taxes. The chamber has presented "revenue neutral" ways to overhaul the tax code without raising or reducing the state's overall collections.

State economists predict legislators will have an additional $1 billion to spend in the upcoming state budget — half of that from surpluses meant for one-time expenses such as infrastructure and maintenance. Existing maintenance needs on state buildings alone top $2 billion.

"Surpluses in state government revenues don't mean we have to spend it all. It means prioritizing the most critical needs, then rebating what's not needed back to the taxpayers," McMaster said. "That's what I intend to do."

He has more opportunities to specify how he would do that. The Republican governor is expected to issue his proposed budget for 2019-20 next week. And he will give a State of the State address later this month.

Wednesday was about broad agendas and celebration. The day's festivities began with a prayer service at McMaster’s own church, Columbia’s First Presbyterian.

Though McMaster is beginning his third year in office, it's his first after voters elected him to a full-term. The then-lieutenant governor ascended to the role in January 2017 after Nikki Haley resigned to be President Trump's United Nations ambassador.

Haley was among all living former governors at the event, with the exception of 97-year-old Fritz Hollings.

McMaster's speech began with a nod to him achieving what he's worked for his entire political life. The former state Republican Party chairman and two-term state attorney general has wanted to be governor since President Ronald Reagan appointed him South Carolina's U.S. attorney in the early '80s.

"Words cannot express the pride and joy I have to be the governor of the great state of South Carolina," he said.

Jamie Lovegrove contributed to this report.