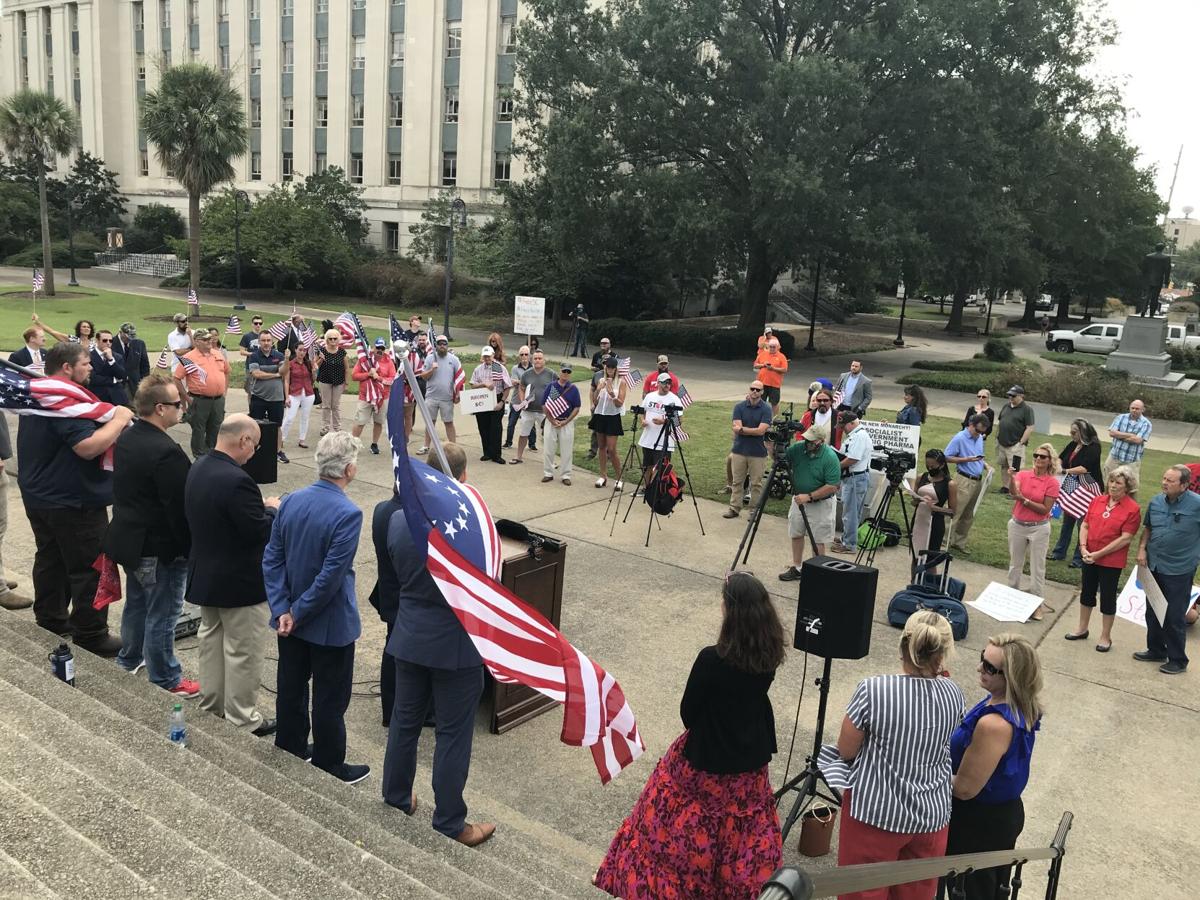 About 75 people gathered at the S.C. Statehouse on Tuesday, Sept. 15, 2020, to demand lawmakers at all levels ease face covering and social-distancing mandates. Adam Benson/Staff 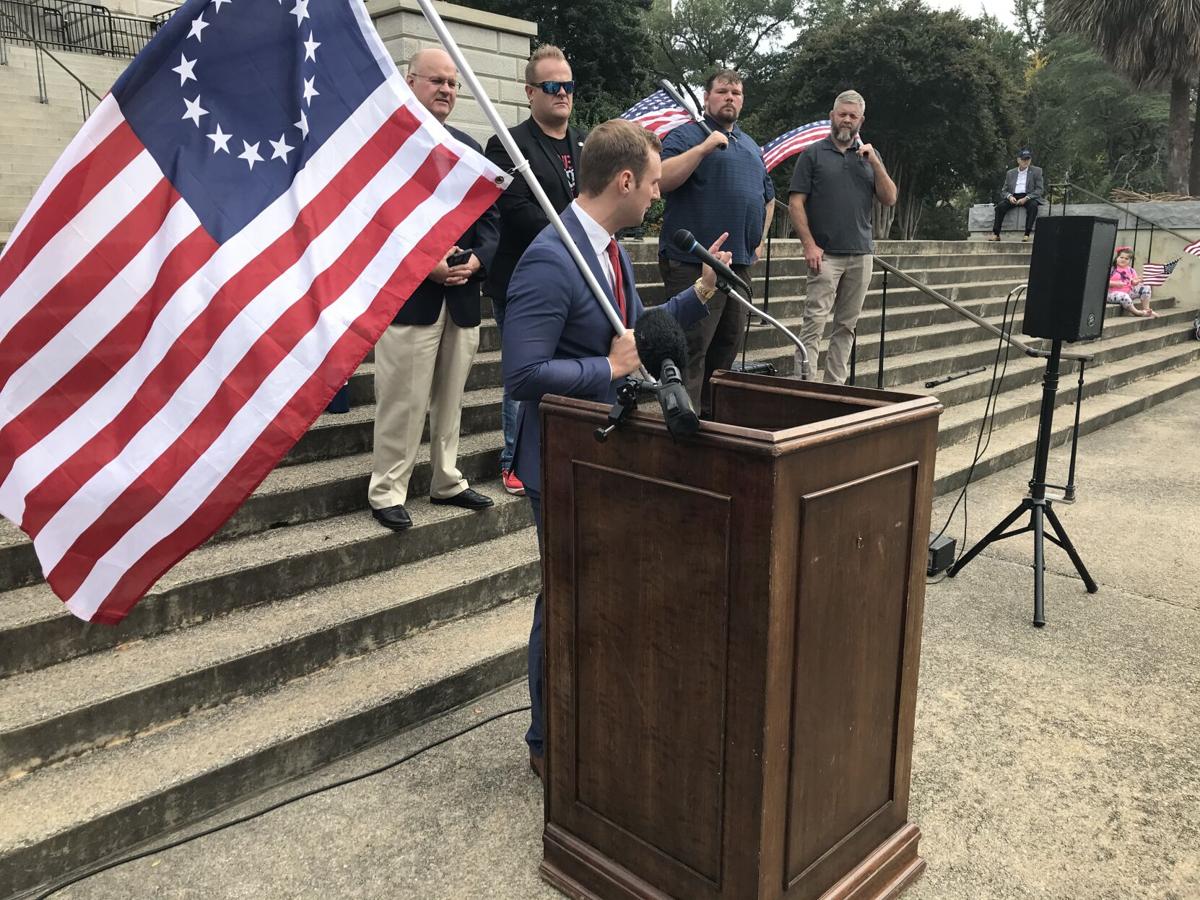 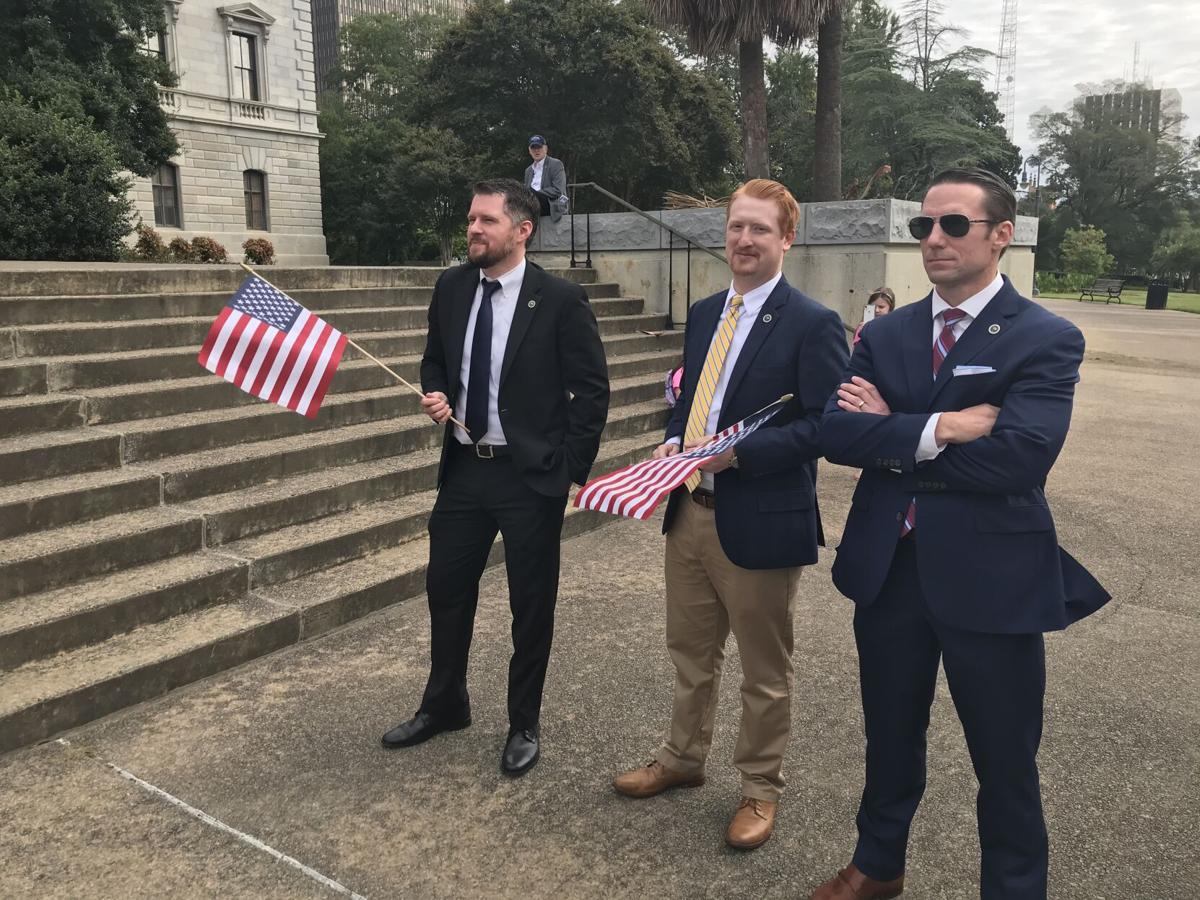 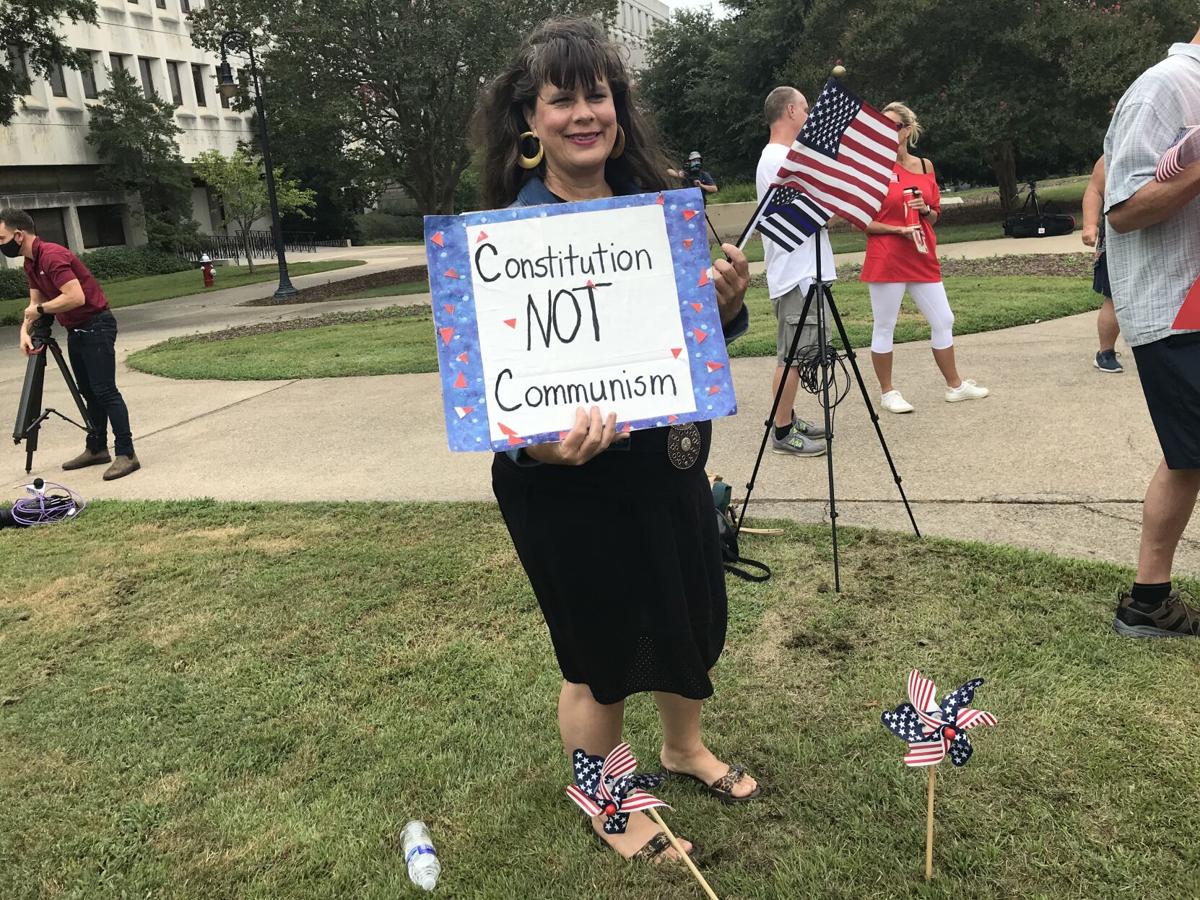 About 75 people gathered at the S.C. Statehouse on Tuesday, Sept. 15, 2020, to demand lawmakers at all levels ease face covering and social-distancing mandates. Adam Benson/Staff

COLUMBIA — Some 75 protesters came to the S.C. Statehouse on Tuesday arguing that city and county mask mandates to curb the spread of the coronavirus are a breach of constitutional rights and a show of political cowardice.

They demanded an end to restrictions from Gov. Henry McMaster, the General Assembly and local elected officials.

“We’re into our sixth month and people are suffering. Jobs have been lost. Businesses have been closed, never to reopen again," Greenville Tea Party chairman and organizer Pressley Stutts said. “We are here to say to our legislators, ‘Grow a spine.’ ”

More than 70 cities and counties have passed mask ordinances, covering about 40 percent of the state’s population. Masks also are required in all state government buildings, but there is no statewide mask order.

None of the protestors wore face coverings during the hourlong event, disregarding a public health guideline laid out by the U.S. Centers for Disease Control and Prevention that was included in the state-issued permit for the rally.

Dubbed #OPERATIONFREESC, the event drew people from across the state to the south steps of the Capitol, where they questioned COVID-19 disease rates reported by the S.C. Department of Health and Environmental Control and insisted mask ordinances are simply governmental overreach.

Among those in attendance were Republican state Reps. Stewart Jones of Laurens, Josiah Magnuson of Spartanburg and Bobby Cox of Greer. Organizers of Tuesday’s rally included groups calling themselves REOPEN SC MAGA 2020, SC Patriots for Liberty and Overwatch USA.

Chad Caton, a Myrtle Beach media personality, compared those in attendance on Tuesday to “the three percenters,” a reference to the idea that just 3 percent of colonists fought against the British during the Revolutionary War.

The Southern Poverty Law Center classifies the “Three Percenters” as one of 612 groups belonging to the “extreme anti-government movement.” Caton said he has no affiliation with the "Three Percenters" movement and was referring only to the historical context.

“The new norm is something that isn’t what this country was founded on. This virus is nowhere near as bad as the cure, and we need to stop the cure because it’s not working,” Caton said. “We don’t want a new norm, we want the norm.”

Protesters also called for a statewide return to five-day-a-week classroom learning, which is backed by McMaster.

Students are being stripped of their ability to socialize and receive the intensive instruction they need from in-person learning, said Ashley Martin, a Travelers Rest High School teacher running for a seat on the Greenville County School District’s board of trustees.

With two American flag pinwheels at her feet and holding a small one in her right hand, Michelle Sarbaugh of Greenville clutched a sign in the other that read “Constitution NOT Communism."

Another man raised a placard proclaiming “This was NEVER a Pandemic!!! #OpenSC”

As of Monday, the coronavirus has infected more than 130,000 South Carolinians and killed almost 3,000. Speakers pointed to the many people who recover from the virus as evidence that lawmakers are ignoring the will of some of their constituents, who want to see life resume as it had prior to the pandemic.

Tom Dunn of Pawleys Island opened his remarks by reciting the oath of office.

“In your heart, do you believe that Gov. McMaster has kept his oath to you?” Dunn asked.

“No!” the crowd responded.

Lawmakers “have exhibited an unwillingness to confront those who would stomp on our liberties, all in the name of a little bit of perceived safety,” Dunn said.

Magnuson told reporters on Tuesday after the rally that he planned to support a non-binding measure approved by the Senate in May requiring McMaster seek legislative permission beyond an initial state of emergency in March. The state remains under a state of emergency.

By law, emergency orders issued by a governor can last up to 15 days, but an April opinion from the state’s Attorney General’s Office concluded a new declaration of emergency can be declared “based upon new facts and circumstances and new threats perceived at that time.”

McMaster has issued 13 states of emergency between March 13 and Sept. 9.

“I don’t agree with the way that that we have continued to extend the state of emergency over and over. I think the Legislature needs to have stood up and ended it,” Magnuson said. “I also don’t want to continue these restrictions more than what’s necessary. When we continue these states of emergency, we send a message to South Carolina that we need to keep being afraid.”

In response to a Post and Courier request for comment following Tuesday's rally, Brian Symmes, McMaster's spokesman, said, "The governor's criticized by some for the state being open and by others for the state being shut down. Obviously, both can't be true. South Carolina is open for business with some important measures in place. But we certainly appreciate South Carolinians exercising their rights to make their concerns known."

Clarification: This story has been updated to reflect that Chad Caton has no affiliation with the "Three Percenters" movement.

Clemson football, a mask ordinance and student resistance: 'This is sooo dumb'