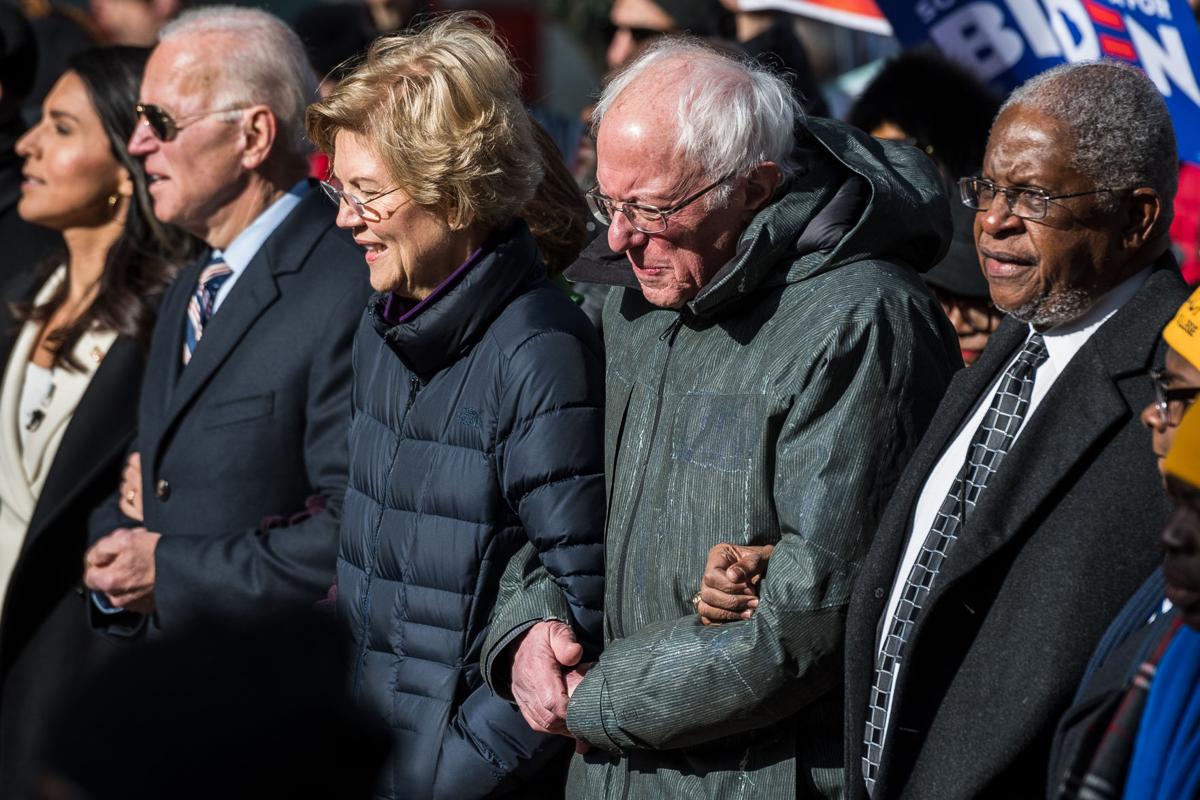 Presidential hopefuls Rep. Tulsi Gabbard, former Vice President Joe Biden, Sen. Elizabeth Warren and Sen. Bernie Sanders march to the steps of the South Carolina Statehouse for the annual King Day at the Dome rally on Jan. 20, 2020. John A. Carlos II/Special to The Post and Courier 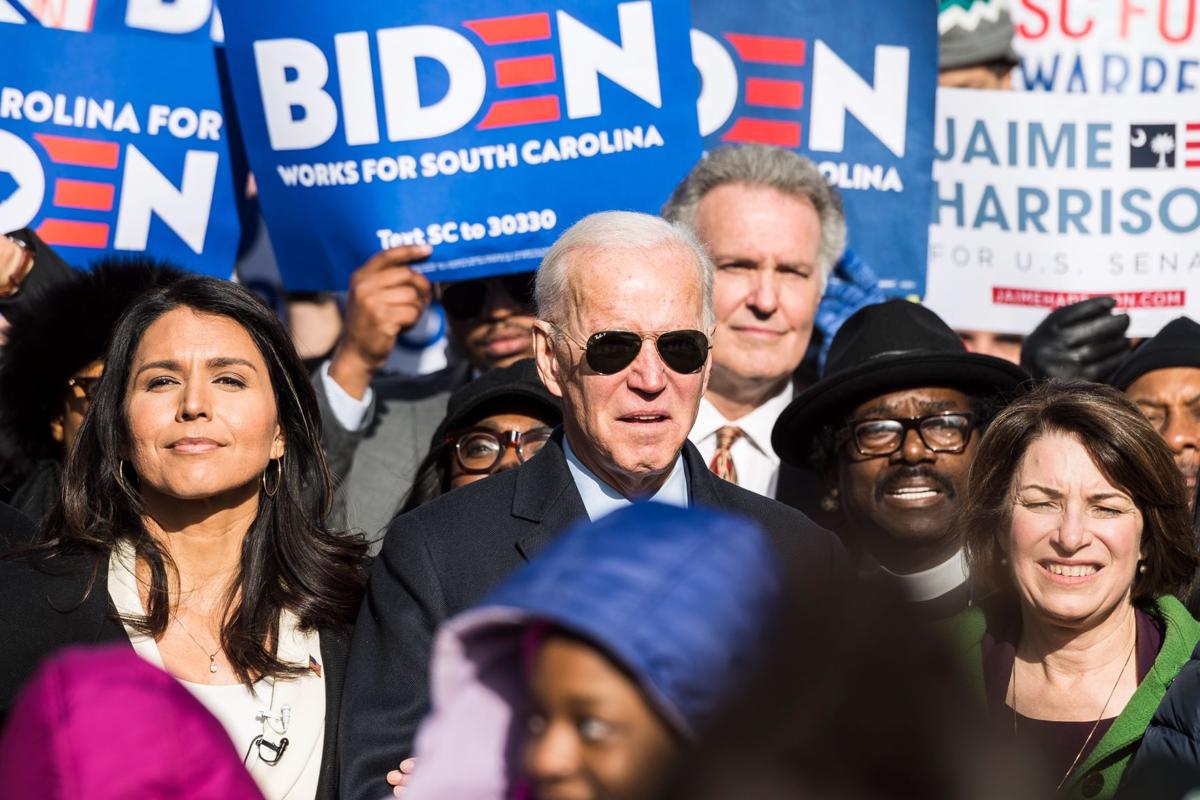 Presidential hopefuls Rep. Tulsi Gabbard, former Vice President Joe Biden and Sen. Amy Klobuchar march with hundreds of activists to the South Carolina Statehouse for the annual King Day at the Dome rally on Jan. 20, 2020. John A. Carlos II/Special to The Post and Courier 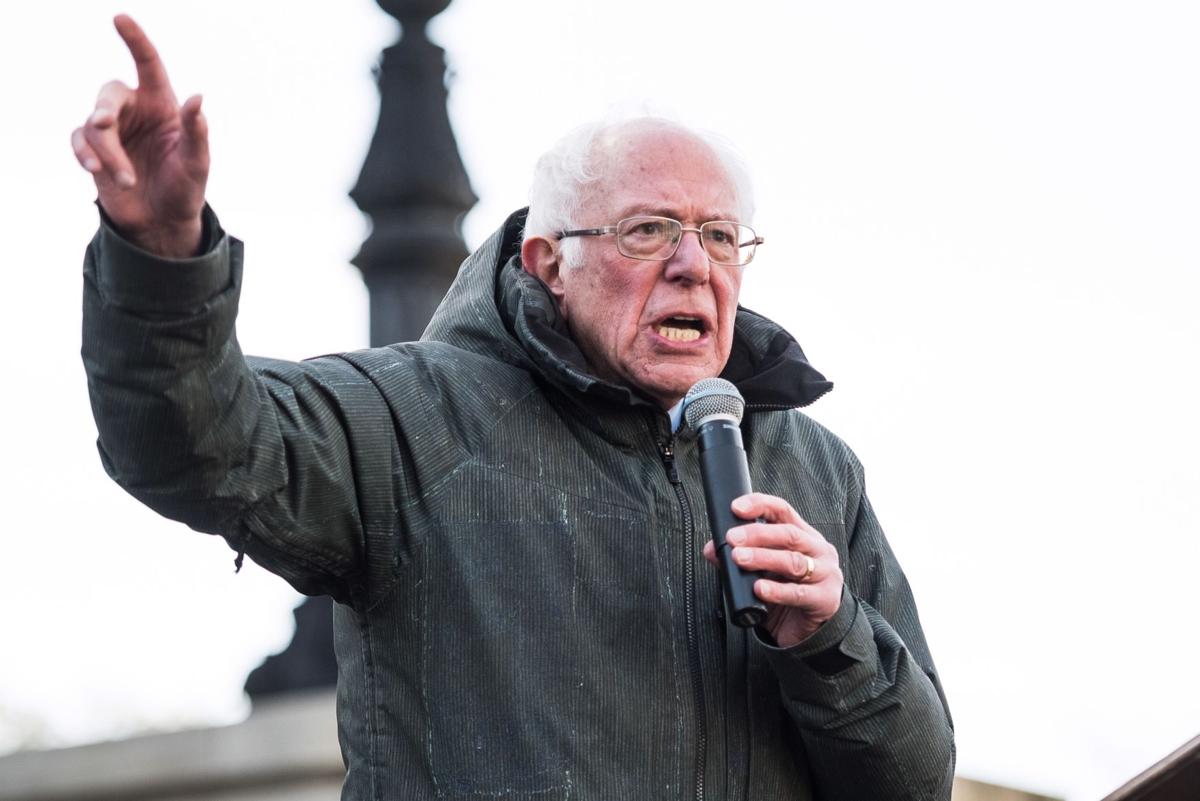 Sen. Bernie Sanders speaks to thousands gathered at the South Carolina Statehouse for the annual King Day at the Dome rally on Jan. 20, 2020. John A. Carlos II/Special to The Post and Courier 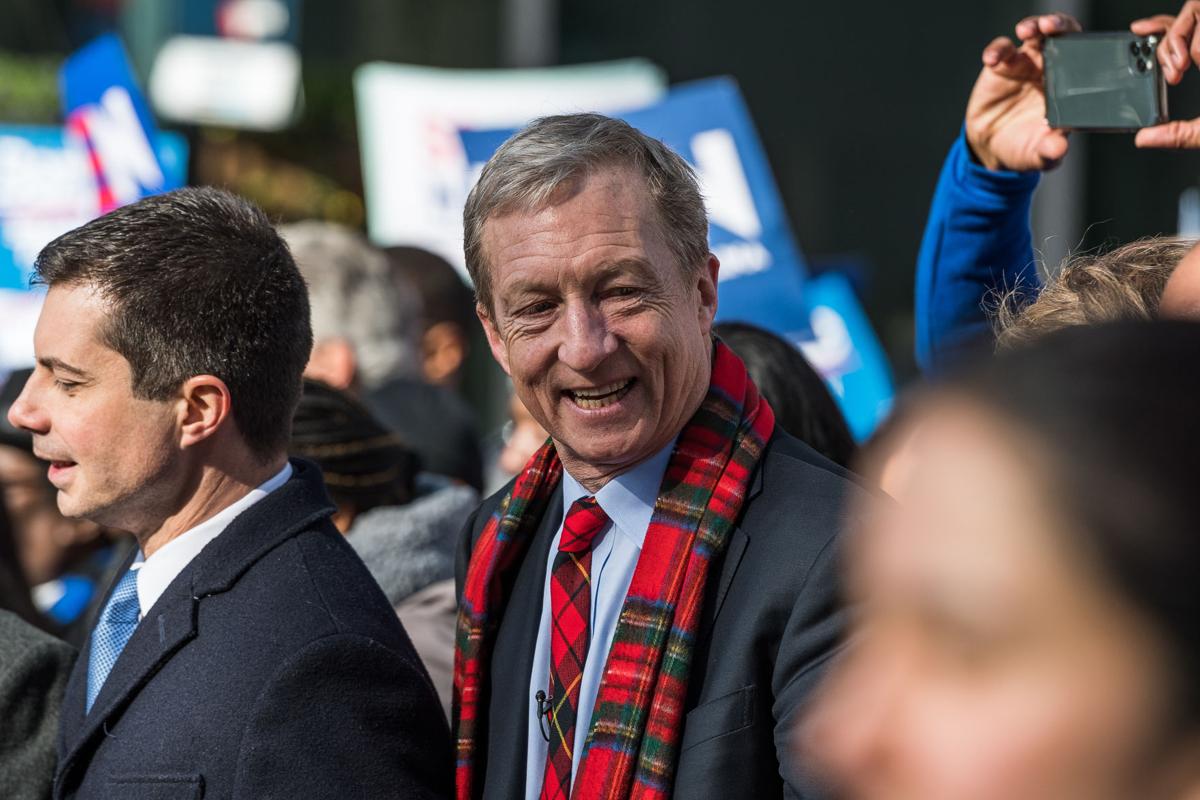 Presidential hopefuls Indiana Mayor Pete Buttigieg and billionaire businessman Tom Steyer march to the South Carolina State House for the annual King Day at the Dome rally on Jan. 20, 2020. John A. Carlos II/Special to The Post and Courier

COLUMBIA — Hundreds of South Carolinians and eight Democratic presidential candidates marched arm in arm Monday to the feet of the Statehouse steps to celebrate the legacy of Dr. Martin Luther King Jr., seeking to reframe his struggles through the lens of modern politics.

The annual King Day at the Dome, which began as a protest 20 years ago when the Confederate flag was still flying atop the Statehouse's copper-covered cupola, has since become something of a rite of passage for any Democratic contenders hoping to make their way to the White House.

Given the large field of candidates and South Carolina's role as the first early-voting primary state with a sizable African American population, Monday's ceremonies offered a particularly crowded stage as the candidates clamored to lay claim to the mantle of racial justice.

The day marked the first time since the S.C. Democratic Party convention and U.S. Rep. Jim Clyburn's "world famous" fish fry over the summer that South Carolina had commanded such outsized attention in the political universe.

With eyes now turning towards the first contests in Iowa and New Hampshire, Monday will also likely represent the last time the Palmetto State will dominate national political headlines until a Democratic debate broadcasts from Charleston a few days before the S.C. primary on Feb. 29.

It has become such a crucial event that one candidate, former Mayor Pete Buttigieg of South Bend, Ind., even changed his earlier plans of spending the day in his hometown at the last minute to make it to at least a portion of the Columbia events.

Though Buttigieg had to leave before getting an opportunity to address the crowds at the Statehouse, he did speak briefly at the Columbia Urban League's annual MLK Day breakfast attended by several other candidates in West Columbia before the march.

Buttigieg told the Urban League he was "mindful that we gather in the state where your efforts brought down a banner of bigotry from the Statehouse and showed a beacon for the rest of the country, as well.

"It gives us hope," Buttigieg said.

Jaime Harrison, the Democrat challenging U.S. Sen. Lindsey Graham this year, said the day was supposed to be less about politics and more about reflecting on King's approach.

But with the Feb. 29 South Carolina Democratic presidential primary on the horizon, many of the candidates could not help but inject overtly political rhetoric into their brief speeches before the masses.

U.S. Sen. Bernie Sanders of Vermont argued that King's "revolutionary" style is often overlooked, and he called on renewing that approach to oppose voter suppression, militarism and wealth inequality.

"He took on the entire political establishment, he took on the economic establishment and he fought racism every step of the way," Sanders said of King. "And our job is not just to remember the history of Dr. King, it is to absorb his revolutionary spirit and apply it today."

"Hate never goes away, it only hides," Biden said. "If you give it oxygen, as Trump has done, it only comes back."

U.S. Sen. Elizabeth Warren of Massachusetts said the fight that King led against racial and economic justice continues long after his passing, calling the current state of politics "a moment of crisis."

Billionaire businessman Tom Steyer, surrounded on stage by black staffers and supporters of his campaign, told the crowd that he supports paying reparations to the descendants of slaves and he believes systemic racism remains a pressing issue in America decades after King's death.

"When you look at the policy issues that the presidential candidates are addressing, you can't look at any of those issues without realizing that there's an underlying point about race in every one," Steyer said, specifically noting criminal justice, education and environmental justice.

Other contenders addressing the crowd — much of whom stayed in place despite the frigid temperatures — included U.S. Rep. Tulsi Gabbard of Hawaii, U.S. Sen. Amy Klobuchar of Minnesota and former Massachusetts Gov. Deval Patrick.

Attendees offered conflicting views of the propriety of the candidates' focus on electoral politics at an event ostensibly intended to pay respects to a historical figure.

Miriam Johnson, a longtime Elizabeth Warren fan, said she felt it was important for the candidates to come to King Day at the Dome because the two earliest states in the nominating calendar, Iowa and New Hampshire, are overwhelmingly white.

"They really need to be in South Carolina. These people need to talk to black people," said Johnson.

Jennifer Booker of Aiken said she’d prefer the candidates not be there at all.

Booker who brings young people to the Statehouse with the NAACP Youth Council, said she wants them to hear the message of Martin Luther King Jr. and what he stands for — freedom and a united society not divided by wealth, poverty or color — “not these guys.”

"They should pick their own time to come, not piggyback on this," Booker said. "I don’t want our youth to think it’s about politics."

Booker said she hasn’t decided who to vote for, adding the candidates "each have said good things."

Colin Welch, on the other hand, said it’s important, "especially given today’s political climate," to listen to the candidates. The Columbia resident remains undecided.

“I use this forum to help me make up my mind," he said.

Earnest Jones of Columbia, who retired from the Army after 27 years, said he’s been at every King Day, but he felt it particularly important to attend this year.

"We’re at a time where we need to vote," Jones said. "Our votes matter. Our voice matters. And this is needed because we need a drastic change right now."

Biden, Bernie and the billionaires: State of a changing 2020 SC primary race