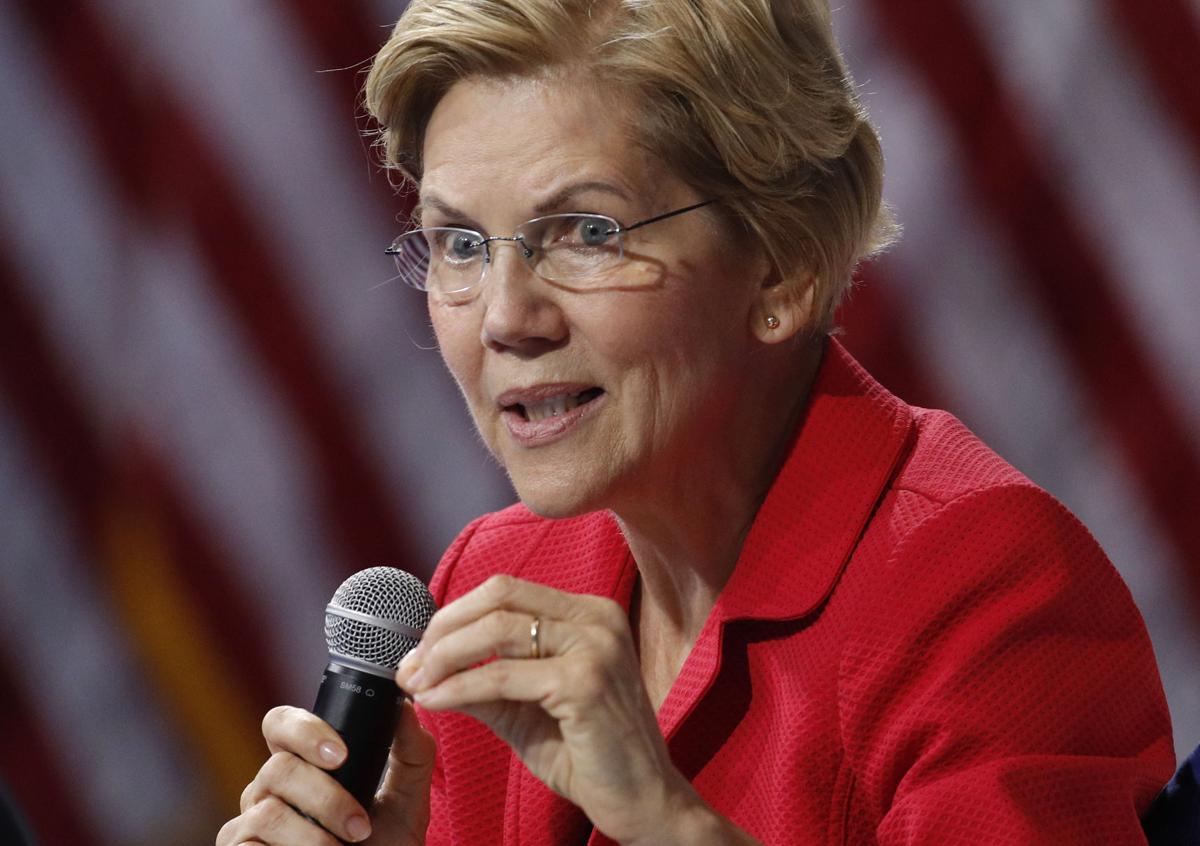 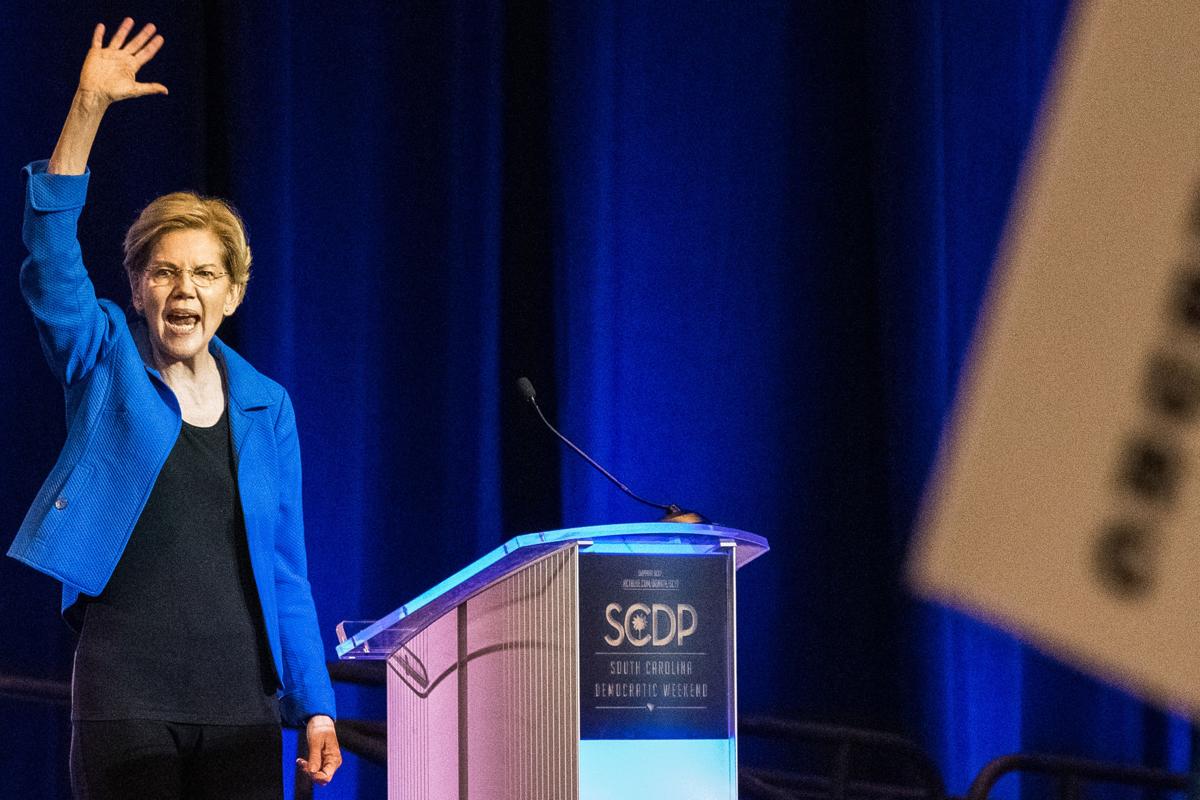 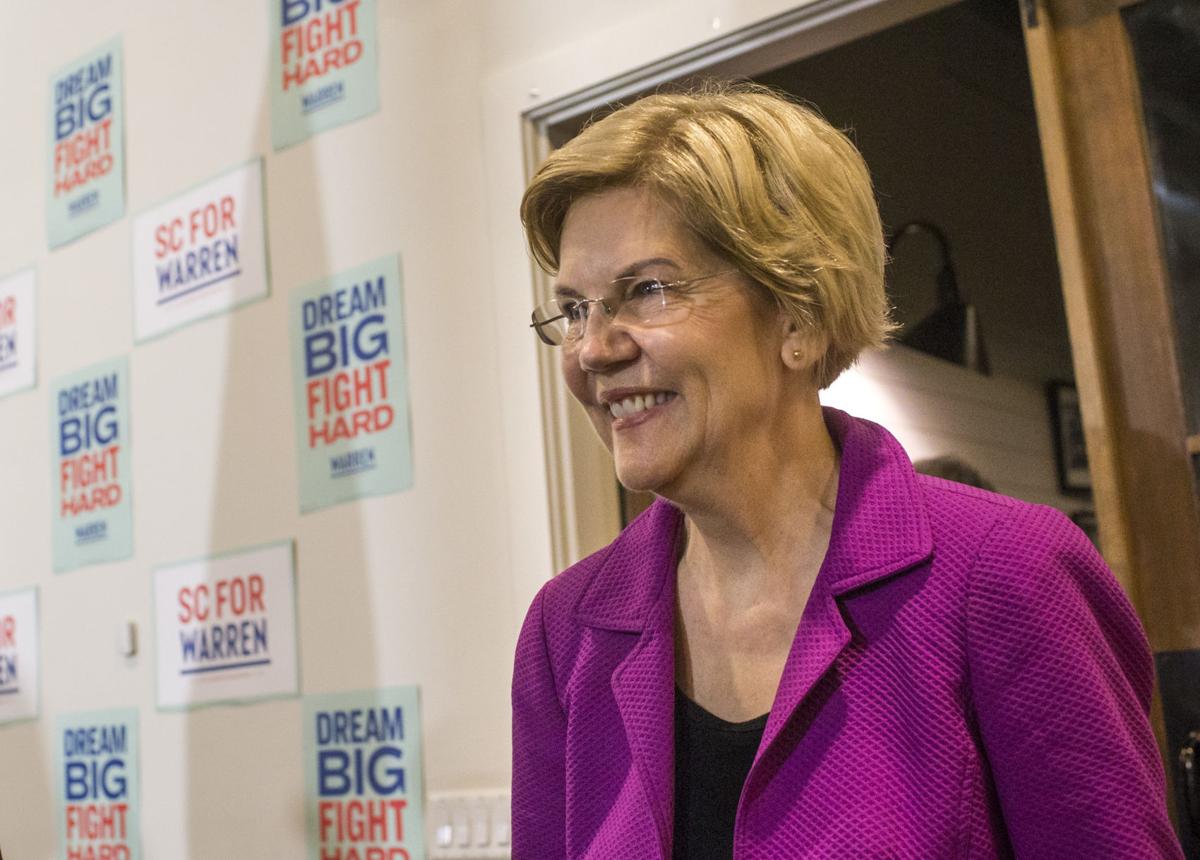 Democratic presidential candidate Elizabeth Warren talks with members of the community about environmental justice, offshore drilling and other issues of acute interest to Lowcountry voters at The Schoolhouse in West Ashley on Monday, April 15, 2019. Andrew J. Whitaker/Staff

Democratic presidential candidate Elizabeth Warren talks with members of the community about environmental justice, offshore drilling and other issues of acute interest to Lowcountry voters at The Schoolhouse in West Ashley on Monday, April 15, 2019. Andrew J. Whitaker/Staff

For Elizabeth Warren, it was never going to be all about South Carolina.

From the beginning, her presidential campaign set its sights on running a 50-state strategy, which meant the Massachusetts senator would realistically be forced to split her time between the four early primary states every four to six weeks.

She hinted as much when she addressed the South Carolina Democratic Party convention in June.

"It's been about getting out and building a grassroots movement," Warren said, after noting she had held more than 100 town halls in 20 states and Puerto Rico.

"Because, come November 2020, if we want to beat Donald Trump, we need to build that grassroots movement starting right now," she added.

Now, 10 months into the race, her plan-centric and policy-heavy message is gaining traction.

She's rising in national polls. Selfie lines are forming wherever she goes. She can now say she has been to 27 states.

And during the latest Democratic presidential debate in Ohio, almost every one of Warren's challengers focused their attacks on her, all but signaling they see Warren — not former Vice President Joe Biden — as the front-runner.

But in South Carolina, it's a different story.

Warren has yet to secure any major endorsements here. Her visits have been sporadic at best.

When she participated in an environmental justice roundtable in Charleston's Rosemont neighborhood a few weeks ago, her campaign announced the visit with less than 24-hours notice.

The visit, which included a walking tour of the neighborhood, also never appeared on Mobilize America, a website that serves as a centralized system for Democratic and progressive campaigns to post about upcoming events.

When Warren was invited to speak at the Charleston County Democratic Party's Blue Jamboree, she declined, despite the urging of multiple South Carolina Democratic leaders.

The Warren campaign rebuts the assessment, noting they have more than 40 paid staffers on the ground and nine offices in eight cities across the state.

Warren has also participated in a number of flagship Democratic events in the state.

She was the only candidate who received a standing ovation in Charleston when she detailed her plans to close the black-white wage gap during the Black Economic Alliance Forum.

She called for big structural change when she took the stage at U.S. Rep. Jim Clyburn's World Famous Fish Fry in June.

At the South Carolina Democratic Party Convention, she said her wealth tax could fund a $50 billion investment in historically black colleges and universities.

Through October, Warren will have made 10 trips to South Carolina and held 17 stops in the state since January. But it's still the lowest visit count to the Palmetto State when compared with the top five candidates she's hoping to overcome in the race.

"If she doesn't start spending some more time in South Carolina — and I'm not talking about events that she creates. I'm talking about events like Blue Jam or the Shore Dinner in Horry County or some events in the Upstate," Robertson said. "If she doesn't start doing that, you're going to see the same articles written about her that you saw written about Bernie Sanders in 2016."

Sanders, who was then running against Hillary Clinton for the Democratic presidential nomination, struggled to connect with black voters in South Carolina and ended up leaving the state early, abandoning it to pitch his platform elsewhere in Midwestern states.

His loss in South Carolina turned out to be the death knell of his 2016 presidential bid, despite almost beating Clinton in Iowa and crushing her in New Hampshire.

"You can have the greatest staff in the world, but if your candidate doesn't show up, it really puts them in an awkward position here," Robertson said.

State Rep. Wendy Brawley, a black Richland County Democrat who endorsed Warren in July, said she believes Warren is on the verge of making a serious play for South Carolina. But she's going to need black voters like her to make it happen, Brawley added.

A candidate on the verge

A snapshot of Warren's standing in South Carolina hints at momentum in the making, polls show. A Post and Courier-Change Research survey of state Democrats in late October showed her cutting into Biden’s lead, but Biden still was way out front with a 30 percent following to Warren’s 19 percent.

A Monmouth University poll also in late October showed Warren has garnered the support of 16 percent of likely Democratic voters in South Carolina, which marked a 7-point increase since July. She trails Biden by 17 points in that one.

The numbers, though, do reveal there could be an opening for Warren to make inroads with black voters, who account for an estimated 60 percent of the state's Democratic primary voters.

Biden's numbers with African Americans appear to be sliding. Among black voters in South Carolina who named Biden as either their first or second choice, the poll showed Biden's standing fell by 10 points since July. It now sits at 52 percent.

Warren's numbers, meanwhile, more than doubled among black voters: Rising from 11 percent to 26 percent during the same time.

Brawley, who joined Warren at Reid Chapel AME Church in Columbia two months ago, said she's seen Warren connect with black voters and believes that if Warren commits to visiting the state more that she will gain support.

Warren's message is also more progressive, laying bare an ideological split in the party as to whether Democrats should adopt more left-leaning policies or embrace a more moderate platform if they hope to defeat President Donald Trump.

Warren's proposed wealth tax on the mega-rich, which calls for a 2 percent annual tax on those whose wealth exceeds $50 million, is the key to funding the vast majority of the social programs she's proposing, like universal child care and free college tuition.

She is also one of three candidates pitching a strict Medicare for All plan.

Warren supporter Andrew Wynkoop, a 21-year-old Furman University student who is leaning toward Warren despite gravitating toward Sanders in 2016, said he has been impressed most by Warren because she has detailed plans.

But he cringed during the last debate when she refused to say whether taxes would increase under a Medicare for All plan.

"The more she evades the question, the more skeptical I become of her authenticity in believing in that plan," he said. "I envision myself eventually supporting Warren over anyone else, so I'm holding her to a standard where she needs to show me that I can do that. I really want to support her more than Bernie, but I need a little more convincing."

Elliott McCarthy, 29, of Spartanburg, showed up early for a town hall Warren held in Rock Hill, and stayed late. He waited in line for more than an hour to get a photo with Warren. It is now his Facebook profile picture.

While McCarthy said he wants Warren to visit South Carolina more, he said he trusts that Warren's message will begin to resonate even when she's not around.

"People in South Carolina just aren't aware of who she is yet, but what I've noticed is that once people start talking about their issues and then learn what Senator Warren's stances are, they go, 'Wow, I could really get behind that.' It's like you can see people changing a little bit."

The question now is whether it will work in time for the Feb. 29 primary.