The groups argue the requirement has an unconstitutional chilling effect on potential voters who are concerned about sharing Social Security numbers, something that is mandated in only four states nationwide.

Most states ask only for the last four digits of voters' Social Security numbers or other identifying information.

The federal lawsuit filed Monday comes as Democrats are working to sign up some of the estimated 950,000 eligible South Carolina residents who had not registered to vote as of 2018. For comparison, about 1.7 million people in South Carolina voted in the state's 2018 elections.

No voting problems, but some confusion reported around Charleston on Election Day 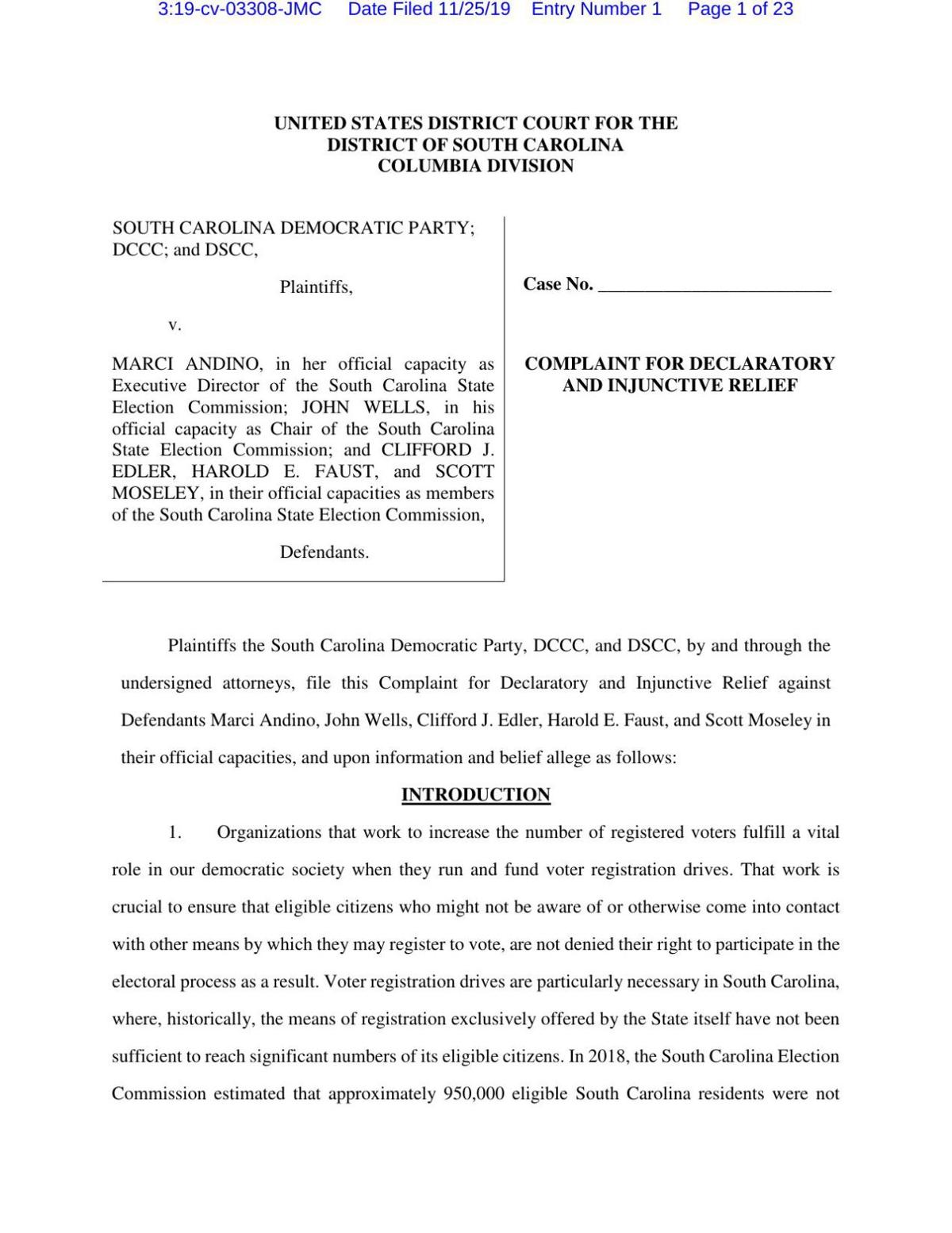 The lawsuit, filed in the U.S. District Court of South Carolina, argues the requirement violates First and Fourteenth Amendment rights to engage in the political process.

The plaintiffs also contend the requirement contradicts the Civil Rights Act, which says people cannot be denied the right to vote for not providing information "if such error or omission is not material in determining whether such individual is qualified under State law to vote in such election."

The public's caution over Social Security numbers prompted the U.S. Census Bureau to drop a previous requirement for census respondents to provide it in hopes of increasing response rates.

The groups named state Election Commission Executive Director Marci Andino and members of the commission in their official capacities because they are tasked with enforcing the Social Security number requirement.

South Carolina is the only state the groups are suing at this time.

Chris Whitmire, a spokesman for the S.C. Election Commission, said the agency does not comment on pending litigation.

The plaintiffs say the issue is a blend of privacy and the right to vote.

“Voters shouldn’t have to choose between protecting their privacy and participating in our democracy,” said U.S. Sen. Catherine Cortez Masto, D-Nev., the DSCC chairwoman. “We’re challenging this risky and unnecessary requirement because we stand firm in our commitment to making it easier, not harder, for Americans to vote.”

The effort did not earn support from S.C. Republicans, however, who framed the lawsuit as an attempt by Democrats to "change the rules because they know they can't win at the ballot box."

While the lawsuit is playing out in court, state Rep. JA Moore, D-North Charleston, said he plans to file a bill for the upcoming Statehouse session to remove the Social Security number requirement by legislation. He plans to ask House Speaker Jay Lucas, R-Hartsville, to support the effort.

"Intentionally or not, it's caused voter suppression," Moore said of the requirement. "What we're going to find out is how committed the General Assembly leadership is on actually allowing more people to register to vote and to vote."