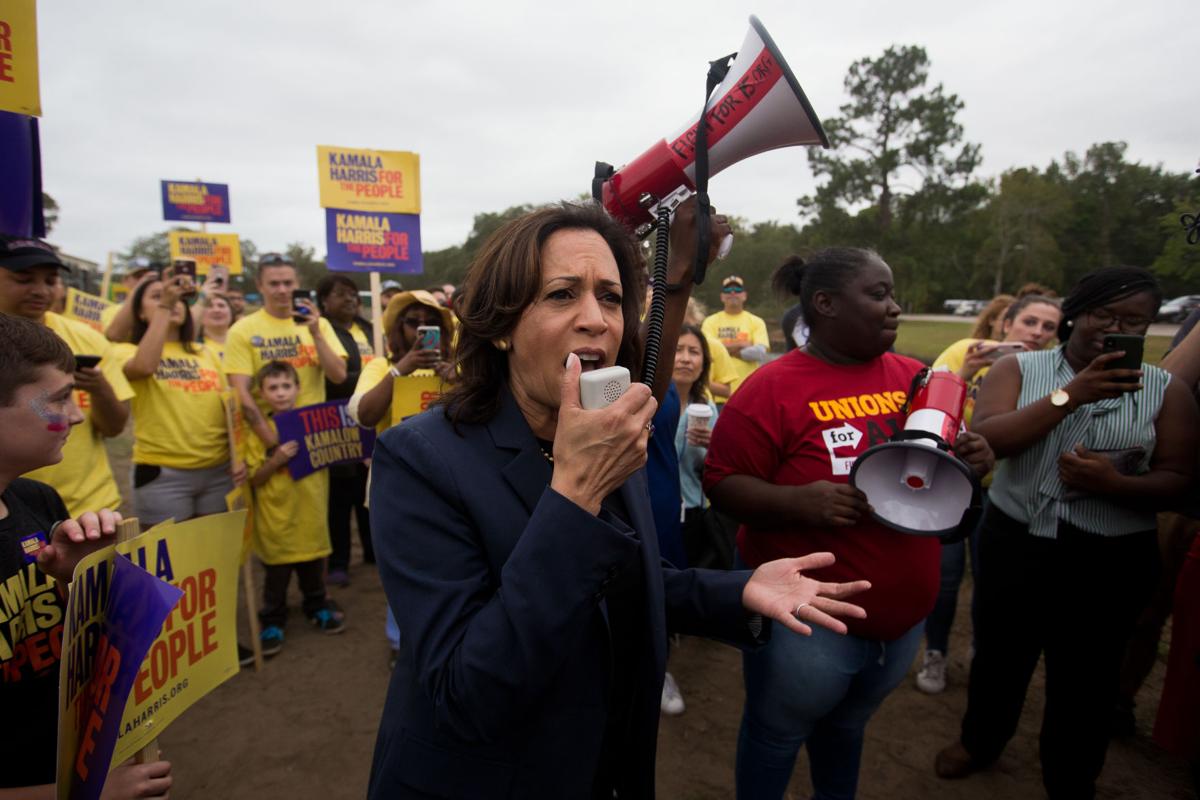 Presidential candidate Kamala Harris talks on a megaphone with supporters at the Charleston County Democratic Party Blue Jamboree on Saturday, Oct. 5, 2019 at The Bend in North Charleston. Andrew Whitaker/Staff 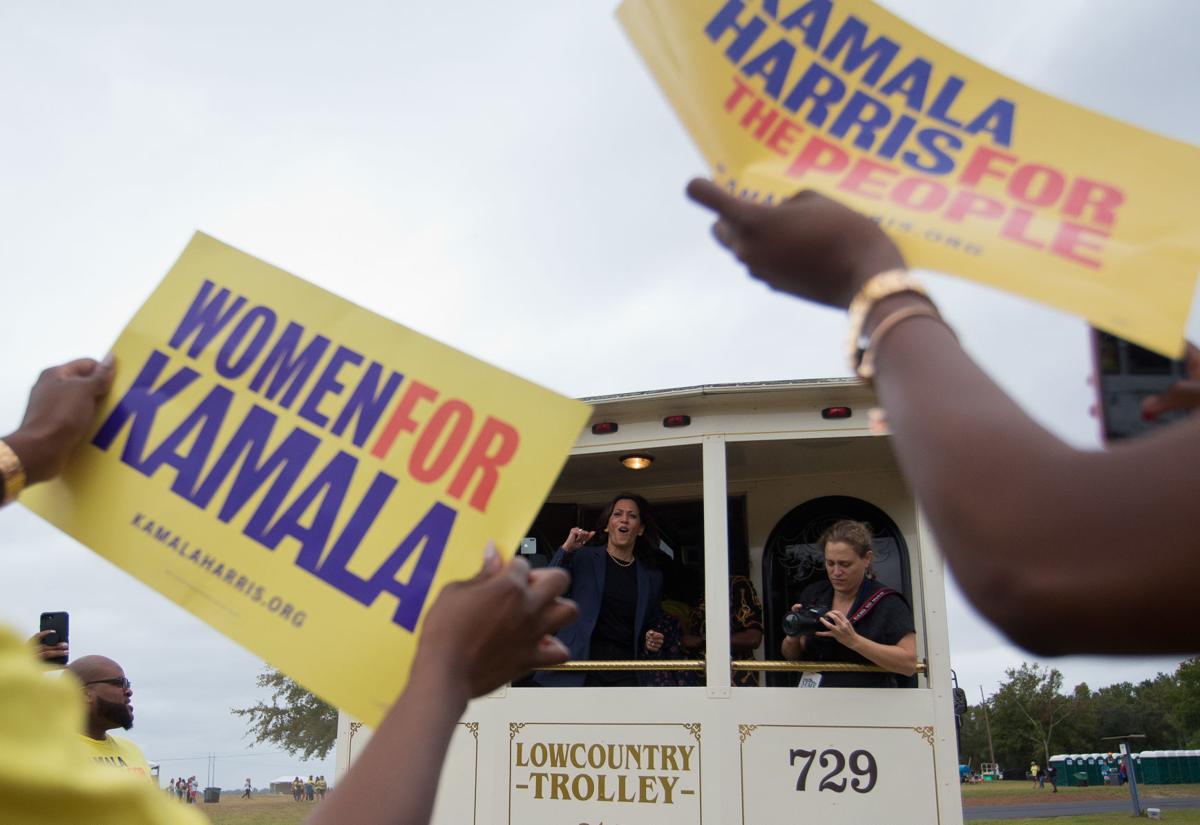 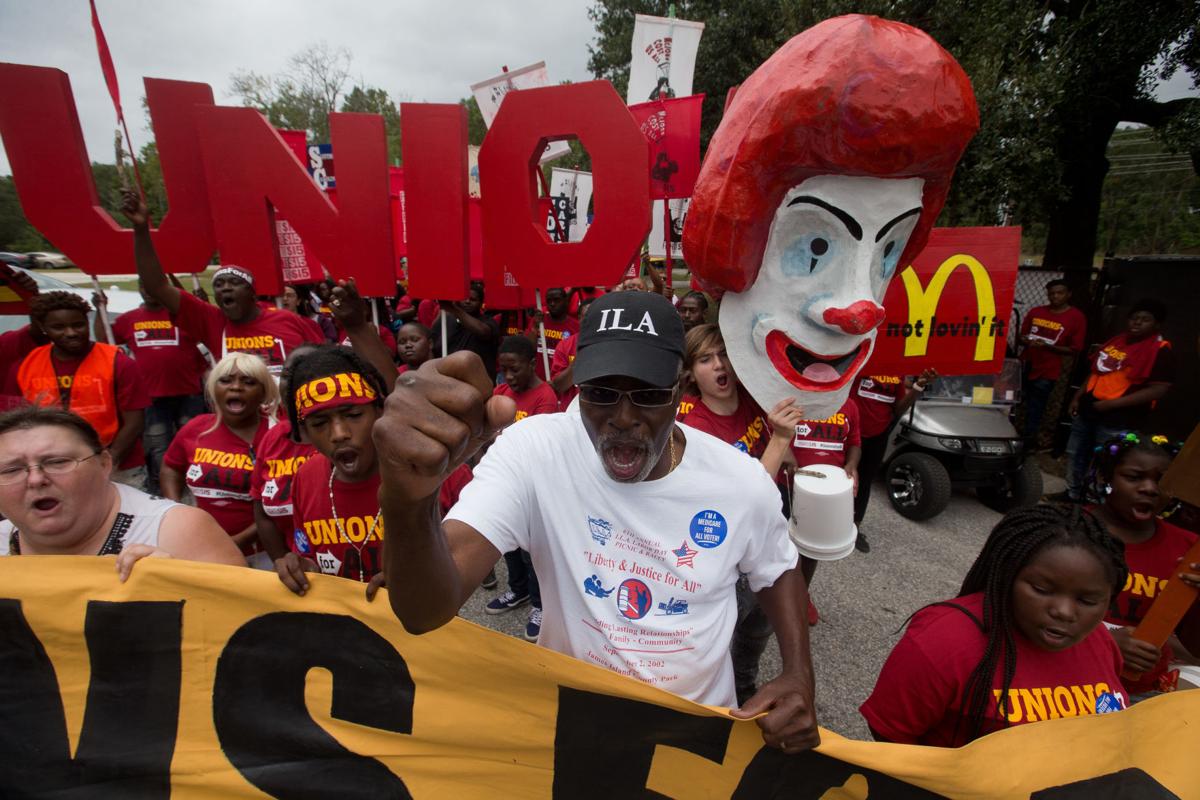 The Fight for 15 unions for all group chant and wait for Sen. Kamala Harris at the Charleston County Democratic Party Blue Jamboree on Saturday, Oct. 5, 2019, at The Bend in North Charleston. Andrew Whitaker/Staff

Presidential candidate Kamala Harris talks on a megaphone with supporters at the Charleston County Democratic Party Blue Jamboree on Saturday, Oct. 5, 2019 at The Bend in North Charleston. Andrew Whitaker/Staff

The Fight for 15 unions for all group chant and wait for Sen. Kamala Harris at the Charleston County Democratic Party Blue Jamboree on Saturday, Oct. 5, 2019, at The Bend in North Charleston. Andrew Whitaker/Staff

Some went for the flashy entrance. Others opted for an abbreviated stump speech.

Back in South Carolina, Kamala Harris affirms state's importance to her 2020 bid

The common theme: All seven of the Democratic presidential candidates who spoke to 3,000 of the party faithful Saturday derided the man in the White House.

California Sen. Kamala Harris captured the attention of most of the attendees at the Charleston Democratic Party's Blue Jamboree at The Bend overlooking the Ashley River.

She arrived on a trolley. She marched into the event arm in arm with North Charleston McDonald's workers as they protested for a $15 minimum wage.

When Harris made it onstage, the mayor of Georgetown, Brendon Moses Barber, serenaded her by crooning "What a Wonderful World" by Louis Armstrong.

Harris, who consistently polls as one of the top five in the field of 19 contenders, stressed to the crowd the need to get President Donald Trump out of office. She called him "a walking indictment."

"Dude gotta go," Harris said, prompting cheers for the line that would later turn into a chant.

Bullock accused Trump of normalizing "the lies, the abuse of power."

"We now expect more out of our preschoolers than we do the president of the United States," he said, later characterizing Trump as "a lying con man from New York with orange hair and a gold toilet."

Gabbard, a combat veteran, never mentioned Trump by name but called for an end to division and said she would be a leader who put people over profit and politics.

Bennet called Trump "a clear and present danger to our democracy."

Candidates also sought to address any perceived trouble spots in their own bids as each addressed the crowd at intervals during the day-long event.

Harris explained why she pursued work in the criminal justice system. Before representing California in the U.S. Senate, she  was a prosecutor, district attorney and state attorney general. She has been questioned for her record on criminal justice issues since the launch of her presidential campaign.

"I've had only one client in my career, and it has been the people. And in the name of the people, then I will tell you I am prepared to take on Donald Trump and get him out of the White House," she said.

She also addressed whether she thought America was ready for a non-white female president.

"This is a conversation I have heard every single time I have, and here's the operative word, 'won,' " she said. "I share this with you not to share anything about myself, but to say everything about the American people because we have the ability to believe in what can be even if we've never seen it before."

The candidates who eclipsed her in that poll — former Vice President Joe Biden, Massachusetts Sen. Elizabeth Warren and Vermont Sen. Bernie Sanders — did not speak at the event. They sent surrogates instead.

Nina Turner, co-chair of Sanders' presidential campaign, did not mention the heart attack that took him off the campaign trail earlier in the week.

Bennet spoke after Turner, and sought to draw a contrast to the left-leaning candidate.

Noting that while there were voters who backed Barack Obama twice, but later sided with Trump, Bennet said Democrats need to address why those Americans thought Trump's plans would work for them.

"Our answer to that doesn't have to be some radical plan that is inconsistent with American values," he said. "I think Americans are too smart for that. I think they've seen that movie before and that's not what they want."

Bennet was the only candidate who took questions from the audience. He acknowledged the role African Americans played in America's ongoing history. He called Frederick Douglass, Harriet Tubman and activist Bree Newsome — the woman who was arrested for removing the Confederate flag from the South Carolina Statehouse grounds — "founders."

Bullock, the Montana governor, was the first 2020 presidential candidate to address the crowd.

"We need to win  back places like Michigan, Wisconsin and Pennsylvania. The path to victory not only affects the White House, but it affects your statehouse, and we need to be fighting damn hard for both of them," he said.

Steyer, who has made impeaching Trump the centerpiece of his campaign, entered the event with a marching band from Benedict College. The move was straight out of Harris' playbook after she entered the South Carolina Democratic Party Convention earlier this year with a drumline.

Despite momentary confusion from some attendees in the crowd who thought the marching band signaled Harris was going to take the stage, Steyer used all of his allotted 20 minutes to clear up any question about who he was.

"When you see something deeply wrong at the heart of your society, you're supposed to fight it every day," Steyer said. "That’s why I started Need to Impeach, because there are no good Nazis."

Gabbard was set to take the stage after Harris, but when Harris left, so too, did many attendees. Many wore the mustard yellow "Kamala for the people" T-shirts.

The exodus prompted emcee Nina Sossamon-Pogue to grab the mic.

"Stick around," she urged the departing crowd, before introducing Gabbard moments later.

By the time Delaney and Yang took the stage in the late afternoon, the crowds had thinned.

As the day-long event went on, people were encouraged to vote in the Palmetto Poll.The unscientific survey was a Southern take on the Iowa State Fair's famous corn kernel vote. Instead of corn kernels, Blue Jamboree attendees picked the candidate of their choice by dropping a black-eyed pea into a Mason jar.

Shortly after 5 p.m. the results came in: Warren, who did not attend the event, received the most kernels, but Harris came in second.

Seven Democratic presidential candidates descend on the Lowcountry this weekend, where they plan to make their pitch at the Charleston County …

Steyer's deputy S.C. state director Dwane Sims used his access to a voter file as a former S.C. Democratic Party staffer to export the valuable data and was promptly caught by the Democratic National Committee. The Steyer campaign said it was inadvertent.