COLUMBIA — A day before the University of the South Carolina board planned to vote for a new president who has generated controversy on campus, a state judge told the college to hold off after a trustee complained the school violated state meeting laws.

USC board member Charles Williams won a temporary restraining order Thursday because the board was not notified of the special meeting five days ahead of time.

In April, the board passed on Caslen, the front-runner among four presidential finalists, after protests over the former West Point superintendent's lack of experience and personal skills.

Williams' complaint filed by Columbia attorney Joe McCulloch said holding a board meeting without the legally required notice period would harm the university by "casting doubt on the legitimacy" of a vote for a new president. A meeting notice included in the filing asks board members to "maintain confidentiality" about the gathering to choose a new leader at the state's largest college.

USC canceled the meeting after the order was issued. A court hearing is scheduled July 19 in Columbia before Judge Robert Hood, who issued the order.

Caslen was expected to have enough board votes to succeed the retiring Harris Pastides. Williams, who opposes the three-star general taking over USC, said he hopes trustees use the delay to reconsider their vote, especially with concerns that McMaster's lobbying and plan to chair the board meeting could damage USC's accreditation.

A top official with the Southern Association of Colleges and Schools, which bans political influence in school management, told The Post and Courier this week that McMaster's involvement in the presidential  vote "raises concerns.”

"This has become so political," said Williams, an Orangeburg attorney. "The governor is endangering us. It's careless, uncalled for and reckless."

As the court order was issued, McMaster was preparing to send a letter to USC board chairman John von Lehe asking that he postpone the meeting to allow for proper notification time and avoid any unnecessary distractions, said Brian Symmes, the governor's spokesman. Earlier Thursday before the court order, Columbia Mayor Steve Benjamin said McMaster told him the meeting will still go on as planned. 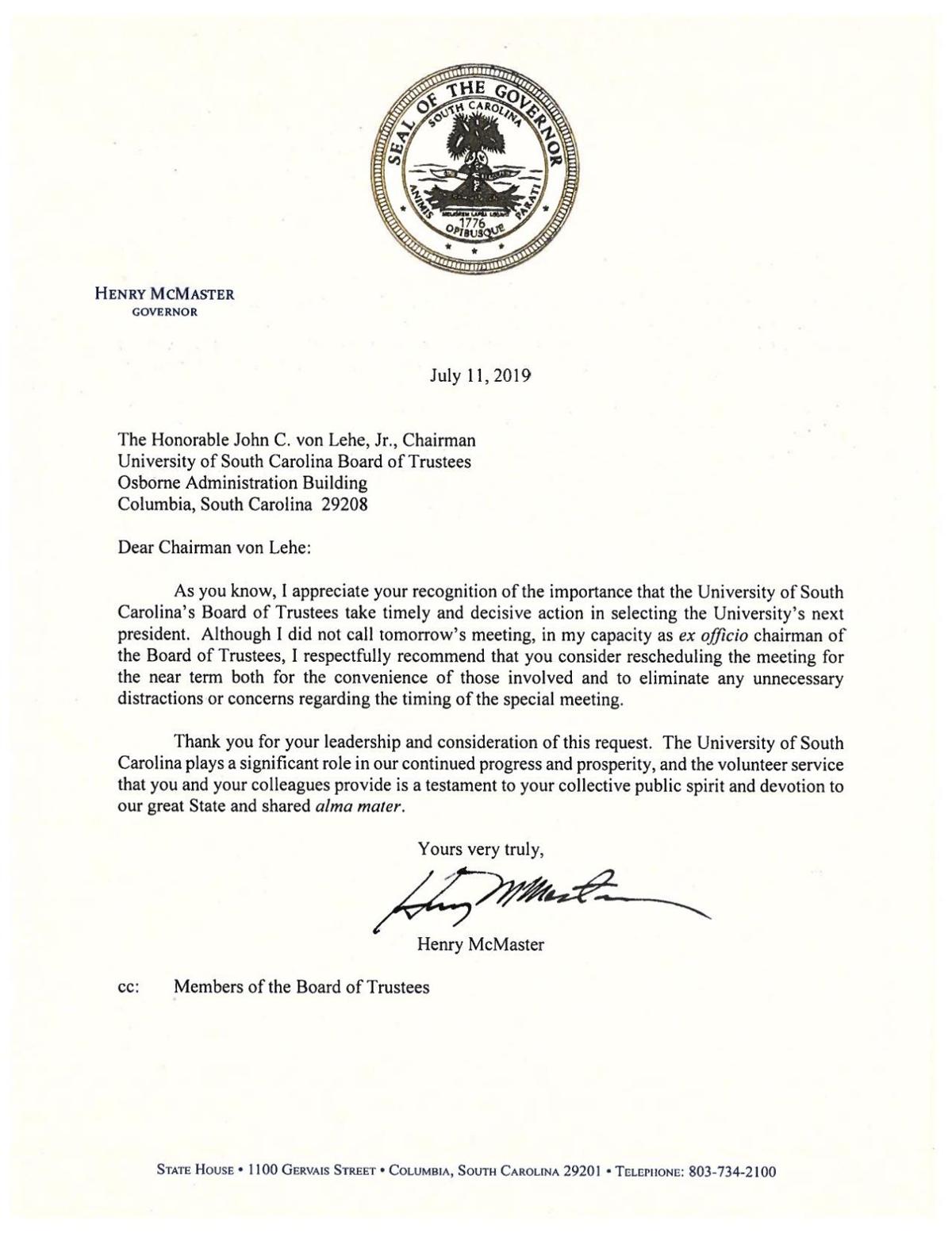 Caslen, 65, is facing stiff opposition on the USC campus.

The USC Faculty Senate gave Caslen a vote of no confidence during an held an emergency meeting Thursday and asked the board to conduct a new search.

"A leader needs followers, and we would not follow," said Bethany Bell, a social work professor who chairs the faculty welfare committee. "So, he will not be successful if he comes here."

Students and faculty were unhappy the vote for a potentially unpopular president was taking place during the summer when the campus is sparsely populated. Protests, like those in April, were planned for Friday's meeting.

Caslen has been criticized for not having a doctorate degree or extensive research background as well as his comments that were taken to blame binge drinking for sexual assault. Some on campus did not like that that combat veteran, who was at the Pentagon during the 9/11 attacks, was a finalist to become President Donald Trump's national security adviser.

But McMaster, upset at how Caslen was treated at the university, has fought for a board vote to turn the general into USC's next president. McMaster has never met Caslen but he called to apologize after the board's vote this spring.

Despite protests, Caslen would be popular choice in a state that includes four major military bases and possesses one of the nation's largest military veteran populations. Republican state lawmakers who dominate the Legislature believe the general, who worked at the University of Central Florida, also will control costs and slow tuition hikes because he does not come from a traditional academic background.

McMaster told trustees that Caslen could help win military contracts for school with eight campuses and more than 50,000 students. Caslen has not returned calls this week.

The latest setback leaves leadership at the state's flagship university in flux.

After reopening the search in April, trustees appointed USC Upstate chancellor Brendan Kelley as interim president with Pastides set to depart at the end of July.

The school also is looking for a new provost, the school's second-ranking position, after Joan Gabel left to become president at the University of Minnesota. 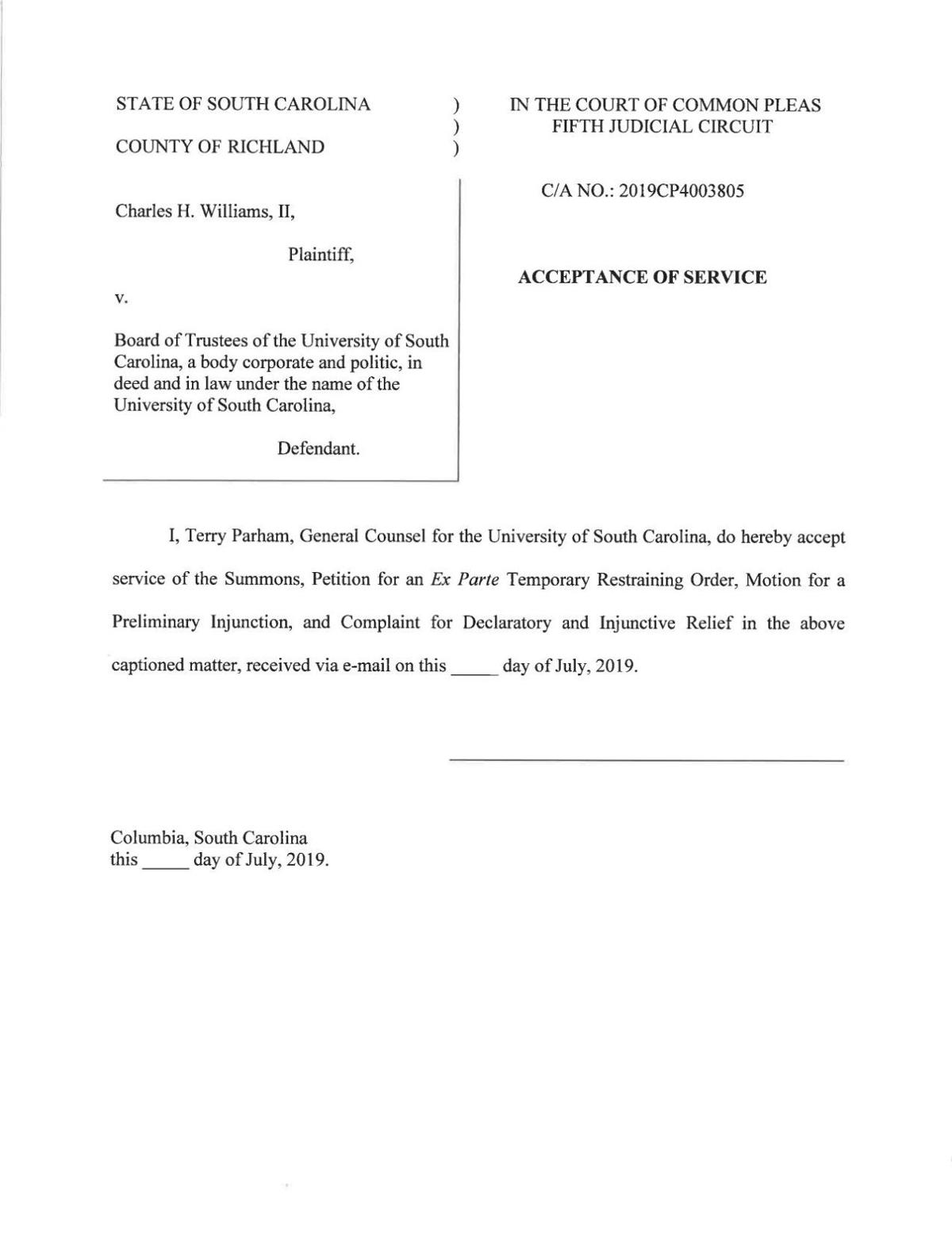 USC campus torn again over president search as board vote looms: 'This makes no sense'

Many University of South Carolina students, faculty and alumni are upset again that the state's largest college wants to hire a former West Point leader who they think is unqualified as its new president.