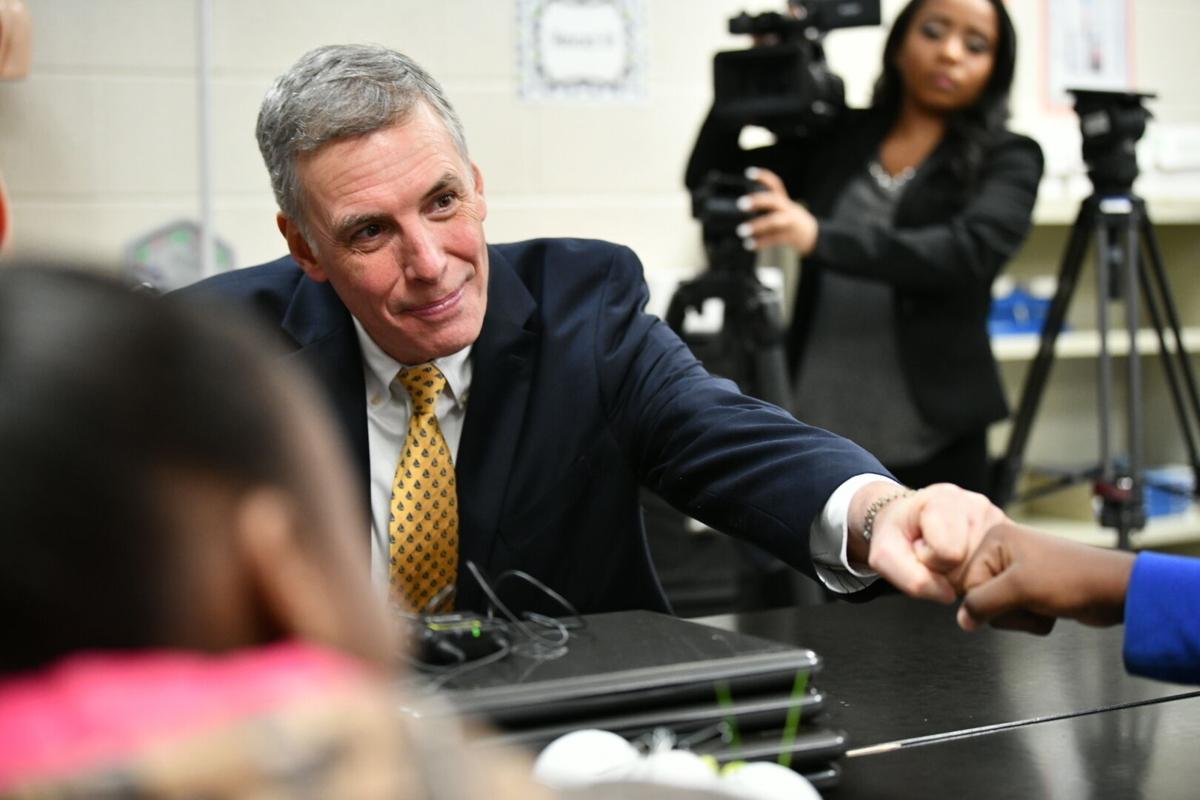 In this Feb. 21, 2019 file photo, U.S. Rep. Tom Rice, R-South Carolina, talks with students in Florence School District Four in Florence. Rice said Thursday, Jan. 14, 2021 he knows he may lose his seat thanks to his support of the impeachment of President Donald Trump. Rice on Wednesday was one of only 10 House Republicans to join Democrats in voting to impeach the president. File/Meg Kinnard/AP 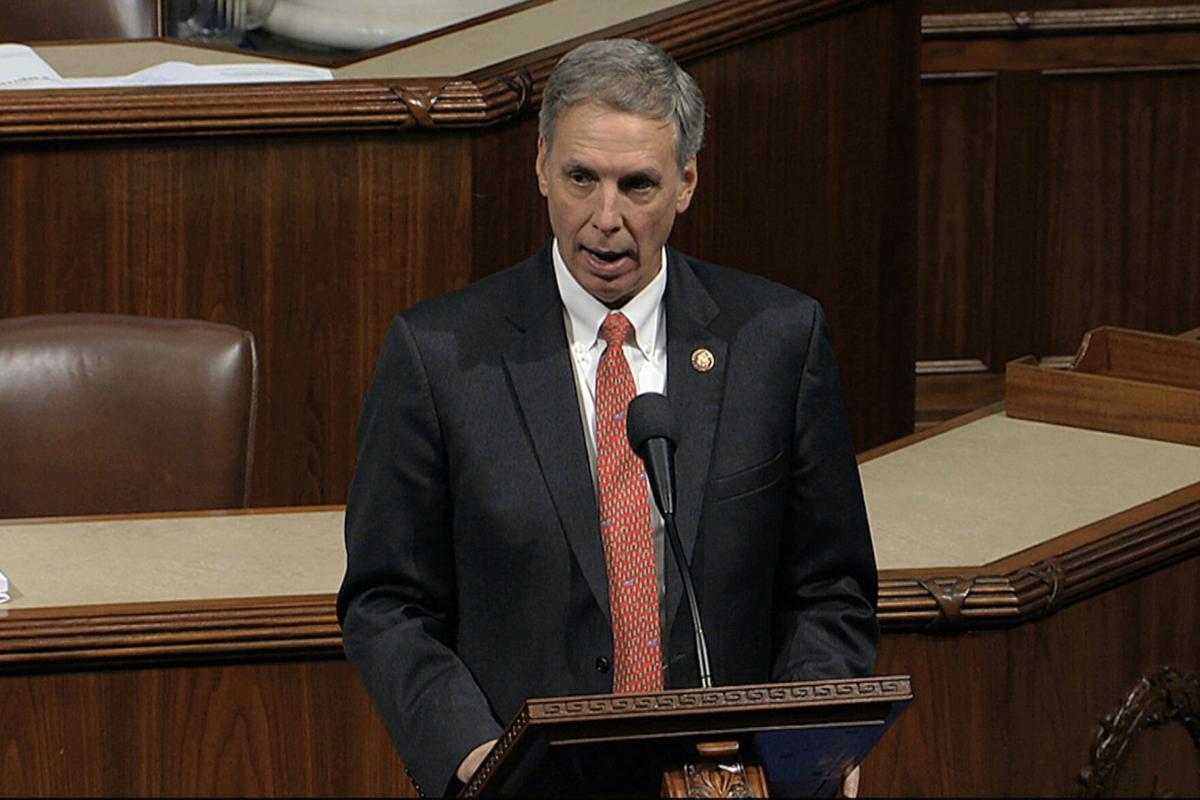 Rep. Tom Rice, R-S.C., speaks Dec. 18, 2019, as the House of Representatives debated the articles of impeachment against President Donald Trump at the Capitol in Washington. Rice was one of only 10 House Republicans on Wednesday, Jan. 13, 2021, to join with Democrats in voting to impeach Trump, a stunning reversal from his position just days earlier. File/House Television via AP

MYRTLE BEACH — Over the course of eight years in Congress, U.S. Rep. Tom Rice developed a reputation as a reliable Republican team player known by friends and colleagues as relatively quiet in a congressional delegation filled with outsized personalities.

He rarely sought the spotlight or broke party ranks, voicing consistent support for President Donald Trump and traditional conservative policies. He put his head down, won a seat on an influential House committee and advocated funding for local projects back home.

"He's the hardest working member of Congress I think I've ever known," U.S. Sen. Lindsey Graham, R-S.C., said, praising Rice as "incredibly bright" and "an effective voice" for his district.

Then, in a dramatic twist Wednesday, Rice became one of just 10 House Republicans to vote in favor of Trump's impeachment, a move so surprising that many of his allies spent the next few minutes wondering whether he had inadvertently pressed the wrong button.

Eventually it became clear: the vote was no mistake.

In a statement explaining his decision, Rice nodded to his track record, noting he had "backed this president through thick and thin for four years."

Even so, Trump's "inexcusable" role in provoking and failing to quell a riot at the U.S. Capitol proved too much for even him to stomach.

"I’ve been loyal to him, but he certainly didn’t feel loyal to us," Rice said, recalling the scenes of Trump supporters storming through lines of police officers and sacking the Capitol in angry pursuit of lawmakers.

Plus, he noted, Trump had multiple opportunities in the aftermath to express contrition and healing but didn't.

Rice's vote immediately upended the political order back home, eliciting swift backlash from many members of his own party who turned their attention to pushing him out of office.

Now, Rice is poised to face a reckoning at the ballot box next year in what is almost certain to become his first seriously competitive GOP primary since he took office.

The contest is likely to provide revealing insight into the endurance of Trump's influence over GOP politics after he leaves the White House, and it will test the question of whether an extensive history of Republican fidelity can be wiped out by a single vote.

The district stretches from Georgetown County up through much of the northeast Pee Dee region to the North Carolina border. Yet the center of its political activity and the majority of its voters are anchored around Horry County, a ruby red outpost where there is no shortage of ambitious Republican prospects.

Not only is the district solidly Republican, it's also home to arguably the most pro-Trump Republican base in a pro-Trump state. In South Carolina's 2016 GOP presidential primary, Trump won Rice's district by a greater margin than any other, beating runner-up Ted Cruz by almost 23 percentage points.

Rice comfortably won the seat in the 2012 general election and has faced no threatening opposition, from either Republicans or Democrats, since.

Many Republican activists in the district now expect that to change.

Already, at least one potentially formidable primary challenger has emerged: Ken Richardson, the chairman of the Horry County School Board and a well-known former Mercedes-Benz car dealer in the area.

Richardson said he was absolutely shocked to see Rice, whom he considers a personal friend, vote to impeach the president. The decision, Richardson argued, ran counter to the will of Rice's Trump-loving constituents whom he said have reached out by the hundreds this week asking him to launch a campaign in 2022.

"I know one thing for sure," Richardson said. "He will be primaried."

Former Myrtle Beach Mayor Mark McBride has not decided on challenging Rice, but is hoping it won't take another two years to hold an election. He's circulating a petition calling on Rice to step down right away.

Horry County GOP Chairwoman Dreama Perdue said most of the calls she's received have been from constituents outraged by the vote and people looking to begin the process of finding new candidates.

Leading into Wednesday’s vote, Perdue believed Rice was doing an admirable job representing the district. But the vote was a "gut punch," she said, and something that will hurt the party moving forward.

"I am severely disappointed and frustrated he would do this," Perdue said. "I’m hearing from people across the entire medium saying, 'I’m not going to help the Horry County GOP anymore,' to 'what can I do to help?, to we need to primary him out.' "

While Rice said he is confident he did the right thing, he acknowledged it may hurt his re-election chances in 2022.

"I’m going to keep trying to do my job well," Rice told The Post and Courier. "It’s been the honor of my life to do it. Hopefully, they'll re-elect me. But if they don't, it's OK. I’m at peace with it."

Incumbency poses powerful advantages in South Carolina politics, but it's far from infallible. Over the past decade, two Republican congressmen in South Carolina lost their seats over accusations that they were insufficiently towing the party line.

In the Tea Party wave of 2010, Trey Gowdy ousted then-incumbent Bob Inglis, a comparatively moderate Republican from the conservative Upstate who had urged his party to take more active measures against climate change.

Then in 2018, little-known state lawmaker Katie Arrington stunned then-U.S. Rep. Mark Sanford of Charleston in an upset few observers saw coming after she argued that he had been excessively critical of Trump — an early indicator of Trump's vice-like grip over the GOP base.

Still, some Republican strategists say Rice holds some valuable assets that may help him avoid a similar fate.

A few years after he was first elected, Rice scored a coveted spot on the powerful Ways and Means committee, offering him — and his constituents — a seat at the table for high-stakes debates over the country's tax code and health care laws.

He worked closely with Trump on one of his crowning achievements, the 2017 tax overhaul, was one of the earliest Republicans to back Trump's protectionist trade policies and has been the leading advocate for a popular local priority: the construction of Interstate 73 to connect the Grand Strand to the rest of the state's highway system.

Through strong fundraising and little need to spend much money en route to easy reelections, he has built up an intimidating campaign war chest of more than $1 million, one of the largest accounts in the entire South Carolina congressional delegation. And he maintains close relationships with an array of influential elected officials in the district and around the state, evidenced by their reluctance to openly criticize Rice in the wake of his impeachment vote.

From his own personal interactions, Rice said he has heard a mostly favorable response. But social media and local conservative blogs erupted with vitriolic opposition, and the state Republican Party also made it known they were not pleased.

"We completely disagree with this sham (second Trump impeachment) and to say I'm severely disappointed in Congressman Tom Rice would be an understatement," party Chairman Drew McKissick said immediately after the vote.

Graham, a longtime Trump ally who vehemently opposes impeachment, said he nevertheless maintains "complete respect" for Rice and has no doubt about his sincerity.

"I know a lot of people are upset with him, but I've done things in the past that people were upset with because I thought they were right," Graham said.

Local Republican state lawmakers long viewed as potential heirs to Rice once he retires, like state Rep. Russell Fry of Surfside Beach or state Sen. Stephen Goldfinch of Murrells Inlet, said they remain focused on their legislative responsibilities for now and refrained from commenting on his vote.

Former Myrtle Beach City Councilman Randal Wallace, who was one of the Republicans who lost to Rice in the 2012 primary, said he admired his one-time opponent for showing conviction, even though he did not personally support impeachment so close to the end of Trump's term.

“This was a conscience vote," Wallace said. "I felt he did what he had to do, and I certainly don’t criticize him for that."