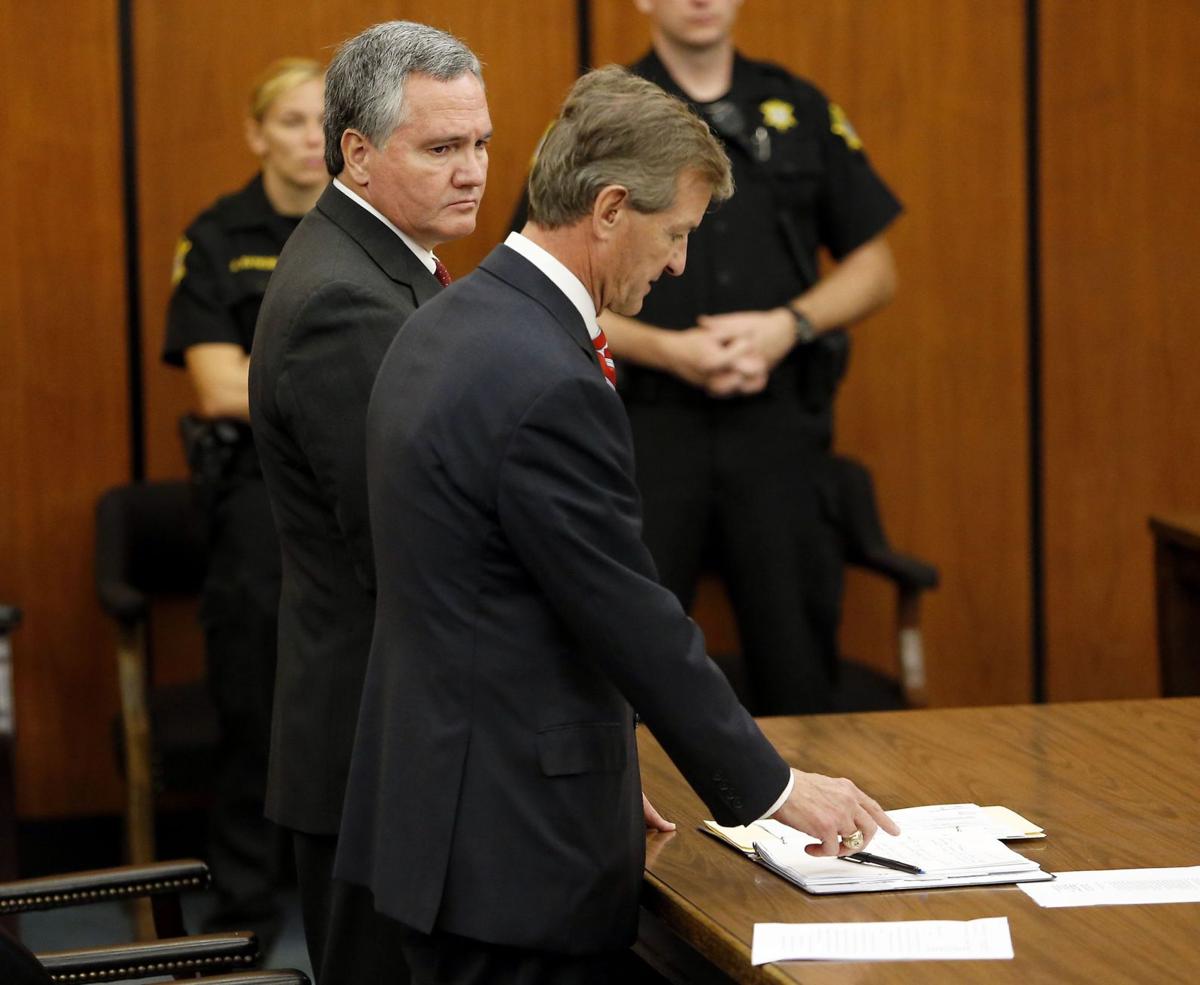 Bobby Harrell listens as his lawyer discusses the guilty plea during a hearing Thursday at the Richland County Judicial Center in Columbia. 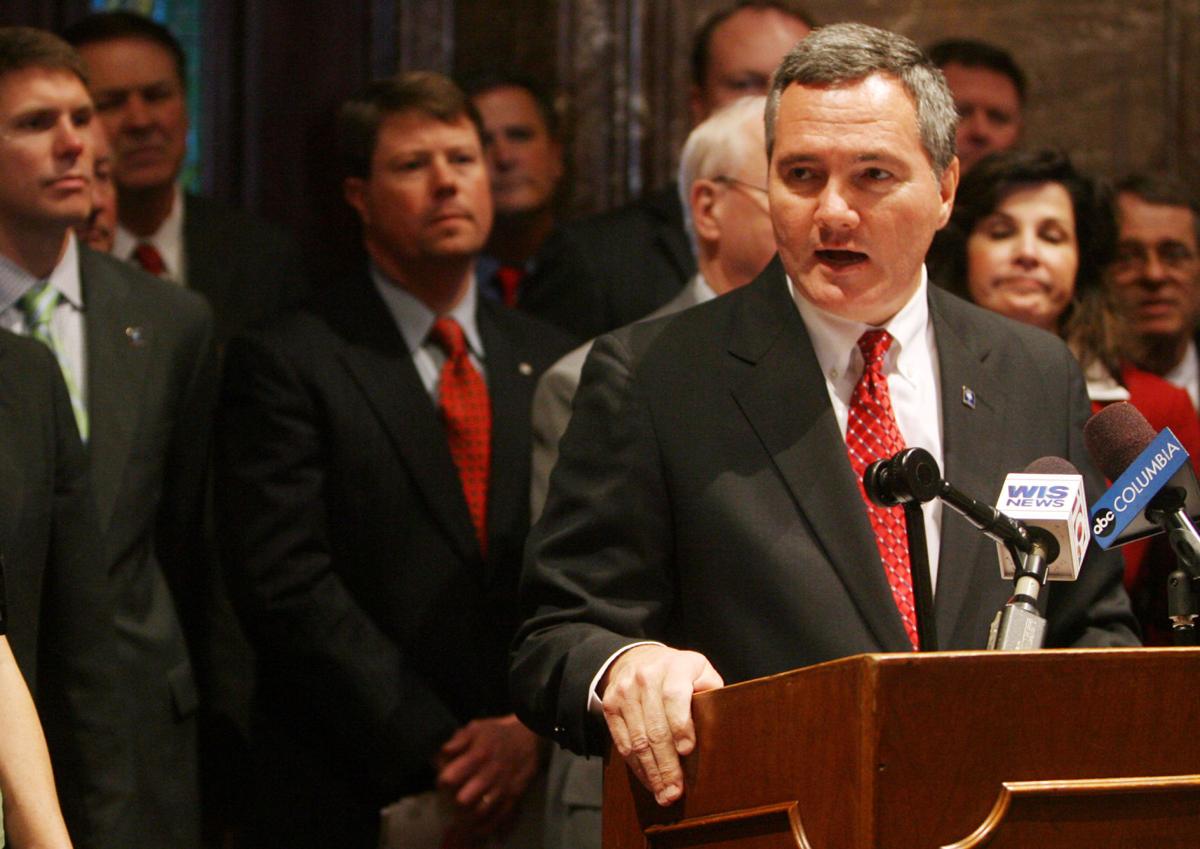 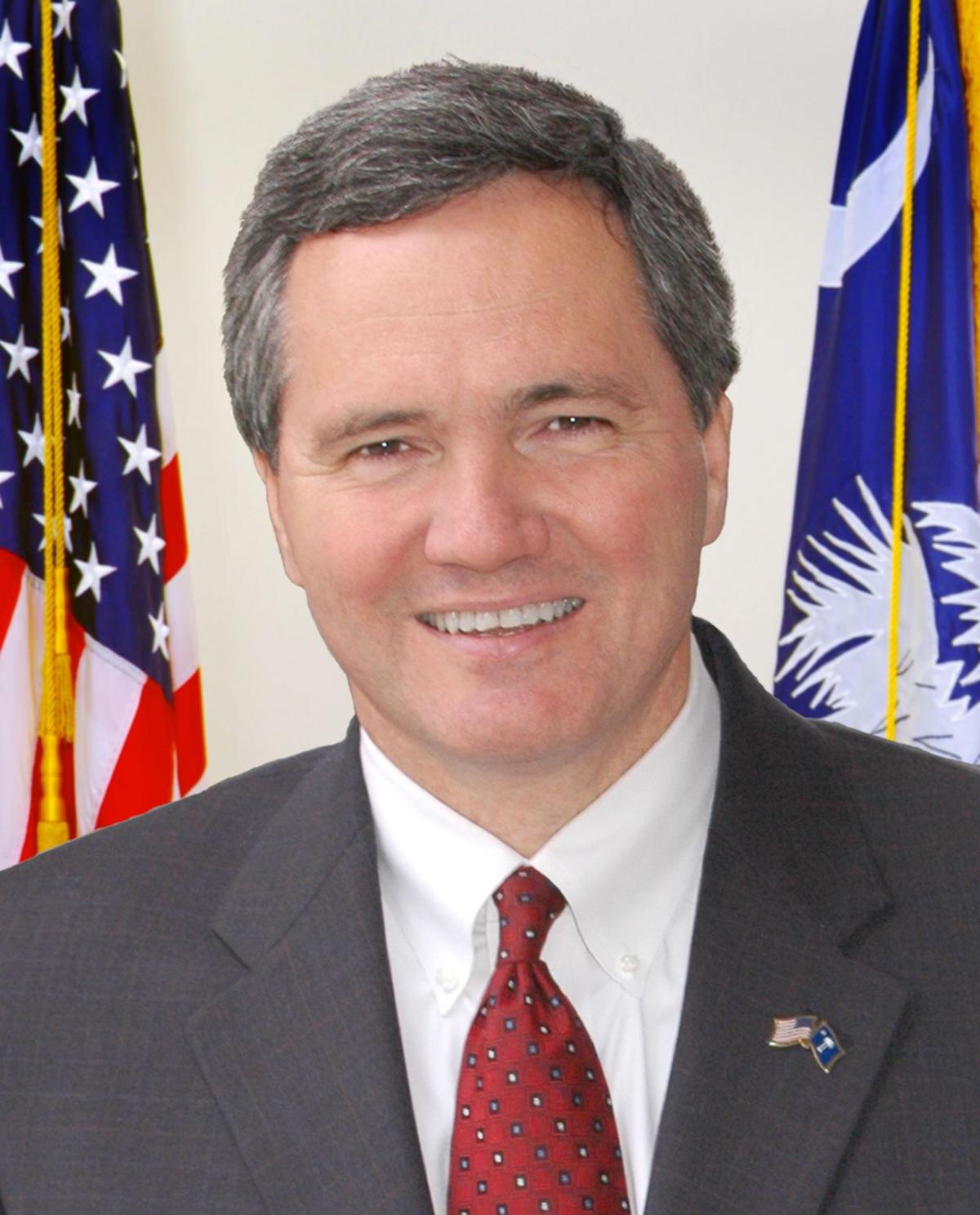 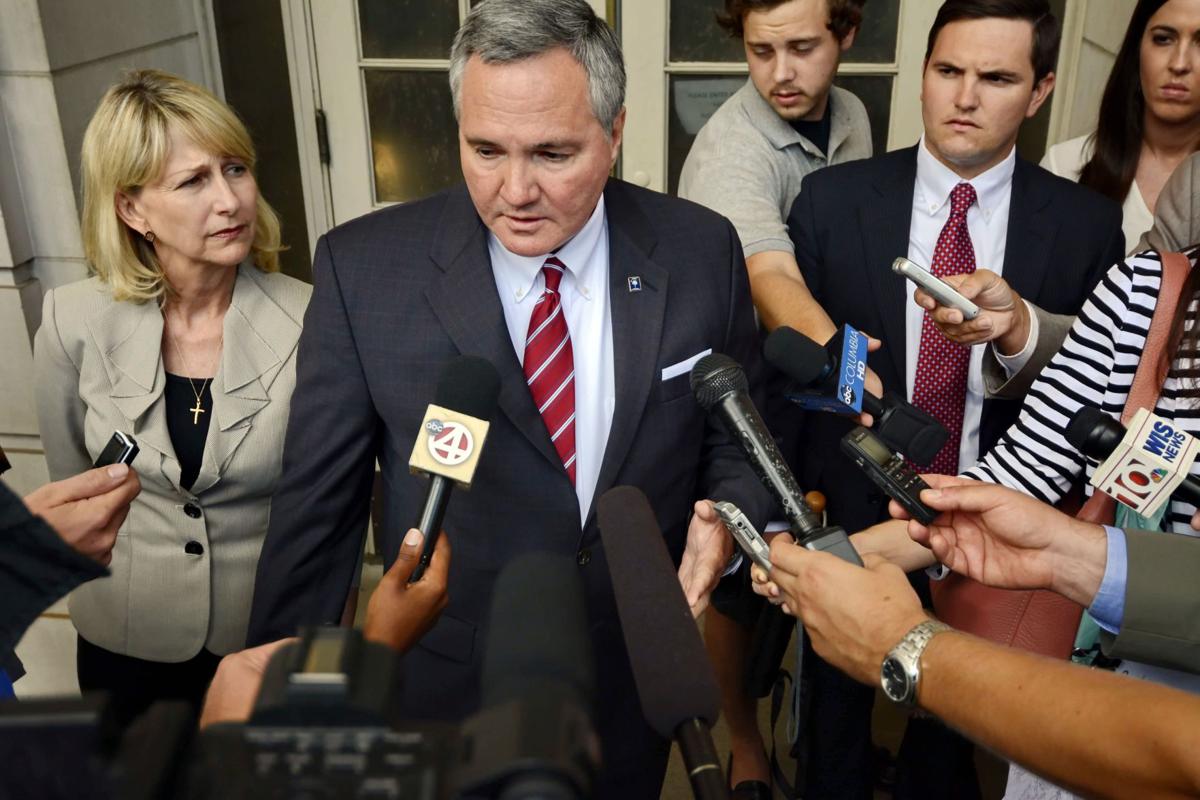 Bobby Harrell listens as his lawyer discusses the guilty plea during a hearing Thursday at the Richland County Judicial Center in Columbia.

COLUMBIA - Former House Speaker Bobby Harrell pleaded guilty Thursday to six counts of misusing his campaign account for personal benefit and resigned, an abrupt and humbling departure for one of the state's most powerful lawmakers.

But the Charleston Republican also could be the first domino to fall in what appears to be a widening state and federal investigation into legislators' conduct. State and federal authorities now have a key asset in their probe, according to the deal Harrell signed with First Circuit Solicitor David Pascoe.

Harrell is required to pay $30,000 in fines for the six charges and pay around $94,000 to the state's general fund from mis-use of campaign dollars, Pascoe said.

Circuit Judge Casey Manning approved the plea deal, which includes three years probation but no jail time. It also required Harrell to resign his office immediately and bars him from holding public office for three years.

As part of Harrell's probation period, state and federal authorities now have the cooperation of Harrell, a man who has been at the center of South Carolina's government for years. Harrell is essentially required to become an open book for investigators, waiving his constitutional rights and agreeing to testify in court if they call on him, according to his plea deal.

"The failure of (Harrell) to be fully truthful and forthright at any stage" would spell the end of the agreement and open up Harrell to at least four more charges and other stiff consequences, according to Pascoe and the agreement.

If he holds up his end of the deal, Harrell would stay out of jail.

The prosecutor's case hinges on Harrell's use of his private airplane, which the licensed pilot often flew from Charleston to Columbia during the legislative session. Pascoe said that the dynamics of the case changed when he saw he could prove Harrell forged flight logs of plane trips that allowed him to reimburse costs of his plane. Harrell's lawyer, Bart Daniel, disagreed with some of those allegations, although he said some of the trips scrutinized were questionable.

Harrell did not plead guilty to indictments that included the forging of flight logs. But Pascoe said he could prove it occurred if the case went to court. "It changed it from a case of simply looking at the flights for being an improper benefit to being actions of deceit or at the very least gross negligence," Pascoe said in an interview.

Harrell declined to comment after the hearing, which was packed with television cameras and reporters.

"I have agreed to this today to end what has been a two-year nightmare," Harrell said in a statement issued after the hearing at the Richland County Courthouse.

"This has been incredibly hard on my family and me, and it is time for it to end. We have a fundamental disagreement over the proper use of a campaign account to fly a private aircraft to conduct state and campaign business, but to continue to fight this would have taken at least another year, possibly two.

"Cathy and I are deeply appreciative to everyone who has offered words of encouragement and prayers on our behalf. My passion for our state remains as strong as it has ever been, and I will continue to look for ways to serve the Lowcountry and South Carolina."

If Harrell abides by the agreement, prosecutors agreed to drop four similar charges against him.

The six charges to which he pleaded guilty include several instances where Harrell claimed plane trips for legislative business but the trips either never occurred or were deemed not to be official business.

The difference between personal and office use for using campaign funds has been a controversial subject for years, and South Carolina legislators have often loosely defined what constitutes official business.

Most of the plane trips under scrutiny occurred in 2009. In March 2009, Harrell took his friends and family to Florida for a high school baseball tournament. He later claimed on disclosure forms that he took the trip for "legislative travel," according to court documents. Authorities determined the trip was a personal one.

In court, Pascoe pointed to a flight in January 2009 when Harrell sought to change the true reason for a flight on a flight log. Investigators pulled his cellphone records from the day, which showed him travelling at 65 miles per hour.

Harrell had taken a quick test flight that day but claimed he commuted to Columbia by plane. "We can prove without any doubt, much less beyond a reasonable doubt, that's not true," Pascoe told reporters after the hearing. "Unless he's flying at about 65 miles per hour from Columbia, which he was not . he was driving to work that day."

Attorney General Alan Wilson - who prosecuted the case for months before handing it off to Pascoe after a high-profile legal tussle with Harrell - said in a statement: "(T)his matter has confirmed that no one in South Carolina is above the law."

Pascoe also said he had to be guarded in comments about the agreement and other investigations, and declined to comment on questions about state and federal involvement.

Harrell attorney Daniel said in an interview that the former speaker does not likely face further prosecution at the federal level.

"As long as he cooperates, this case is over for Bobby," Daniel said.

Before Harrell entered his plea, sources told The Post and Courier that state and federal authorities had launched a broader probe into the Legislature.

The probe is investigating whether lawmakers steered state contracts to their own businesses and nonprofits, or those of their campaign donors or supporters. It also is examining spending of Harrell's political action committee and whether lawmakers sold their votes.

For some, the current investigation stirs up memories of Operation Lost Trust, a federal probe in 1990 that caught more than two dozen lawmakers, lobbyists and others in what was the largest legislative public corruption prosecution in U.S. history.

John Crangle, an attorney and director of the good government advocacy group S.C. Common Cause, said Harrell's cooperation marks a turning point for the ongoing broader investigation. "This whole deal was designed for Bobby Harrell to rat out other people," Crangle said.

As he stood before Judge Manning, a somber-looking Harrell answered a series of routine questions about the agreement in court with either "Yes, sir" or "No, sir." Asked by Manning if he wanted to say anything more, Harrell said in a soft voice, "This has been a particularly hard two years on my family. Doing this today, we hope brings an end to this."

The day's turn of events marked a dramatic fall for the Charleston Republican lawmaker first elected in 1992 and who had served as Speaker of the House from 2005 until last month, when he suspended himself after being indicted.

Speaker Pro Tempore Jay Lucas, who took over upon Harrell's suspension, called Thursday "a disappointing day for South Carolina and the South Carolina House of Representatives."

"Days like this test the faith of the citizens of this State in their public officials," Lucas said. "It is my hope that bringing this matter involving Speaker Harrell to a close will allow the House to move forward and to focus on the issues important to South Carolina."

"Despite Democrats' efforts to exploit this situation for political advantage, what happened today does not detract from our Republican majority's significant legislative accomplishments, and it will not distract us from the goal of maintaining that strong majority," he said.

Scott Huffmon, a Winthrop University political science professor, said he did not see Harrell's plea as being politically damaging for other Republicans running for election on Nov. 4. "People are going to see it more as a failing of Bobby Harrell and not as a failing of a party," he said.

For activists long been critical of Harrell, the day was a long time coming. They said the case's twists and turns challenged the underpinnings of South Carolina's law and government.

Ashley Landess, president of the S.C. Policy Council, said in a statement that a story in The Post and Courier helped turn the tide. The 2012 story raised questions about Harrell's private airplane use and how the trips were - and were not -accounted for on his campaign disclosure forms.

Landess has been one of Harrell's most outspoken critics, and her organization helped drive Attorney General Wilson's decision to investigate Harrell.

"When Renee Dudley published her story in The Post and Courier about Bobby Harrell's campaign spending, he was the most powerful politician in the state," Landess said. "The reaction to Renee's story - from lawmakers and the governor - was disturbing: dead silence. Ultimately the process was good for our state. We know more now than ever how dangerously corrupt our state has become and the scope of power exerted by a handful of legislators. We also know how flawed the process is to hold them accountable, and exactly what has to be done to fix it."

He expects more charges to come for South Carolina legislators.

"It was a struggle," he said of the fight against Harrell. "He thought he was bulletproof - he found out different."

Robert Behre and Schuyler Kropf contributed to this report.