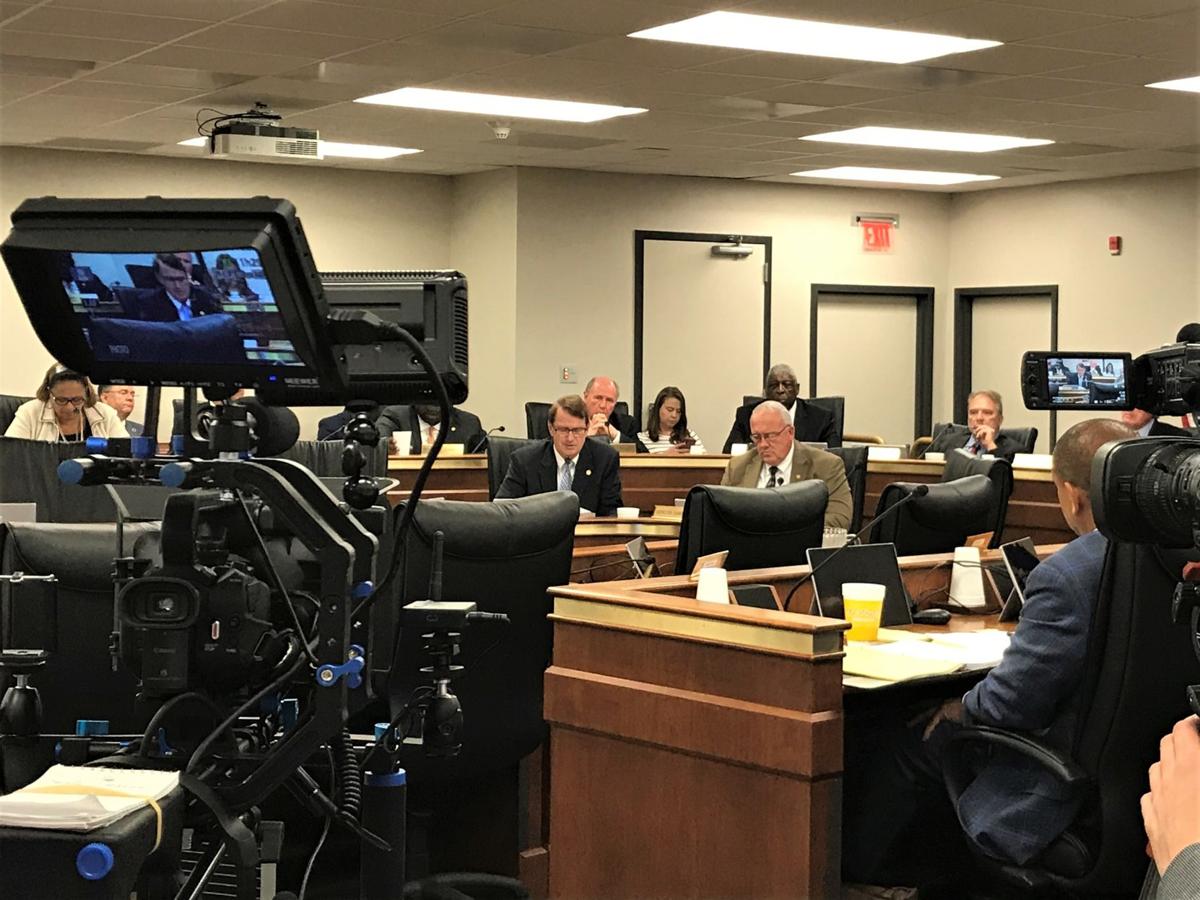 GOP Sen. Richard Cash (center) reads prepared remarks on Tuesday, Nov. 5, 2019, for why he wants no exceptions for rape and incest in a bill banning most abortions. Seanna Adcox/Staff 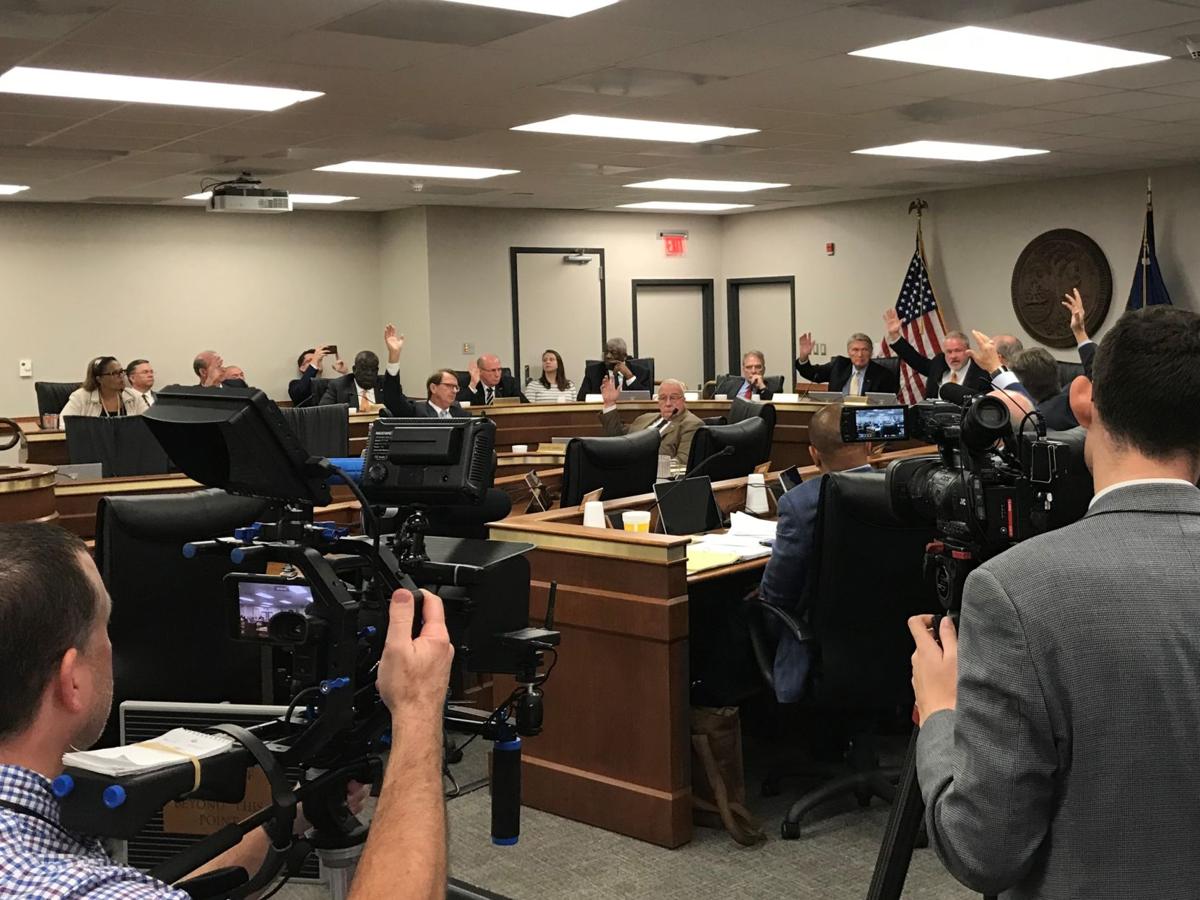 Republican senators on the Medical Affairs Committee raise their hands Tuesday, Nov. 5, 2019, to vote for a bill banning abortions in South Carolina once an ultrasound detects a fetal heartbeat. The amended bill allows exceptions to the ban for woman who are victims of rape or incest, as long as they file a police report. Seanna Adcox/Staff 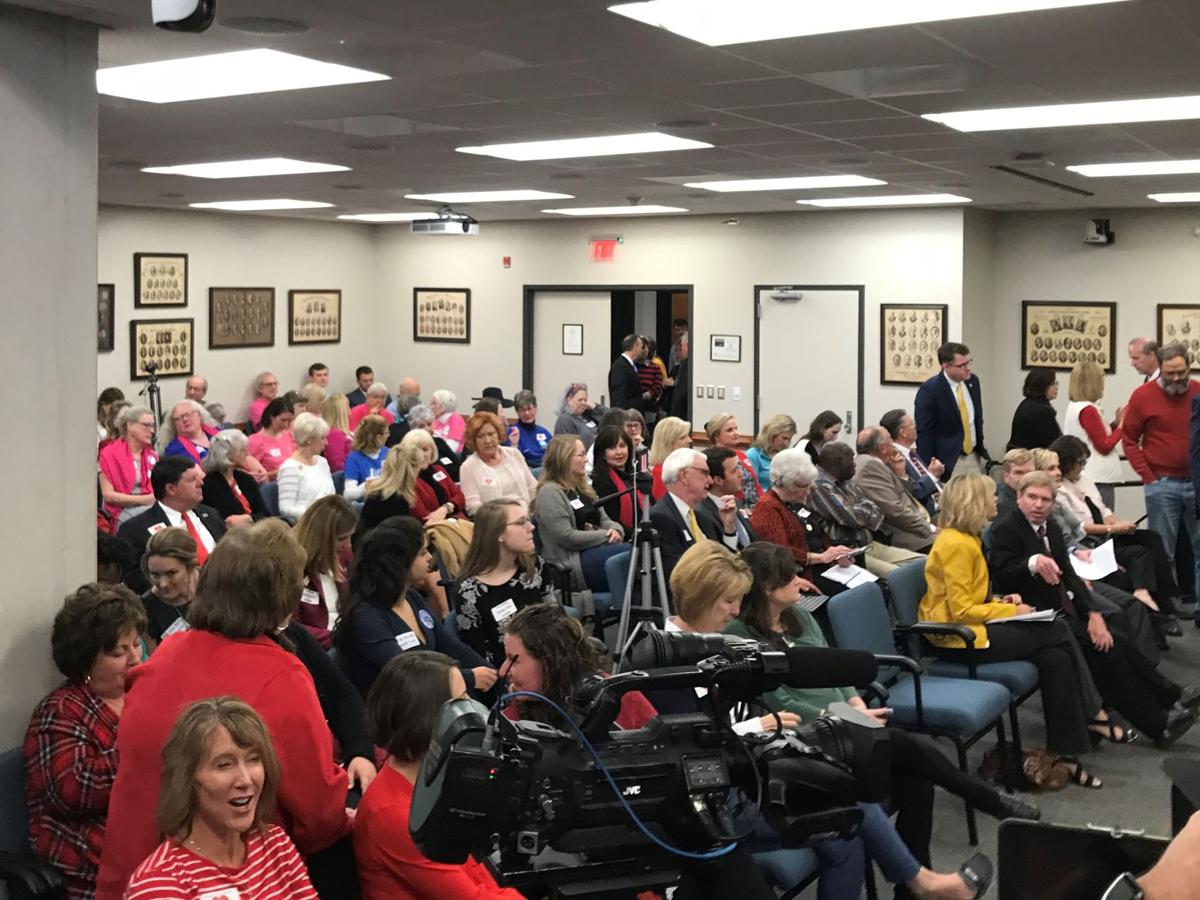 Supporters and opponents of a bill banning most abortions in South Carolina fill a Senate committee room before the meeting starts. Seanna Adcox/Staff

COLUMBIA — A bill banning abortions in South Carolina as early as the sixth week of pregnancy is heading to the Senate floor, with exceptions for women who are victims of rape and incest added back — as long as the crime is reported.

The Senate Medical Affairs Committee advanced the ban, with exceptions, on a party-line 9-6 vote Tuesday, after defeating a version that would have forced crime victims to give birth.

Sen. Tom Davis, an abortion foe, said he hopes the U.S. Supreme Court revisits Roe v. Wade, the landmark 1973 decision that made abortions legal nationwide. But he nonetheless can't support a measure that would perpetuate a woman's trauma and put her mental and spiritual well-being at risk.

The measure makes an abortion illegal if an ultrasound detects a fetal heartbeat. Any abortion provider who fails to determine whether a heartbeat exists or terminates the pregnancy anyway is punishable by a $10,000 fine and up to two years in prison.

Under Davis' amendment, an abortion would be allowed for victims of rape or incest up to 20 weeks of pregnancy, after the provider verifies the crime was reported to law enforcement, making it similar to Georgia's ban passed earlier this year.

Democrats countered simply filing the report can be traumatizing and humiliating for the woman, which is why many never do. Sen. Margie Bright Matthews, the only female senator voting, explained, in detail, what happens after a woman reports a sexual assault, including swab tests at a hospital.

"You can’t just walk into a police department and say, 'I’ve been sexually assaulted, but I don’t want him prosecuted.' That’s not the way it works," said the Walterboro attorney. "Especially in small areas and college campuses, it becomes public whether you like it or not, and that adds to the harassment or psychological effect."

Davis, R-Beaufort, said he's sympathetic, but he wanted to address critics' arguments that women might lie about a sexual assault to get an abortion.

Sen. Marlon Kimpson said he applauded Davis' attempt at a compromise but disagreed with the entire concept.

"You can't put lipstick on a pig," said the Charleston Democrat. "There’s a fundamental, well-documented right for women to make a choice about such personal decisions."

Sen. Richard Cash, the Senate's most ardent abortion foe, had insisted on taking out exceptions for women who are victims of rape or incest. It was his amendment that removed those in subcommittee. But the full committee rejected his arguments, and his version was defeated on a 9-6 vote.

While he acknowledged that women who become pregnant as a result of "horrible crimes that cause great pain and suffering" may not want to give birth to the child, "two wrongs don't make a right," he said.

"Killing an unborn baby will kill the life of an innocent human being," said Cash, R-Powdersville, an anti-abortion activist.

The father of eight argued that a crime victim who goes on to have an abortion could also experience mental repercussions of guilt and shame "about the baby that was killed.

"I’m not one to say which is the greater trauma," he said. "It’s not as if abortion is going to erase the trauma of the rape, but the abortion might be its own trauma."

Sen. Kevin Johnson, D-Manning, noted 14 men and one woman were making a decision for women statewide.

"With one exception, none of us can become pregnant even through rape or incest," he said to applause in the room. "That’s being very hard on a woman. You’re pregnant for something as ugly as rape or incest, but you have to have that child?"

Some women may be able to cope with a daily reminder of a heinous crime, he said, but a bill without exceptions "says we don't care if you can cope with it or not."

Gov. Henry McMaster is emphatic that he would sign the bill, with or without exemptions.

"The bottom line is that, like most South Carolinians, Gov. McMaster is unapologetically pro-life and will sign any bill into law that helps protect the lives of unborn children," said his spokesman, Brian Symmes.

Vicki Ringer, regional director for Planned Parenthood, argues the opposite, saying supporters of such measures are "outside the mainstream of how most people think and feel about safe, legal abortion."

"Their motivation is clear. They want to ban all safe and legal abortions in South Carolina and try to bring a case to the Supreme Court to directly challenge Roe v. Wade," Ringer said.

Nine other states, most of them in the South, have passed similar “fetal heartbeat” measures, according to the Kaiser Family Foundation.

Three of them allow exceptions for crime victims. Like Georgia's, Utah’s law allows exceptions if the abortion provider verifies law enforcement has a record of the crime. Arkansas' law doesn't require verification.

Courts have blocked all of those laws from taking effect.

Democrats defeat bill banning nearly all abortions, but the issue will be back