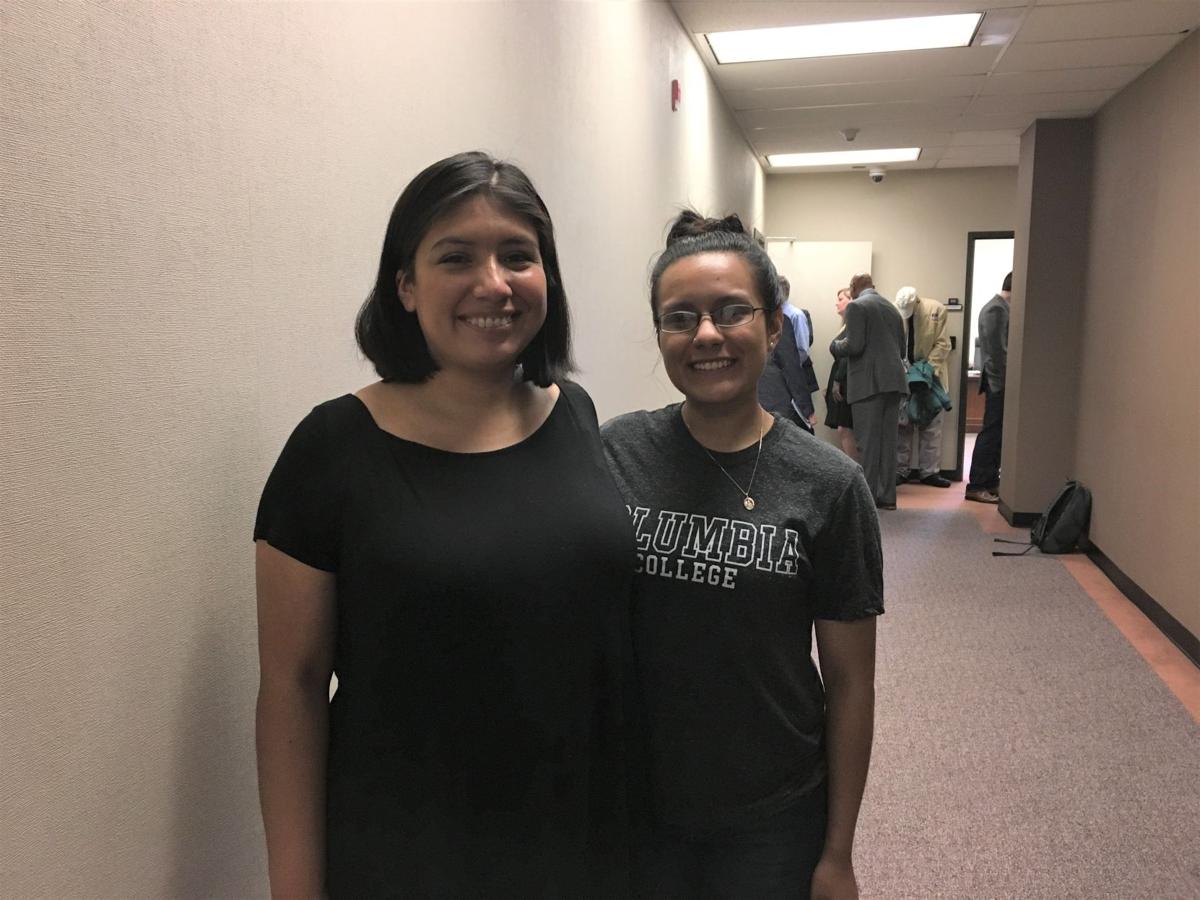 Sarai Bautista, an Easley High graduate, and Aylin Gomez, a T.L. Hanna High graduate, said a bill allowing students like them to pay in-state college tuition and qualify for scholarships would enable them to finish their schooling. The bill advanced Tuesday, April 20, to the full House Judiciary Committee. Seanna Adcox/Staff 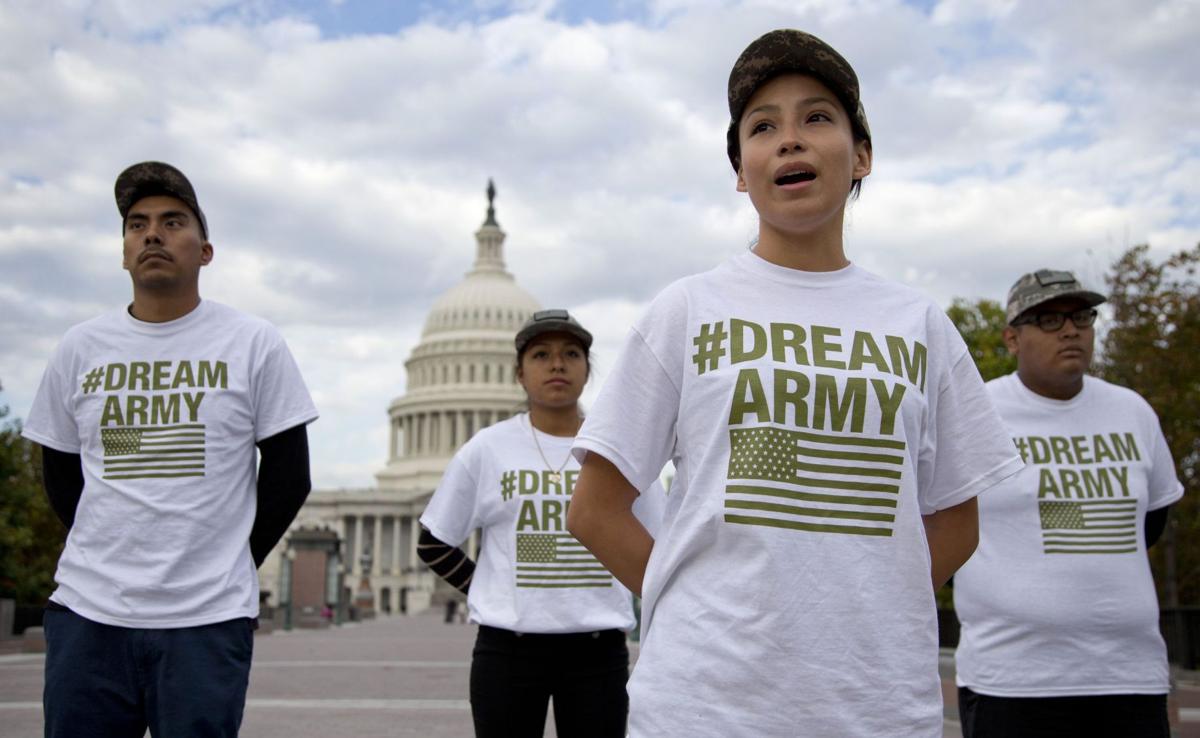 Alina Cortes, born in Mexico and lives in Texas, second from right, speaks to reporters as she stands with other DREAMers (Development, Relief, and Education for Alien Minors), calling for reform of the immigration system, Wednesday, Oct. 23, 2013, on Capitol Hill in Washington.  AP Photo/Carolyn Kaster

Sarai Bautista, an Easley High graduate, and Aylin Gomez, a T.L. Hanna High graduate, said a bill allowing students like them to pay in-state college tuition and qualify for scholarships would enable them to finish their schooling. The bill advanced Tuesday, April 20, to the full House Judiciary Committee. Seanna Adcox/Staff

Alina Cortes, born in Mexico and lives in Texas, second from right, speaks to reporters as she stands with other DREAMers (Development, Relief, and Education for Alien Minors), calling for reform of the immigration system, Wednesday, Oct. 23, 2013, on Capitol Hill in Washington.  AP Photo/Carolyn Kaster

COLUMBIA — Legislation designed to help undocumented immigrants who graduated from a South Carolina high school attend college and fill workforce vacancies advanced Tuesday in the House, 11 years after Republicans in this deep-red state intentionally made both difficult.

The bill's GOP sponsor, Rep. Neal Collins, said it makes no sense for the state to block young people educated in South Carolina's schools from going to college and getting a job, especially since the state's already invested tens of thousands in their education and businesses are clamoring for qualified workers.

The measure would allow "Dreamers" who have lived in South Carolina for at least a year to attend college paying in-state tuition rates and qualify for lottery-backed scholarships that can further lower the costs. They could also earn occupational licenses, allowing them to be a nurse, teacher or work in dozens of other fields that require a state license.

"We obviously have some shortages, ironically, in the very areas most of our people want to work," said Collins, R-Easley.

According to the state's employment agency, there are nearly 69,000 jobs unfilled statewide.

Tuesday's overwhelming vote to advance the bill to the full House Judiciary Committee comes a decade after Republicans bragged about pushing through a law considered at the time among the nation's toughest for those living in the U.S. illegally. It barred non-citizens from receiving any public aid, including state scholarships, and required they pay out-of-state tuition rates — which, at two to four times more expensive, put college out of reach for the vast majority.

Because it also required employers to check potential workers' legal status, the state's licensing agency won't give them an occupational license or permit. At a public hearing 11 years after that law passed with much fanfare, not a single person spoke against the bill reversing parts of it for thousands of children and young adults who consider themselves South Carolinians.

The bipartisan bill, co-sponsored by 50 House members, applies specifically to the estimated 6,400 South Carolina residents covered by President Barack Obama's 2012 Deferred Action for Childhood Arrivals program, which allows young immigrants brought to the U.S. illegally as children to stay in the country if they meet certain age and education criteria, such as having a diploma and not being a safety concern. They are commonly referred to as "Dreamers," based on never-passed proposals in Congress called the DREAM Act.

Despite the hotly divided national debate over people coming to the U.S. illegally, "this is a winning political argument" even in the most conservative parts of this Republican-dominated state, Collins said of his proposal, which has gained support since he first filed it in 2017.

"People are looking for solutions," and voters give credit to those trying to make them happen, he told his colleagues.

The measure is backed by business chambers around the state, who call Dreamers "model residents."

While waiting for Congress to act, "South Carolina's economy is potentially missing out on thousands of ready and willing workers," reads a letter to the House panel signed Tuesday by leaders of the Upstate, Greenville and Charleston chambers of commerce. "Allow those protected by DACA to be as productive as possible while living in our state."

Aylin Gomez, who arrived in Anderson from Mexico 13 years ago, said the bill would allow her to attend the University of South Carolina as she'd planned. The 19-year-old is attending Columbia College, working 20 hours a week at the college bookstore to help pay for the private tuition costs.

She said she "had no idea" she couldn't get a state scholarship until she was actually enrolling in college, a month after graduating from T.L. Hanna High with honors. She spent her freshman year at Tri-County Technical College, intending to be a nurse. But a semester in, she learned she'd have to move to a neighboring state to actually get a job as a nurse. Now she wants to be a lawyer.

Sarai Bautista, a 2009 Easley High honors graduate, said it's taken her five years to earn an associate's arts degree at Tri-County Tech, as she's had to work while attending and wasn't informed until a year into her courses that it would be impossible for her to be a radiology technician in South Carolina. The 28-year-old now hopes to become a social worker, if she can finish her schooling.

She said she can't afford college unless this bill becomes law.

"This bill to me would mean that in all of the years that I've believed the United States to be the best country in the world, I haven't been wrong," Bautista said.

The bill has no chance to pass this legislative session, set to end May 9. But debate can resume when legislators return in January.

According to a study by the New American Economy, which has worked with the chambers, an estimated 320 South Carolina 'Dreamers' would graduate from college within six years, earning an additional $3.5 million annually in taxable income, if the bill became law.

The state stands to lose out on the nearly $11 million in state and local taxes, and combined $165 million in spending power they already have if they leave South Carolina to work in a state that "permits them to work in the profession they choose," the chambers argued, citing other numbers in the March report.