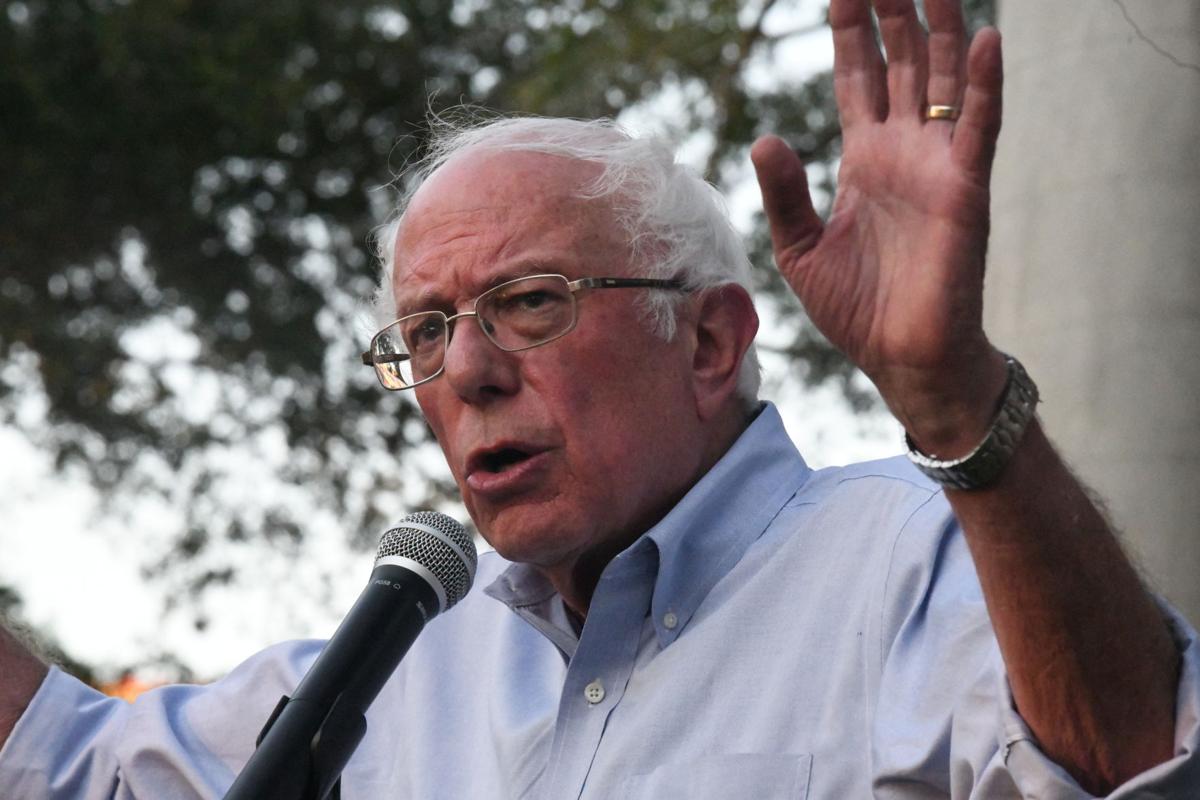 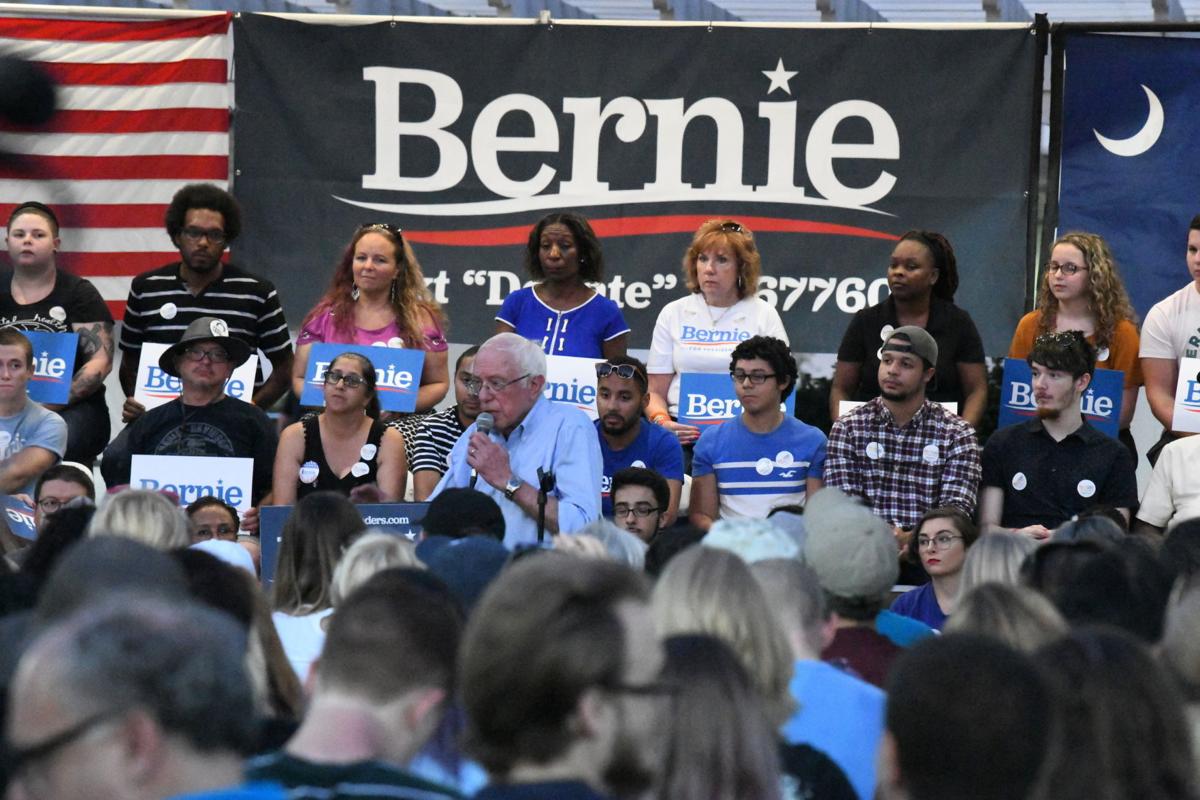 MYRTLE BEACH — Bernie Sanders' wrinkled shirtsleeves are rolled up like a man getting down to business. His right arm makes wide sweeps, his finger comes down to stress every item of his to-do list.

In the audience of 900 there are young and old — more white than black — but he's preaching what they want to hear: That there's a path toward shifting the country to the left on health care, education, criminal justice and the environment — signature issues pushed by the independent senator from Vermont during his lengthy career in Washington and echoed by most of the rest of the Democratic field.

"It is a campaign that is going to defeat the most dangerous president in the modern history of this country," Sanders says. "The message of this campaign is 'us,' not 'me.' "

It's what Sanders supporter Julie Winzenried wants to hear, again.

"His passion," she said. "He's honest. He's been saying the same thing for years. He's true. You don't see that in politicians anymore."

Still, Bernie Sanders' 2020 race in South Carolina seems a lot like where he was during the 2016 campaign.

He's a wildly popular rock star with his base but, just like four years ago, he's chasing the party establishment figure.

This time, it's Joe Biden instead of Hillary Clinton.

He's also much older, turning 78 on Sept. 8. That comes as his youngest Democratic rival in a youth-oriented party is 37-year-old South Bend, Ind., Mayor Pete Buttigieg.

And there's much more competition.

Some 20 hopefuls remain in the Democratic field, including women, minorities and two African American senators, a demographic that will make up the bulk of South Carolina's Democratic presidential primary turnout on Feb. 29.

Even more troubling to some is that Sanders isn't seen as a bona fide Democrat in some circles. He still holds onto that "Independent" label in D.C.

So where does that leave Sanders in South Carolina?

The answer: with lots of staying power.

Just like in 2016, money and long-term support won't be a problem. Donation figures from the summer gave him the biggest number of donors in the pack, with more than 746,000. Massachusetts Sen. Elizabeth Warren is next at 421,000.

Ten thousand of those Bernie donors are from South Carolina.

Even if he falls behind in the delegate count, Sanders' path is strong enough that he's expected to compete in just about every caucus or primary state heading toward next summer's convention in Milwaukee.

South Carolina Democratic Party Chairman Trav Robertson took note of Sanders' 2020 commitment during an interview with The Post and Courier in January. Back then, before the race began in earnest, he expected Sanders' campaign to be more polished this time around.

"When he first ran for president, his campaign took off to the extent that they may have been prepared for a one- or two-state primary strategy," Robertson said. "He was not prepared for 50-state strategy and the rate at which his campaign grew, as opposed to Hillary Clinton who knew what a multi-state, cross-country campaign would be."

The noticeable change, Robertson said, is that since 2016, Sanders and his supporters have continued to organize in campaign mode.

"It may be disorganized in some parts of state or country, but they are there," Robertson said. "This grassroots organization has been in existence for almost four years ... That's a heck of a difference."

Sanders' South Carolina communications director Michael Wukela says 2020 is completely different in other ways. Clinton had her organization on the ground here for eight years ahead of the 2016 showdown. When Sanders showed up here, "there was no oxygen. There was no room to move."

Who is feeling the Bern? In North Charleston, it was a mostly-white crowd

This time, it seems the rest of the pack is chasing the ground that Sanders broke, Wukela said.

So far this campaign, Sanders has held 30 events in South Carolina, putting him in the top tier of appearances, behind leader New Jersey Sen. Cory Booker's 39.

Stay up-to-date on which 2020 presidential candidates are visiting the Palmetto state with The Post and Courier's tracker. Continually updated as candidates campaign in South Carolina in the months leading up to the state’s February 2020 primary.

Polling-wise, Sanders is also a force in the state. Biden led Warren 36 percent to 17 percent in South Carolina, according to the latest Post and Courier-Change Research Poll from mid-August; Sanders was at 16 percent.

Appealing to the black vote

What is noticeably different from 2016 is that Sanders is also more assertive in trying to connect with South Carolina's black communities, which are expected to make up more than 60 percent of the primary turnout.

For instance, he used an August stop at the Greenview neighborhood in Columbia to release what he called his "comprehensive plan to reform the entire American criminal justice system."

Then there was his visit to Denmark, a tiny South Carolina community of 3,000 where a fight is continuing over the quality of the water.

"It strikes me that the water crisis in this country, which goes well beyond South Carolina, is an issue we just don't talk about," Sanders said.

Back in January, he spoke of race relations and President Donald Trump at North Charleston's Royal Missionary Baptist Church in the Liberty Hill neighborhood.

More than half of the Sanders' campaign staff in South Carolina is African American, Wukela said.

Other Sanders backers point to the fact he is out front and ahead of the pack on calling for the elimination of all student loan debt.

"I think he is a supporter of the working class," said Rich Foor another Sanders supporter from 2016 who after graduating from college in 2015 is $43,000 deep in student debt. "And he wants to forgive all of it."

Sanders' Myrtle Beach stop was to promote his own ideas to combat climate change, using the open-air park two blocks from the ocean as a backdrop.

He wants climate change declared a national emergency, alongside a $16.3 trillion investment in federal dollars through the 2030s to promote alternatives to fossil fuels, renewable energy and improvements to infrastructure.

“In this fight to combat climate change, failure is not an option,” he told the crowd at Chapin Park. “Now is the time to save the one planet that we have.”

In the audience was Judy Dozier, a 68-year-old nurse assistant from Georgetown who said she was attending her first presidential political rally ever.

She likes Sanders' view on Medicare for all, his opposition to offshore drilling and the $15 an hour minimum wage he's championed.

Most of all, she likes his message of reaching out to those less fortunate.