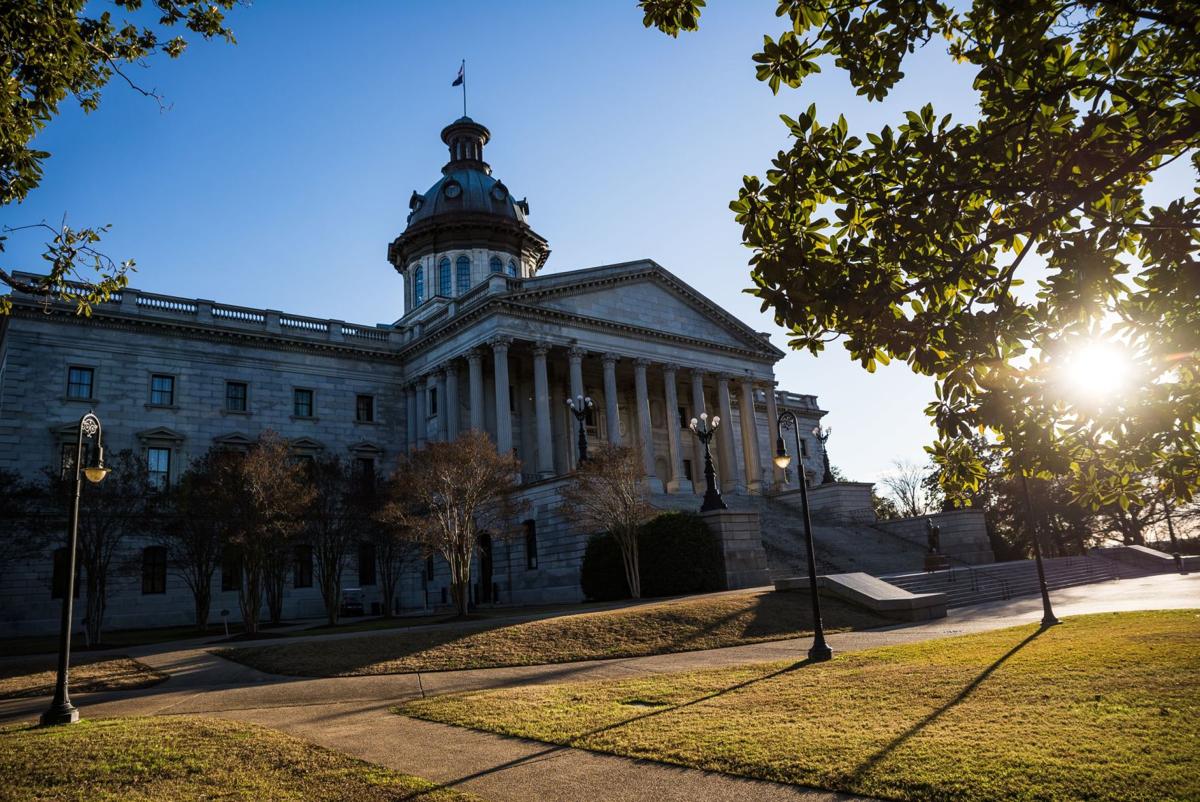 South Carolina has nearly $2 billion more to spend than a year ago, and lawmakers will tackle issues ranging from how to fix struggling schools to whether to sell state-owned utility Santee Cooper when the General Assembly kicks off the second year of a two-year session Tuesday. File/John A. Carlos II/Special to The Post and Courier 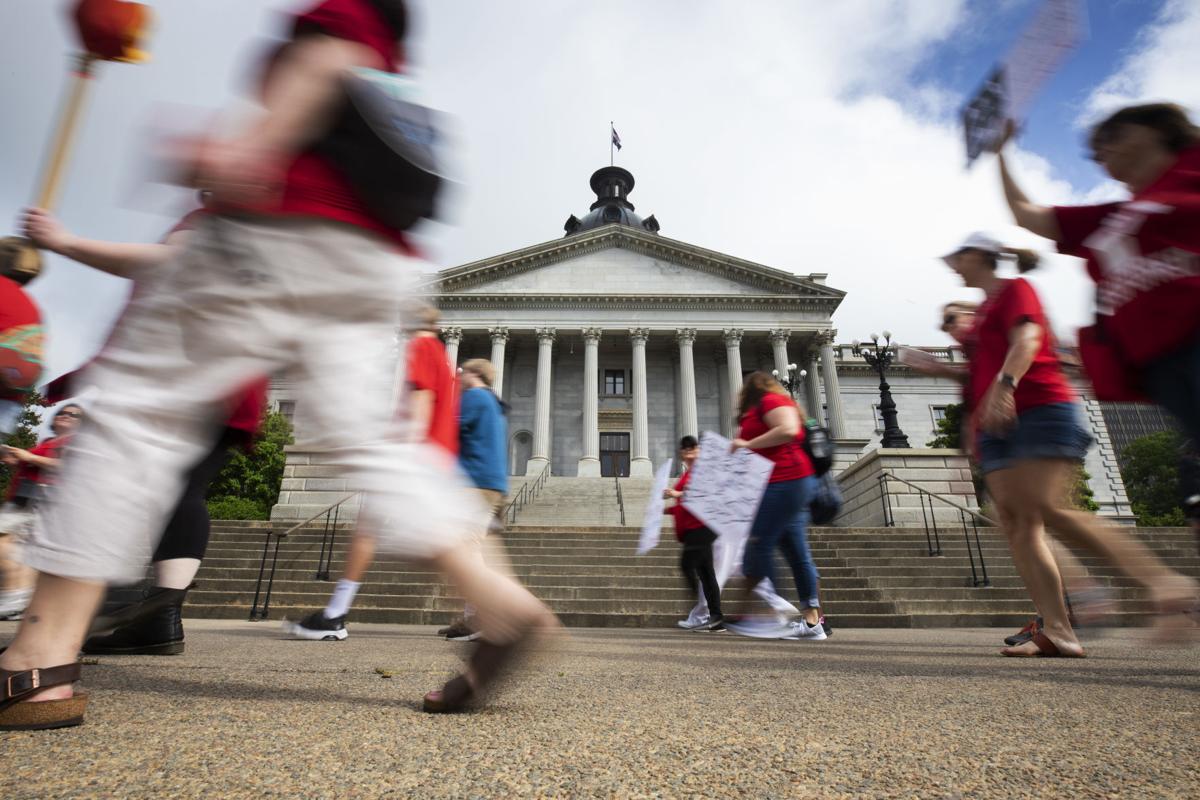 Teachers and supporters march past the South Carolina Statehouse during protest in Columbia on Wednesday, May 1, 2019. S.C. lawmakers will again attempt to fulfill promises made last year to transform the education system.  File/Lauren Petracca/Staff

South Carolina has nearly $2 billion more to spend than a year ago, setting up battles in the Statehouse on who should get the tax windfall.

When lawmakers start the second year of a two-year session on Tuesday, they also will tackle how to fix the state's struggling K-12 school system and whether to sell the state-owned power utility Santee Cooper.

Proposals to ban almost all abortions and overhaul the board of the state's largest college also highlight what's expected to be a lively session.

South Carolina’s legislators this year face a prospect never seen before – deciding what to do with an additional $1.8 billion in additional money, which will push the spending plan for state taxes past $10 billion for the first time.

The state’s revenue forecasters say continued economic growth, coupled with money that came in above expectations over the last two years, translate to $1 billion for one-time expenses, such as long-deferred maintenance on state buildings, and more than $800 million for recurring costs, such as salary increases.

SC agencies want $2.8B more next year — or $1B more than what's available

Senate Majority Leader Shane Massey said Thursday this should be the year legislators finally tackle an overhaul of the state’s tax code.

“I don’t want to do some gimmicky $50 rebate just so you can make a campaign commercial about it,” said the Edgefield Republican, referring to how $67 million was spent in this year’s budget. “I want to make some significant changes."

But he’s not at all optimistic that will happen.

“Oh, we’re going to spend all of the money. We just will,” Massey said.

Rep. Gilda Cobb-Hunter, an Orangeburg Democrat, said it’s way past time to boost the pay of state employees who “keep the wheels rolling.”

House Majority Leader Todd Rutherford, D-Columbia, said legislators don’t need to talk about tax breaks while there are so many needs across the state, including widening interstates, building schools and improving safety at state prisons.

S.C. lawmakers will again attempt to fulfill promises made last year to transform an education system that’s fallen to the bottom rungs nationally and is hemorrhaging teachers.

Two things seem to be near-guarantees for 2020 — a second year of substantial hikes in teacher salaries and expanding state-paid, full-day 4-year-old kindergarten statewide.

Both are focal points of McMaster’s budget recommendations and are backed by legislative leaders in both chambers. While they agree a pay boost is needed to stem a teacher shortage crisis, there’s disagreement on the amount and how it will be distributed.

McMaster and House leaders want to give every teacher a $3,000 pay boost, costing $211 million, toward what House Speaker Jay Lucas calls the second year of a five-step plan to get teachers’ pay to the national average. Senate Education Chairman Greg Hembree proposes a bigger boost, at $225 million total, but he wants to let districts decide, within certain parameters, how to divvy it up to best meet their classroom needs.

Senators pledge to immediately take up a pared-down version of a bill the House passed last year — which makes changes to teacher preparation, student testing and accountability. Two key additions inserted by a Senate panel, which mostly struck whole sections, would provide earlier summer programs for children struggling to read and tack on five paid work days to teachers’ school year, as an answer to complaints they lack unencumbered time to plan.

A long-awaited report from the S.C. Department of Administration about the potential ramifications of selling state-owned utility Santee Cooper is expected to hit lawmakers' desks possibly within a matter of weeks.

As Massey put it: "When that report gets issued, it's going to suck all the oxygen out of the room for a period of time."

The report will lay out the bids from private utilities to either purchase or manage Moncks Corner-based Santee Cooper and consider the economic impact on the state of each offer, as well as examine options for reforming the utility if the state decides not to sell it.

Some lawmakers, particularly conservatives, have been champing at the bit to privatize the agency for years — an effort that got new life after Santee Cooper played a key role as the minority partner in the failed, multibillion dollar V.C. Summer nuclear project.

McMaster has been a top proponent for selling the utility, while some lawmakers in Santee Cooper territory have been far more wary of the prospect.

No matter what issues take top billing each legislative session, abortion finds its way into the discussion and becomes a topic of significant debate at the Statehouse.

Last year, the state House passed a bill that would ban abortion in South Carolina after a fetal heartbeat has been detected. The measure could effectively ban abortions since a heartbeat can be detected as early as six weeks into a pregnancy.

Last fall, a version of what’s commonly called the “fetal heartbeat” bill passed out of the state Senate’s Medical Affairs Committee, pushing the bill to the Senate floor for a possible showdown this session.

The possibility of the bill getting through the Senate and eventually to McMaster’s desk — the Republican governor has indicated he’d sign the measure — seemingly hit a barrier when Massey told reporters last week he doubted the fetal heartbeat bill could garner enough support in the Senate.

Despite Massey’s prediction, supporters on either side of the abortion issue have indicated they are going continue their efforts, especially considering this is an election year for both the House and Senate.

A lot of powerful people at the Statehouse are unhappy with the University of South Carolina board, including leaders in the House and Senate.

The Legislature’s exasperation comes from the troubled presidential search that tested the patience of supporters and critics of the board’s final choice, former West Point Superintendent Bob Caslen.

Separate bills in the House and Senate would cut the number of USC trustees, now numbering 20, nearly in half after removing all the current board members. The state’s largest college would have its smallest board under either of the proposals.

A House subcommittee moved forward its USC board-trimming bill nearly a week before the session starts Tuesday. A Senate panel that’s meeting on the second day of the session is expected to follow suit.

Meanwhile, seven trustees are up for reelection later this year. But, in a sign of frustration, four incumbents are facing challengers.

Revelations of corruption exposed by The Post and Courier prompted new calls for more accountability for South Carolina’s sheriffs and other proposals that would amount to the most sweeping changes to the state’s judicial system in two decades.

Sen. Tom Davis, a Beaufort Republican, filed legislation in December that would bolster the required training among South Carolina’s more than 300 magistrates, many of whom are not lawyers. It would also add a layer of scrutiny to their appointments, which Davis and others have decried as a process rife with politics.

Unlike any other state, South Carolina allows state senators to hand-pick magistrates with almost no oversight. Davis’ proposal would eliminate that practice, requiring each magistrate appointment also receive sign-off from House representatives in each delegation.

Among another group of powerful county officials, South Carolina sheriffs, misconduct also has piled up. At least 14 of the state’s sheriffs have been accused of breaking laws in the past decade, including several in recent weeks.

A proposal from John Crangle, the state's former Common Cause director, aims to rein in those habits by bolstering whistleblower protections and requiring a semi-regular inspection of each sheriff’s office by the state inspector general.

Editorial: 6 ways SC Legislature can make our state better in 2020

When the 2020 SC legislative session opens Tuesday, lawmakers need to improve education, settle on Santee Cooper, protect our natural resources, get state spending right and rein in abuse of office. Here's how.