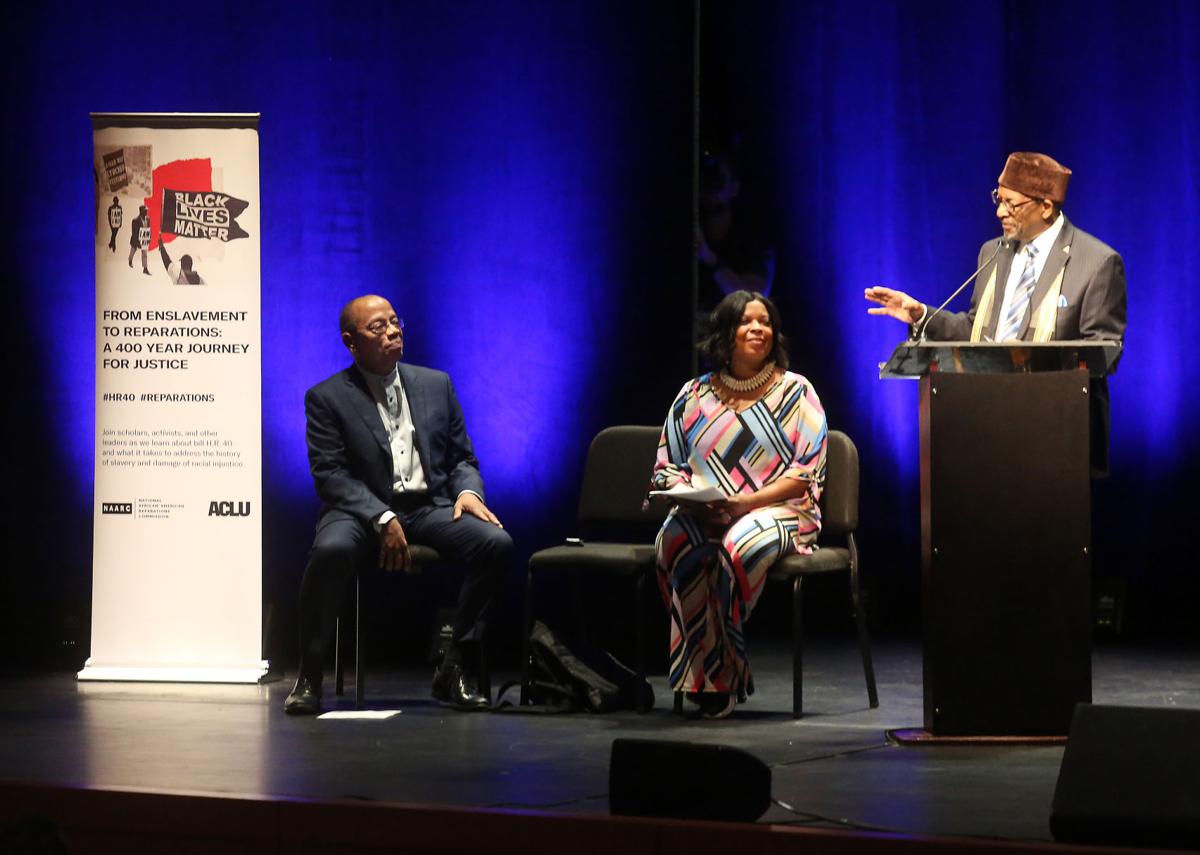 Jeffery Robinson with the ACLU (from left) and Trudy Grant with the National Action Network listen as Dr. Ron Daniels with the National African American Reparations Commission speaks during a national forum on reparations for slavery at the Charleston Gaillard Center on Saturday, Nov., 2, 2019. Brad Nettles/Staff 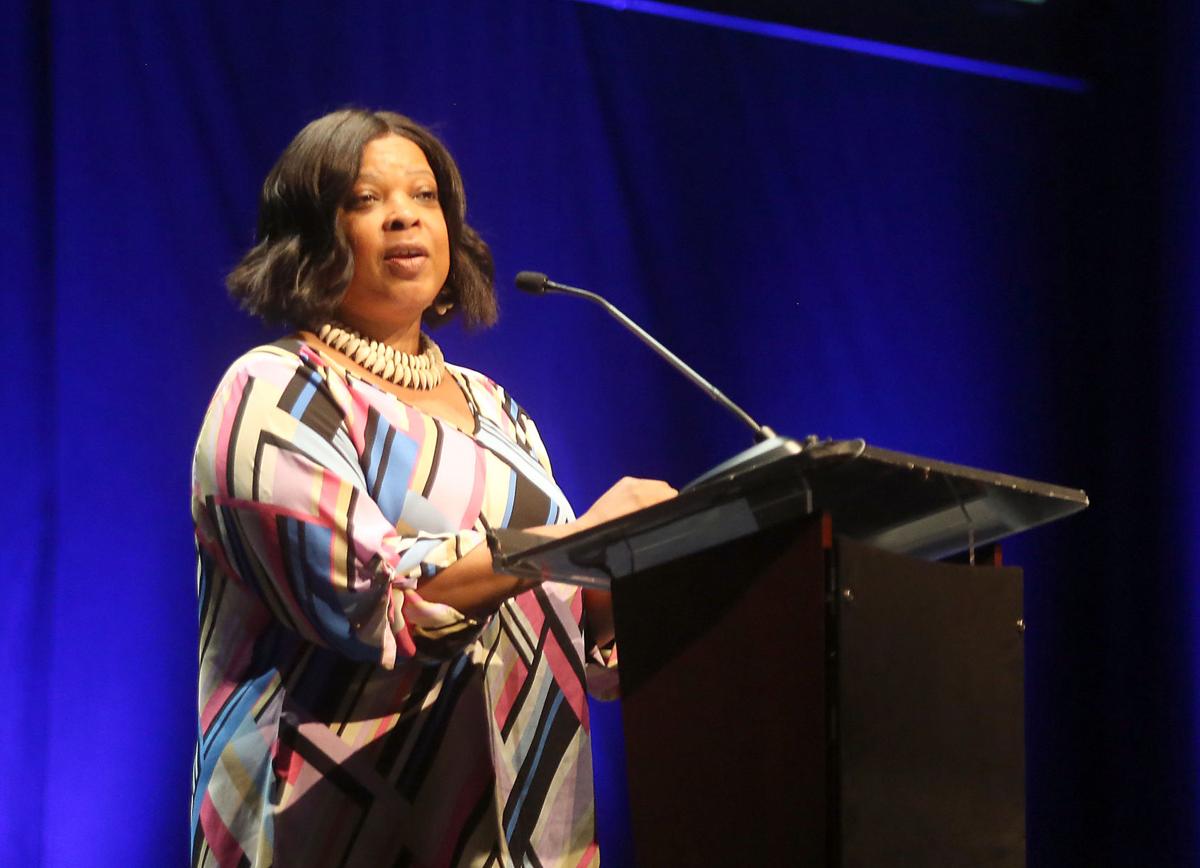 Trudy Grant, the National Action Network, speaks during a national forum on reparations for slavery at the Charleston Gaillard Center on Saturday, Nov. 2, 2019. Brad Nettles/Staff 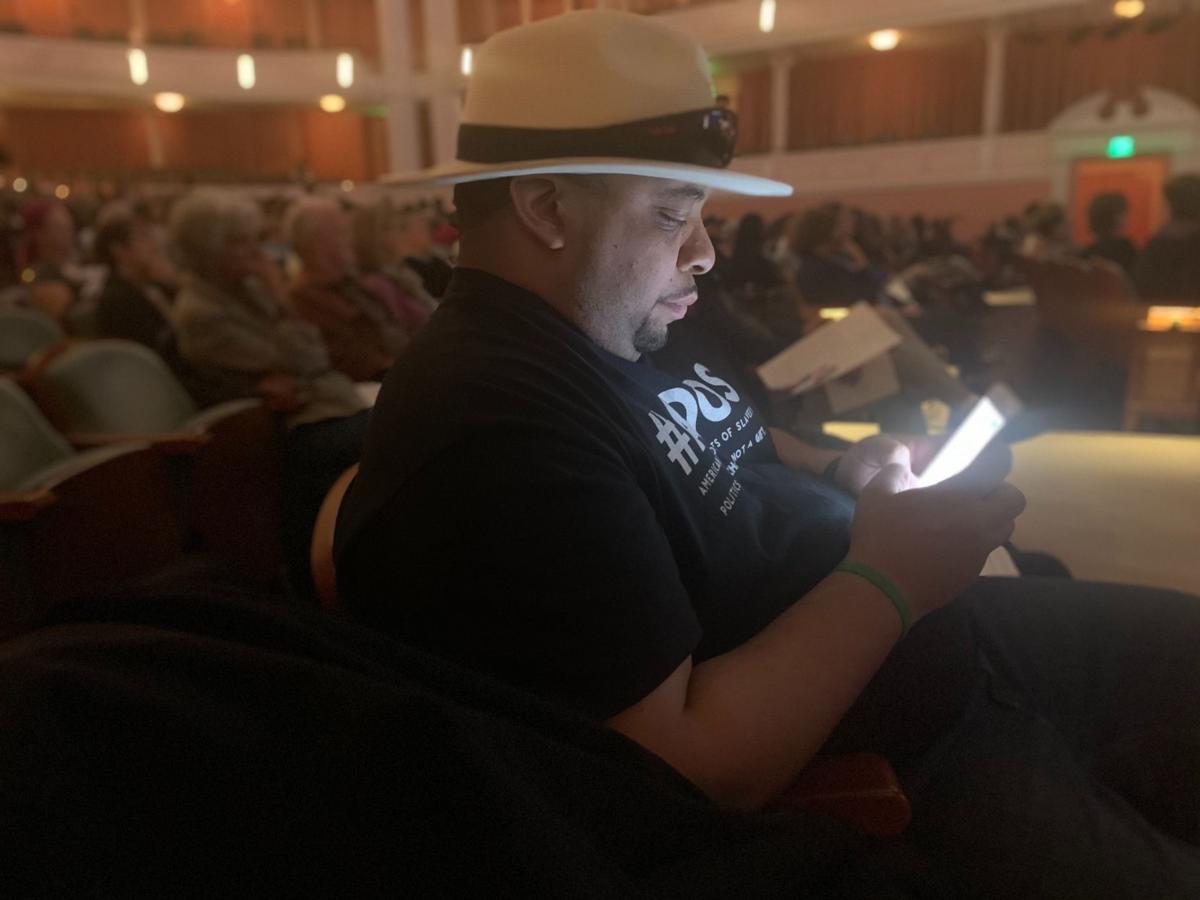 Jameion Fowler, of Myrtle Beach, writes questions on his phone at a national forum in Charleston hosted by the ACLU and the National African American Reparations Commission on Saturday, Nov. 2, 2019. Fowler is a descendant of American slaves, and this year has been trying to get Democratic presidential candidates on the record about cash reparations for descendants of slavery. Caitlin Byrd/Staff

Jeffery Robinson with the ACLU (from left) and Trudy Grant with the National Action Network listen as Dr. Ron Daniels with the National African American Reparations Commission speaks during a national forum on reparations for slavery at the Charleston Gaillard Center on Saturday, Nov., 2, 2019. Brad Nettles/Staff

Trudy Grant, the National Action Network, speaks during a national forum on reparations for slavery at the Charleston Gaillard Center on Saturday, Nov. 2, 2019. Brad Nettles/Staff

Jameion Fowler traveled two hours from his Myrtle Beach home to Charleston on Saturday, then grabbed a front-row seat for a national forum on slave reparations.

He watched inside the Gaillard Center as a video clip informed a diverse, but mostly white crowd that America's national anthem contained a third and forgotten verse that celebrated the death of African Americans who had tried to fight for their freedom by joining the British.

He listened as the Rev. Dr. Kylon Middleton led the audience of more than 400 people in prayer, asking God to grant them strength in their fight to see the passage of H.R. 40, a bill to establish a national commission to study and develop reparations.

But for the most part during the 3-hour event, Fowler sat with his head down and with his cellphone in his hands. The light from the screen illuminated his face and highlighted the white text written across his black T-shirt: #ADOS — a hashtag for American descendants of slavery, and shorthand for Fowler's identity.

"My father's family were the descendants of slaves in Columbus County, N.C.," he said, noting he learned about his lineage as a child growing up in Myrtle Beach.

Fowler said his family can trace its roots to enslaved people in the Carolinas as far back as the 1700s. As a child, this family history gave Fowler a sense of pride, and it still does today.

But now, at age 37, Fowler is old enough to know how his family's beginnings in America may have adversely impacted his life, too, including from where his parents lived, to why his father, who was born in 1932, worked as a sharecropper.

His parents weren't able to go to college.

Fowler went to the University of South Carolina but said he is still paying off his student loans. He cited the racial wealth gap, noting the average African American household in South Carolina has around $14,000 in net worth compared to around $133,000 for the average white household.

"We're still dealing with the aftereffects of slavery even to this very day. We're at an economic disadvantage, and that economic disadvantage can be correlated or linked directly to slavery, to Jim Crow, to redlining, to gentrification, to all of these things," he said. "That has to be corrected."

During a moderated panel discussion, some in the audience cried out when faced with the links between America's attitude toward slavery historically and its impact on institutions today, such as the criminal justice system.

Attorney Nkechi Taifa, a civil rights advocate, noted Article Four of the U.S. Constitution originally contained the "fugitive slave clause," which said any escaped slave, even if they had fled to a free state, would be constitutionally required to be returned to his or her owner.

Taifa said it was part of a larger attempt to snuff out any form of resistance by black people, and she talked about how it continues to this century.

"When we see that video of the ruthless pursuit of the chasing and gunning down of Walter Scott in South Carolina like a runaway slave, when we see the gunning down of Michael Brown in Ferguson like a dog in the street, when we see Eric Garner in New York being choked to death with countless, countless others all by those who have sworn to uphold the law, we know that there is a connection between the U.S. criminal punishment system and the necessity for justice," she said to thunderous applause.

Fowler, however, was quiet, although he agreed with her point.

But he wouldn't get any tangibles, at least not during Saturday's event.

When the question and answer portion arrived, time ran out before Fowler got to ask his question about what could be done to implore the city of Charleston to direct some of its resources into impoverished communities of descendants of American slaves.