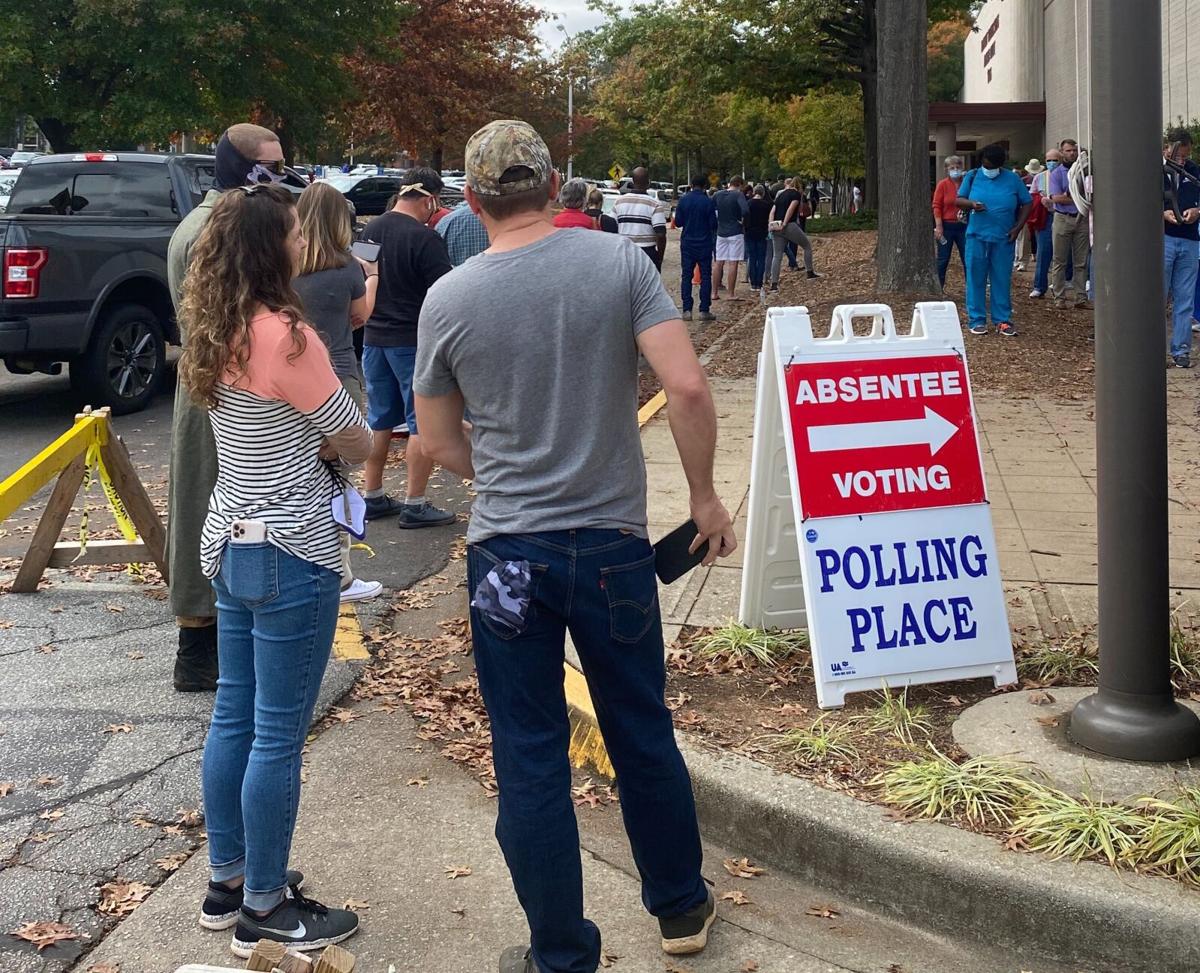 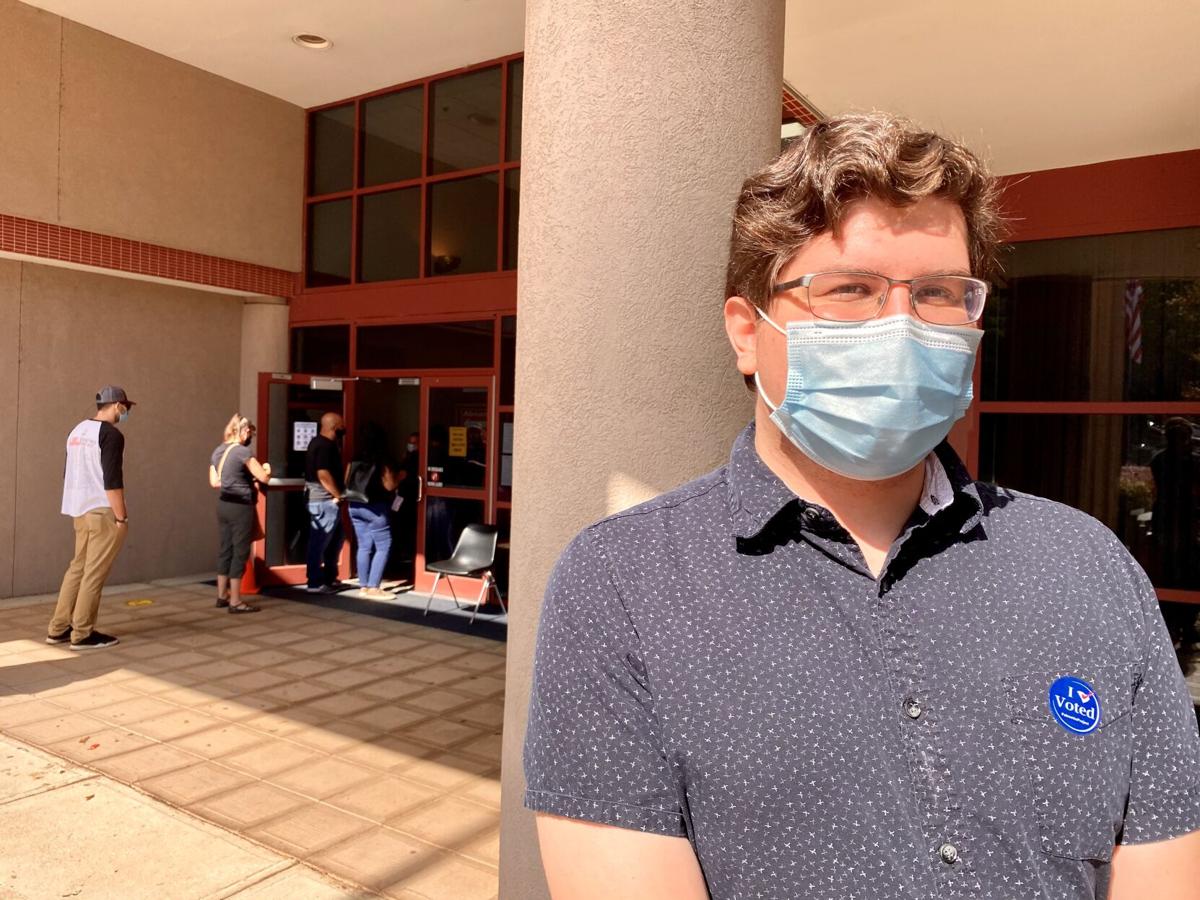 Joel Milliken of Greenville stood in line for more than two hours on Tuesday, Oct. 27 2020, to vote at County Square. Anna Mitchell/Staff 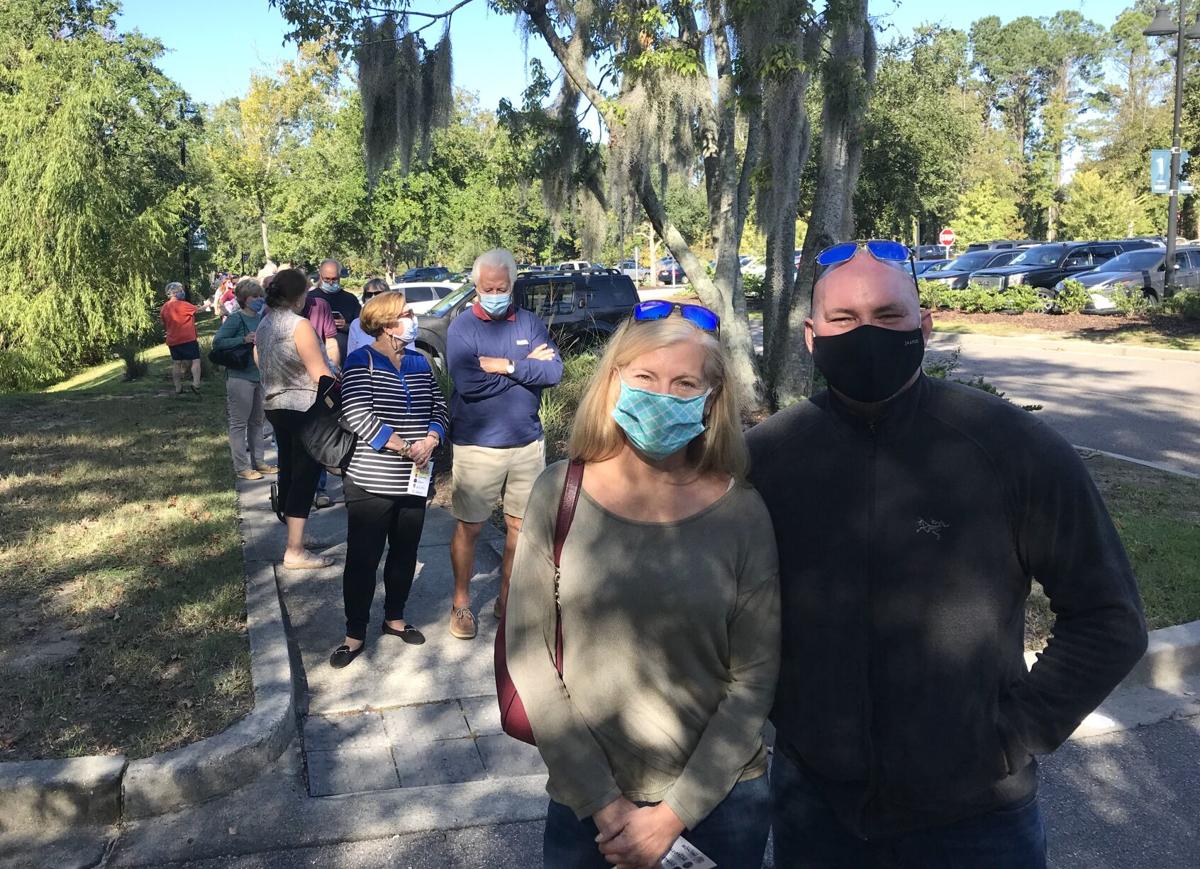 Democratic-leaning Charleston is among seven counties in South Carolina where more than a third of registered voters have already cast ballots for the general election.

Statewide, more than 28 percent of voters had cast ballots by noon Wednesday, but turnout was below average in 19 of the 31 counties that helped Republican Donald Trump win the presidency four years ago.

The majority of the 15 counties that went for Hillary Clinton in the 2016 election have seen turnout above the state average.

In states where voters register by party, Democrats have been turning out in larger percentages to cast ballots early or by mail. South Carolina does not register voters by party, but in 40 of 46 counties, early voting turnout has been highest among Black voters, and South Carolina's Black voters have supported Democrats overwhelmingly in recent elections.

The 10 counties with the highest early turnout include six that went for Clinton, including Charleston and Richland, and four that helped Trump, including Georgetown and Beaufort.

In Charleston County, 120,272 people had voted by noon Wednesday. That's a huge number considering the county's voters cast a total of 179,115 ballots in 2016. For this election, the county has 316,417 registered voters.

More than 1 million South Carolinians have cast ballots this year, doubling the record for absentee voting set in the 2016 general election.

In Horry County's Carolina Forest community Wednesday, Angela Naples was in line to vote at the local library at 9 a.m., along with hundreds of others. She wore a Halloween-themed face mask with little bats on it and decided to vote early because she was concerned about potentially long lines on Election Day.

"I think most people see this as the safer option," she said. "A lot of people don't want to go out on Election Day."

Across the state at Greenville's Donaldson Airport on Tuesday, Larry Stagg of Duncan was walking in to a rally featuring Republican Vice President Mike Pence. Stagg, 57, said he planned to vote on Election Day because "that's the day we're supposed to vote."

"All the pre-voting and the mail-in voting, it's a good idea during COVID, but I think it's above and beyond," Stagg said.

In the hotly contested U.S. Senate race between incumbent South Carolina Republican Lindsey Graham and Democrat Jaime Harrison, both candidates' campaigns say the historic turnout numbers across the state point to victory for them.

"We expect this to continue through Election Day, and when all is said and done, Sen. Graham will emerge victorious," said T.W. Arrighi of the Graham campaign.

"The energy in South Carolina is incredible and a true testament that the momentum of this race is on Jaime's side," said Guy King, Harrison's spokesman.

No-excuse absentee voting, due to COVID-19, has allowed all of the state's registered voters to cast ballots in person or by mail.

Early turnout has varied widely between counties, with just 20.4 percent voting in Greenville County — the state's most populous county, which Trump won by more than 53,000 votes four years ago — while 38 percent had voted in Charleston County.

Tuesday in Greenville there was no evidence of the below-average turnout state officials have recorded. Instead, hundreds of voters waited in line for two hours or more at County Square to cast their ballots.

Some said turnout would likely be higher if the wait wasn't so long, and a few did give up and leave.

"It's disenfranchisement," said Joel Milliken of Greenville, who voted after a 2 hour and 15 minute wait. "A lot of people who are working every single day, who can't really make the time, won't be able to do this and won't be able to have their voices heard."

Greenville County Director of Voter Registration and Elections Conway Belangia said this week that lines to vote should be shorter on Nov. 3.

“You won’t have these kinds of lines on Election Day," he said. "It just won’t happen.”

Across the country, volunteers have been showing up at early voting locations to play music, lead dances or offer snacks while people wait in line. Cynthia McCollin and a friend were at County Square passing out Krispy Kreme doughnuts (with tongs) from a stack of boxes they towed in a little red wagon.

"No one should have to wait like this," said McCollin, who added that she's been a poll worker in Greer but won't be doing that this year because she's older and worried about the coronavirus.

Greenville official on early voting: 'You won't have these kind of lines on Election Day'

Not far away, at the Pence airport hangar rally, U.S. Rep. Jeff Duncan, R-Laurens, asked the crowd of more than 1,000 how many people had already voted. There was a modest cheer, but when Duncan asked how many were waiting to vote on Election Day the crowd roared with excitement.

Roy Rogers, a retired school fundraiser from Spartanburg, was an exception. Anticipating long lines on Election Day, he voted early at Spartanburg Auditorium and said it only took about 15 minutes.

Jana Milner, a Greenville business owner and Air Force veteran who attended the rally, also said she had already voted.

Turnout is the percentage of registered voters who cast ballots. Most votes in South Carolina are cast by White residents, who account for roughly two-thirds of the state's population. As of noon Wednesday, White voters accounted for 679,230 of the 1,012,868 votes cast.

In Beaufort County, retiree Walter Quackenbush wondered Wednesday if all the mail-in voting will cause problems. He said he's never had to wait more than 15 minutes to vote in person and plans to do so this year.

Voter turnout as of noon Wednesday in South Carolina's 46 counties.