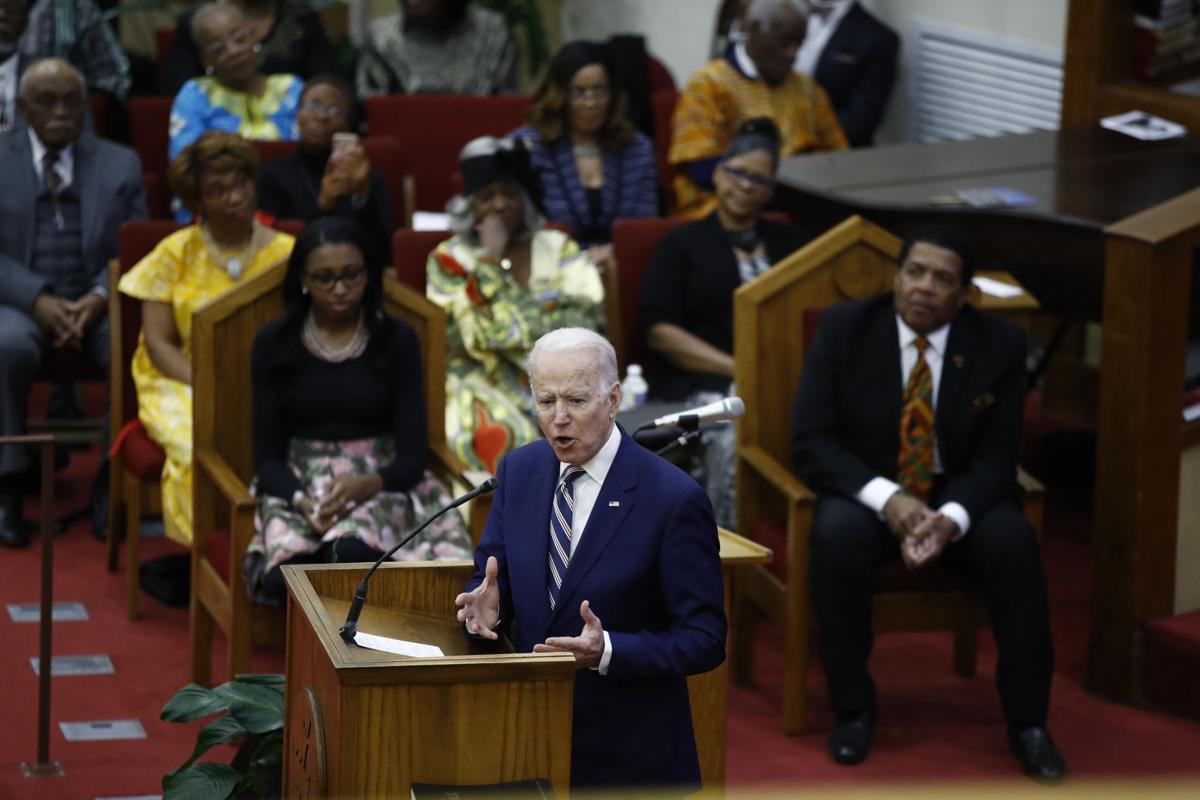 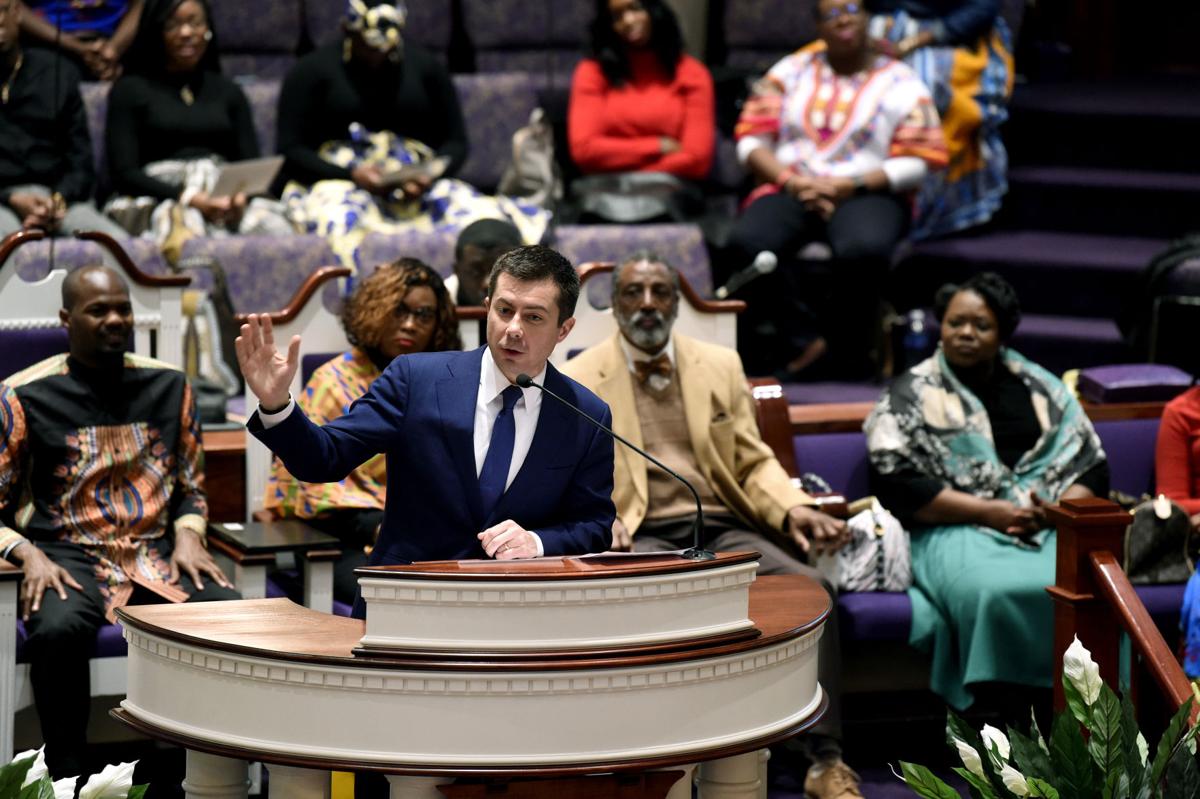 Former vice president Joe Biden caught a red-eye flight from Las Vegas to make sure he got to the North Charleston church on time Sunday morning.

Across town, former Indiana mayor Pete Buttigieg spoke in the pulpit of a Baptist church on James Island.

Both wore navy suits. Both came here to begin courting black voters as their window narrows to move the needle in the first-in-the-South primary state. Both took their time in the respective sanctuaries seriously and prayed.

"It is especially humbling in the middle of Black History Month to think about what it means to stand before African American voters and ask them for their vote," Buttigieg said at First Baptist Church of James Island.

Eight months ago, South Carolina took its first big step into the national spotlight when the largest gathering of presidential prospects  — 21 — arrived in Columbia with big blue dreams of a Trump-free White House.

Now, with Vermont Sen. Bernie Sanders taking the delegate lead after a top finish in Nevada, the national political moment unfolding in South Carolina is rife with uncertainty after months ago it was presumed it would bring clarity.

Can anyone stop Sanders after big showings in Iowa and New Hampshire, too? Or does it matter what happens here with Sanders' Super Tuesday prospects looking good and South Carolina's role potentially diminished?

"It is something I have tried to get my mind around because in 2008 we saw the path," said S.C. Democratic Party Chairman Trav Robertson. "With Barack Obama it was very clear to the extent that he made Iowa the 'alpha' and South Carolina the 'omega.' It was a one-two punch that propelled him forward."

Robertson added, "But this," he said of the nomination process so far, "this is such a different election cycle. It's hard to ascertain where to go."

How South Carolina responds in Saturday's primary could provide much needed clues.

The Palmetto State has long been a make-or-break contest for Democratic presidential contenders.

In 2008, this was where Obama clinched the victory he needed after winning in Iowa and losing in New Hampshire. In 2016, this was where Hillary Clinton saw her campaign turn around when the state overwhelmingly rejected Sanders and his calls for political revolution.

Neither of those victories would have been possible without the support of African American voters, who comprise about 60 percent of the state's Democratic primary electorate.

It's why Biden and Buttigieg separately spent their Sunday morning asking voters in predominantly black churches for their support.

Leah Daughtry, a longtime Democratic operative who served as CEO of the 2008 and 2016 Democratic National Convention committees, said the state's concentration of black voters makes it well-positioned to tell the nation which candidate will best represent them.

"We like to know who your people are, where you come from, if we recognize ourselves in you and do we believe you see us — and if you will still see us once you are elected," Daughtry said.

"This is the first time America will get a feel for and hear from the most consequential voting bloc in the country, and that makes us the most pivotal state in this nomination process," he said. "It will be the North Star for how we proceed as a party."

No candidate is counting on that support more than Biden, who needs a strong win to substantiate his claim that he can beat Donald Trump by building a diverse coalition.

Buttigieg, on the other hand, had just 1 percent. He sought to make his case on James Island by speaking about humility and reflecting on a passage from the book of Matthew.

In the past, black voters have traditionally coalesced around one presidential candidate, giving them an unshakable advantage at the ballot box. State Rep. Gilda Cobb-Hunter, D-Orangeburg, predicts a shift is coming.

"The black vote will be fragmented. I see a four-way split happening," said Cobb-Hunter, who said support is growing in the black community for Sanders, Massachusetts Sen. Elizabeth Warren and businessman Tom Steyer.

Cobb-Hunter recently accepted a job as national political director for the Steyer campaign, but even she concedes Biden has the advantage because of the decades-spanning relationships he has in the state.

Steyer did get some good news Sunday: He earned his spot on stage Tuesday night for the CBS debate in Charleston after getting the polling support he needed to qualify.

That debate could be especially important, since it will be the last debate before Super Tuesday, the next voting contest that occurs three days after South Carolina's Saturday primary.

After fiery Vegas act, 2020 candidates debating in SC with an eye toward Super Tuesday

The pause between the two electoral showdowns has never been smaller, casting doubt as to whether this will make the Palmetto State more or less influential in the nominating process.

South Carolina's results will have just three days to marinate in the minds of voters before 14 states vote on Super Tuesday, when 1,300 delegates are allocated in a single day.

Michael Bitzer, a political scientist at Catawba College in North Carolina — one of those Super Tuesday states — predicts no clarity will come after either two days of voting.

"The dynamics usually firm up on both sides once South Carolina happens, and can kind of put those fears to rest," he said. "I'm not sure that question will be answered."

Gibbs Knotts, a political scientist at the College of Charleston who co-authored a book about the history and role of the state's presidential primaries, said South Carolina acts not only as a demographic counterweight to the mostly white Iowa and New Hampshire results. It's also an ideological gut check.

"It is very much set up to do that," he said. "When compared to the average Democrat nationwide, South Carolina Democrats are more moderate, and more conservative. More people here go to church, and want a moderate approach to politics."

Mike McCauley, who worked in five different states during the 2008 presidential primary Obama, said South Carolina could still act as a guard rail that could stop or at least slow Sanders' rise.

"If other Democrats and Super Tuesday states are looking for an exit ramp from the way things have gone in other states, I think South Carolina can blaze that trail," he said. "You want viability in the long run, and South Carolina primary voters are pragmatists who are looking for candidates that are grounded and realistic."

In his Nevada victory speech, Sanders ignored the critics and championed himself as the party's unifier.

"We are going to win because we are bringing people together in a multi-generational, multi-racial campaign that will involve working people in the political process in a way we have never seen before," Sanders said.