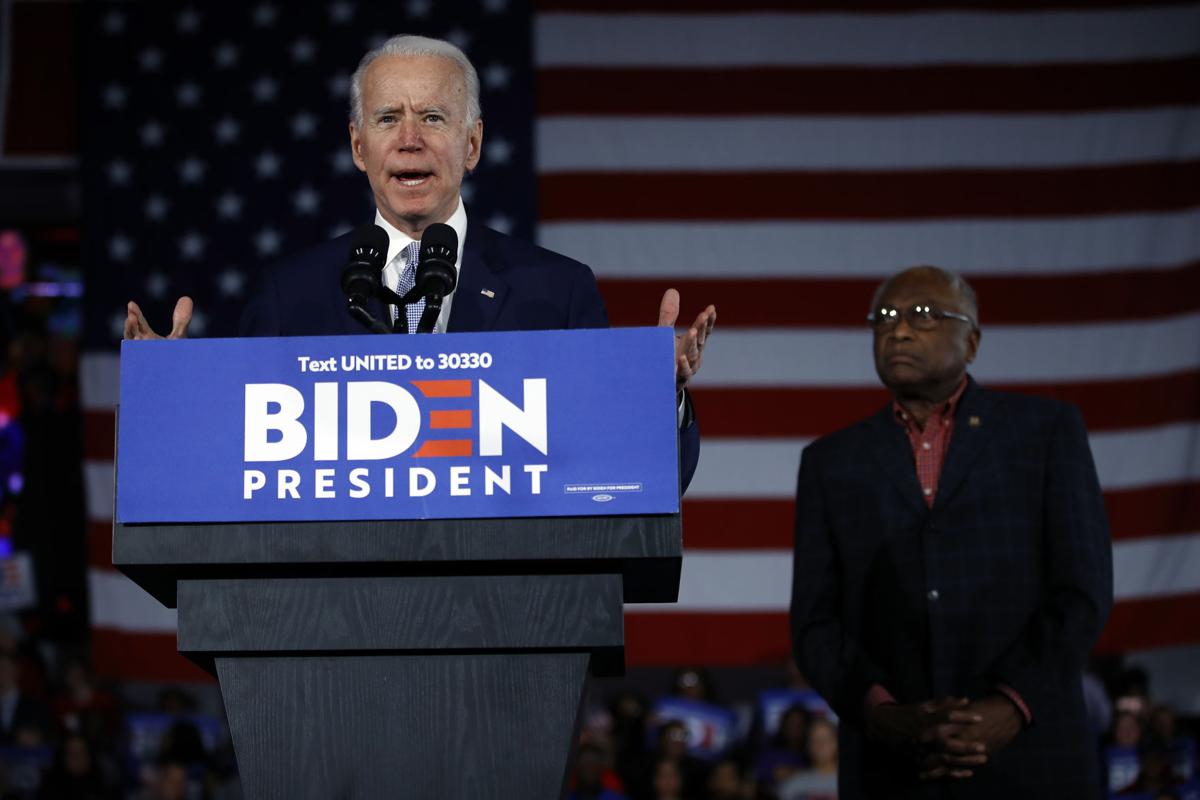 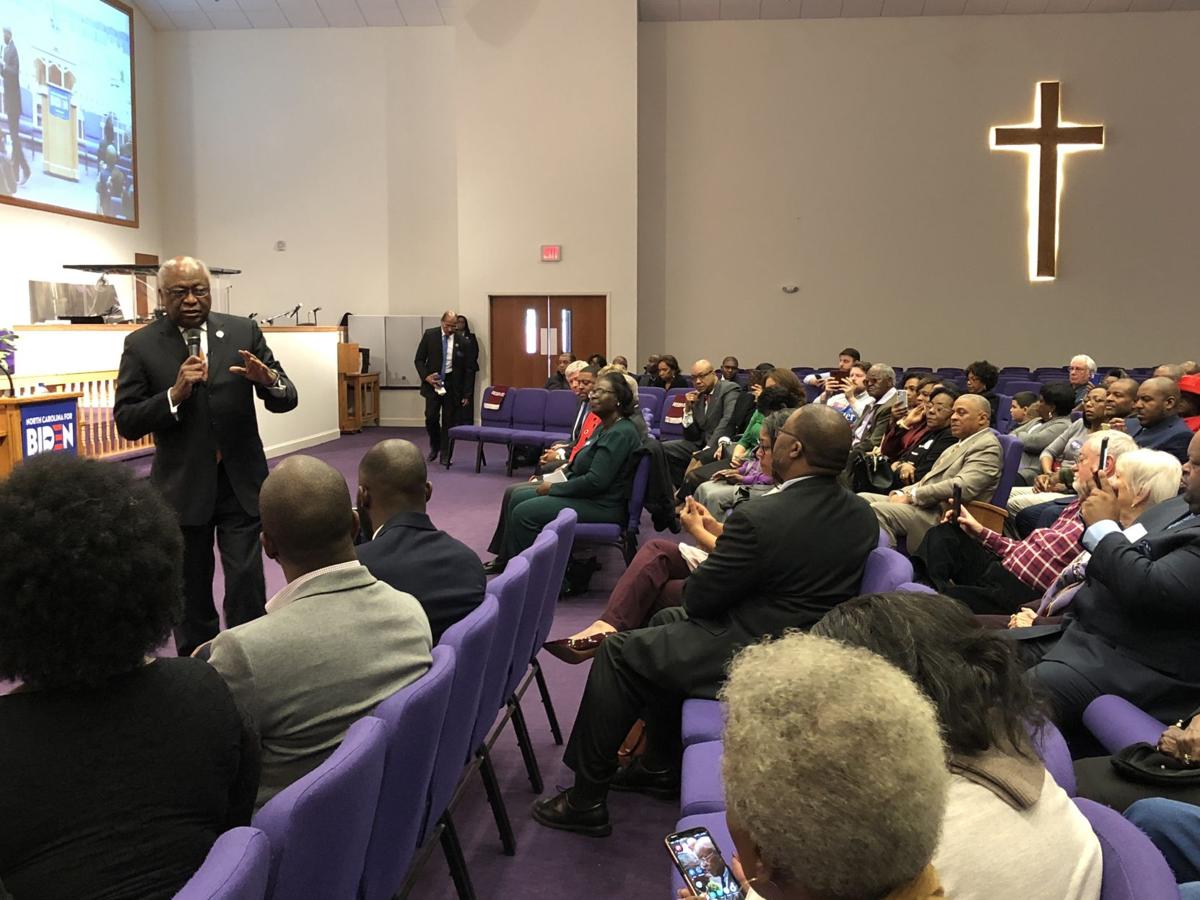 FAYETTEVILLE, N.C. — Early Sunday morning, hours after he helped lift Joe Biden to the soaring South Carolina victory that may have changed the course of the 2020 presidential race, U.S. Rep. Jim Clyburn received a text message from one of his daughters telling him he needed to get some rest.

"You're right," he told her. "When we get this election settled, I'll go some place and get some rest."

Instead of resting, Clyburn travelled to North Carolina later that day, spreading his pro-Biden message to his home state's northern neighbors, who go to the polls Tuesday. With South Carolina in the bag, Biden will now be dispatching the veteran congressman to other states this week and beyond as a one of his newest national surrogates.

In Simon Temple AME Zion Church, the Columbia Democrat was met with a standing ovation from the crowd of about 100, a lengthy photo line usually reserved to actual candidates and local elected officials who expressed no less admiration for him than he typically receives in his own state.

"He has been deemed by many as a kingmaker," said Fayetteville Mayor Mitch Colvin as he introduced Clyburn to the crowd. "And yesterday we saw him crown our king of South Carolina, Vice President Biden."

Few could have blamed Clyburn if he had listened to his daughter's advice and taken Sunday to relax.

The 79-year-old congressman had just capped a whirlwind week. He hosted a presidential debate in Charleston — during which candidates scrambled over each to drop his name as often as possible, made national news with his endorsement and headed back to Washington D.C. for work before celebrating Saturday with Biden.

It wasn't just what Clyburn did, many observers said, but how he did it — issuing an impassioned warning about what he viewed as the dire threat to the country if Biden did not win the nomination and delivering a poignant message about how much his late wife Emily had loved Biden both politically and personally.

"If you're in politics as long as I've been since 16, you get a little jaded after a while, but you knew that was straight from the heart," said Jaime Harrison, who started his career in Clyburn's office and is now the Democratic candidate challenging U.S. Sen. Lindsey Graham, R-S.C.

By the time South Carolinians cast their ballots Saturday, exit polls showed that an extraordinary 47 percent of voters in the state had been influenced by Clyburn's endorsement, sealing the deal for a huge portion of Democrats who had been undecided just a few days earlier and overhauling the national narrative.

"I don't think it's an overstatement to say that if Joe Biden eventually becomes the president of the United States," Harrison added, "it was that moment that made it possible."

'He gave the vice president his voice back'

Already Clyburn's presence has made some impact beyond the state's borders.

N.C. state Rep. Billy Richardson of Fayetteville, who spoke before Clyburn on Sunday, said he had personally only decided to back Biden after watching Clyburn's endorsement announcement on television.

"Congressman Clyburn did something that only he could do: he gave the vice president his voice back," Richardson said. "More than just influencing votes, he empowered Joe to be Joe again, and because of that America is going to find its conscience again."

Even North Carolina voters who didn't know much about Clyburn before Sunday's event said they came away viewing him as one of Biden's most effective surrogates.

"We need to put that guy on the radio," said Perry Evans, 80, a retired engineer who moved to Fayetteville from New York.

Amanda Loveday, a former Clyburn aide who is now helping to lead Biden's super PAC, said Clyburn will be a particularly valuable surrogate around the rest of the South — the region of the state that is viewed as Biden's strength but where he will need to continue running up the score to amass nominating delegates.

"He may not have the national platform of some other members of Congress, but the national story coming out of South Carolina will prove to the other 49 states that what he thinks and says matters," Loveday said. "That may not translate to Arizona, but it's definitely going to translate to our neighbors."

In an interview with The Post and Courier, Clyburn said he is under no illusions that he saved Biden from a shocking South Carolina defeat. The point of his endorsement, he said, was to run up the margin of victory and send a resounding message.

The only question for some Clyburn allies was whether the Biden campaign would be in a position to maximize the impact of it. But Clyburn had already taped ads for both Biden's campaign and his super PAC, Unite the Country, the day before, allowing them to immediately push the message wide.

That led to the party they had both been hoping for Saturday night, during which Biden turned to Clyburn early in his victory speech to underscore the role he played in the process.

"My buddy Jim Clyburn," Biden said from the stage, turning around to grab his hand. "You brought me back."

Now, newly confident in Biden's chances of winning the nomination, Clyburn is looking to replicate that success nationwide by traveling the country.

When not in Washington, he said he would accept any direction from the campaign about where they want him to go. He will head to Virginia, another Super Tuesday state, on Monday.

"I think he's going to win," Clyburn said. "But I'm trying to create a surge."

South Carolina picked Joe Biden. Will it be enough to shake up the 2020 race?

Beyond his endorsement, Clyburn also took on a far more substantial role this week as an informal Biden adviser. That gig started a week ago, when he met with Biden aboard the former aircraft carrier Yorktown in Mount Pleasant, days before he would go on to offer his endorsement.

For one, Clyburn encouraged Biden to become a more aggressive fundraiser, a practice he acknowledged can be unpleasant but will be necessary to counter Sanders' massive network of small-dollar donors.

"He's just very uncomfortable with it and it's an uncomfortable thing to do," Clyburn said. "But there are people on the sidelines who want him to ask. Some people just aren't going to give unless you ask."

But more broadly, Clyburn told Biden he needed to focus on the big picture when answering questions from voters rather than diving into the policy weeds that only the most knowledgeable wonks would understand.

Clyburn said he already saw that advice paying off in Biden's debate performance and, even more so, in a CNN town hall Wednesday night, when Biden shared how faith powered him through the loss of his family members in a back-and-forth with a pastor who lost his wife in the Mother Emanuel shooting.

Biden confirmed Sunday morning on CNN that he had taken Clyburn's advice to heart.

Clay Middleton, a strategist who — like so many South Carolina Democrats — started his political career as an intern in Clyburn's office before becoming Cory Booker's senior adviser in 2020, argued the consequential week will ultimately seal a prominent spot for Clyburn in state history.

It even had a personal impact on those around Middleton. His wife, Nicole, was planning to vote for U.S. Sen. Elizabeth Warren until Clyburn's endorsement convinced her to shift to Biden at the last minute.

"If there was any doubt about the influence, the reach, the understanding of the state of this man who has been a part of South Carolina politics for 50 years, who's the majority whip for the second time, who's the highest elected African American in the country," Middleton said, "this should put it all to rest."