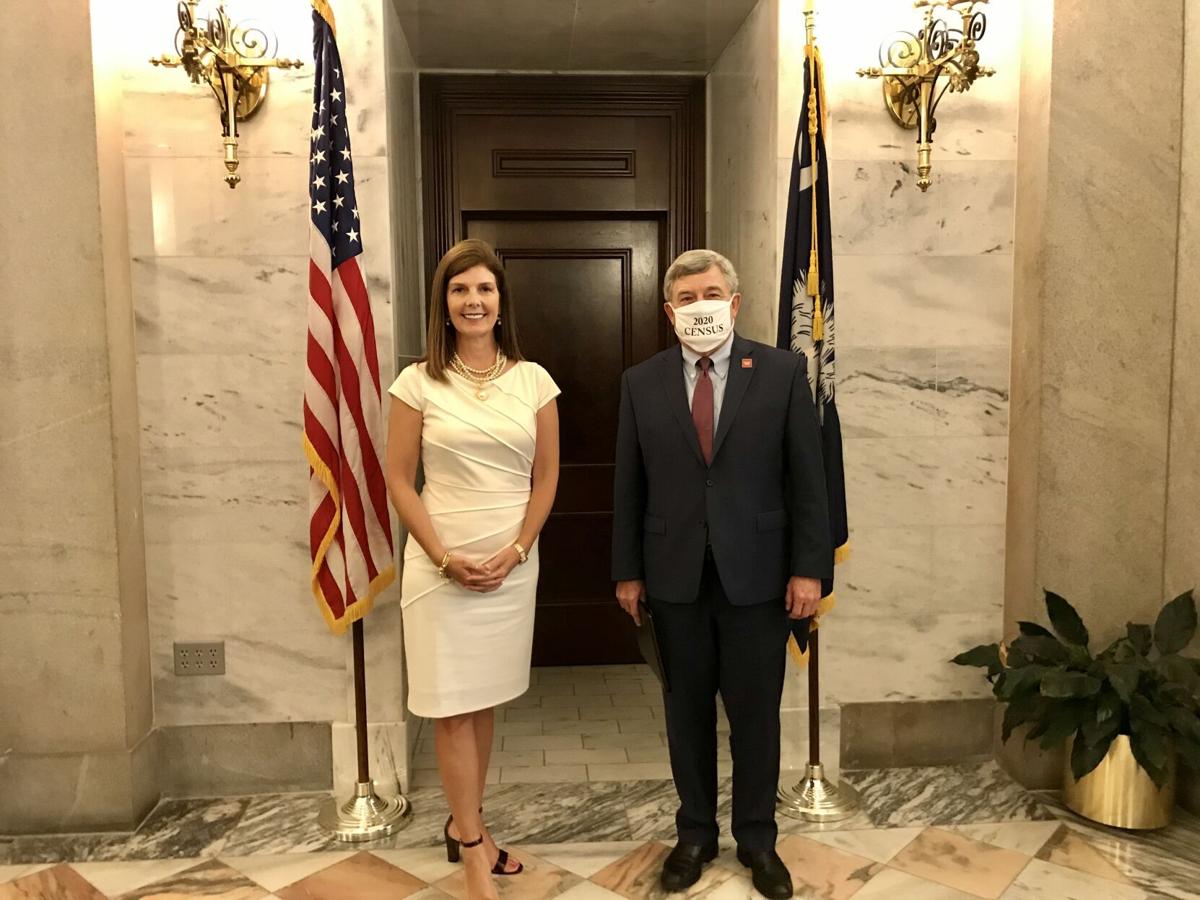 South Carolina Lt. Gov. Pam Evette and U.S. Census Bureau Director Steven Dillingham are pictured outside her office at the Statehouse on Tuesday, Aug. 18, after discussing the status of the 2020 Census count. File/Seanna Adcox/Staff 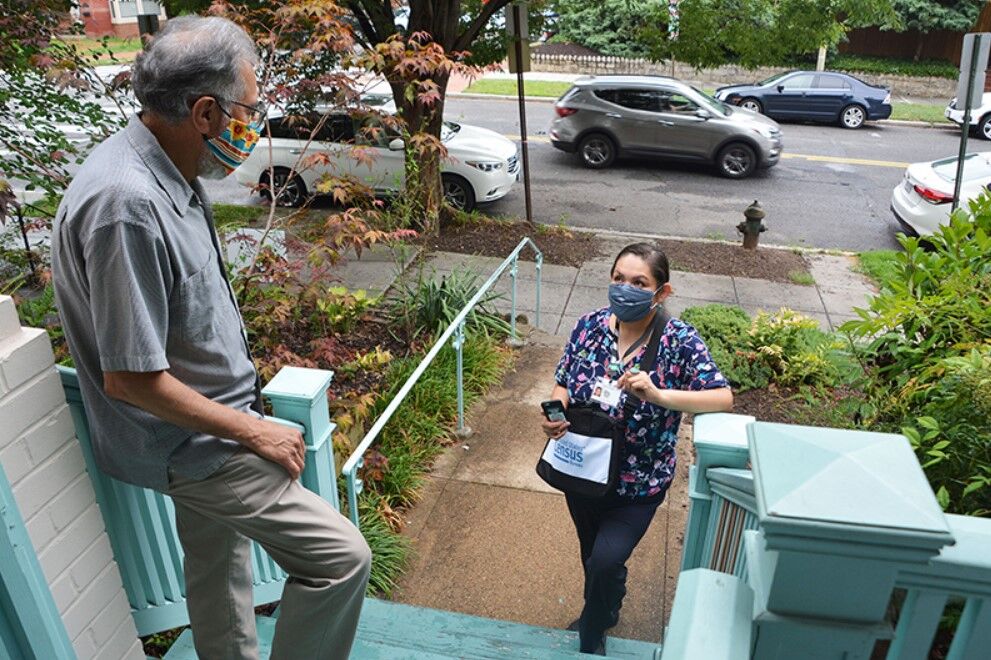 The U.S. Census Bureau requires census takers to wear a mask while conducting their work, which began in South Carolina on Aug. 11, 2020. They will have a badge, which displays their name and the census logo, and carry an iPhone, which also has the logo on back, to show they're legitimate. Provided 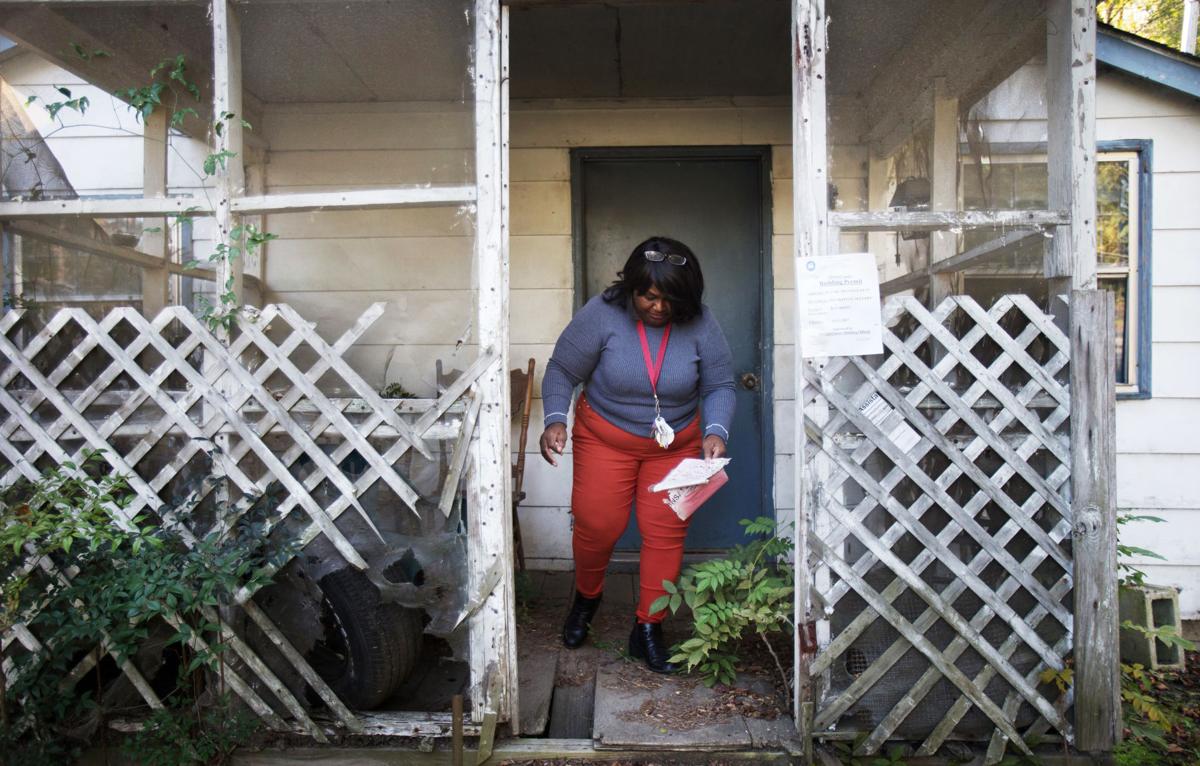 Barbara Hopkins, mayor of Sellers, picks up a sign notifying a family their home is unsafe to live in because of mold damage Wednesday Nov. 6, 2019, in Sellers. "We need all the help we can get," Hopkins said of the census effort. "That's why I'm working so hard. It's something to help them." Gavin McIntyre/Staff

COLUMBIA — In the final stretch of the 2020 census, people are fanning out across South Carolina in an effort to add everyone to official population counts that determine how the federal government divvies up more than $675 billion annually.

With just weeks to go, 78 percent of South Carolina's known addresses are tallied, meaning residents could be shortchanging themselves by millions of dollars over the next decade if they don't reply soon.

Census takers began knocking on doors Aug. 11 of homes that hadn't self-reported yet, either by phone or online — a first-ever option in the 230-year history of the decennial count. Amid the COVID-19 pandemic, even the door-to-door surveying looks different, as workers are required to wear masks and stand at least 6 feet away while, preferably, conducting the interview outside. And, in another first, they're sending in the answers using census-issued iPhones.

"People are now in your neighborhoods," Census Bureau Director Steven Dillingham recently told The Post and Courier. "If you see them, please be patient. Please be cooperative."

After all, being counted is a way to help yourself, family, and neighbors, said Lt. Gov. Pam Evette, who's leading the South Carolina 2020 Complete Count Committee formed a year ago.

McMaster forms large SC 2020 census panel: 'We want to make sure we count everybody'

The official tally determines how the federal government distributes money for schools, roads, hospitals, job training, Medicaid, disaster aid — whether for a flood, hurricane, or pandemic — and a long list of programs, including those that help South Carolina's growing elderly population live independently. The numbers decide not only how much the state receives, but how money is dispersed within its borders.

"It affects every single person in some way, whether it’s them personally or a family member they love," Evette said. "When you go through the list of what the census does, people say, 'I didn’t realize it does that.'"

It also determines representation in Congress. South Carolina gained a seventh U.S. House seat after the 2010 census shifted 23 of that chamber's 435 members. In all, eight states were winners — with Texas gaining the most, at four — while 10 lost representation. New York and Ohio each lost two seats.

The count ends Sept. 30, a month sooner than planned under the schedule adjusted after the pandemic hit.

Originally set to end July 31, the count was pushed through October amid the uncertainty, and the bureau asked Congress to extend its reporting deadline from Dec. 31 to April 2021. When Congress failed to act before taking its August break, the bureau moved up field operations, a move roundly criticized by Democrats, who say it will result in under-reporting of minorities.

The bureau contends it was simply a matter of meeting its own due date, so it can process, verify and tabulate the confidential information and supply the statistical data to Congress as required by federal law.

And Dillingham insists the technology used this year, coupled with extended hours of roughly 500,000 door-knockers nationwide — incentivized by new bonuses of up to $800 over a three-week period on top of wages that, in South Carolina, range between $14.50 and $21 an hour — means people are being found and counted faster than ever before.

For the first time, workers in call centers are calling out to both landlines and cellphones, in addition to answering the bureau's toll-free lines. And a nighttime operation specifically for counting the homeless is set for Sept. 22-24.

"We’re finding the productivity is much higher than we imagined," said Dillingham, an Orangeburg native who took the bureau's helm in January 2019. "We’re much more productive per person, per hour."

When the Winthrop University graduate knocked on doors himself Aug. 17 in a poor neighborhood of Rock Hill, he added nine families to the tally in less than two hours.

With funding at stake, SC communities struggle to get residents counted in census

South Carolina's Complete Count Committee has partnered with hundreds of state and local agencies, nonprofits and businesses statewide, creating one of the largest combined efforts of any state, according to Dillingham.

Yet, as of Sept. 3, South Carolina's 78 percent response rate ranked 46th nationwide. Idaho ranked first, at 97.7 percent of addresses counted, while Alabama and Georgia tied for last at 76.6 percent, including both self-responders and those counted by door-knockers, according to Census Bureau data.

The nation's decennial census count ends Sept. 30. Here's a look at the nation's best and worst household response rates as of Thursday. The percentages include both people who self-responded and those tallied by census takers who started knocking on doors last month.

Only 59 percent of South Carolina's addresses had self-responded.

But even in counties at the top of the list, there are areas where participation is below 30 percent, as seen in maps that provide data down to the neighborhood level.

The "Count Me In" video released in May — featuring South Carolina celebrities including Darius Rucker, Dabo Swinney, Dawn Staley, and Edwin McCain — wasn't the "show stopper" Evette thought it would be. So she's been calling mayors, legislators, pastors, and other community leaders people recognize to get the word out locally.

"We're really reaching out to all those people who people trust so they can feel like, 'OK, this is good. This is something I should do,'" she said.

One of those mayors was Barbara Hopkins, mayor of tiny Sellers in Marion County. The town of just 219, according to the 2000 census, is still struggling to get help for residents forced from their homes by catastrophic, back-to-back flooding in 2015 and 2016 resulting from hurricanes Joaquin and Matthew.

Some of the residents are still staying with family members elsewhere but getting their mail in Sellers.

South Carolina's 65-plus population soars as the 'silver tsunami' continues

"A lot of people don't know how important it is, so I go out to the homes to be an advocate to make sure our town is counted," said Hopkins, who by late August had visited 53 of the 78 homes within the town shaped like a baseball field's home plate.

"We need all the help we can get," she said. "That's why I'm working so hard. It's something to help them."

People can still avoid someone coming to their doorstep by going to 2020census.gov or calling toll-free numbers answered in 14 different languages.

"If you don’t want someone knocking on your door, you can do it quickly and safely without any human interaction," Dillingham said.

Charleston's 350 years old, but most of the city's growth happened during the last 50