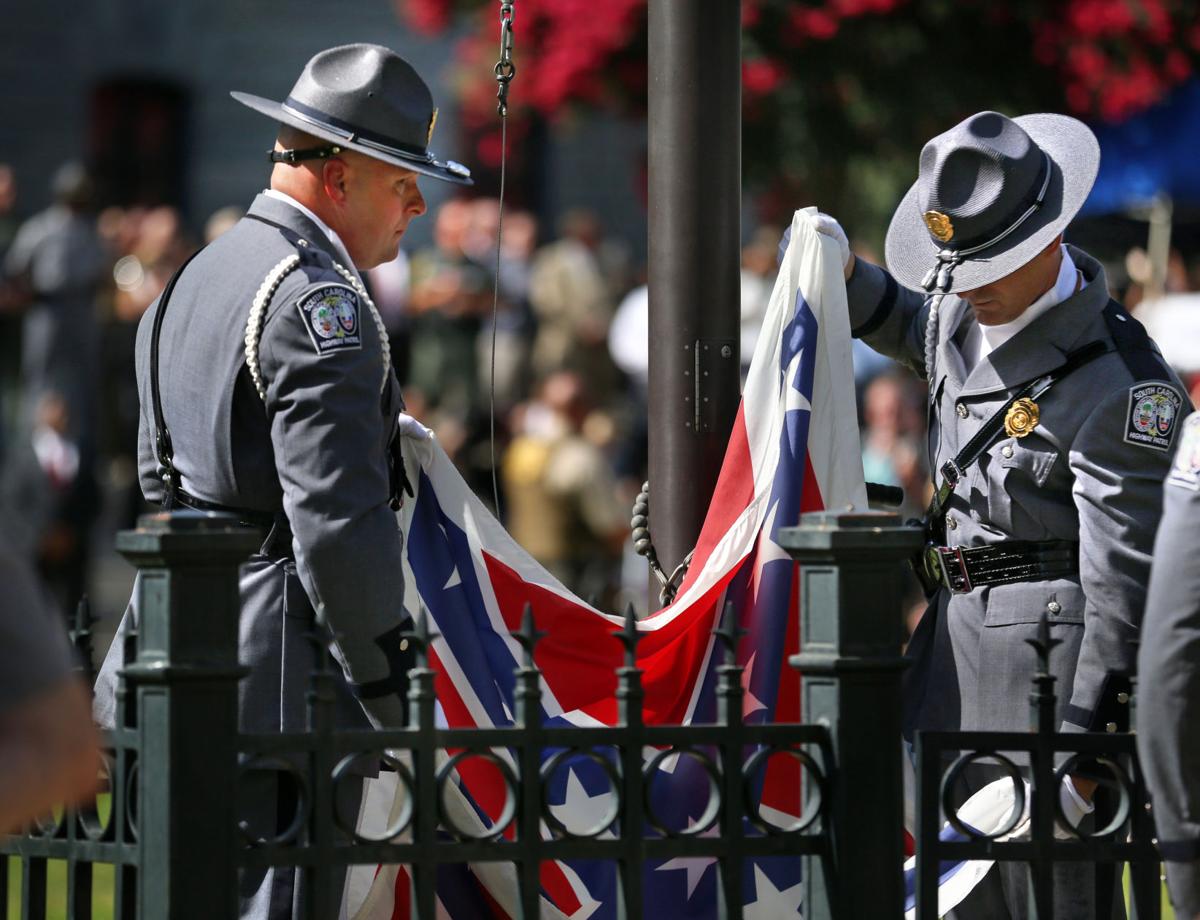 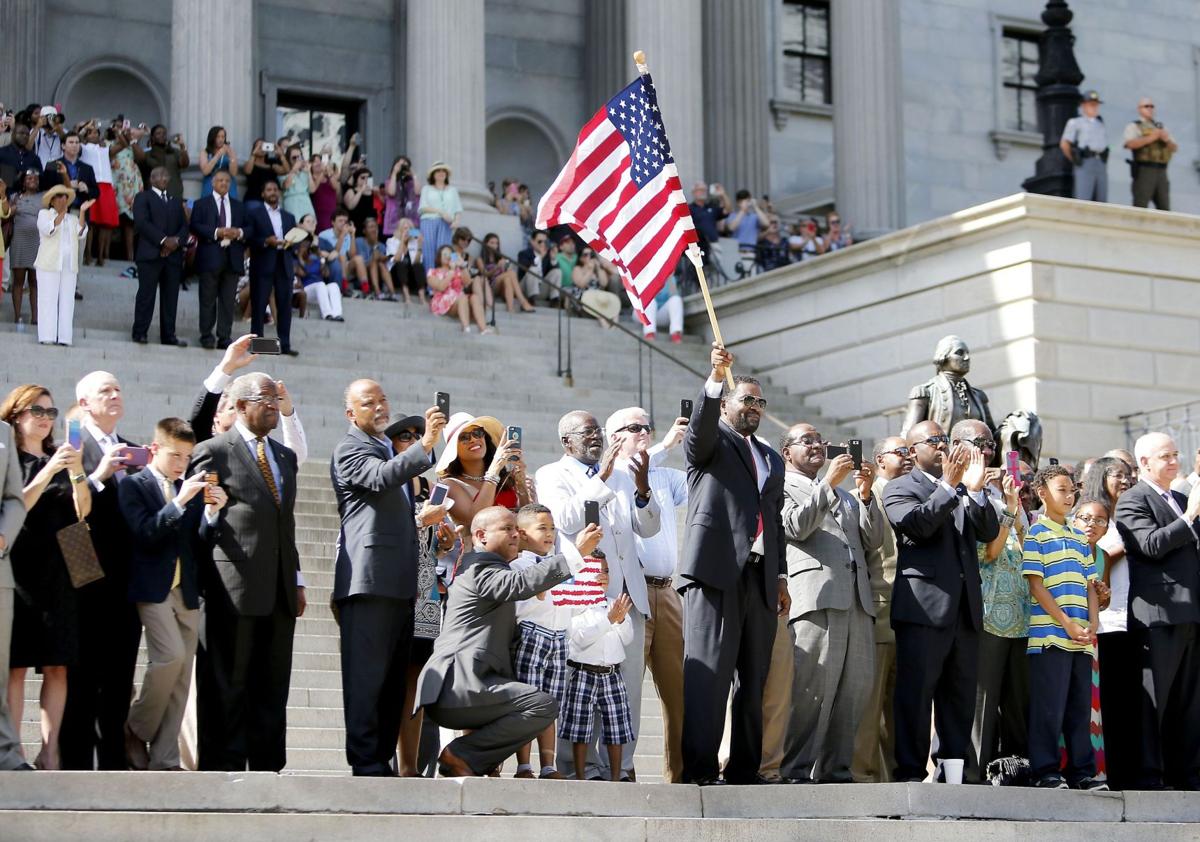 Representatives and their families stand on the Statehouse steps to watch as members of the Highway Patrol Honor Guard take down the Confederate battle flag Friday, July 10, 2015 at the Statehouse in Columbia. File/Staff 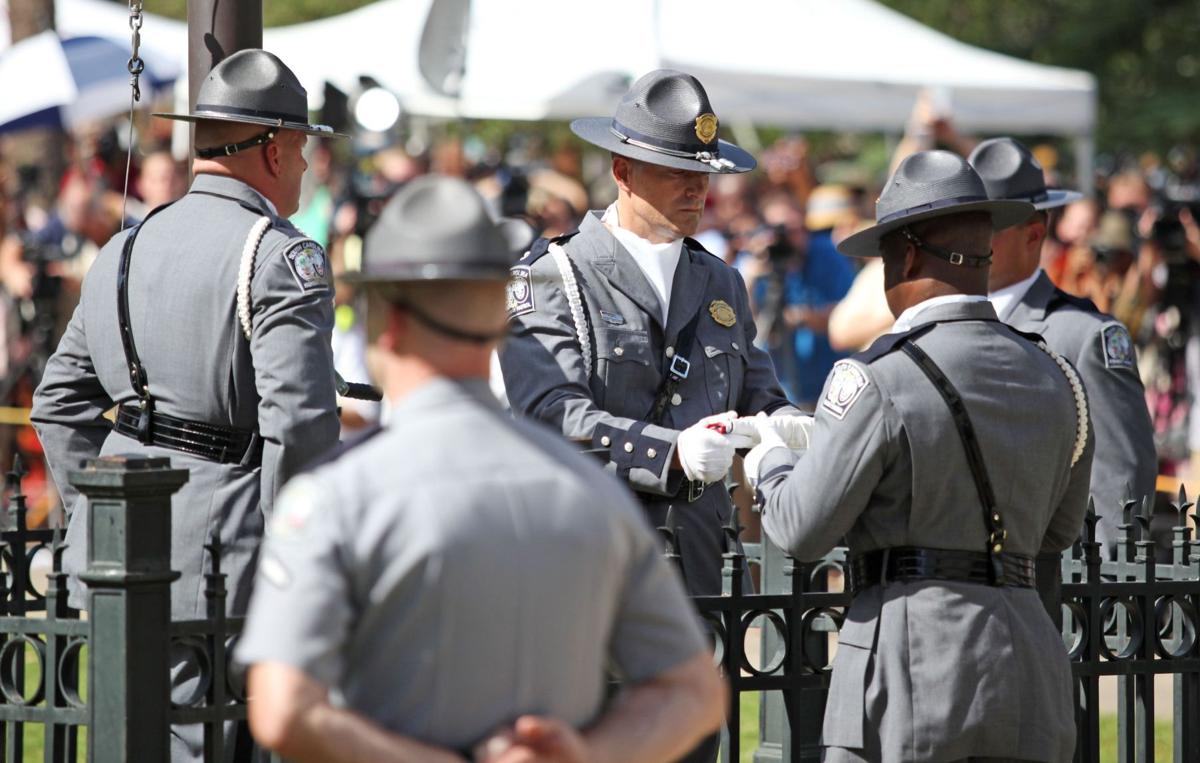 A State Highway Patrol officer hands the Confederate battle flag to another officer after being lowered from the Statehouse grounds in Columbia, SC, on Friday, July 10, 2015. File/Staff 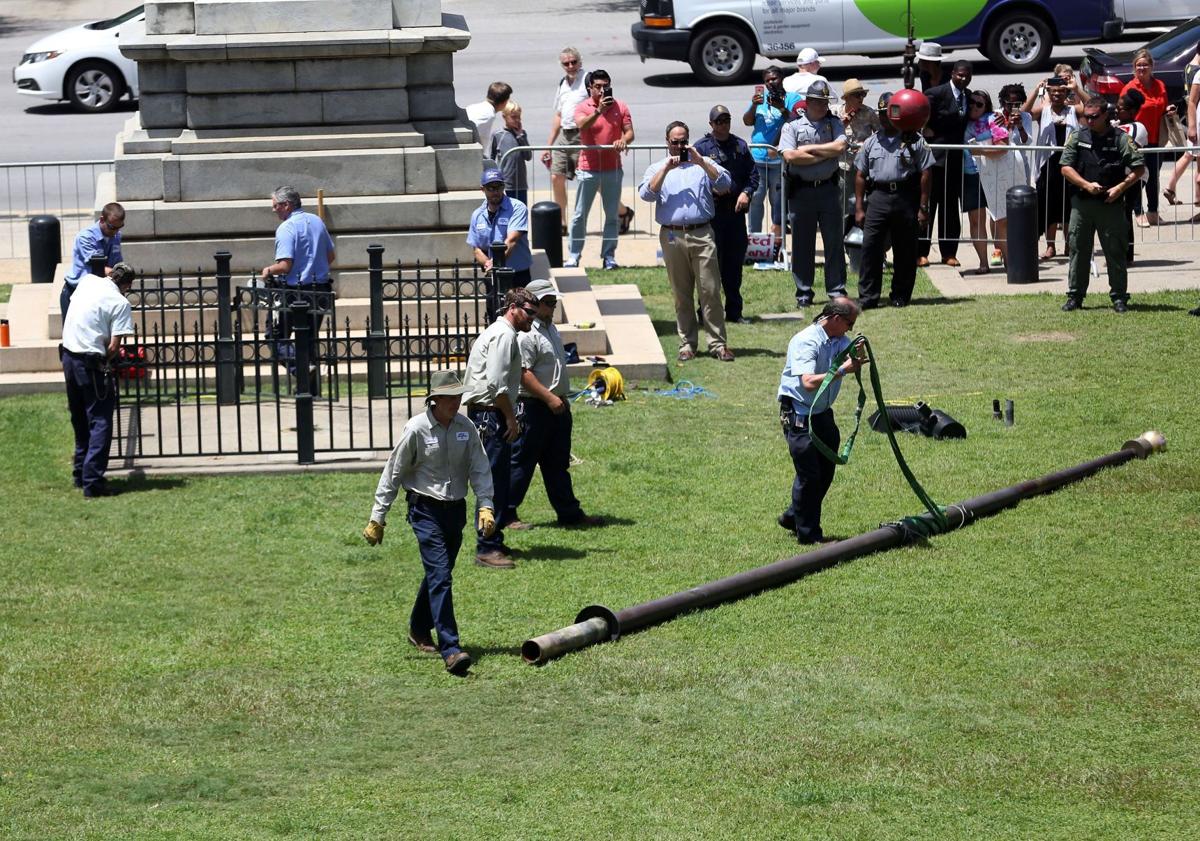 Construction crews dismantle the pole and fence that surrounded the Confederate battle flag that was removed from the Statehouse grounds Friday, July 10, 2015, in Columbia, S.C. File/Grace Beahm/Staff 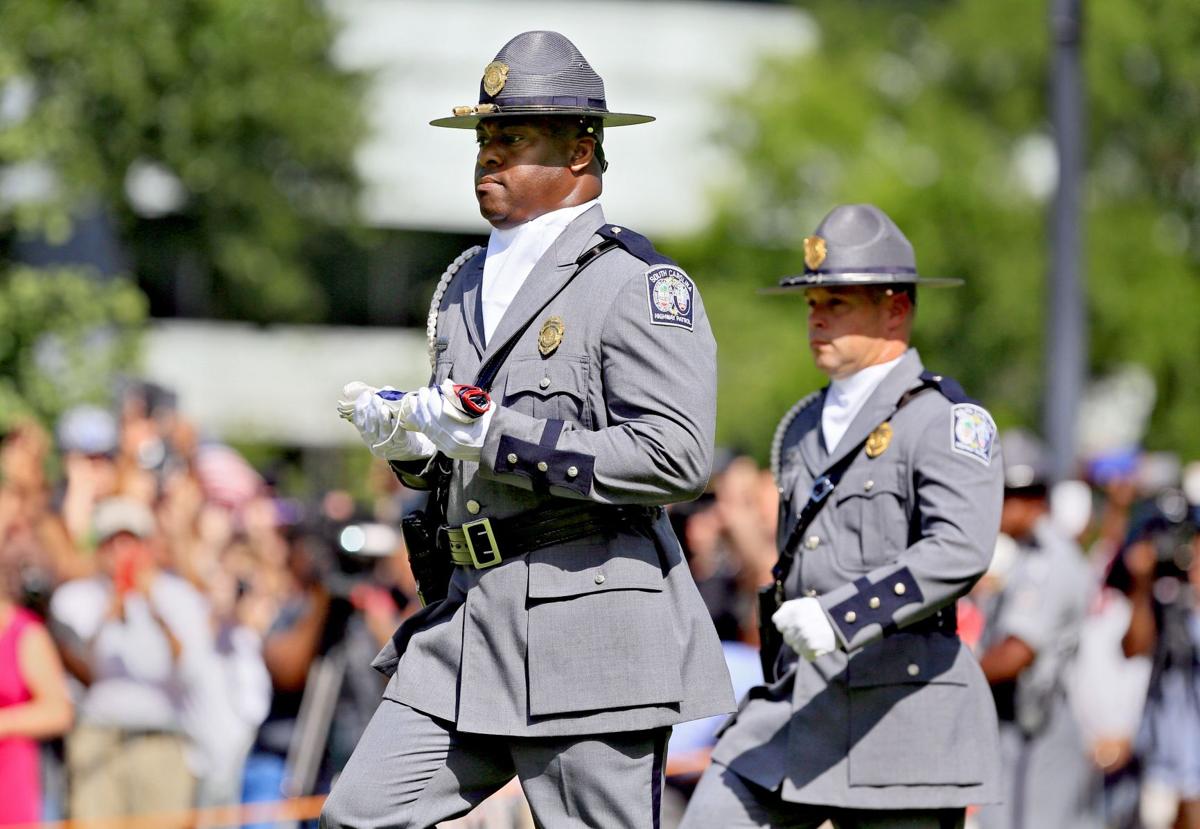 Members of the Highway Patrol Honor Guard carry the Confederate battle flag after taking it down Friday, July 10, 2015 at the Statehouse in Columbia. File/Staff 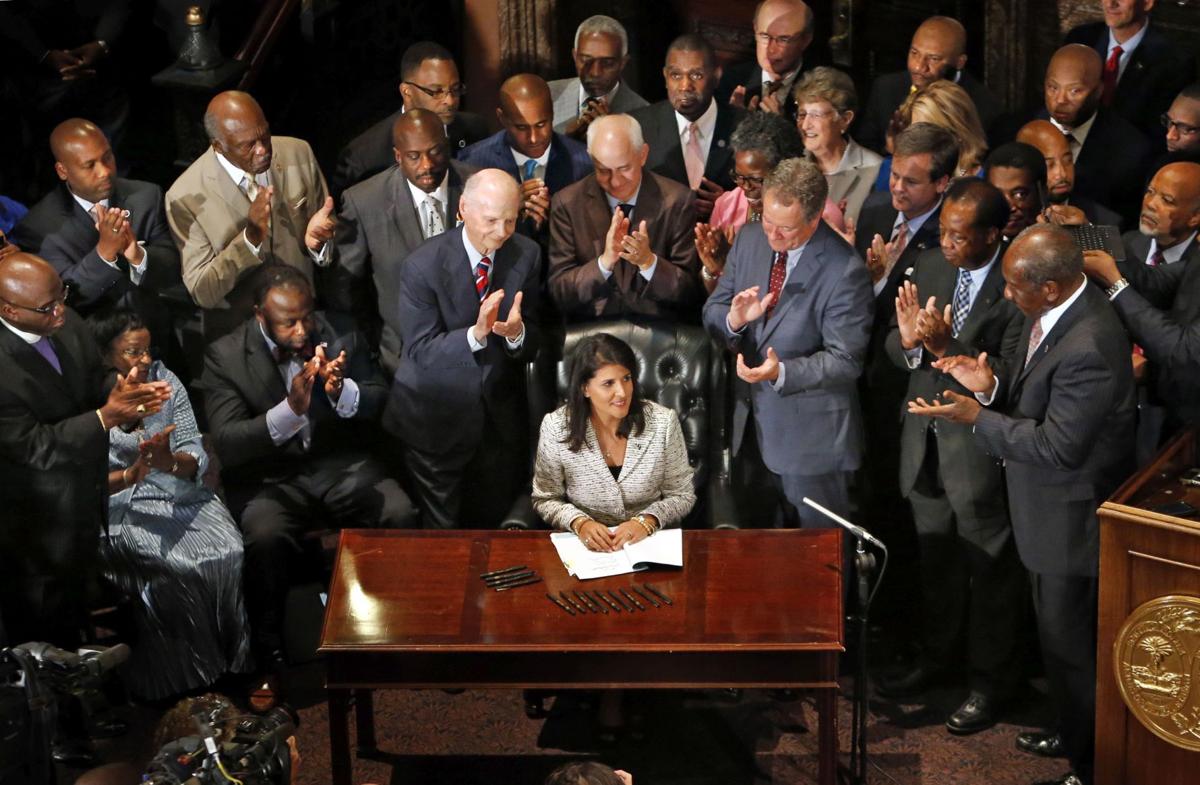 Cheering and applause fill the rotunda as South Carolina Gov. Nikki Haley, surrounded by former South Carolina governors and state lawmakers, signs a bill into law removing the Confederate battle flag in 2015 at the Statehouse in Columbia. File/Staff 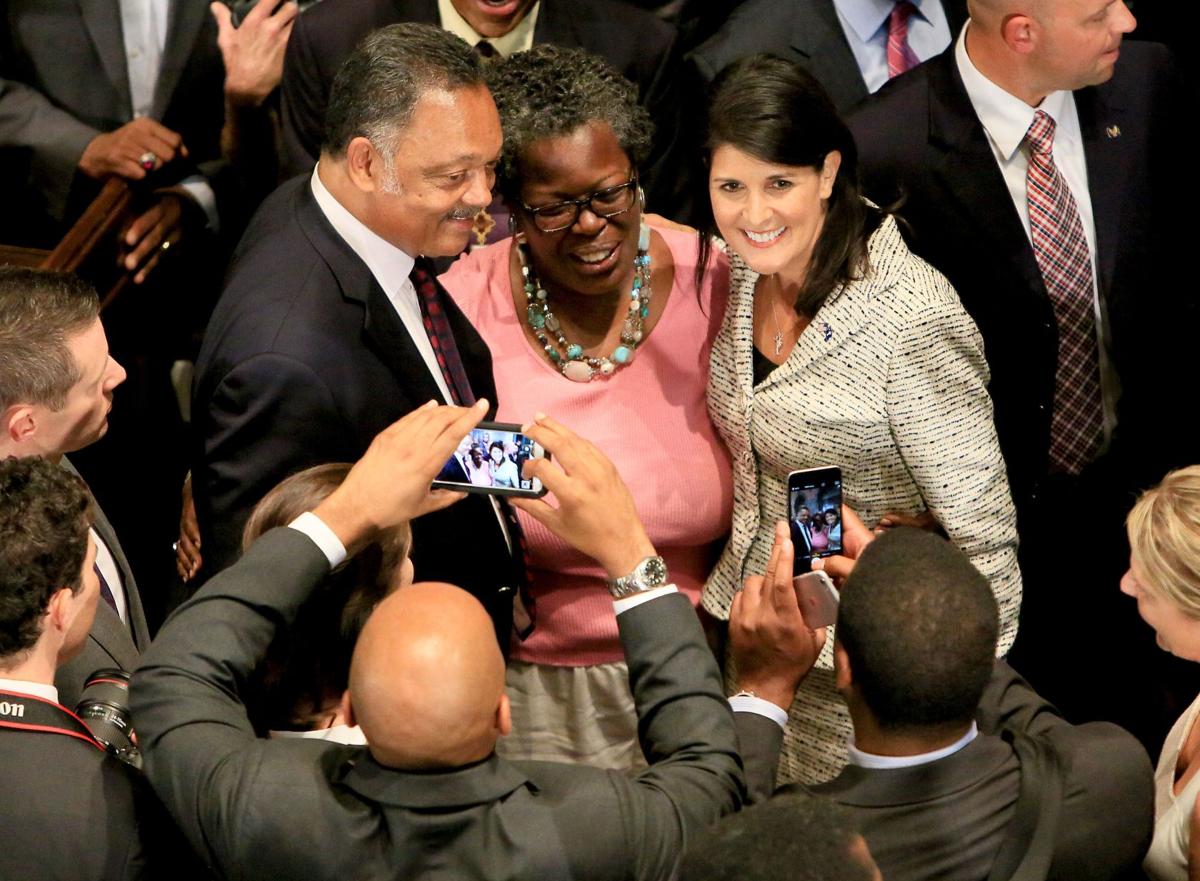 The Rev. Jesse Jackson, Rep. Gilda Cobb-Hunter and Gov. Nikki Haley pose for photos after Haley signed the bill to remove the Confederate battle flag from the Statehouse grounds July 9, 2015 in Columbia. File/Staff

Representatives and their families stand on the Statehouse steps to watch as members of the Highway Patrol Honor Guard take down the Confederate battle flag Friday, July 10, 2015 at the Statehouse in Columbia. File/Staff

A State Highway Patrol officer hands the Confederate battle flag to another officer after being lowered from the Statehouse grounds in Columbia, SC, on Friday, July 10, 2015. File/Staff

Construction crews dismantle the pole and fence that surrounded the Confederate battle flag that was removed from the Statehouse grounds Friday, July 10, 2015, in Columbia, S.C. File/Grace Beahm/Staff

Members of the Highway Patrol Honor Guard carry the Confederate battle flag after taking it down Friday, July 10, 2015 at the Statehouse in Columbia. File/Staff

Cheering and applause fill the rotunda as South Carolina Gov. Nikki Haley, surrounded by former South Carolina governors and state lawmakers, signs a bill into law removing the Confederate battle flag in 2015 at the Statehouse in Columbia. File/Staff

The Rev. Jesse Jackson, Rep. Gilda Cobb-Hunter and Gov. Nikki Haley pose for photos after Haley signed the bill to remove the Confederate battle flag from the Statehouse grounds July 9, 2015 in Columbia. File/Staff

Five years ago on July 10, 2015, South Carolina's governor and legislators showed the nation it was time to acknowledge the pain associated with the Confederate battle flag.

A white supremacist had killed nine Black people inside Charleston's Emanuel AME Church. The killer's goal was to start a race war.

His favorite banner was the Confederate battle flag; he burned the Stars and Stripes.

When officials ordered state and U.S. flags lowered to half-staff for nine days as a tribute to those gunned down, the battle flag on the Statehouse grounds did not budge.

Instead, it continued to fly high as the state and nation mourned.

It would take the death of a colleague — Emanuel reverend state Sen. Clementa Pinckney — along with newfound political will and swift legislative action to remove the rebel emblem from South Carolina's Statehouse grounds.

Five years later, those associated with the removal, including former Gov. Nikki Haley, say the killings made many realize that after a half-century on display, the flag had to go as a means of cleansing.

"A flag is a living, breathing symbol that represents the present day," Haley said this week in a written response to The Post and Courier.

"It never should have been on the Statehouse grounds, a place that represents all South Carolinians, in the first place," she added, and that the "goal was to end the decades-long debate and put it in its rightful place, a museum."

As the nation finds itself yet again in another summer of racial anguish, the moment South Carolina did move the flag marks — for some —the start of the nation's modern reckoning with Confederate monuments and symbols.

Still, however, there are those who say not much has changed.

"We were too quick to assume that we solved racism," said Adam Domby, a history professor at the College of Charleston who is also the author of the book, "False Cause: Fraud, Fabrication, and White Supremacy in Confederate Memory."

"The people who were excited about the removal of this flag didn't see it as the end, but as a starting point," Domby said.

In the days after the Emanuel murders, Haley had moved quickly, announcing five days after the shooting she would be holding an afternoon press conference. Word later leaked out that after more than 50 years on Statehouse display, she was planning to call for the removal of the battle flag from public view.

To each group she conveyed the same message.

"If you would stand with me, I would be forever grateful. And if you choose not to stand with me, I hold no ill will, and I respect you, and I will never let anybody know that you were in this room," she told them.

As the process moved quickly most of the Statehouse agreed the flag had to go, with many repeatedly pointing out that one of their own — Pinckney, was murdered at the church.

“If you cannot be moved by the suffering of the people of Charleston, then you don’t have a heart,” then-state Rep. Jenny Horne, R-Summerville, said to fellow House members. “I would ask you all to dig deep and find the courage to do the right thing.”

Not all lawmakers were swayed.

Thousands told Haley: Get rid of flag Over 10,000 emails to governor in Emanuel’s wake reveal emotions on both sides of debate

“This was way too big of an issue and it was not handled properly in the way it was fast-tracked,” said flag supporter Rep. Chris Corley, who at the time was a Republican from Graniteville. He was among a handful of those who didn't want to see change.

“We were sold out by the governor, by (state GOP Party Chairman) Matt Moore and by the speaker," he added.

In the end the Statehouse voted for the flag that was flying just yards away at the Confederate soldier's monument, to go away.

Twenty-two days after the murders at Emanuel, a crowd of nearly 10,000 people spilled into the streets surrounding the Statehouse grounds. Some had camped out the night before. When the state Highway Patrol honor guard began their march toward the flag, the crowd cheered.

In 34 seconds, the flag was gone. By the end of the day, the flagpole and the decorative fence surrounding it would be gone, too.

From her view on the Statehouse steps, Haley looked at the cheering crowd below chanting "USA! USA! USA!"

"As the flag came down, I felt a massive weight had been lifted," Haley said this week.

Looking back and ahead

Louis Smith, who founded the Community Resource Center of Summerville, was in the crowd to watch the flag come down that day.

"I thought it was the beginning of a new South," said Smith, 68.

Now, he views the moment as the easiest thing South Carolina could have done.

"We had our 'Kumbyah' moment," Smith said of the flag's removal. "But as far as concrete changes go and dealing with systemic racism, there hasn't been that much change."

State Sen. Marlon Kimpson, D-Charleston, was one of the sponsors of the bill that led to the flag's removal in 2015. Kimpson, whose district includes Emanuel AME Church, said the flag's exit showed the state was not tone-deaf to the pain of African Americans, but he also acknowledges that many are aware that much more needs done.

"What we have failed to do is galvanize substantive policy positions to further advance the social, economic and political agenda for marginalized communities," said Kimpson, who is Black.

He continued, "But the conversations about advancing a policy agenda have been furthered by us removing the flag. We are at a different starting place now than we were then."

Nikki Haley's remarks about the Confederate battle flag haven't changed. Her stage has.

For Brenda Murphy, the president of the South Carolina NAACP, the removal of the flag was a necessary gesture. The challenge, she said, is building on a moment and turning it into meaningful momentum.

She compared racism to a deep wound that has never fully healed.

"The sore was still there," she said, of the moment the flag came down. "But now we have to acknowledge the bandage doesn't work anymore."

Less than two weeks after the killing of George Floyd in Minneapolis in May, Charleston Mayor John Tecklenburg said he woke up and realized the Charleston's John C. Calhoun monument needed to come down.

The monument overlooked downtown Charleston's Marion Square for more than 100 years and was less than a block away from Emanuel.

In the years since the removal of the Confederate battle flag, the monument has been at the center of Charleston's reckoning over what belongs in the public sphere, and what is the best way to honor a complicated history.

Calhoun is a former 19th century politician who rose as high as the nation's vice president. But he was also a vocal proponent of slavery, calling it a "positive good" for the nation.

In 2018, an effort to add a plaque to the base of the monument stalled when City Council members could not agree whether the language was fair. Others pushed back because they did not think the plaque would do enough and that the entire statute had to go.

After Floyd's death, Tecklenburg recognized the time had come.

Just like Haley did, he reached out to the many voices of support he needed, including every member of City Council, asking them to support the controversial move; all agreed.

On June 17 — the five year anniversary of the shooting at Mother Emanuel — Tecklenburg stood in front of the 110-foot tall monument in Marion Square and announced it would not only be removed, but that the city would push forward with an agenda focused on "equity, inclusion and racial conciliation."

A week later, the Calhoun statue came down.

"So many people have accused us of trying to erase history, but that’s not we’re about," Tecklenburg said this week. "What this is is a true reflection of the intense heightening of awareness of racial disparity and injustice."

Both vestiges are gone from open display. The Confederate battle flag rests in a $1,400 viewing case that hangs between two offices in the state's Confederate Relic Room and Military Museum in Columbia.

Tecklenburg said the city of Charleston still searching to for the appropriate place to display the Calhoun monument.