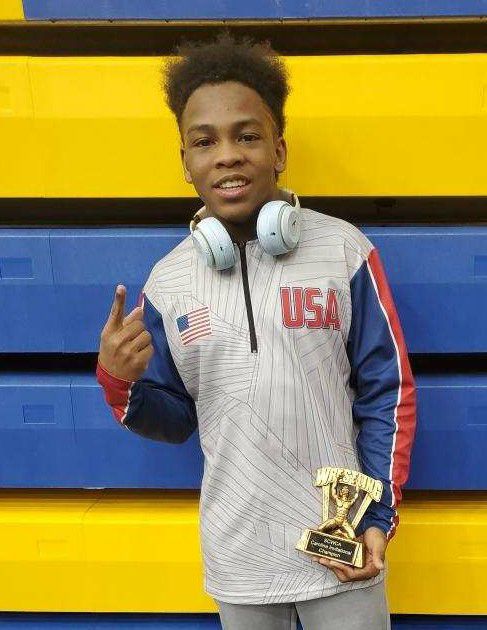 Jermaine Peace is the 102-pound state champion in the middle school division.

Jermaine Peace is the 102-pound state champion in the middle school division.

When the final shots were taken and all the smoke cleared, three area wrestlers emerged unscathed in the 47th annual Carolina Invitational wrestling tournament at Lexington High School on Jan. 25.

For their efforts, Jermaine Peace (Cane Bay), Ja’leyah Holmes (Goose Creek) and Jordan Evans (Stratford) landed on the top of the podium, earning the title of state champion.

The Carolina Invitational serves as a state championship tournament for middle school, junior varsity and girls divisions. Wrestlers had to advance through area and sectional qualifiers.

For Evans, who attends Westview Middle, it was a repeat performance. He also finished first last year.

The trio was dominant in the tournament, combining to win all 10 of their bouts.

Evans went 4-0, winning three matches by fall and another by major decision.

Peace had a 4-0 mark, winning three matches by fall and another by technical fall.

Holmes was 2-0, winning both matches by fall.

Berkeley County wrestlers generally fare well in the Carolina Invitational. In addition to the three this year and Evans in 2019, three won titles in 2018 and 2017, two won crowns in 2016 and four won gold in 2015.