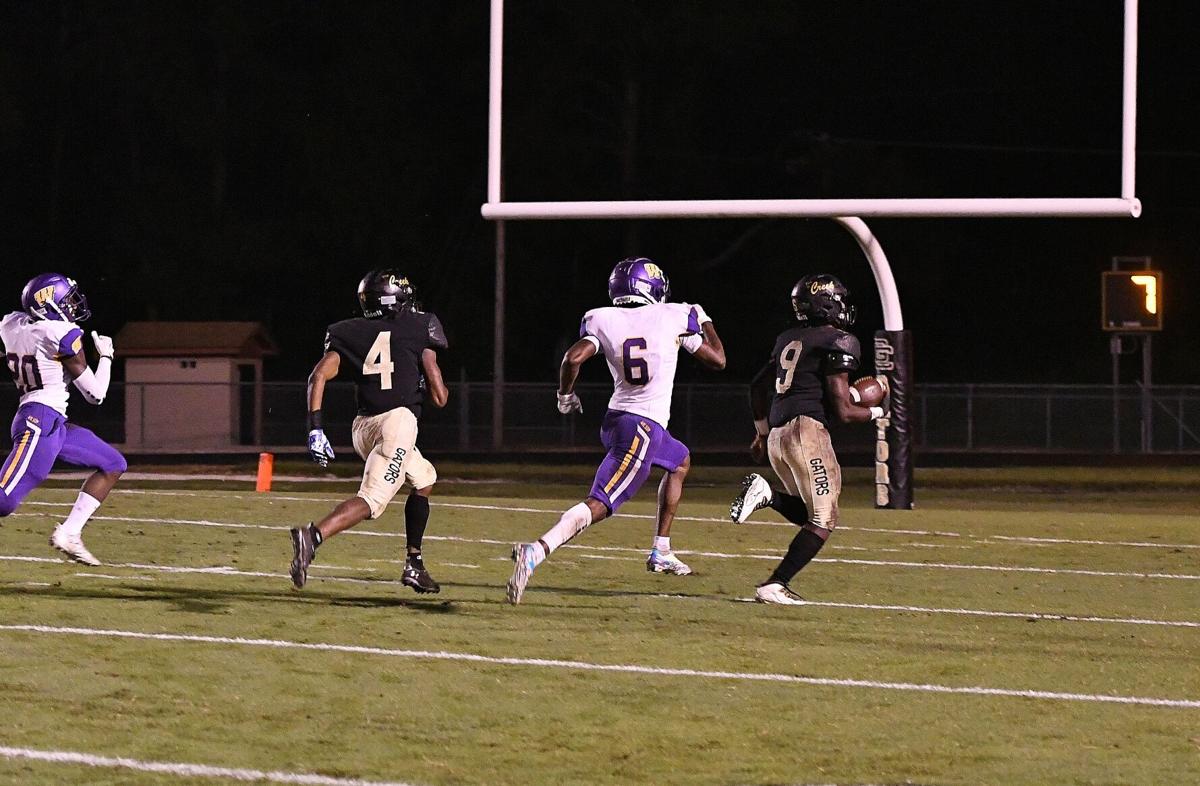 Goose Creek running back Demetri Simmons (9) scores on a 65-yard run in the first half against Wilson. He finished with six touchdowns in the Gators' 49-28 victory. 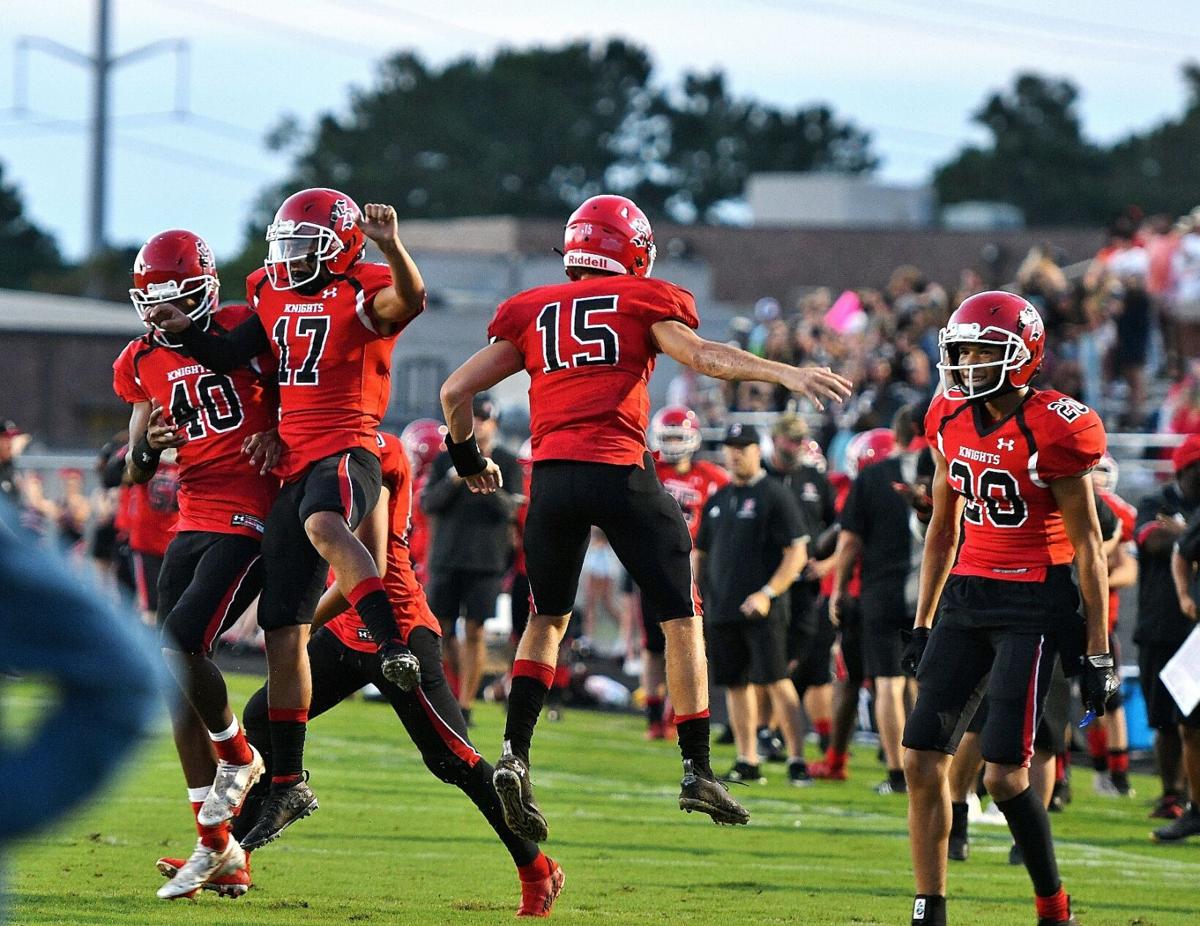 Stratford players celebrate a touchdown in the first quarter of a 15-14 victory over Hanahan on Friday. 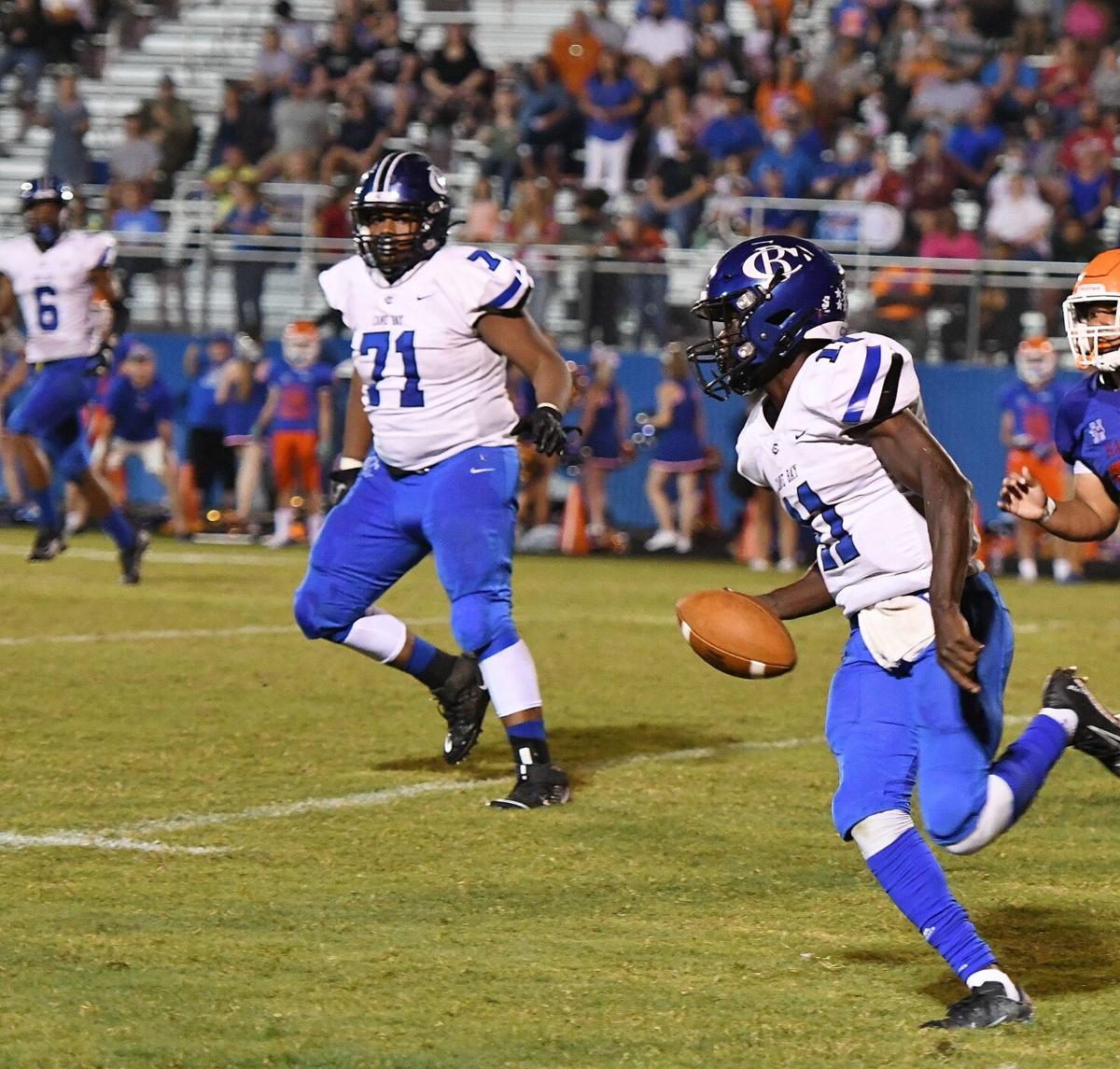 Goose Creek running back Demetri Simmons (9) scores on a 65-yard run in the first half against Wilson. He finished with six touchdowns in the Gators' 49-28 victory.

Stratford players celebrate a touchdown in the first quarter of a 15-14 victory over Hanahan on Friday.

The senior running back showed why on Sept. 10.

After scoring just one touchdown in a season-opening loss at Blythewood, the Gators have scored 83 points the last two weeks. Simmons topped 200 yards on the ground and scored twice in a 34-28 victory over West Ashley a week earlier.

“We’re going to go as he goes,” Winstead said of the reigning Region 7-AAAAA Player of the Year. “Six touchdowns, that’s impressive.”

“We didn’t have him in there for a little bit and had to bring him back,” Winstead said. “I thought we were going to go for a long drive there, but he did it in one play.”

Goose Creek’s other touchdown was a 50-yard strike from quarterback Drew Moore to Maurion Scott with just over a minute remaining in the first half. The big play gave the Gators a 29-point lead, but Wilson kept battling and cut the deficit to 42-28 in the fourth quarter.

The Gators (2-1) host rival Stratford on Sept. 17 in a rival clash moved up from Oct. 29 due to COVID-19 postponements with their next opponents.

It will be the region opener for both teams, and the Knights (1-0) have won three of the last four in the series. Stratford will be coming off a 15-14 victory over Hanahan in overtime.

Stratford quarterback Jalen Barry rolled out to the right and hit receiver Jayden Martino in the end zone to convert the winning 2-point conversion. Monte Quinn's 10-yard run on their first play in OT pulled the Knights within 14-13.

"I knew as soon as we scored, we were going to go for two," Stratford coach Dennie McDaniel said. "I knew stopping their two big backs in a 10-yard situation would be tough."

In regulation, running back Markell Holman scored on a short run for Stratford in the first quarter and Shaw reached paydirt with the equalizer in the second half for the Hawks.

Both defenses made key stops in the second half to force overtime.

"I think our kids showed a lot of heart and determination," McDaniel said. "We talk all the time about Knight pride and they showed a lot of fortitude. We've got a young team and this is a good win for them."

As for the upcoming matchup with the Gators, McDaniel said Goose Creek is playing well right now.

"They're a quality team and this is a rivalry game," McDaniel said. "Coach Winstead has them playing well.  We want to compete for a region championship and they're the two-time defending region champion. We've got to go over there and do our jobs."

While both Goose Creek and Stratford were at home on Friday, the Cane Bay Cobras rolled over to James Island for a non-region showdown. They returned home with an 18-8 victory against the Trojans.

The win upped Cane Bay's record to 2-1. Quarterback Jayvion Johnson scored on a 58-yard run in the second quarter and threw a 73-yard touchdown pass to Jaylen Boudreaux in the fourth quarter.

Cane Bay's other touchdown was on a 3-yard run by Xavier Brown.

Cane Bay coach Russell Zehr was impressed by the play of the Cobras' defensive unit. Cane Bay was coming off a 28-21 loss to Hanahan.

"I felt like the defense played very well," he said. "We gave up a late score off a fumble around our own 20. We wanted to be physical. We felt like Hanahan got the better of us, at least on the front. We got a lot pressure on the quarterback and a bunch of tackles for loss. We did a better job tackling overall than we have."

The Cobras host West Ashley on Friday in a series that has been competitive of late. Each of the last six matchups were decided by less than eight points, with the Wildcats holding a 4-2 edge.

"We hope we can hang in there with them," Zehr said. "It's a good opportunity to see if we're any good. They’re big, physical and athletic. They run it a lot of the time but throw it enough to keep you honest."

At Philip Simmons, the Iron Horses rallied from a 12-point deficit to win, 21-12, against Bishop England, improving to 4-0.

Dan Wojtech led the Iron Horses defense with 13 tackles and Skipper scooped up a fumble in the first quarter and returned it 90 yards for a score to jumpstart the comeback.