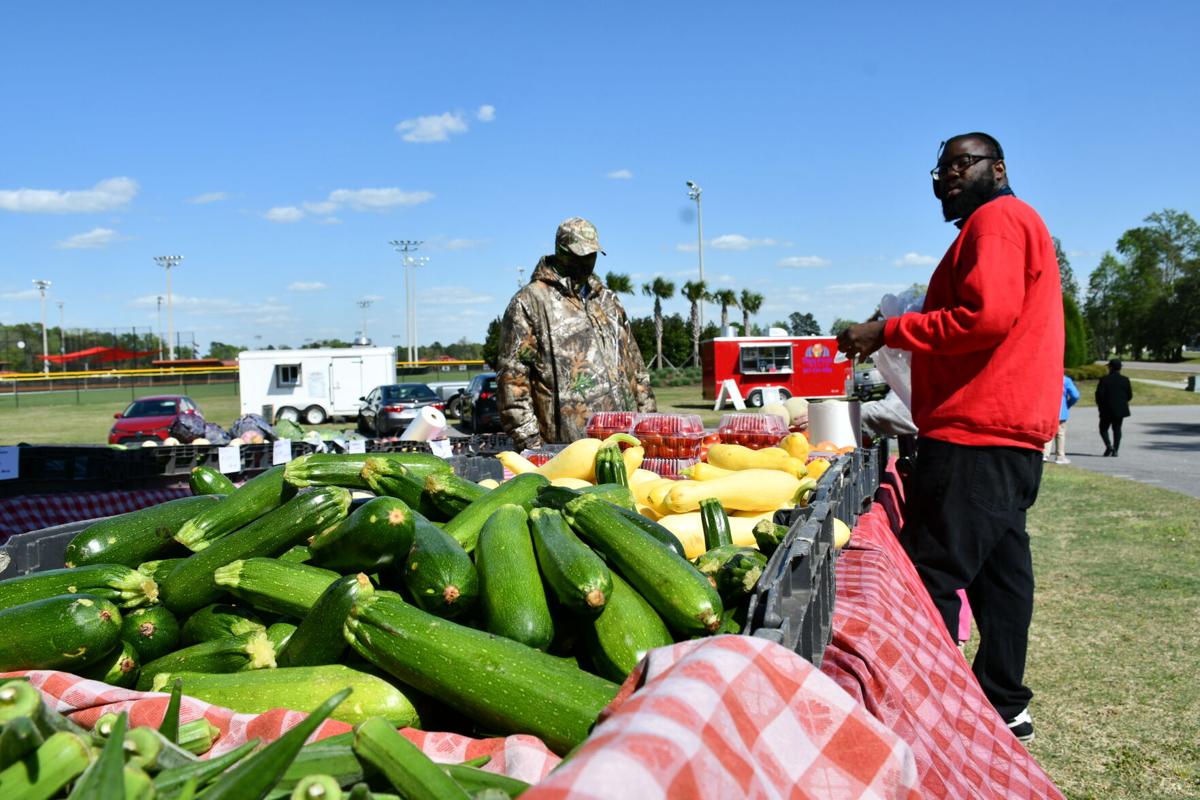 Vendors from Freeman Farm prepare produce for the start of the market. 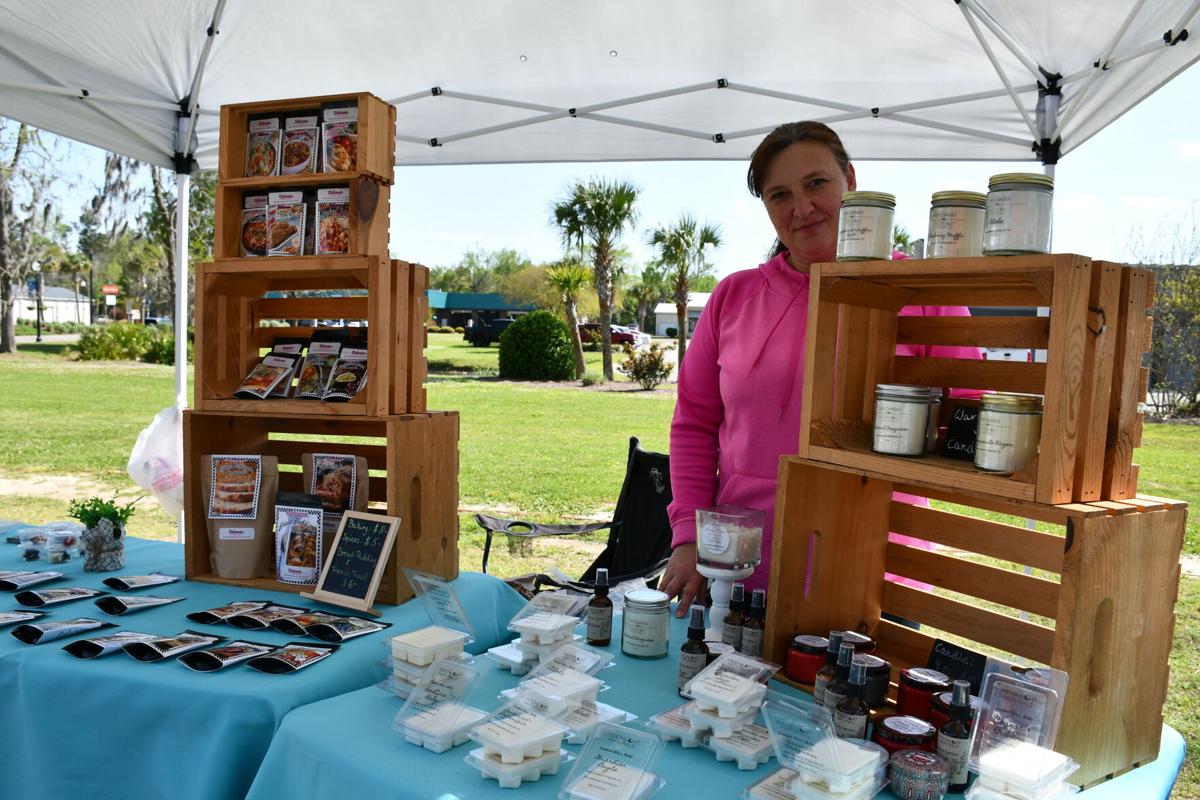 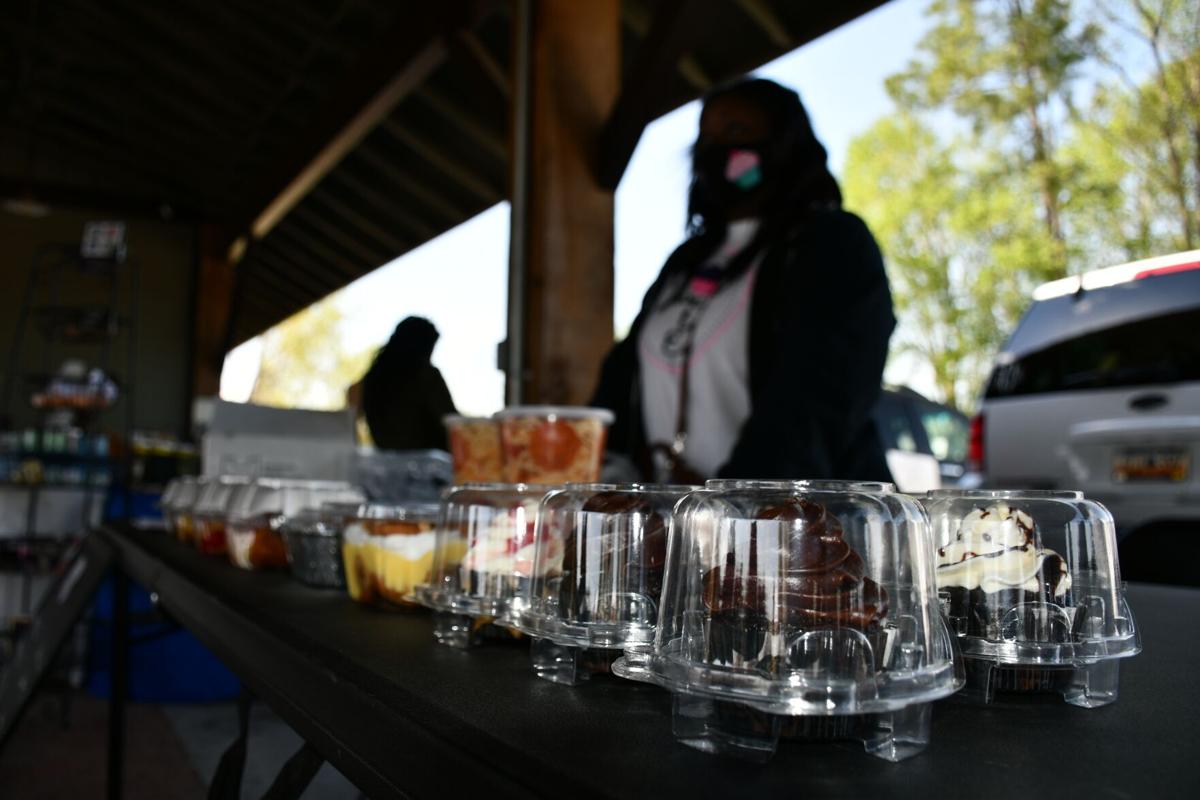 Jessica Hamilton, from Sweets to Eat, sells a variety of sweets and pastas. What started off as small has now grown to be a much larger business over the years, often selling out at farmers markets, Hamilton says.

Vendors from Freeman Farm prepare produce for the start of the market.

Jessica Hamilton, from Sweets to Eat, sells a variety of sweets and pastas. What started off as small has now grown to be a much larger business over the years, often selling out at farmers markets, Hamilton says.

The first farmers market of the year kicked off at the Regional Recreation Complex in Moncks Corner on April 1. From 3 p.m.-6 p.m. vendors filled the market pavilion, located at 418 East Main Street.

Casey Tharp, market manager, says that she expects this year to be much bigger than last year. With significantly more vendors selling at the market, last year the market averaged 5 to 8 vendors and this year there is about 26, Tharp is optimistic about the season ahead.

“We just ask that you keep your distance, masks are not required but they are recommended and we have sanitizers out,” Tharp said.

The farmers markets will continue to be hosted every Thursday from 3 p.m.-6 p.m at the same location until the last Thursday in October.

Of the vendors attending the market was Sandie Magoon of Sandie’s Custom Crafts. Magoon’s store features unique home decor and wreaths that accentuate vibrant spring colors. After moving from New England, where her business originated, Magoon found herself furloughed from her job in South Carolina last March due to the pandemic. That's when, Magoon says, she began creating crafts once again.

“My husband said why don't you go upstairs to your studio and do some crafts. My niece has been helping me out so it's been wonderful...there's no two things that are alike. So they are just, I don't know, one of a kind,” Magoon said.

The market brought together vendors selling anything from soaps to tacos to produce. Rose Freeman, from Freeman's Produce, brought a variety of their own farm's veggies to sell. Although the family farm has been in business for over 50 years, yesterday was Freeman's first time selling at the Moncks Corner farmers market.

The farm sells their produce at a stand off Betsy Kerrison parkway, but the farm itself, located on River Road, is where the magic happens.

“It's [the farm is] passed down from the father to the sons. My husband's father started it,” Freeman said.

Jessica Hamilton, from Sweets to Eat, says their business has been around for about two years now. Hamilton and her crew cater for holiday dinners and birthdays throughout the surrounding community.

Despite being a fairly new business, Hamilton says that the stand sold out several times when they sold at the farmers market. Since then, business has only continued to grow for them.

“Just by the grace of God, we just went out and said let's just try something different. We started off something small and now we are just moving,” Hamilton said. “We literally sold out the first couple of times we came here last year. We are about to sell out again.”

Some of the most popular picks from their stand, Hamilton says, is the banana pudding, strawberry shortcake, and chewies, which are brownies that are just a little bit more sweet.

Magoon, like other vendors, is a bit hesitant about the start of the season amidst the still high numbers of confirmed COVID-19 cases.

“I’m a little anxious but it's looking like it's going to be good,” Magoon said.

Still, after a year of limited opportunities for vendors to sell their products, the beginning of a long season for selling is a much desired step towards normalcy for many businesses.