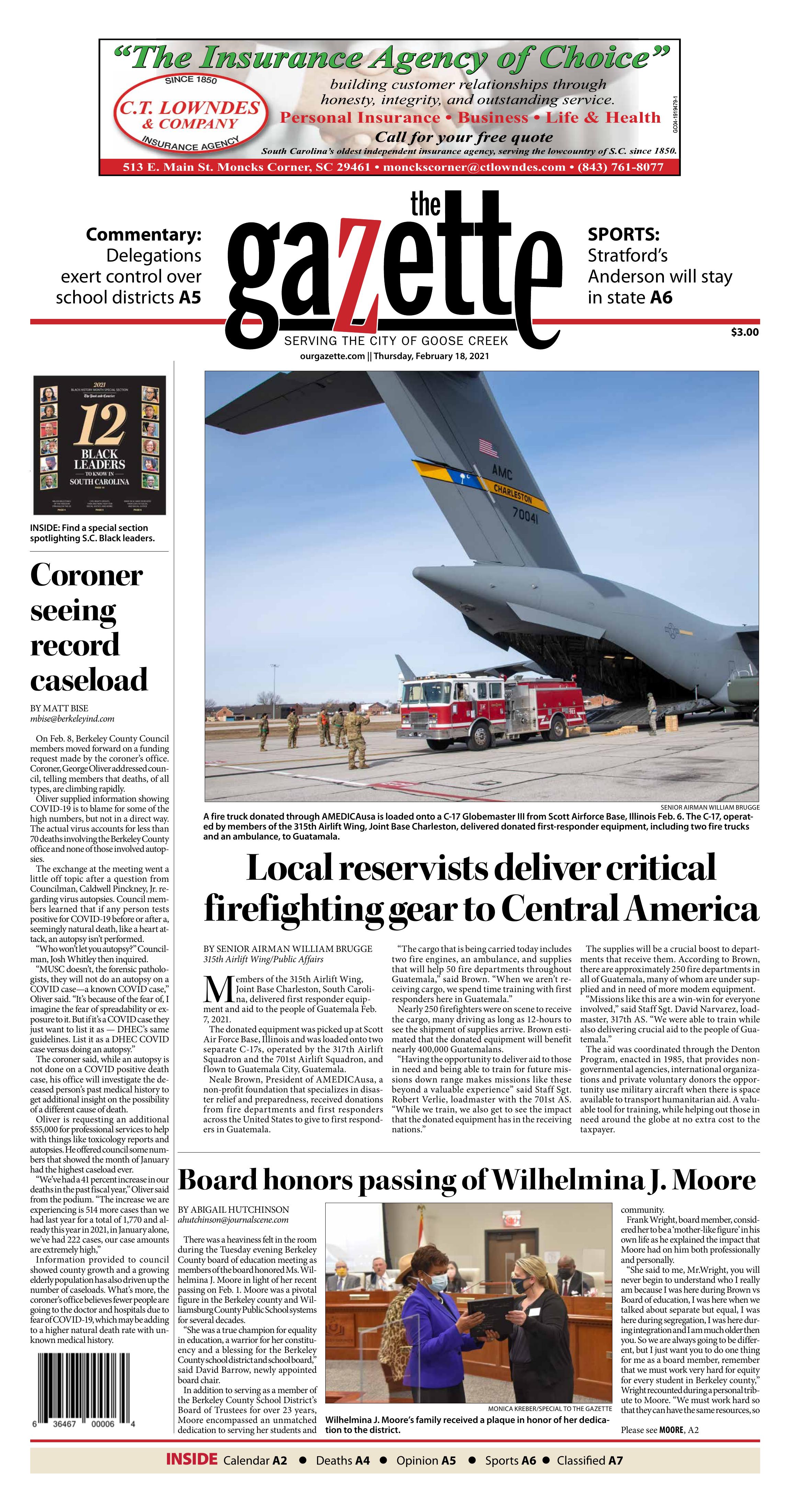 A fire truck donated through AMEDICAusa is loaded onto a C-17 Globemaster III from Scott Airforce Base, Illinois Feb. 6. The C-17, operated by members of the 315th Airlift Wing, Joint Base Charleston, delivered donated first-responder equipment, including two fire trucks and an ambulance, to Guatamala.

A fire truck donated through AMEDICAusa is off-loaded from a C-17 Globemaster III Feb. 7, 2021 in Guatamala City, Guatamala.. The C-17, operated by members of the 315th Airlift Wing, Joint Base Charleston, delivered donated first responder equipment including two fire trucks and an ambulance to Guatamala.

Members of the 315th Airlift Wing, Joint Base Charleston, South Carolina, delivered first responder equipment and aid to the people of Guatemala Feb. 7, 2021.

The donated equipment was picked up at Scott Air Force Base, Illinois and was loaded onto two separate C-17s, operated by the 317th Airlift Squadron and the 701st Airlift Squadron, and flown to Guatemala City, Guatemala.

Neale Brown, President of AMEDICAusa, a non-profit foundation that specializes in disaster relief and preparedness, received donations from fire departments and first responders across the United States to give to first responders in Guatemala.

“The cargo that is being carried today includes two fire engines, an ambulance, and supplies that will help 50 fire departments throughout Guatemala,” said Brown. “When we aren’t receiving cargo, we spend time training with first responders here in Guatemala.”

Nearly 250 firefighters were on scene to receive the cargo, many driving as long as 12-hours to see the shipment of supplies arrive. Brown estimated that the donated equipment will benefit nearly 400,000 Guatemalans.

“Having the opportunity to deliver aid to those in need and being able to train for future missions down range makes missions like these beyond a valuable experience” said Staff Sgt. Robert Verlie, loadmaster with the 701st AS. “While we train, we also get to see the impact that the donated equipment has in the receiving nations.”

The supplies will be a crucial boost to departments that receive them. According to Brown, there are approximately 250 fire departments in all of Guatemala, many of whom are under supplied and in need of more modem equipment.

“Missions like this are a win-win for everyone involved,” said Staff Sgt. David Narvarez, loadmaster, 317th AS. “We were able to train while also delivering crucial aid to the people of Guatemala.”

The aid was coordinated through the Denton Program, enacted in 1985, that provides non-governmental agencies, international organizations and private voluntary donors the opportunity use military aircraft when there is space available to transport humanitarian aid. A valuable tool for training, while helping out those in need around the globe at no extra cost to the taxpayer.

Wilhelmina J. Moore’s family received a plaque in honor of her dedication to the district.

There was a heaviness felt in the room during the Tuesday evening Berkeley County board of education meeting as members of the board honored Ms. Wilhelmina J. Moore in light of her recent passing on Feb. 1. Moore was a pivotal figure in the Berkeley county and Williamsburg County Public School systems for several decades.

“She was a true champion for equality in education, a warrior for her constituency and a blessing for the Berkeley County school district and school board,” said David Barrow, newly appointed board chair.

In addition to serving as a member of the Berkeley County School District’s Board of Trustees for over 23 years, Moore encompassed an unmatched dedication to serving her students and community.

Frank Wright, board member, considered her to be a ‘mother-like figure’ in his own life as he explained the impact that Moore had on him both professionally and personally.

“She said to me, Mr.Wright, you will never begin to understand who I really am because I was here during Brown vs Board of education, I was here when we talked about separate but equal, I was here during segregation, I was here during integration and I am much older then you. So we are always going to be different, but I just want you to do one thing for me as a board member, remember that we must work very hard for equity for every student in Berkeley county,” Wright recounted during a personal tribute to Moore. “We must work hard so that they can have the same resources, so that they can be effective in the twenty-first century. And I’ve never forgotten that. And all my years on the board, this is what I’m about. And I think Ms. Moore for making that very clear to me.”

In response, Kelly Marone, board representative for District seven, the same district which Moore faithfully represented for so many years, presented a resolution to honor Moore’s ‘dedication and lasting services and leadership to Berkeley County School district.’

“Standing here in district seven seat is such an honor. I got involved in the school district and came here passionately and I researched so much, and everything came back to the values of Ms. Wilhelmina J Moore. So I want to think her for being an inspiration,” said Marone.

Some of Moore’s family members were present at the meeting including Renia Pringle and Dr. Yvonne Barnes, who received a plaque honoring her impactful service. 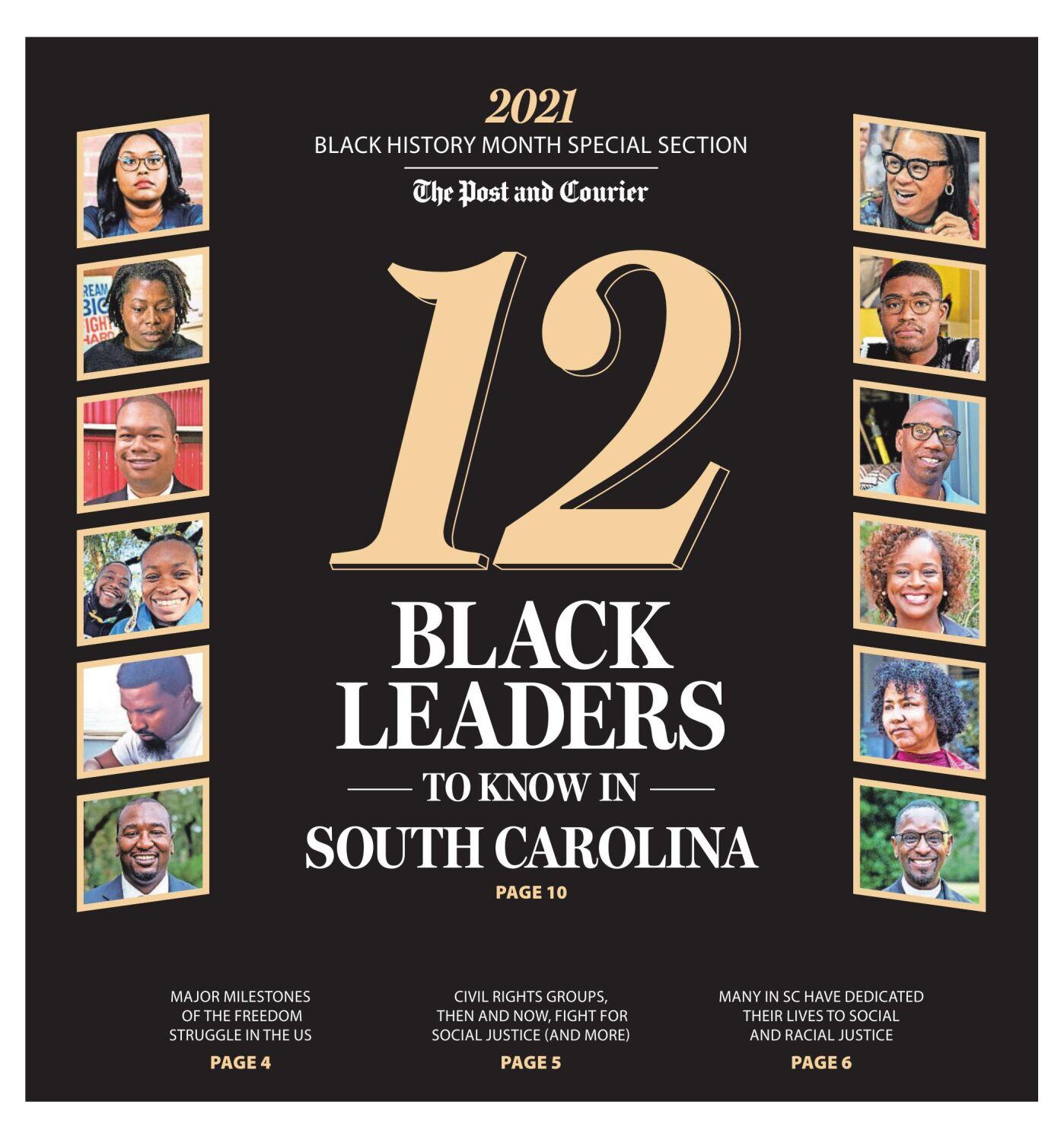 On Feb. 8, Berkeley County Council members moved forward on a funding request made by the coroner’s office. Coroner, George Oliver addressed council, telling members that deaths, of all types, are climbing rapidly.

Oliver supplied information showing COVID-19 is to blame for some of the high numbers, but not in a direct way. The actual virus accounts for less than 70 deaths involving the Berkeley County office and none of those involved autopsies.

The exchange at the meeting went a little off topic after a question from Councilman, Caldwell Pinckney, Jr. regarding virus autopsies. Council members learned that if any person tests positive for COVID-19 before or after a, seemingly natural death, like a heart attack, an autopsy isn’t performed.

“Who won’t let you autopsy?” Councilman, Josh Whitley then inquired.

“MUSC doesn’t, the forensic pathologists, they will not do an autopsy on a COVID case—a known COVID case,” Oliver said. “It’s because of the fear of, I imagine the fear of spreadability or exposure to it. But if it’s a COVID case they just want to list it as — DHEC’s same guidelines. List it as a DHEC COVID case versus doing an autopsy.”

The coroner said, while an autopsy is not done on a COVID positive death case, his office will investigate the deceased person’s past medical history to get additional insight on the possibility of a different cause of death.

Oliver is requesting an additional $55,000 for professional services to help with things like toxicology reports and autopsies. He offered council some numbers that showed the month of January had the highest caseload ever.

“We’ve had a 41 percent increase in our deaths in the past fiscal year,” Oliver said from the podium. “The increase we are experiencing is 514 more cases than we had last year for a total of 1,770 and already this year in 2021, in January alone, we’ve had 222 cases, our case amounts are extremely high,”

Information provided to council showed county growth and a growing elderly population has also driven up the number of caseloads. What’s more, the coroner’s office believes fewer people are going to the doctor and hospitals due to fear of COVID-19, which may be adding to a higher natural death rate with unknown medical history.

“The naturals have gone up, the motor vehicle accidents have doubled our suicides are up and our overdoses is off the charts,” Oliver said. “More people are at home they’re jobless there’s a lot of factors going on and they turn to prescription pills or other illicit drugs and we’re seeing a lot of overdoses attributed to that.”