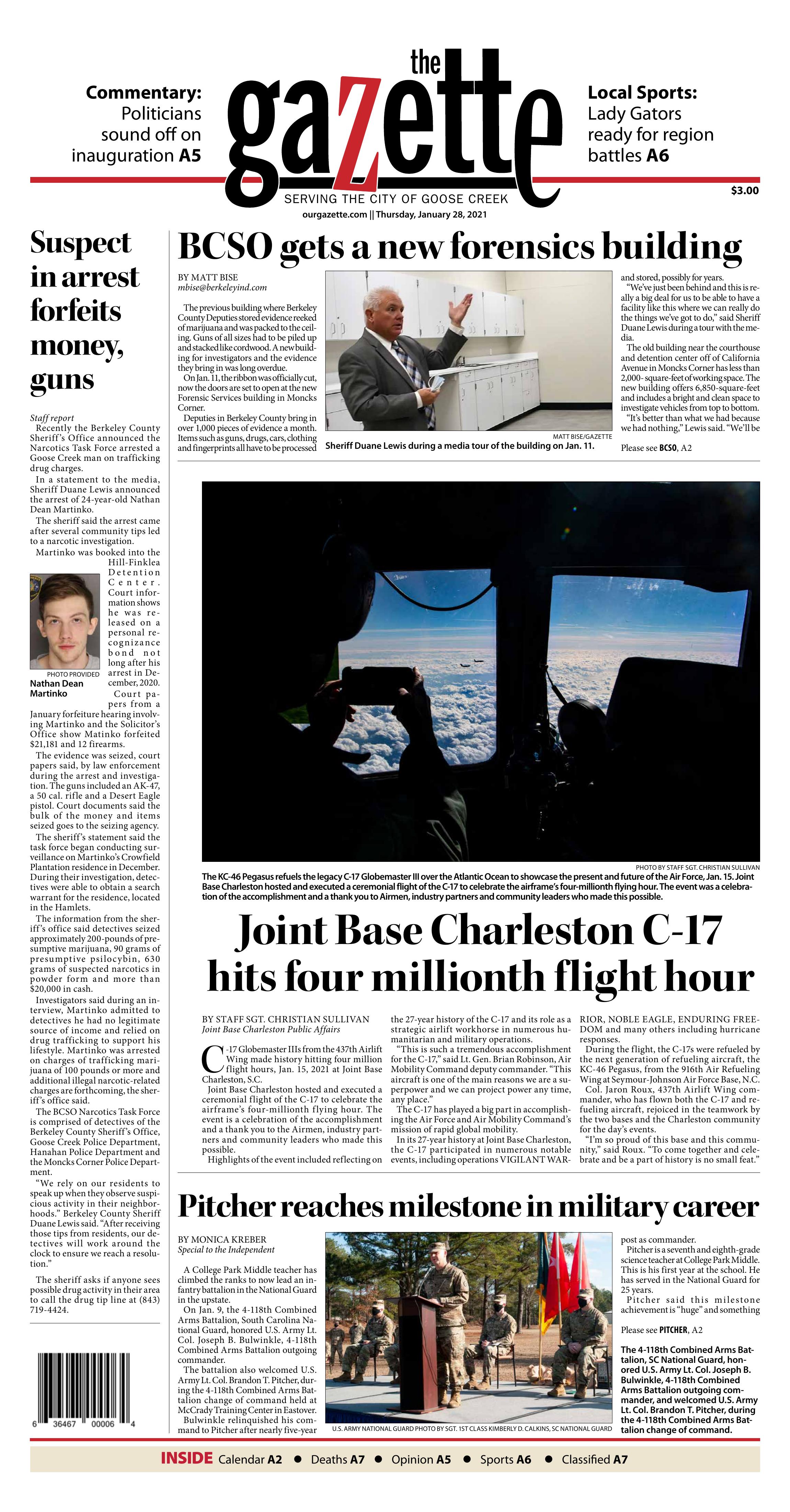 The KC-46 Pegasus refuels the legacy C-17 Globemaster III over the Atlantic Ocean to showcase the present and future of the Air Force, Jan. 15. Joint Base Charleston hosted and executed a ceremonial flight of the C-17 to celebrate the airframe’s four-millionth flying hour. The event was a celebration of the accomplishment and a thank you to Airmen, industry partners and community leaders who made this possible.

A pilot from the 317th Airlift Squadron adjusts controls in a C-17 Globemaster III over the Atlantic Ocean, Jan. 15. Joint Base Charleston hosted and executed a ceremonial flight of the C-17 to celebrate the airframe’s four-millionth flying hour. The event was a celebration of the accomplishment and a thank you to Airmen, industry partners and community leaders who made this possible.{span} {/span}

The KC-46 Pegasus refuels the legacy C-17 Globemaster III over the Atlantic Ocean to showcase the present and future of the Air Force, Jan. 15. Joint Base Charleston hosted and executed a ceremonial flight of the C-17 to celebrate the airframe’s four-millionth flying hour. The event was a celebration of the accomplishment and a thank you to Airmen, industry partners and community leaders who made this possible.

An Airman from the 791st Airlift Squadron adjusts his harness on a C-17 Globemaster III above North Field North on Jan. 15. Joint Base Charleston hosted and executed a ceremonial flight of the C-17 to celebrate the airframe’s four-millionth flying hour. The event was a celebration of the accomplishment and a thank you to Airmen, industry partners and community leaders who made this possible.

Joint Base Charleston hosted and executed a ceremonial flight of the C-17 to celebrate the airframe’s four-millionth flying hour. The event is a celebration of the accomplishment and a thank you to the Airmen, industry partners and community leaders who made this possible.

Highlights of the event included reflecting on the 27-year history of the C-17 and its role as a strategic airlift workhorse in numerous humanitarian and military operations.

“This is such a tremendous accomplishment for the C-17,” said Lt. Gen. Brian Robinson, Air Mobility Command deputy commander. “This aircraft is one of the main reasons we are a superpower and we can project power any time, any place.”

The C-17 has played a big part in accomplishing the Air Force and Air Mobility Command’s mission of rapid global mobility.

In its 27-year history at Joint Base Charleston, the C-17 participated in numerous notable events, including operations VIGILANT WARRIOR, NOBLE EAGLE, ENDURING FREEDOM and many others including hurricane responses.

During the flight, the C-17s were refueled by the next generation of refueling aircraft, the KC-46 Pegasus, from the 916th Air Refueling Wing at Seymour-Johnson Air Force Base, N.C.

Col. Jaron Roux, 437th Airlift Wing commander, who has flown both the C-17 and refueling aircraft, rejoiced in the teamwork by the two bases and the Charleston community for the day’s events.

“I’m so proud of this base and this community,” said Roux. “To come together and celebrate and be a part of history is no small feat.”

A College Park Middle teacher has climbed the ranks to now lead an infantry battalion in the National Guard in the upstate.

Bulwinkle relinquished his command to Pitcher after nearly five-year post as commander.

Pitcher is a seventh and eighth-grade science teacher at College Park Middle. This is his first year at the school. He has served in the National Guard for 25 years.

Pitcher said this milestone achievement is “huge” and something he has been working toward during his career with the National Guard.

The Change of Command went into effect this month.

According to a write p of his bio, Pitcher is a graduate of the College of Charleston with a Bachelor of Science in Biology and holds a Master’s Degree in Educational Leadership from the Citadel College of Graduate Studies. Pitcher has served as a teacher and school administrator for more than 29 years in the Berkeley County School District and Dorchester School District Two; he retired as Oakbrook Middle’s principal last year and desired to head back to the classroom, and came to College Park Middle.

Pitcher lives in Summerville with his wife, Susan, and their daughters, Brettan, and Graycen, and son, Colton.

View photos from the change of command ceremony.

In a statement to the media, Sheriff Duane Lewis announced the arrest of 24-year-old Nathan Dean Martinko.

The sheriff said the arrest came after several community tips led to a narcotic investigation.

Martinko was booked into the Hill-Finklea Detention Center. Court information shows he was released on a personal recognizance bond not long after his arrest in December, 2020.

The evidence was seized, court papers said, by law enforcement during the arrest and investigation. The guns included an AK-47, a 50 cal. rifle and a Desert Eagle pistol. Court documents said the bulk of the money and items seized goes to the seizing agency.

The sheriff’s statement said the task force began conducting surveillance on Martinko’s Crowfield Plantation residence in December. During their investigation, detectives were able to obtain a search warrant for the residence, located in the Hamlets.

The information from the sheriff’s office said detectives seized approximately 200-pounds of presumptive marijuana, 90 grams of presumptive psilocybin, 630 grams of suspected narcotics in powder form and more than $20,000 in cash.

Investigators said during an interview, Martinko admitted to detectives he had no legitimate source of income and relied on drug trafficking to support his lifestyle. Martinko was arrested on charges of trafficking marijuana of 100 pounds or more and additional illegal narcotic-related charges are forthcoming, the sheriff’s office said.

“We rely on our residents to speak up when they observe suspicious activity in their neighborhoods.” Berkeley County Sheriff Duane Lewis said. “After receiving those tips from residents, our detectives will work around the clock to ensure we reach a resolution.”