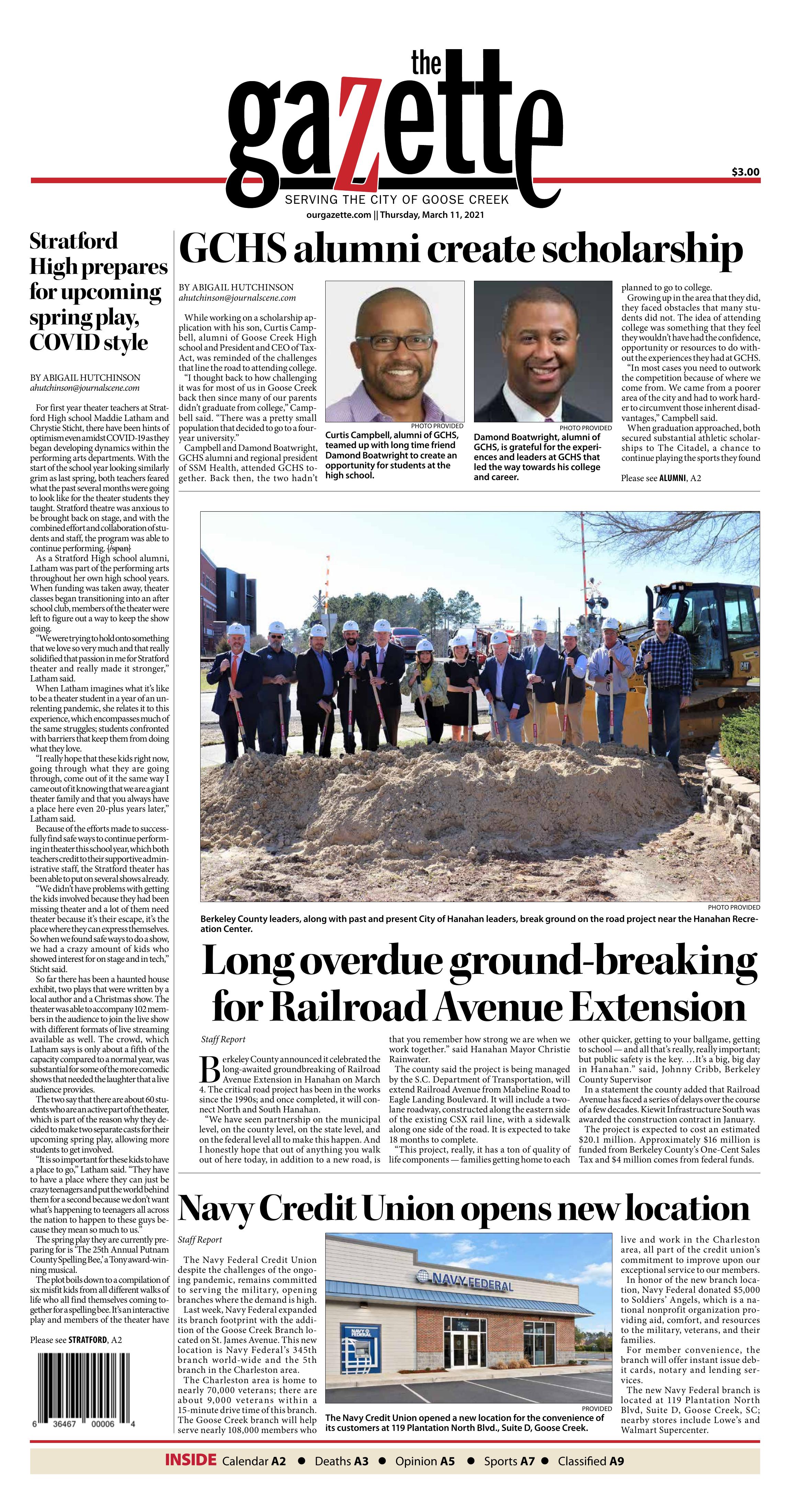 Damond Boatwright, alumni of GCHS, is grateful for the experiences and leaders at GCHS that led the way towards his college and career. 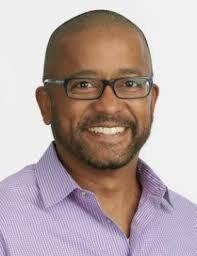 Curtis Campbell, alumni of GCHS, teamed up with long time friend Damond Boatwright to create an opportunity for students at the high school.

While working on a scholarship application with his son, Curtis Campbell, alumni of Goose Creek High school and President and CEO of TaxAct, was reminded of the challenges that line the road to attending college.

“I thought back to how challenging it was for most of us in Goose Creek back then since many of our parents didn’t graduate from college,” Campbell said. “There was a pretty small population that decided to go to a four-year university.”

Campbell and Damond Boatwright, GCHS alumni and regional president of SSM Health, attended GCHS together. Back then, the two hadn’t planned to go to college.

Growing up in the area that they did, they faced obstacles that many students did not. The idea of attending college was something that they feel they wouldn’t have had the confidence, opportunity or resources to do without the experiences they had at GCHS.

“In most cases you need to outwork the competition because of where we come from. We came from a poorer area of the city and had to work harder to circumvent those inherent disadvantages,” Campbell said.

When graduation approached, both secured substantial athletic scholarships to The Citadel, a chance to continue playing the sports they found themselves excelling at throughout high school. Boatwright accepted a scholarship for football and Campbell accepted one for wrestling, without which, he says likely would have never attended college. As for Boatwright, the opportunities that football opened up for his future changed everything.

Throughout their journey, both claim that it has been the influence of their coaches, guidance counselors, mentors and leaders that have led them to their current careers.

Today, the two have come together to create a scholarship named the Class of 1990 Black and Gold Scholarship as a way of giving back to the place that impacted their lives so deeply and to supply an opportunity to a Gator in hopes it aids their ability to achieve their dreams.

The Class of 1990 Black and Gold scholarship will be awarded every year to one graduating senior that plans to pursue a four-year college degree with a major in science, business administration, healthcare or engineering. Both alums have made an initial $20,000 investment to the scholarship fund. The recipient will receive a $5,000 scholarship going towards the furthering of their education.

“The generous donation of Mr. Boatwright and Mr. Campbell ensures that our legacy will continue to grow here in the Goose Creek community and beyond. I am so thankful for their partnership in our pursuit of greatness,” said Shameka Washington, principal Goose Creek High School.

As of March 1, the Class of 1990 Black and Gold Scholarship is available for seniors at GCHS to apply for. The deadline to apply is April 15, 2021. The application can be found on the GCHS website.

Campbell is hopeful that this chance they are giving to a high school student will lead to many opportunities down the line and both feel confident that the Gator graduate who receives the award will take advantage of it to the fullest.

“Now with the two of us, two black kids from Goose Creek, in the same graduating class in high school and college and having been lucky enough to become C-suite executives at major companies, it makes our hearts beat with pride to be able to give back to the high school that gave so much to us,” Campbell said.

Berkeley County leaders, along with past and present City of Hanahan leaders, break ground on the road project near the Hanahan Recreation Center.

Berkeley County announced it celebrated the long-awaited groundbreaking of Railroad Avenue Extension in Hanahan on March 4. The critical road project has been in the works since the 1990s; and once completed, it will connect North and South Hanahan.

“We have seen partnership on the municipal level, on the county level, on the state level, and on the federal level all to make this happen. And I honestly hope that out of anything you walk out of here today, in addition to a new road, is that you remember how strong we are when we work together.” said Hanahan Mayor Christie Rainwater.

The county said the project is being managed by the S.C. Department of Transportation, will extend Railroad Avenue from Mabeline Road to Eagle Landing Boulevard. It will include a two-lane roadway, constructed along the eastern side of the existing CSX rail line, with a sidewalk along one side of the road. It is expected to take 18 months to complete.

“This project, really, it has a ton of quality of life components — families getting home to each other quicker, getting to your ballgame, getting to school — and all that’s really, really important; but public safety is the key. …It’s a big, big day in Hanahan.” said, Johnny Cribb, Berkeley County Supervisor

In a statement the county added that Railroad Avenue has faced a series of delays over the course of a few decades. Kiewit Infrastructure South was awarded the construction contract in January.

The project is expected to cost an estimated $20.1 million. Approximately $16 million is funded from Berkeley County’s One-Cent Sales Tax and $4 million comes from federal funds.

The Navy Credit Union opened a new location for the convenience of its customers at 119 Plantation North Blvd., Suite D, Goose Creek.

he Navy Federal Credit Union despite the challenges of the ongoing pandemic, remains committed to serving the military, opening branches where the demand is high.

Last week, Navy Federal expanded its branch footprint with the addition of the Goose Creek Branch located on St. James Avenue. This new location is Navy Federal’s 345th branch world-wide and the 5th branch in the Charleston area.

The Charleston area is home to nearly 70,000 veterans; there are about 9,000 veterans within a 15-minute drive time of this branch. The Goose Creek branch will help serve nearly 108,000 members who live and work in the Charleston area, all part of the credit union’s commitment to improve upon our exceptional service to our members.

In honor of the new branch location, Navy Federal donated $5,000 to Soldiers’ Angels, which is a national nonprofit organization providing aid, comfort, and resources to the military, veterans, and their families.

For first year theater teachers at Stratford High school Maddie Latham and Chrystie Sticht, there have been hints of optimism even amidst COVID-19 as they began developing dynamics within the performing arts departments. With the start of the school year looking similarly grim as last spring, both teachers feared what the past several months were going to look like for the theater students they taught. Stratford theatre was anxious to be brought back on stage, and with the combined effort and collaboration of students and staff, the program was able to continue performing. {/span}

As a Stratford High school alumni, Sticht was part of the performing arts throughout her own high school years. When funding was taken away, theater classes began transitioning into an after school club, members of the theater were left to figure out a way to keep the show going.

“We were trying to hold onto something that we love so very much and that really solidified that passion in me for Stratford theater and really made it stronger,” Sticht said.

When Sticht imagines what it’s like to be a theater student in a year of an unrelenting pandemic, she relates it to this experience, which encompasses much of the same struggles; students confronted with barriers that keep them from doing what they love.

“I really hope that these kids right now, going through what they are going through, come out of it the same way I came out of it knowing that we are a giant theater family and that you always have a place here even 20-plus years later,” Sticht said.

Because of the efforts made to successfully find safe ways to continue performing in theater this school year, which both teachers credit to their supportive administrative staff, the Stratford theater has been able to put on several shows already.

“We didn’t have problems with getting the kids involved because they had been missing theater and a lot of them need theater because it’s their escape, it’s the place where they can express themselves. So when we found safe ways to do a show, we had a crazy amount of kids who showed interest for on stage and in tech,” Latham said.

So far there has been a haunted house exhibit, two plays that were written by a local author and a Christmas show. The theater was able to accompany 102 members in the audience to join the live show with different formats of live streaming available as well. The crowd, which Latham says is only about a fifth of the capacity compared to a normal year, was substantial for some of the more comedic shows that needed the laughter that a live audience provides.

The two say that there are about 60 students who are an active part of the theater, which is part of the reason why they decided to make two separate casts for their upcoming spring play, allowing more students to get involved.

“It is so important for these kids to have a place to go,” Sticht said. “They have to have a place where they can just be crazy teenagers and put the world behind them for a second because we don’t want what’s happening to teenagers all across the nation to happen to these guys because they mean so much to us.”

The spring play they are currently preparing for is ‘The 25th Annual Putnam County Spelling Bee,’ a Tony award-winning musical.

The plot boils down to a compilation of six misfit kids from all different walks of life who all find themselves coming together for a spelling bee. It’s an interactive play and members of the theater have already found ways for audience members to safely join the stage for portions of the show. While the show doesn’t involve intricate costumes or props, what is most notable, Sticht says, is the deep characterization of each role and the songs performed throughout it.

“When they started singing the music they realized how hard the harmonies are. What’s amazing is they will come in to practice and our dressing rooms are filled with the sound of singing, it is truly one of the hardest shows to do musically,” Sticht said.

Despite its comedic nature, Latham noted that there are deeper truths that come to surface throughout the play.

“You think it’s a cute comedy and then there are these moments in the play where you’re crying,” Latham said.

Both teachers emphasized that the overall message of the play is pertinent at this point in time. The play hits on subjects of acceptance, diversity and understanding.

“It’s about learning to live with the idea that it is okay to lose. It’s okay not to win. And to be happy for them,” Sticht said.

Tickets are $10 each and will be available for purchase two months before the show on EventBrite, as seats are limited. The dates of the show are May 28-29 and June 4-5. There will be a total of eight shows.