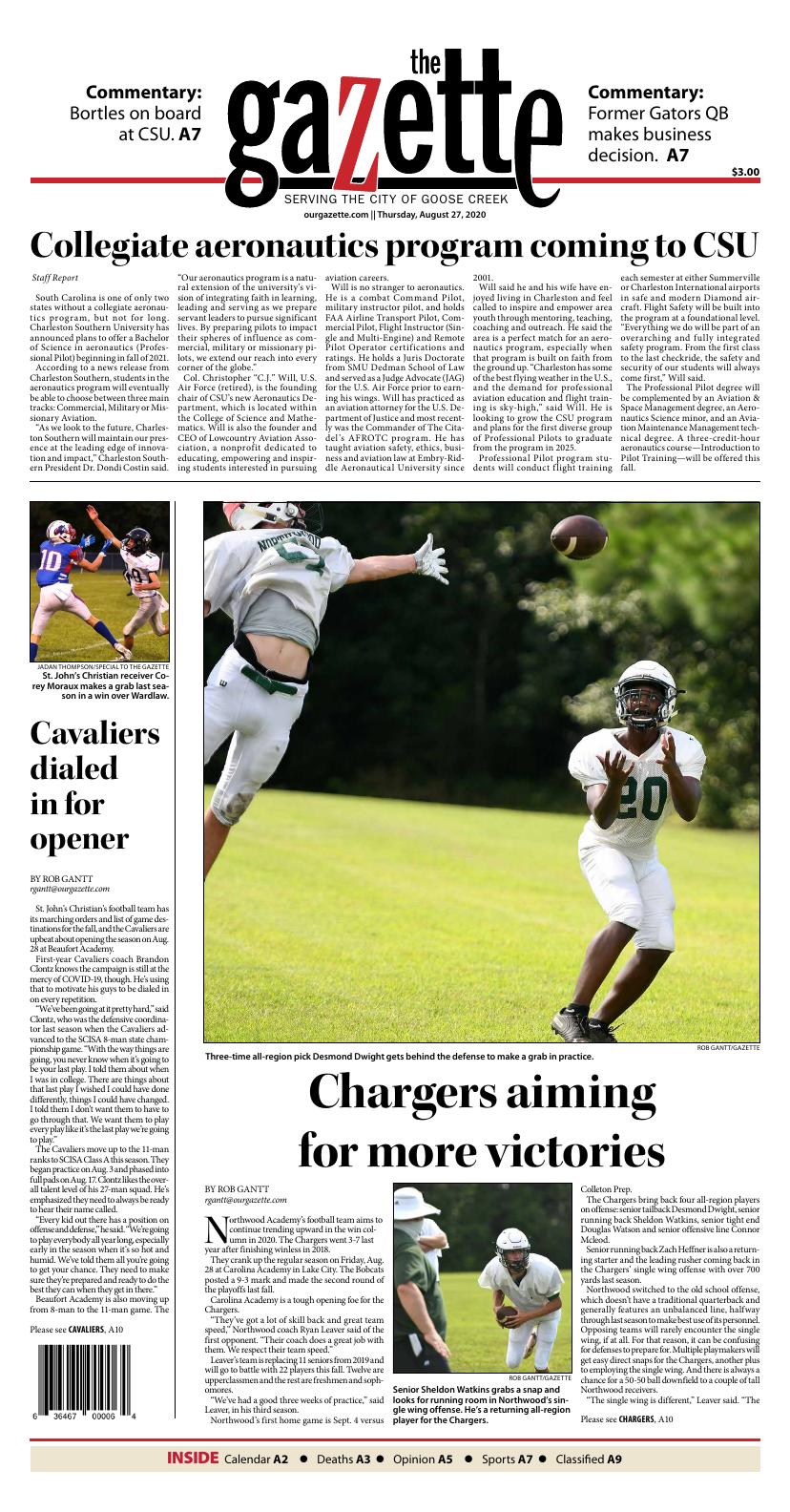 South Carolina is one of only two states without a collegiate aeronautics program, but not for long. Charleston Southern University has announced plans to offer a Bachelor of Science in aeronautics (Professional Pilot) beginning in fall of 2021.

According to a news release from Charleston Southern, students in the aeronautics program will eventually be able to choose between three main tracks: Commercial, Military or Missionary Aviation.

“As we look to the future, Charleston Southern will maintain our presence at the leading edge of innovation and impact,” Charleston Southern President Dr. Dondi Costin said. “Our aeronautics program is a natural extension of the university’s vision of integrating faith in learning, leading and serving as we prepare servant leaders to pursue significant lives. By preparing pilots to impact their spheres of influence as commercial, military or missionary pilots, we extend our reach into every corner of the globe.”

Col. Christopher “C.J.” Will, U.S. Air Force (retired), is the founding chair of CSU’s new Aeronautics Department, which is located within the College of Science and Mathematics. Will is also the founder and CEO of Lowcountry Aviation Association, a nonprofit dedicated to educating, empowering and inspiring students interested in pursuing aviation careers.

Will is no stranger to aeronautics. He is a combat Command Pilot, military instructor pilot, and holds FAA Airline Transport Pilot, Commercial Pilot, Flight Instructor (Single and Multi-Engine) and Remote Pilot Operator certifications and ratings. He holds a Juris Doctorate from SMU Dedman School of Law and served as a Judge Advocate (JAG) for the U.S. Air Force prior to earning his wings. Will has practiced as an aviation attorney for the U.S. Department of Justice and most recently was the Commander of The Citadel’s AFROTC program. He has taught aviation safety, ethics, business and aviation law at Embry-Riddle Aeronautical University since 2001.

Will said he and his wife have enjoyed living in Charleston and feel called to inspire and empower area youth through mentoring, teaching, coaching and outreach. He said the area is a perfect match for an aeronautics program, especially when that program is built on faith from the ground up. “Charleston has some of the best flying weather in the U.S., and the demand for professional aviation education and flight training is sky-high,” said Will. He is looking to grow the CSU program and plans for the first diverse group of Professional Pilots to graduate from the program in 2025.

Professional Pilot program students will conduct flight training each semester at either Summerville or Charleston International airports in safe and modern Diamond aircraft. Flight Safety will be built into the program at a foundational level. “Everything we do will be part of an overarching and fully integrated safety program. From the first class to the last checkride, the safety and security of our students will always come first,” Will said.

The Professional Pilot degree will be complemented by an Aviation & Space Management degree, an Aeronautics Science minor, and an Aviation Maintenance Management technical degree. A three-credit-hour aeronautics course—Introduction to Pilot Training—will be offered this fall.

Three-time all-region pick Desmond Dwight gets behind the defense to make a grab in practice.

Northwood Academy’s football team aims to continue trending upward in the win column in 2020. The Chargers went 3-7 last year after finishing winless in 2018.

They were slated to crank up the regular season on Friday, Aug. 28 at Carolina Academy in Lake City but the Bobcats had to cancel the contest because a player tested positive for COVID-19.

Leaver figured it would be tough to make up the Carolina Academy game this season.

His team is replacing 11 seniors from 2019 and will go to battle with 22 players this fall. Twelve are upperclassmen and the rest are freshmen and sophomores.

“We’ve had a good three weeks of practice,” said Leaver, in his third season.

Senior running back Zach Heffner is also a returning starter and the leading rusher coming back in the Chargers’ single wing offense with over 700 yards last season.

Northwood switched to the old school offense, which doesn’t have a traditional quarterback and generally features an unbalanced line, halfway through last season to make best use of its personnel. Opposing teams will rarely encounter the single wing, if at all. For that reason, it can be confusing for defenses to prepare for. Multiple playmakers will get easy direct snaps for the Chargers, another plus to employing the single wing. And there is always a chance for a 50-50 ball downfield to a couple of tall Northwood receivers.

“The single wing is different,” Leaver said. “The guys have taken ownership of learning it. They’ve put the reps in. We’re excited. It’s like when Georgia Tech ran the triple option. It’s hard for scout teams to mimic it. I think we’ll be the only team that runs anything close to it. We’ve definitely got more installed this year. As a staff during this COVID-19 time we had a lot of time to talk and meet online and really learn.”

Many of the offensive starters will also get significant time on the defensive side of the ball.

Leaver expects the Chargers to be competitive on Friday nights this fall.

Prep_sports
Cavaliers dialed in for opener
By Rob Gantt rgantt@ourgazette.com

St. John’s Christian’s football team has its marching orders and list of game destinations for the fall, and the Cavaliers are upbeat about opening the season on Aug. 28 at Beaufort Academy.

First-year Cavaliers coach Brandon Clontz knows the campaign is still at the mercy of COVID-19, though. He’s using that to motivate his guys to be dialed in on every repetition.

“We’ve been going at it pretty hard,” said Clontz, who was the defensive coordinator last season when the Cavaliers advanced to the SCISA 8-man state championship game. “With the way things are going, you never know when it’s going to be your last play. I told them about when I was in college. There are things about that last play I wished I could have done differently, things I could have changed. I told them I don’t want them to have to go through that. We want them to play every play like it’s the last play we’re going to play.”

The Cavaliers move up to the 11-man ranks to SCISA Class A this season. They began practice on Aug. 3 and phased into full pads on Aug. 17. Clontz likes the overall talent level of his 27-man squad. He’s emphasized they need to always be ready to hear their name called.

“Every kid out there has a position on offense and defense,” he said. “We’re going to play everybody all year long, especially early in the season when it’s so hot and humid. We’ve told them all you’re going to get your chance. They need to make sure they’re prepared and ready to do the best they can when they get in there.”

Beaufort Academy is also moving up from 8-man to the 11-man game. The squads tangled last season in Moncks Corner and the Cavaliers pulled out a 30-14 victory.

The Eagles are led by former Beaufort High School coach Mark Clifford, who took over at BA in 2018. Clifford played football for Danny Ford at Clemson.

“I would be willing to bet he’s going to have his guys ready to play,” Clontz said. “They’re also moving up from 8-man (to SCISA Class AA). We’ll find out a lot more about everybody after Week 1.”

St. John’s Christian returns an all-state quarterback in senior Nai’Ryan Bookert. He was a dual threat last season in powering the Cavaliers to 39 points per game. Don’t be surprised to see him move into a slot or out wide at times.

“He’s like what can I do to make us better,” Clontz said. “We want to move him around some this year to let him showcase what he’s capable of doing at other positions and also prepare for the future. He’s been a good leader. He’s pushed his teammates.”

A collection of returning playmakers will get their totes, including senior receiver Corey Moraux, junior running back Bryce Taylor and speedy slot man Nick Jimenez, a senior.

Junior Jaden Bradley, the leading tackler returning from the other side of the ball, will get work in the slot and at running back. He’s also an option as a wildcat quarterback. Newcomers Malik Waheed, a big running back, and receiver Hayden Redders are in the mix, too.

Tall sophomore quarterback Ryan Pierce has a nice arm and is looking to produce in the passing game. Junior Matt Glover is a fullback/halfback and also an offensive tackle.

Juniors Kasey Bostick, Logan Forester and Gus Hutson are the anchors on the offensive front. Freshman Drayton Dupree is a young player to watch who is not afraid to mix it up with the older kids.

Most players on offense will see significant reps on the other side of the ball. In addition to Bradley, Clontz said Taylor stands out as a defender.

“In my opinion, he’s one of the best football players I’ve seen,” he said. “He’s raw. The day we started full pads, when we first drilled you could tell he didn’t care about his body. He has no concern. He’s something to watch. We’re really working hard with his discipline. He just wants to get to the ball all the time.”

The Cavaliers are slated to host Dillon Christian on Sept. 4. 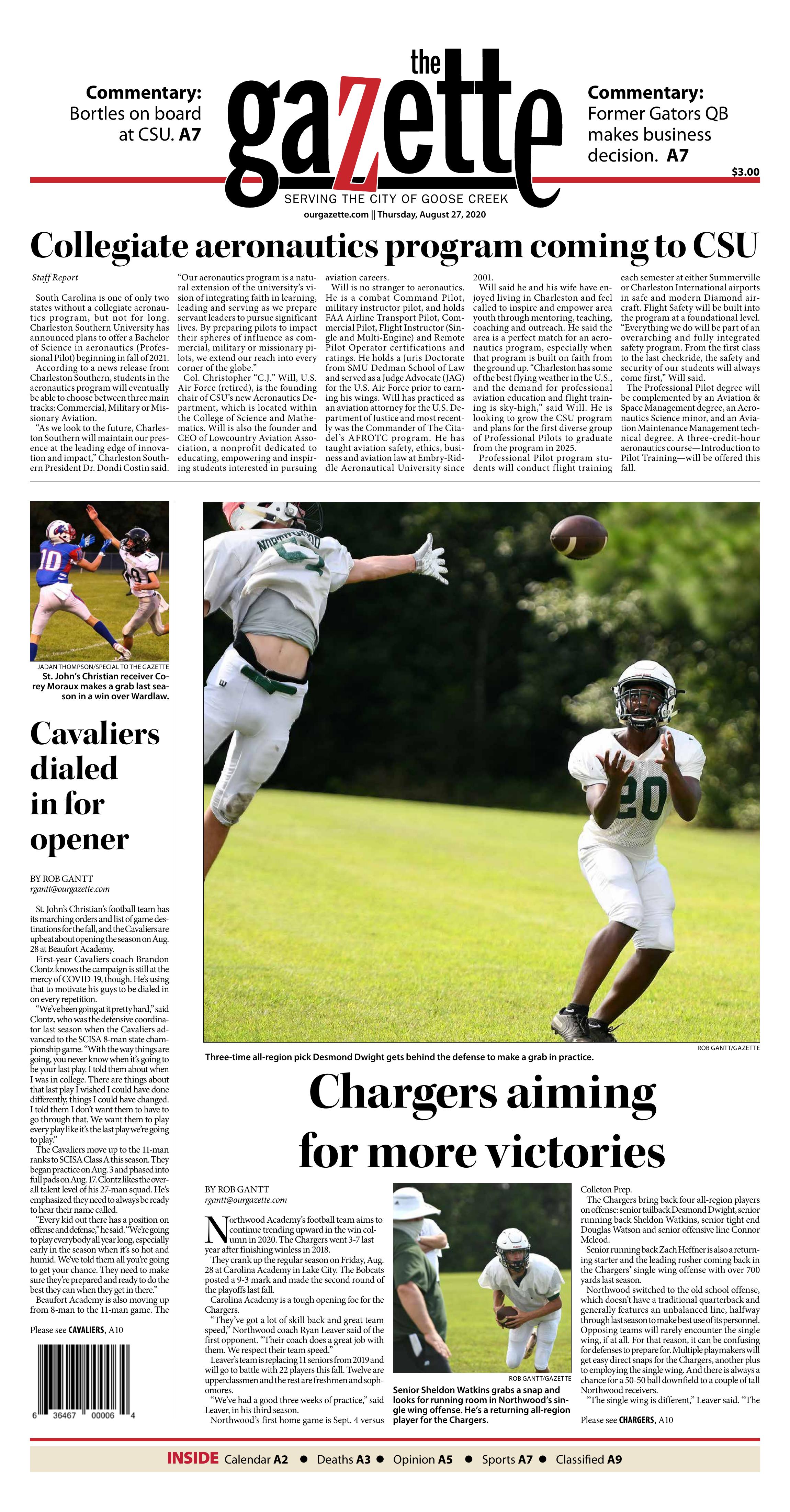