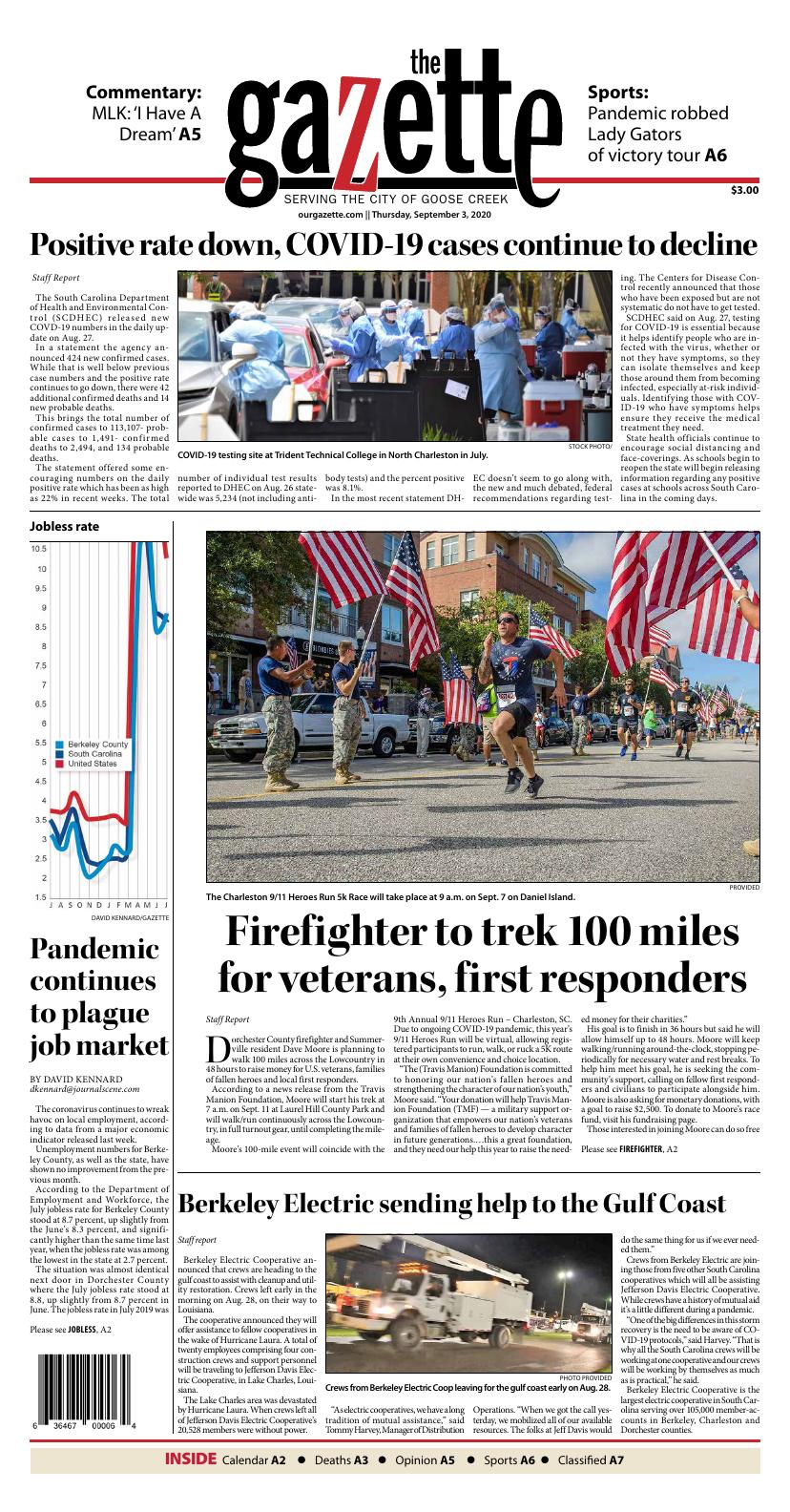 The South Carolina Department of Health and Environmental Control (SCDHEC) released new COVD-19 numbers in the daily update on Aug. 27.

In a statement the agency announced 424 new confirmed cases. While that is well below previous case numbers and the positive rate continues to go down, there were 42 additional confirmed deaths and 14 new probable deaths.

The statement offered some encouraging numbers on the daily positive rate which has been as high as 22% in recent weeks. The total number of individual test results reported to DHEC on Aug. 26 statewide was 5,234 (not including antibody tests) and the percent positive was 8.1%.

In the most recent statement DHEC doesn’t seem to go along with, the new and much debated, federal recommendations regarding testing. The Centers for Disease Control recently announced that those who have been exposed but are not systematic do not have to get tested.

SCDHEC said on Aug. 27, testing for COVID-19 is essential because it helps identify people who are infected with the virus, whether or not they have symptoms, so they can isolate themselves and keep those around them from becoming infected, especially at-risk individuals. Identifying those with COVID-19 who have symptoms helps ensure they receive the medical treatment they need.

State health officials continue to encourage social distancing and face-coverings. As schools begin to reopen the state will begin releasing information regarding any positive cases at schools across South Carolina in the coming days.

Dorchester County firefighter and Summerville resident Dave Moore is planning to walk 100 miles across the Lowcountry in 48 hours to raise money for U.S. veterans, families of fallen heroes and local first responders.

According to a news release from the Travis Manion Foundation, Moore will start his trek at 7 a.m. on Sept. 11 at Laurel Hill County Park and will walk/run continuously across the Lowcountry, in full turnout gear, until completing the mileage.

Moore’s 100-mile event will coincide with the 9th Annual 9/11 Heroes Run – Charleston, SC. Due to ongoing COVID-19 pandemic, this year’s 9/11 Heroes Run will be virtual, allowing registered participants to run, walk, or ruck a 5K route at their own convenience and choice location.

His goal is to finish in 36 hours but said he will allow himself up to 48 hours. Moore will keep walking/running around-the-clock, stopping periodically for necessary water and rest breaks. To help him meet his goal, he is seeking the community’s support, calling on fellow first responders and civilians to participate alongside him. Moore is also asking for monetary donations, with a goal to raise $2,500. To donate to Moore’s race fund, visit his fundraising page.

Those interested in joining Moore can do so free of charge, or can register for the official Virtual 9/11 Heroes Run – Charleston and receive a participant t-shirt and race swag.

Registered 5K participants are encouraged to do their virtual run/walk between Sept. 11 and Sept. 20, but registration will remain open until Nov. 1.

The 9/11 Heroes Run – Charleston, SC raises money for local first responders, as well as its umbrella 501c3 nonprofit organization, the Travis Manion Foundation. This year will mark the 9th year the local race has occurred, which is typically held on Daniel Island each September.

Moore is a seasoned firefighter currently employed with Dorchester County Fire-Rescue. Over over the years, he has routinely completed high-mileage run, walk and ruck challenges. He said the motive behind his recent personal and patriotic challenge is simple: “to honor all of those heroes that can’t (participate).”

“I have been wanting to try this (100-mile trek) for a few years. It just seems right to try it now. This will be, by far my longest distance in (turnout) gear,” Moore said.

The 9/11 Heroes Run 5K series was inspired by Marine 1st Lt. Travis Manion, who was killed by an enemy sniper in Iraq in April 2007 as he selflessly pulled his wounded teammates to safety. Before his final deployment, Travis visited Rescue One in NYC—famous for losing almost all of their men on 9/11—and returned home with a deeper passion about why he was fighting in Iraq. At its heart, the 9/11 Heroes Run is a tribute to a personal commitment to never forget the heroes of that day.

“During this time of unprecedented division in our country, I am inspired to see so many communities across the country and around the world put their differences aside to unite in honor of all those touched by the events of September 11th, 2001.” said Ryan Manion, President of Travis Manion Foundation. “We challenge all Americans to join us in ensuring our future generations never forget the sacrifices of our veterans, active duty military, first responders, and civilians who were affected by the attacks on 9/11 and in the wars since.”

Berkeley Electric Cooperative announced that crews are heading to the gulf coast to assist with cleanup and utility restoration. Crews left early in the morning on Aug. 28, on their way to Louisiana.

The cooperative announced they will offer assistance to fellow cooperatives in the wake of Hurricane Laura. A total of twenty employees comprising four construction crews and support personnel will be traveling to Jefferson Davis Electric Cooperative, in Lake Charles, Louisiana.

The Lake Charles area was devastated by Hurricane Laura. When crews left all of Jefferson Davis Electric Cooperative’s 20,528 members were without power.

“As electric cooperatives, we have a long tradition of mutual assistance,” said Tommy Harvey, Manager of Distribution Operations. “When we got the call yesterday, we mobilized all of our available resources. The folks at Jeff Davis would do the same thing for us if we ever needed them.”

Crews from Berkeley Electric are joining those from five other South Carolina cooperatives which will all be assisting Jefferson Davis Electric Cooperative. While crews have a history of mutual aid it’s a little different during a pandemic.

Berkeley Electric Cooperative is the largest electric cooperative in South Carolina serving over 105,000 member-accounts in Berkeley, Charleston and Dorchester counties.

The coronavirus continues to wreak havoc on local employment, according to data from a major economic indicator released last week.

Unemployment numbers for Berkeley County, as well as the state, have shown no improvement from the previous month.

According to the Department of Employment and Workforce, the July jobless rate for Berkeley County stood at 8.7 percent, up slightly from the June’s 8.3 percent, and significantly higher than the same time last year, when the jobless rate was among the lowest in the state at 2.7 percent.

The situation was almost identical next door in Dorchester County where the July jobless rate stood at 8.8, up slightly from 8.7 percent in June. The jobless rate in July 2019 was 2.6 percent.

Statewide, the unemployment number stood at 8.6 percent down only slightly from a month ago when the jobless number was 8.7 percent. A year ago the jobless rate was 2.7 percent.

“With a decreased unemployment rate, it’s no surprise that July’s release shows a promising trend of people rejoining the workforce,” Ellzey said. “Overall, I believe our state should be pleased with the recovery-driven direction of our economy. We are encouraged by the steady improvements. I believe the positive trends are indicative of the timing and measured steps taken by Governor McMaster when re-opening our economy.”

Data from the monthly Household Survey showed that some industries have performed better than others. 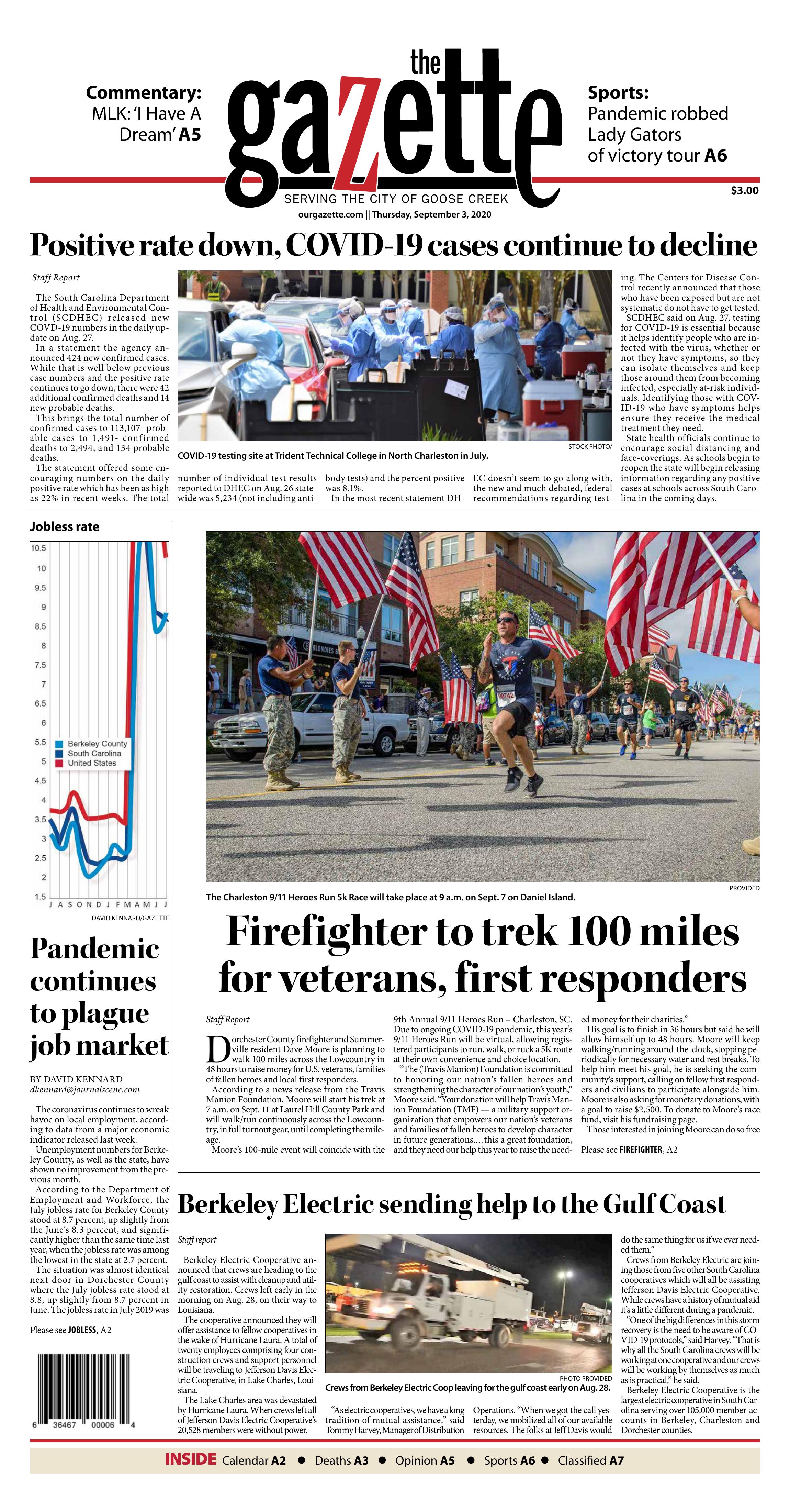