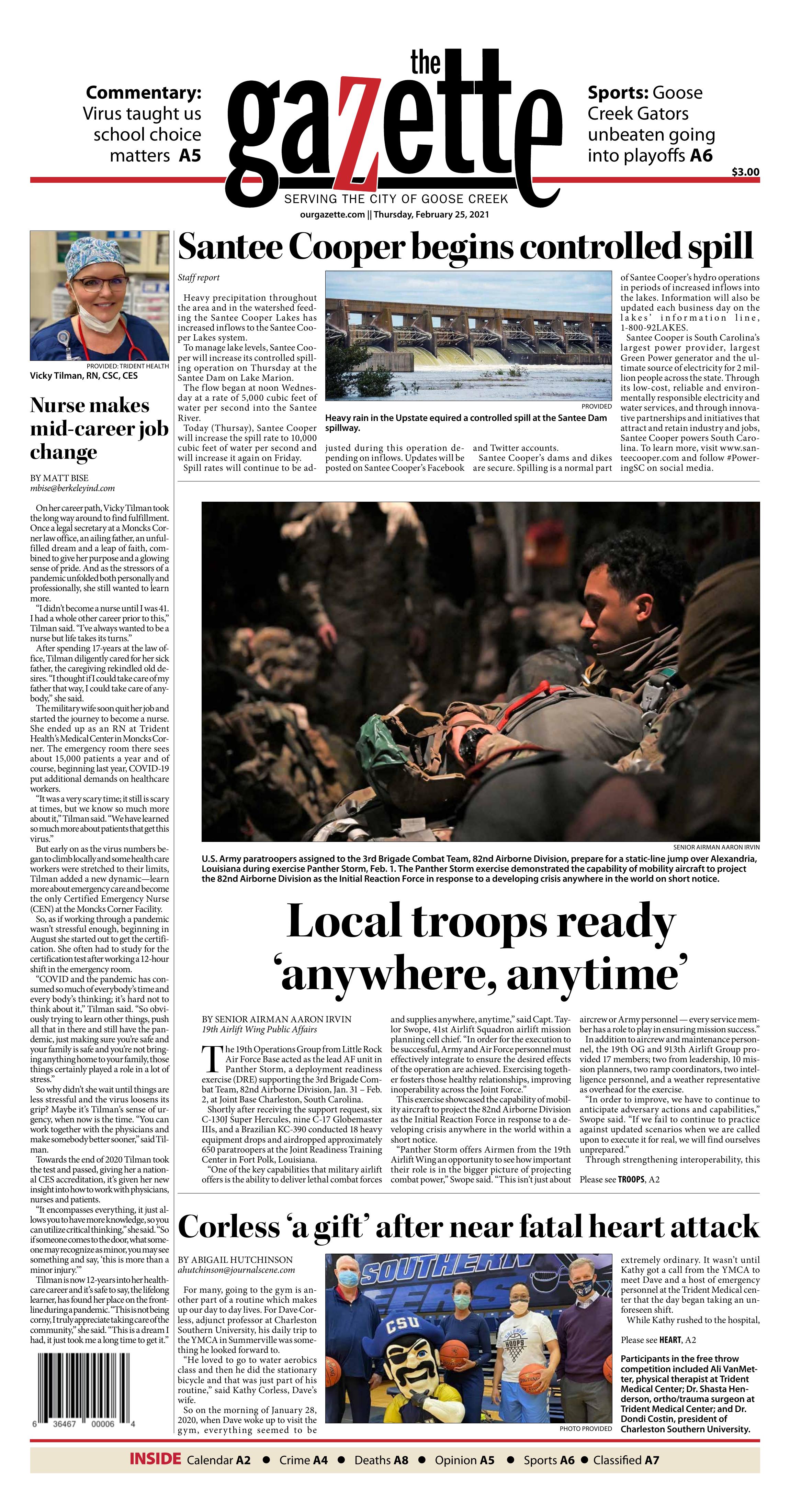 Heavy rain in the Upstate equired a controlled spill at the Santee Dam spillway.

To manage lake levels, Santee Cooper will increase its controlled spilling operation on Thursday at the Santee Dam on Lake Marion.

The flow began at noon Wednesday at a rate of 5,000 cubic feet of water per second into the Santee River.

Today (Thursay), Santee Cooper will increase the spill rate to 10,000 cubic feet of water per second and will increase it again on Friday.

Spill rates will continue to be adjusted during this operation depending on inflows. Updates will be posted on Santee Cooper’s Facebook and Twitter accounts.

Santee Cooper’s dams and dikes are secure. Spilling is a normal part of Santee Cooper’s hydro operations in periods of increased inflows into the lakes. Information will also be updated each business day on the lakes’ information line, 1-800-92LAKES.

Santee Cooper is South Carolina’s largest power provider, largest Green Power generator and the ultimate source of electricity for 2 million people across the state. Through its low-cost, reliable and environmentally responsible electricity and water services, and through innovative partnerships and initiatives that attract and retain industry and jobs, Santee Cooper powers South Carolina. To learn more, visit www.santeecooper.com and follow #PoweringSC on social media.

Paratroopers assigned to the 3rd Brigade Combat Team, 82nd Airborne Division, board a C-130J Super Hercules during exercise Panther Storm at Joint Base Charleston, South Carolina, Feb. 1, 2021. The Panther Storm exercise demonstrated the capability of mobility aircraft to project the 82nd Airborne Division as the Initial Reaction Force in response to a developing crisis anywhere in the world on short notice.

U.S. Army paratroopers assigned to the 3rd Brigade Combat Team, 82nd Airborne Division, prepare for a static-line jump over Alexandria, Louisiana during exercise Panther Storm, Feb. 1. The Panther Storm exercise demonstrated the capability of mobility aircraft to project the 82nd Airborne Division as the Initial Reaction Force in response to a developing crisis anywhere in the world on short notice.

A U.S. Army paratrooper assigned to the 3rd Brigade Combat Team, 82nd Airborne Division, prepares for a static-line jump over Alexandria, Louisiana during exercise Panther Storm, Feb. 1, 2021. The Panther Storm exercise demonstrated the capability of mobility aircraft to project the 82nd Airborne Division as the Initial Reaction Force in response to a developing crisis anywhere in the world on short notice. (U.S. Air Force photo by Senior Airman Aaron Irvin)

“One of the key capabilities that military airlift offers is the ability to deliver lethal combat forces and supplies anywhere, anytime,” said Capt. Taylor Swope, 41st Airlift Squadron airlift mission planning cell chief. “In order for the execution to be successful, Army and Air Force personnel must effectively integrate to ensure the desired effects of the operation are achieved. Exercising together fosters those healthy relationships, improving inoperability across the Joint Force.”

This exercise showcased the capability of mobility aircraft to project the 82nd Airborne Division as the Initial Reaction Force in response to a developing crisis anywhere in the world within a short notice.

“Panther Storm offers Airmen from the 19th Airlift Wing an opportunity to see how important their role is in the bigger picture of projecting combat power,” Swope said. “This isn’t just about aircrew or Army personnel — every service member has a role to play in ensuring mission success.”

In addition to aircrew and maintenance personnel, the 19th OG and 913th Airlift Group provided 17 members; two from leadership, 10 mission planners, two ramp coordinators, two intelligence personnel, and a weather representative as overhead for the exercise.

“In order to improve, we have to continue to anticipate adversary actions and capabilities,” Swope said. “If we fail to continue to practice against updated scenarios when we are called upon to execute it for real, we will find ourselves unprepared.”

Through strengthening interoperability, this DRE validated both branches’ capabilities while simultaneously building the skills and knowledge necessary for rapid deployment.

Col. Andrew Roddan, 19th OG commander, added that the personnel and heavy equipment drops are representative of how we deliver agile combat airlift in a professional, trusted manner in support of our national security objectives anywhere, any time as the Ready Warriors of the 19th AW.

“Our primary objective is to continuously advance tactical warfighting capabilities across the Mobility Air Force while expanding our relationship with sister services,” Roddan said. “Large-scale exercises such as Panther Storm aim to better prepare our Joint Force to possess decisive advantages for any potential conflict, while remaining proficient across the entire spectrum of readiness.”

For many, going to the gym is another part of a routine which makes up our day to day lives. For Dave Corless, adjunct professor at Charleston Southern University, his daily trip to the YMCA in Summerville was something he looked forward to.

“He loved to go to water aerobics class and then he did the stationary bicycle and that was just part of his routine,” said Kathy Corless, Dave’s wife.

So on the morning of January 28, 2020, when Dave woke up to visit the gym, everything seemed to be extremely ordinary. It wasn’t until Kathy got a call from the YMCA to meet Dave and a host of emergency personnel at the Trident Medical center that the day began taking an unforeseen shift.

While Kathy rushed to the hospital, two bystanders in the men’s locker room, the place of Corless’s incident, quickly responded to the critical situation. What is believed to have happened is that as Corless experienced his heart attack in the locker room, he fell backwards and hit his head on the floor, causing significant cognitive impairment in addition to the cardiac arrest.

Two members of the YMCA who happened to be nearby stepped in to perform CPR on him, which they coincidentally were trained in. As the men attempted to bring him back, a staff member on duty arrived with an Automated external defibrillator, or AED, to use on him. Emergency medical services were called as Corless showed no signs of improvement. Ultimately, Corless began breathing again with help from EMS workers and as he did, he embarked on a long road to recovery.

As Corless was shuffled into the intensive care cardiac unit at Trident Medical Center, where he stayed for the next 3 weeks, Kathy arrived at the scene.

“The cardiologist gave us a very grim report and we were shocked at that point. He said, you know with something like this, ten percent make it. So that was of course a shocker,” Kathy said.

Corless spent a total of six weeks at Trident Medical Center. After his 3 weeks in ICU, he was transitioned into a rehab area of the hospital for the following 3 weeks. When he was eventually discharged on February 25, 2020, he was considered a miracle.

“We have so much to be thankful for. [after leaving the hospital] We had physical therapy for 6 months, we had occupational therapy for another three months and we had a speech therapist that came for 5 months to our house. So it is a long recovery, but he is alive and he is a gift,” Kathy said.

It has been nearly a year since the Corless’s official discharge date from the hospital and in return, Trident Medical Center hoste free throw fundraiser to celebrate Corless’ anniversary of surviving his near fatal heart attack.

The free throw contest, which raised money for the American heart association, stood as a reminder of Corless’s story and the importance of heart health at large. The team of shooters were able to make 182 free throws in the allotted 10 minute time limit, contributing to a grand total of $5,000 raised.

This year in March, Kathy and Dave will be celebrating their 49th wedding anniversary. A day that would look very different if not for the bystanders, YMCA staff members and the Trident Medical staff hadn’t been present at the time of need.

“We are the blessed family because I know that it doesn’t happen like that for every family, and we are so thankful,” Kathy said.

On her career path, Vicky Tilman took the long way around to find fulfillment. Once a legal secretary at a Moncks Corner law office, an ailing father, an unfulfilled dream and a leap of faith, combined to give her purpose and a glowing sense of pride. And as the stressors of a pandemic unfolded both personally and professionally, she still wanted to learn more.

“I didn’t become a nurse until I was 41. I had a whole other career prior to this,” Tilman said. “I’ve always wanted to be a nurse but life takes its turns.”

The military wife soon quit her job and started the journey to become a nurse. She ended up as an RN at Trident Health’s Medical Center in Moncks Corner. The emergency room there sees about 15,000 patients a year and of course, beginning last year, COVID-19 put additional demands on healthcare workers.

But early on as the virus numbers began to climb locally and some health care workers were stretched to their limits, Tilman added a new dynamic—learn more about emergency care and become the only Certified Emergency Nurse (CEN) at the Moncks Corner Facility.

So, as if working through a pandemic wasn’t stressful enough, beginning in August she started out to get the certification. She often had to study for the certification test after working a 12-hour shift in the emergency room.

“COVID and the pandemic has consumed so much of everybody’s time and every body’s thinking; it’s hard not to think about it,” Tilman said. “So obviously trying to learn other things, push all that in there and still have the pandemic, just making sure you’re safe and your family is safe and you’re not bringing anything home to your family, those things certainly played a role in a lot of stress.”

So why didn’t she wait until things are less stressful and the virus loosens its grip? Maybe it’s Tilman’s sense of urgency, when now is the time. “You can work together with the physicians and make somebody better sooner,” said Tilman.

Towards the end of 2020 Tilman took the test and passed, giving her a national CEN accreditation, it’s given her new insight into how to work with physicians, nurses and patients.

“It encompasses everything, it just allows you to have more knowledge, so you can utilize critical thinking,” she said. “So if someone comes to the door, what someone may recognize as minor, you may see something and say, ‘this is more than a minor injury.’”

Tilman is now 12-years into her healthcare career and it’s safe to say, the lifelong learner, has found her place on the frontline during a pandemic. “This is not being corny, I truly appreciate taking care of the community,” she said. “This is a dream I had, it just took me a long time to get it.”