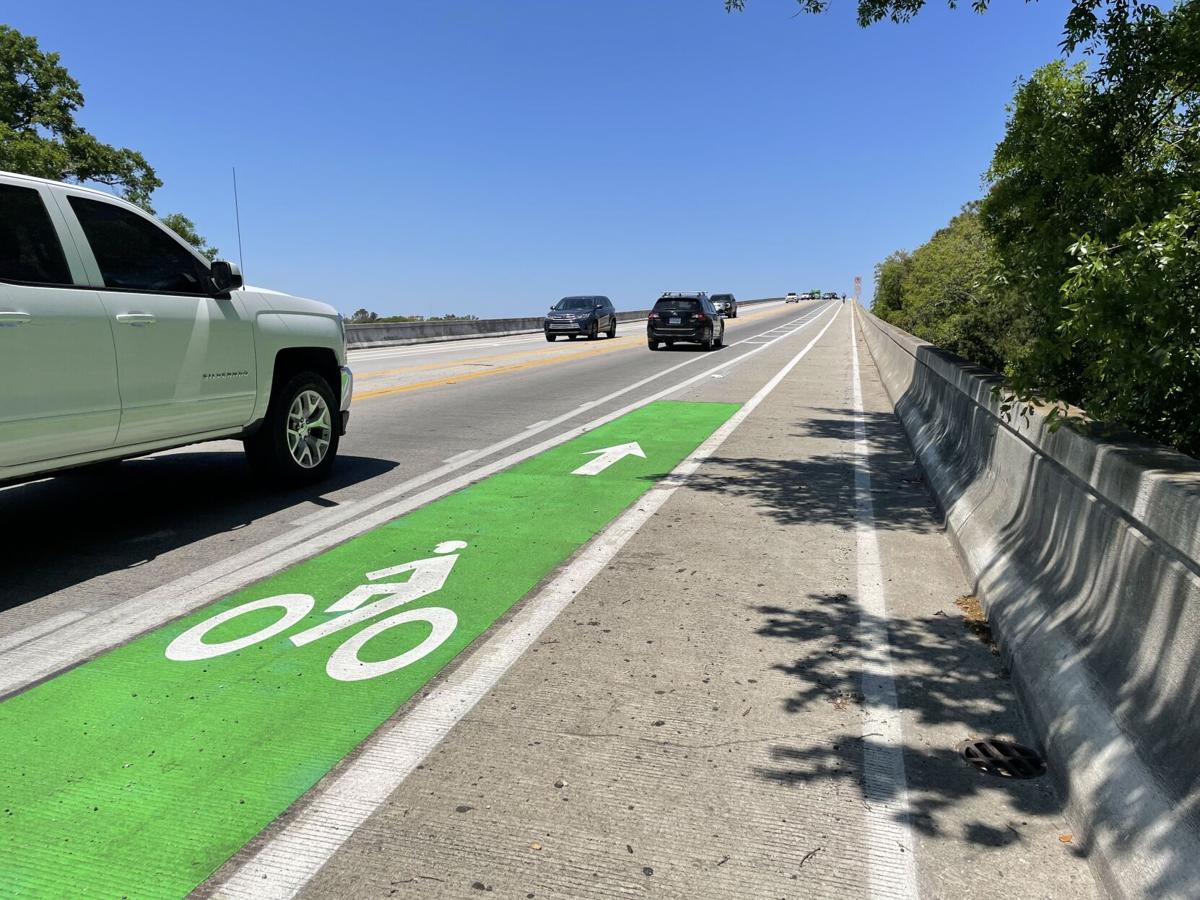 The S.C. Department of Transportation restriped the Isle of Palms connector to reduce its median and add marked bike and pedestrian spaces. Robert Behre/Staff 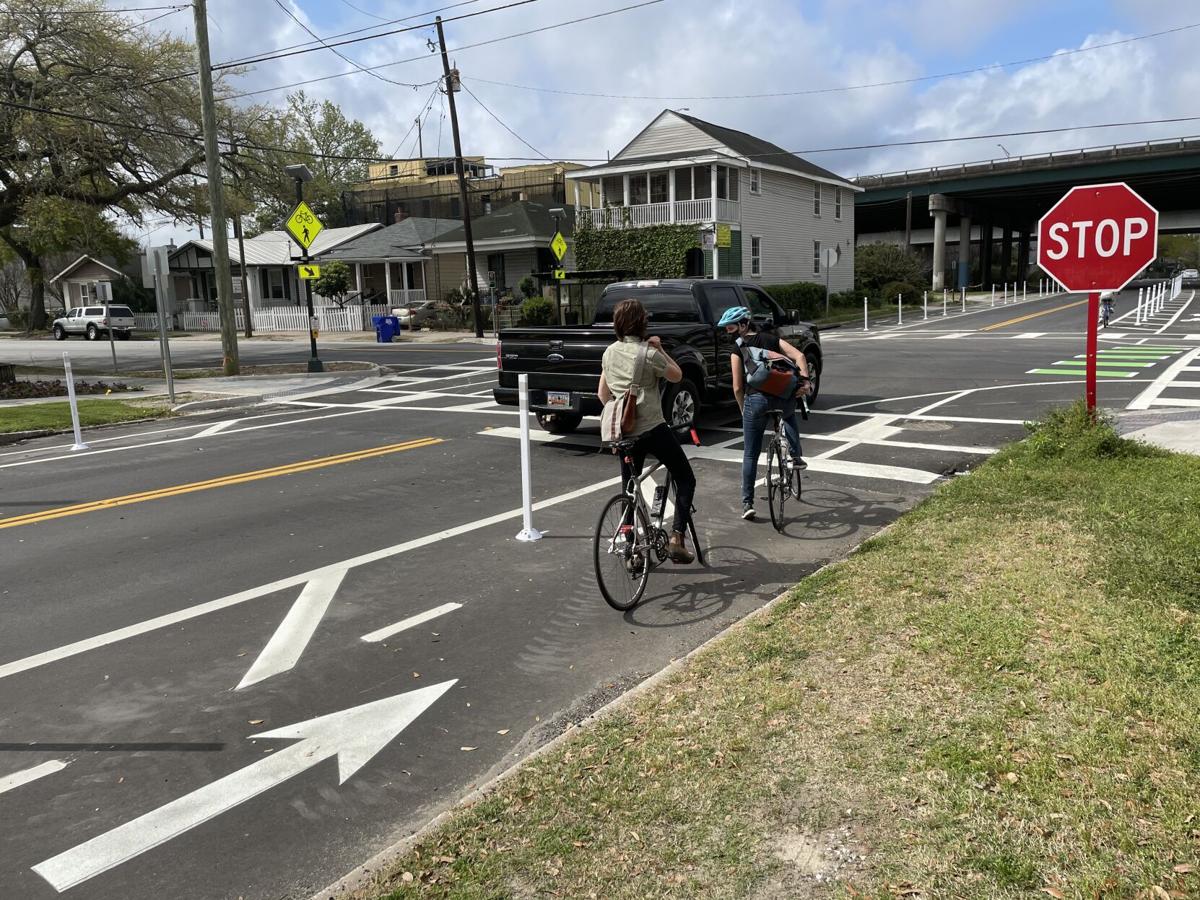 Brigade Street, from Morrison Drive to Meeting Street, has new bike lanes and other safety upgrades where Brigade intersects with Meeting. Robert Behre/Staff

The S.C. Department of Transportation restriped the Isle of Palms connector to reduce its median and add marked bike and pedestrian spaces. Robert Behre/Staff

Brigade Street, from Morrison Drive to Meeting Street, has new bike lanes and other safety upgrades where Brigade intersects with Meeting. Robert Behre/Staff

For decades, Charleston area cycling advocates have been seeing red because our streets aren’t painted green. That has changed this year with two important and dramatic projects we hope will herald the beginning of a new era where state and local governments work together to create safe, accessible alternatives for those who want to walk and bike rather than drive.

The retrofit along Brigade Street in Charleston’s upper peninsula and the restriping of the Isle of Palms connector might be the most dramatic bike lane creations locally since the Arthur Ravenel Jr. Bridge opened more than 15 years ago with its 10-foot-wide dedicated bike and pedestrian lane.

These long-overdue improvements were not without controversy, and they’re not the be-all and end-all for how pedestrians, cyclists and cars should use these shared corridors. But for a state and region that have been slow to provide bike-ped accommodations — and have seen regrettably high rates of bike and pedestrian fatalities — the projects are something to cheer about. We hope they’re the first of many more such improvements to come.

While these two projects represent some of the first major changes on the ground, the region has done much planning for new bike lanes, multiuse paths and the like. We could be at a tipping point — particularly with the $22 million Ashley River bike-ped bridge in the works, a promising effort to speed up work on the bike-ped network known as Mount Pleasant Way, the planned Lowcountry Lowline and significant bike-ped improvements throughout much of North Charleston as part of the Lowcountry Rapid Transit bus line that could start running by 2026.

The Isle of Palms connector was placed on a “road diet” of sorts: It was restriped with a much narrower median and generous bike lanes along both sides, including bike lanes accented with an occasional splash of green paint. The color shows there’s still potential for conflict: The new bike lanes are buffered from car traffic with a striped section, but there’s no barrier. The S.C. Department of Transportation made the change as part of its effort to improve conditions along the East Coast Greenway after a fatality in southern Charleston County. The Isle of Palms connector is part of that much-larger route through the state.

The Brigade Street improvement project was led by the city of Charleston with the state’s consent. It includes new bike lanes on both sides of Brigade, a wide buffer with physical “delineators” and green paint through the notoriously dangerous Brigade-Meeting intersection. We’re not huge fans of the delineators, which essentially are white plastic poles about 3 feet tall. Vehicles with inattentive (or worse) drivers can knock them down, but they’ll know it.

Still, the improvements make for a safer and more inviting east-west corridor that links the growing north Morrison Drive corridor with the rest of the peninsula, particularly the Lowcountry Lowline route. Charleston Moves, the region’s main bike-ped advocacy group, called it “a massive precedent-setting accomplishment.”

The improvements were made as a sort of compromise after efforts to get a traffic light at Meeting and Brigade were shot down; the work also included curb extensions to shorten the walk across Meeting Street, visual flashers to warn motorists on Meeting of a pedestrian crossing, and even audible signals and ADA-compliant warning surfaces to assist the disabled.

Artist Kelvin Blufton, who painted a small utility box as an aesthetic touch on the project, attended its grand opening. He is familiar with the area around Brigade because he has had family here, and he also used to investigate serious traffic accidents here during his years as a city police officer.

“This is so needed,” he said, adding that most of the accidents at the intersection stemmed from “the fact that they had to risk their life to go into traffic.”

These two projects won’t do much by themselves to improve overall bike-ped safety across our region; there is so much other work still to do. But if they signal a meaningful new commitment toward realizing our longstanding goal of providing more and different ways to get around — and we certainly hope they do — then we all should be seeing a little more green and a lot less red.