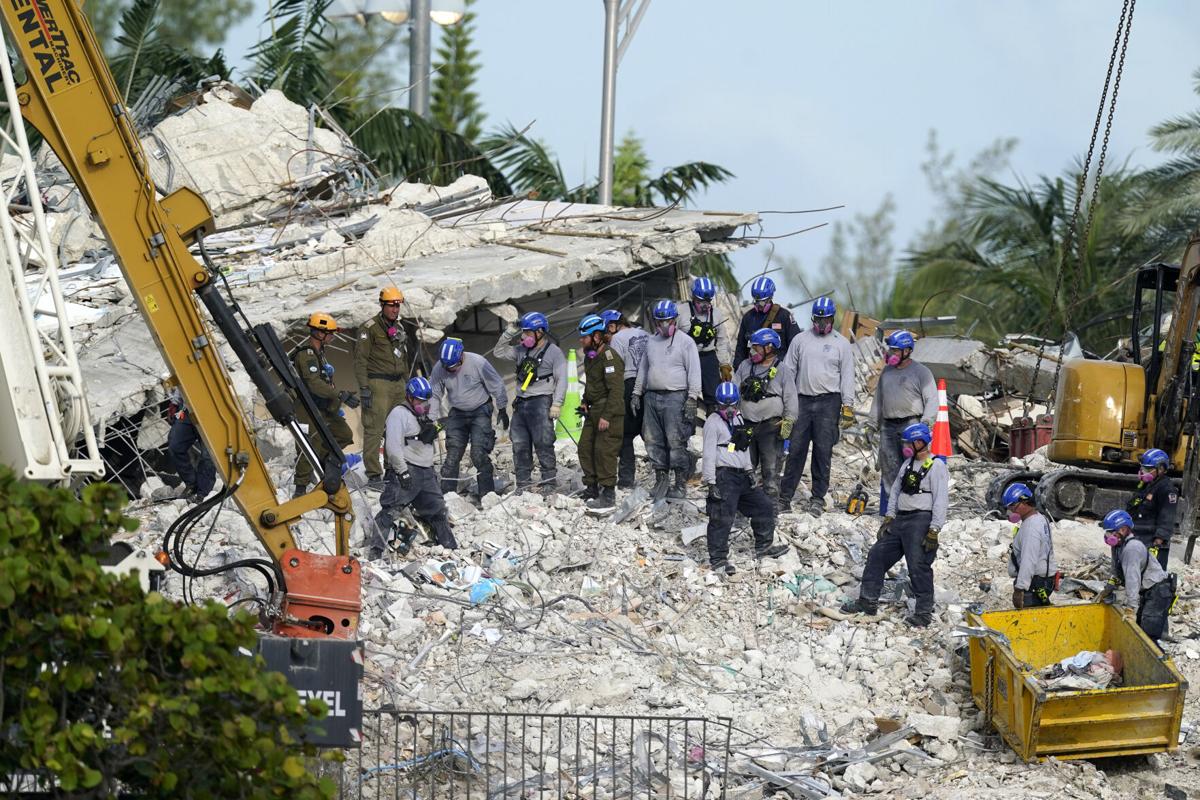 Rescue crews work at the site of the collapsed Champlain Towers South condo building after the remaining structure was demolished Sunday, in Surfside, Fla., on July 5, 2021. Many people are unaccounted for in the rubble of the building which partially collapsed June 24. Lynne Sladky/AP 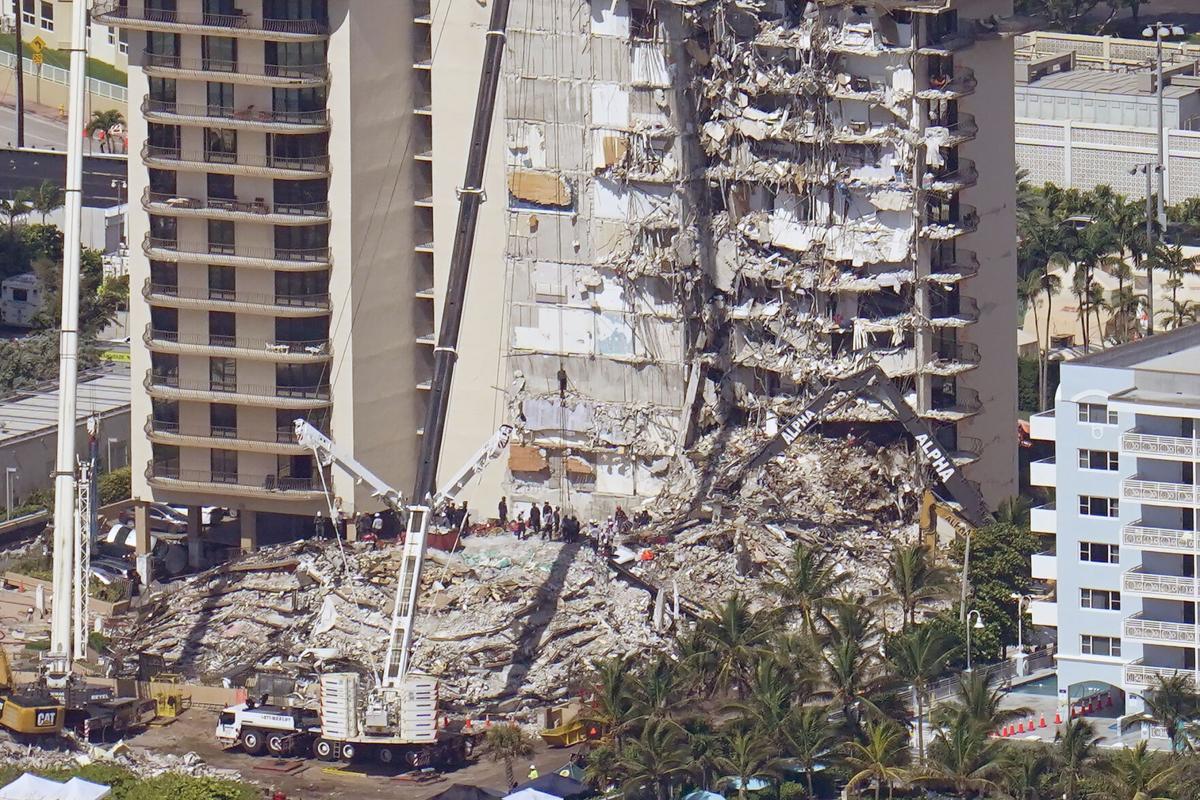 Rescue crews work at the site of the collapsed Champlain Towers South condo building after the remaining structure was demolished Sunday, in Surfside, Fla., on July 5, 2021. Many people are unaccounted for in the rubble of the building which partially collapsed June 24. Lynne Sladky/AP

No one expects South Carolina will ever see the kind of dramatic building failure that killed 98 people north of Miami last June, when an entire side of a 13-story condominium collapsed as most residents slept. Of course, no one expected it would ever happen in Florida, either.

We still don’t know exactly what went wrong with the Champlain Towers South building in Surfside, but media reports point to many possible factors, including flaws in the building’s original design and construction as well as serious maintenance problems that went unaddressed for years. It’s important to realize we still don’t know certain things that, once known, will help us prevent a similar catastrophe from happening again.

But we already know enough to begin a serious conversation about what additional steps state and local governments might take to help ensure that South Carolina’s tallest buildings are adequately monitored for their structural integrity, not simply for fire safety.

These significantly larger buildings — which only began to appear in most S.C. communities in the last half of the 20th century — pose a potential threat to public safety on a much larger scale than a two- or three-story house.

Ironically, Miami-Dade County is one of the few U.S. jurisdictions that require owners to recertify their building’s structural integrity after it has stood for 40 years. While that requirement did not prevent last year’s collapse, it did generate structural reports that sounded alarms, including a 2018 inspection that found evidence of major structural damage to the concrete slab below the pool deck and significant cracking and crumbling of the columns, beams and walls of the parking garage under the building. Repairs likely would have begun sooner if not for a condo board roiled by the prospect of the large assessments to pay for them.

Mark Dillon, a Charleston structural engineer and president of ADC Engineering, has done structural design and analysis for both new designs and forensic investigations, says that while the evidence of what went wrong in Surfside is still being analyzed, there are lessons already for the rest of us. “South Carolina should be particularly diligent in taking preventative action due to the similarity of having a coastal salt air environment similar to Surfside,” he told us. “While Charleston may be the largest coastal city, the similarities in construction type and height take my thoughts more toward Myrtle Beach with the number of reinforced concrete, beachfront high rises there.”

Residents in such buildings should make sure they share any maintenance problems they see, such as signs of leaks, cracks and other new building blemishes. Property managers and maintenance staff must communicate these potential problems to their bosses, who, in turn, should follow up by contacting the right professionals. While a building’s structure can last centuries, it often needs maintenance just like paint, air conditioning and roofs.

S.C. cities and counties have building inspectors — and some big buildings are subject to special inspections by third-party experts — but their work is largely limited to the construction phase.

Local governments here don’t require post-occupancy structural inspections, although some may occur if there’s a problem noticed or major renovation planned or in the case of a sale.

Unlike in Miami-Dade, condominium regime boards in South Carolina don’t have to recertify their buildings, and may keep any knowledge of problems to themselves. Legislators should consider whether periodic inspections of large buildings should be required and made public. We believe that would make it less likely for building owners to delay needed repairs.

So do some others. We’re encouraged that top city of Charleston staff have begun discussions with structural engineers about a possible program to review older, larger buildings, and believe state lawmakers should consider forming a special group to study how the state can better ensure the safety of older buildings that are six stories or more. Ken Granata, Charleston’s chief building official, said the challenge is making any additional regulation meaningful but not overly burdensome. “We don’t want it to be a bureaucratic process where it’s just paper pushing, where you just check a box,” he said.

The details of any new local or state regulation are critical and deserve ample public airing. While government may never be able to compensate fully for what a building owner will not do in terms of maintenance, it can do more to nudge the more neglectful owners toward at least minimal safety steps that more attentive owners would take without that push.

We obviously hope no high-rise building in South Carolina has deteriorated to the point that something similar to Surfside could happen here. But it would be nice not to rely solely on hope.

Editorial: Buy it or not, Berkeley board's explanation for firing is a refreshing change

Editorial: 'Critical race theory' in SC classrooms? Depends on how you define it.

If it wasn’t already, several developments in recent weeks should make it clear that “critical race theory” is in the eyes of the beholder. Read moreEditorial: 'Critical race theory' in SC classrooms? Depends on how you define it.

Editorial: Pursue teacher housing plan — in the open, with attention to details

The idea of … Read moreEditorial: Pursue teacher housing plan — in the open, with attention to details