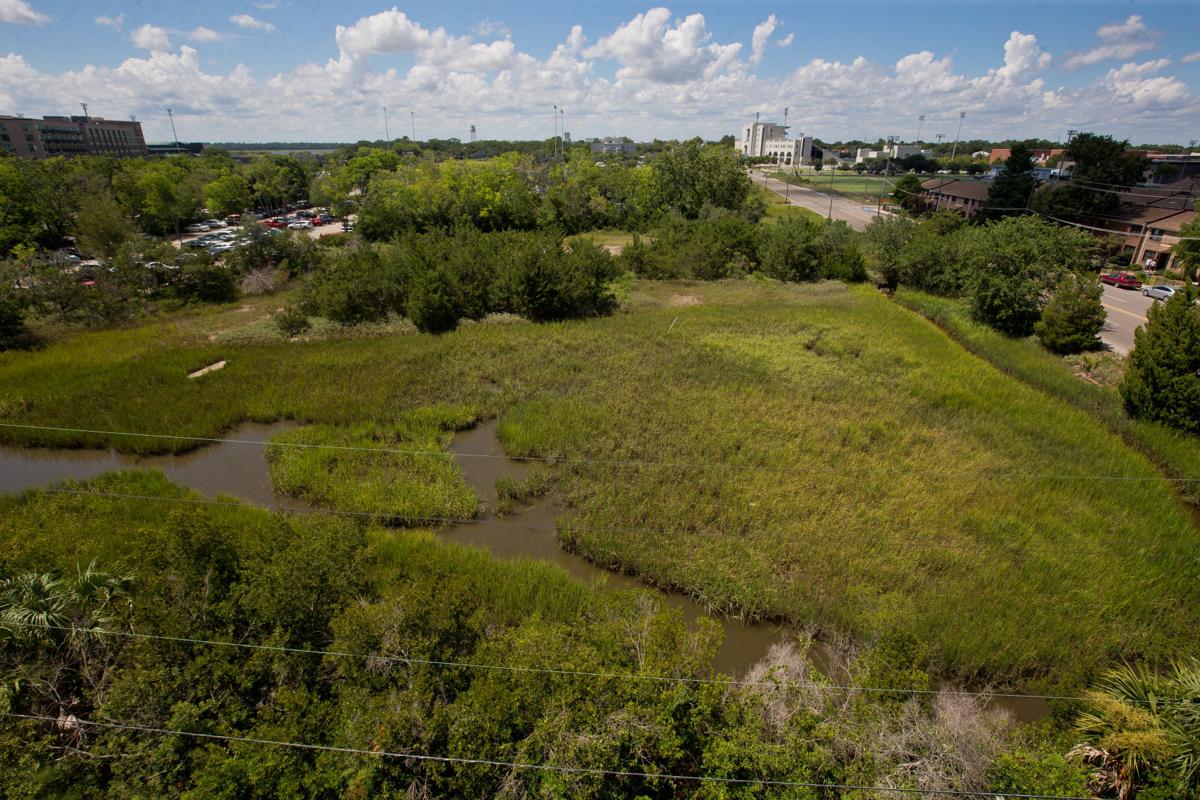 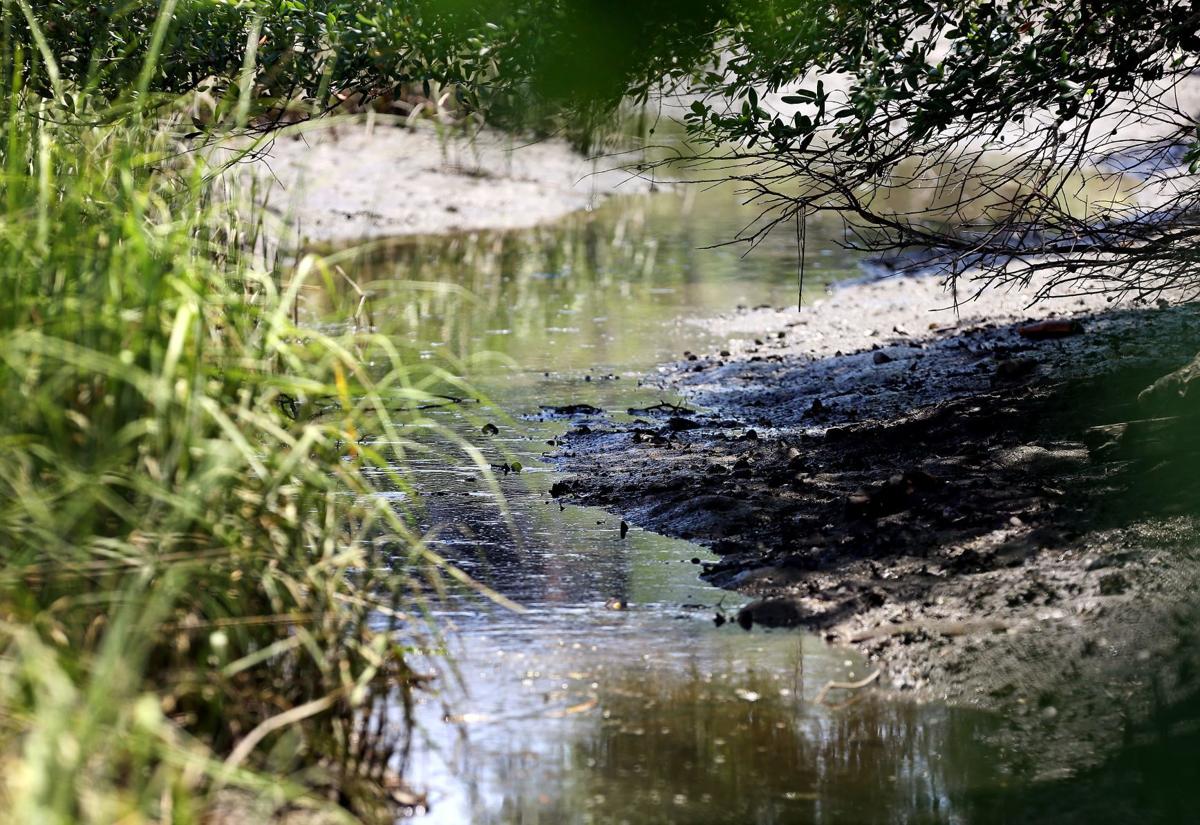 Wetlands have taken over near where a landfill was built over the original Gadsden Creek.

Gadsden Creek, a strip of tidal wetland carved out of a former landfill on the northwest edge of the Charleston peninsula, can be saved.

There’s not much doubt about that. Far worse environmental disasters have been cleaned up.

But it’s a fairer question to ask if cleaning up a polluted, flood-prone creek that was formed in its most recent iteration as a drainage ditch is really worth the time and money it might require.

That’s a matter for serious debate. And one has rightly intensified over the past few months as developers with the WestEdge project — a planned and partially constructed mixed-use housing, commercial and research community — seek permits to fill most of Gadsden Creek and replace it with an engineered drainage system.

WestEdge officials say they need the land to make their development work and that filling in the creek will be a net benefit. Several community leaders and local politicians want it cleaned up rather than paved over.

An ideal solution is probably somewhere in between.

A history of abuse

Gadsden Creek is a flash point not necessarily because it’s beautiful or ecologically important, but because it’s a symbol of some of Charleston’s past mistakes and a chance to take stock of its values and priorities moving forward.

At too many points in Charleston’s history, communities near Gadsden Creek have been trampled in the name of progress.

Gadsden Green public housing replaced existing homes with a barracks-style development. The landfill that clogged Gadsden Creek was built next door just a few years later. Then the Crosstown bulldozed homes and formed a de facto border wall between the upper and lower parts of the peninsula.

The effects of these decisions are still being felt today. And WestEdge is an opportunity to get things right for a change. Ideally, that would include a plan to protect Gadsden Creek as an amenity rather than a nuisance.

“The connection between black folk and that creek has all but been erased,” said Tamika Gadsden, who has helped lead the community group Protect Gadsden Creek. “It’s been covered up literally and figuratively for generations.”

She said that it’s important for people to visualize restoring that connection.

“Maybe not every acre gets developed, and that’s OK.”

There are flooding issues — both existing tidal floods and future problems related to sea level rise and climate change — that must also be taken into consideration.

Dutch officials and an international team of water management and city planning experts convened in Charleston last month as part of the Dutch Dialogues process that teaches communities to “live with water” rather than fighting it back.

Gadsden Creek could be a perfect chance to embrace that mindset, albeit with the caveat that the water there isn’t particularly livable in its current state.

Editorial: Gadsden Creek a chance to avoid Charleston flooding mistakes of the past

“That’s in line with what the city has been shifting to,” said Matthew Fountain, Charleston’s director of stormwater management, on the Dutch approach. “They said this is an area where you should consider protecting this marsh but you need to deal with the contamination issue and the flooding issue.”

Instead, WestEdge developers are proposing to replace the creek with a system of culverts, tidal check valves, underground storage and other fixes that they say will improve drainage compared to the status quo.

Though a detailed plan hasn’t been finalized, the concept thus far is the opposite of the kind of solutions suggested in the Dutch Dialogues process.

Gadsden Creek and the surrounding wetlands take up about 4 acres in a roughly 30-acre development, but the creek’s path through the center of the property causes it to impact a much larger portion of the project as planned.

And that raises a fair question about whether economic or ecological considerations are taking priority.

“What is the prospect for resolving some of the insults that have been done to the creek and the community over the years?” wondered Dana Beach, who headed the Coastal Conservation League when that organization worked with city officials and developers on the WestEdge plan.

He explained that Gadsden Creek could be saved — at a price — but suggested that preserving it was less important than other issues affecting that part of the peninsula.

The Coastal Conservation League and Charleston Waterkeeper back the plan to fill Gadsden Creek on the grounds that it could prevent the possibility of future pollution in the Ashley River and help with the flooding situation on that part of the peninsula.

Other cities have mounted ambitious restoration efforts at former landfills, and dirtier messes have been cleaned up in wetlands. The main issue is the cost.

It’s fair to say that Gadsden Creek isn’t Charleston’s top priority, environmental or otherwise. It’s not even necessarily the top priority in its immediate neighborhood. But that doesn’t mean it shouldn’t get a chance at redemption before being paved over.

And the public regulatory or advisory agencies that have explicitly weighed in on the issue so far agree.

Give the creek a chance

“No basis or reasonable justification has been provided for … the elimination of all on-site alternatives that involve fewer impacts [to Gadsden Creek],” wrote representatives of the S.C. Department of Natural Resources in response to the WestEdge request to fill the creek.

The U.S. Fish and Wildlife Service and the National Oceanographic and Atmospheric Administration also worried about the lack of thorough research into alternatives and the potential that removing a wetland could exacerbate rather than improve flooding.

The state Department of Health and Environmental Control will have a public forum to discuss Gadsden Creek at 6 p.m. Wednesday in the Burke High School auditorium. Those interested should take the opportunity to weigh in on the proposal before any final action.

Public hearing scheduled for Aug. 7 on proposal to fill in Charleston's Gadsden Creek

The state Department of Health and Environmental Control will hold a public hearing in August on a proposal to fill in portions of Gadsden Creek and a former landfill so that further development of WestEdge can continue.

The problem remains that we just don’t know enough about Gadsden Creek to make an informed choice.

Contractors hired by the WestEdge developers documented contaminants in soil and groundwater samples on the larger property, which isn’t surprising for a former landfill, but haven’t analyzed surface water at the mouth of Gadsden Creek or pollutants in the tidal wetlands themselves.

At a minimum, more research must be done on the state of Gadsden Creek to determine just how extensive a mitigation effort would be. And based on that research, we ought to be able to find out the actual costs and feasibility of restoration.

Given that information, it may well turn out that the money and effort spent revitalizing such an abused and neglected creek might simply be better spent in some other way.

We might discover that the creek is so polluted that capping it has long been necessary to prevent toxic waste from seeping into the Ashley River.

We might find out that a creative restoration could serve as a flood prevention mechanism, community amenity and wildlife habitat.

Gadsden Creek’s future should be decided based on a rational assessment of the costs and benefits involved. But it’s awfully hard to do the math without half of the equation.

As long as tides are allowed to flow into the neighborhood, this flooding will continue. Gadsden Creek is a major cause of the problem, not the solution.

Those opposed to the nonprofit WestEdge Foundation partially filling Gadsden Creek for further development showed up at a state public hearing en masse, but those who support the project said the opposition doesn't live in the area and experience the sunny day flooding on their neighborhood streets and parks.