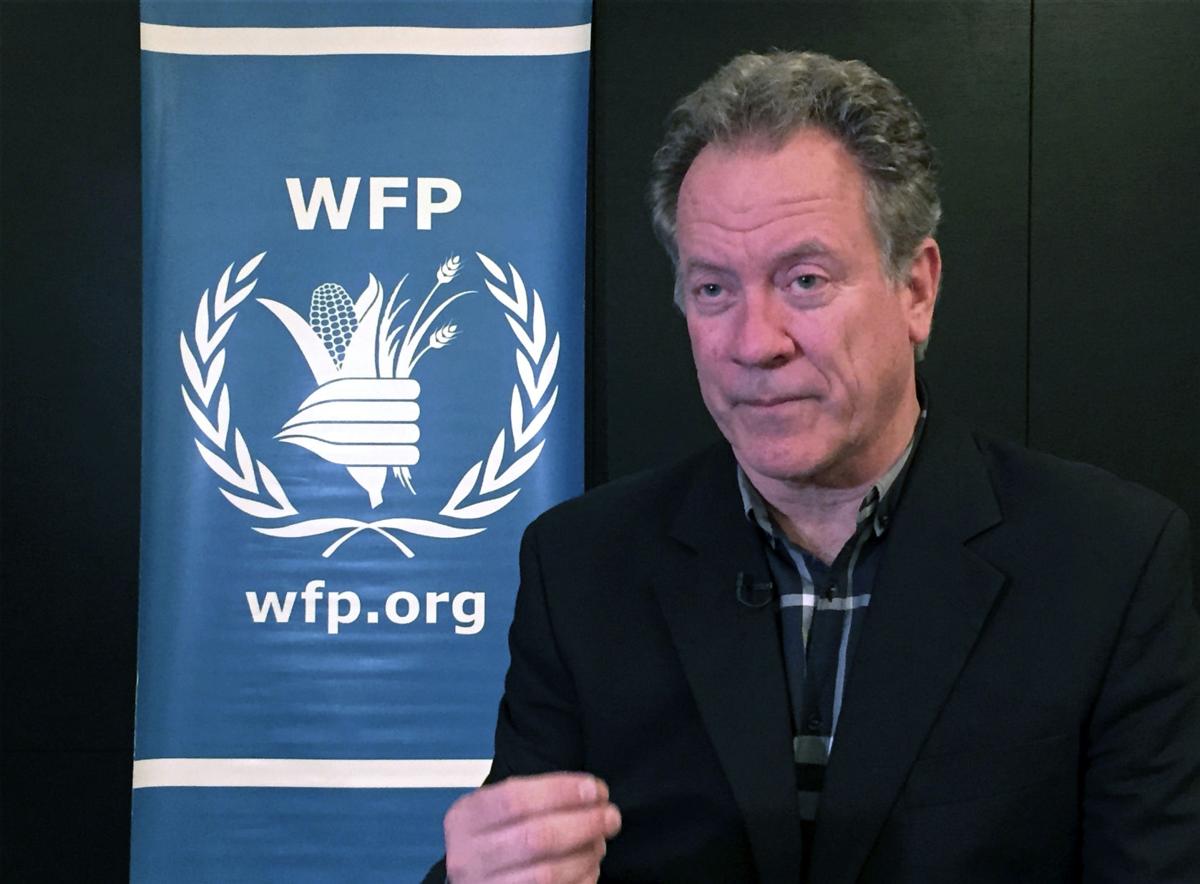 David Beasley, executive director of the World Food Programme, which was awarded the Nobel Peace Prize on Friday. AP/file

Somali porters offload sacks of a maize shipment from the World Food Program, intended for distribution to the many thousands of needy internally displaced persons in the country, into a warehouse in the seaport of Mogadishu, Somalia, on Wednesday, May 19, 2010. The World Food Program on Friday, Oct. 9, 2020 won the 2020 Nobel Peace Prize for its efforts to combat hunger and food insecurity around the globe. File/Mohamed Sheikh Nor/AP

David Beasley technically did not win the Nobel Peace Prize on Friday. It was awarded to the World Food Program, the United Nations agency based in Rome that South Carolina's former governor directs. And it's a tribute to him that he immediately shared credit.

"This is the first time in my life I’ve been speechless," Mr. Beasley told The New York Times, adding that the honor was due to his staff’s hard work. "They’re out there in the most difficult, complex places in the world — whether it's war, conflict, climate extremes, it doesn’t matter. They’re out there, and they deserve this award."

The agency's work is more urgent than ever as COVID-19 circles the globe, undermining economies and traditional supply routes. The agency has air-dropped food into South Sudan and Syria and found other delivery methods after commercial flights remained grounded. Last year, it helped feed almost 100 million people in nearly 90 nations.

In announcing the award, Berit Reiss-Andersen, chair of the Norwegian Nobel Committee, said the prize committee "wishes to turn the eyes of the world to the millions of people who suffer from or face the threat of hunger.… The World Food Program plays a key role in multilateral cooperation on making food security an instrument of peace.”

Mr. Beasley, who was nominated for the post by President Donald Trump in 2017, also has helped raise the organization's profile, particularly in America.

The Nobel Committee hopes its award will encourage governments to support the program and related aid groups, particularly in conflict-ridden regions. Its budget is almost $6.4 billion in cash and donated goods; more than a third comes from the United States. The World Food Program estimates there may be 690 million people worldwide suffering some form of hunger.

Mr. Beasley, who served as South Carolina's governor from 1995 through 1999, overcame his own battle with COVID-19 in March and has raised awareness about the pandemic's challenges. "We cannot pit COVID versus starvation," he said in April. "We've got to work these two issues together strategically. We've got to keep the economies rolling. We've got to keep the supply chain moving the best we possible can."

Politicians who rise to a high office such as governor often are remembered mostly for their accomplishments in office, but Mr. Beasley's work during the past four years shows that their greatest contributions sometimes come long after that.

In his new position, Mr. Beasley has found more than a job but a calling that blends his executive abilities with his deep faith. Last year, Mr. Beasley told The Post and Courier's Schuyler Kropf about a recent trip to Yemen, where he was negotiating access for food deliveries in a war zone. Mr. Beasley visited a hospital and saw children "waste away before my very own eyes." After being told the hospital can handle only about 20 of the 50 starving children who arrive each day, Mr. Beasley recalled it as "one of the first times in my life I had to walk out of the room, around the corner and just literally weep."

Most of us in South Carolina are blessed with knowing where our next meal will come from. As we remember the hunger and tragedy so common in the world's poorest and most conflict-ridden regions, it should give us a sense of pride to know one of our own is leading the effort to help.