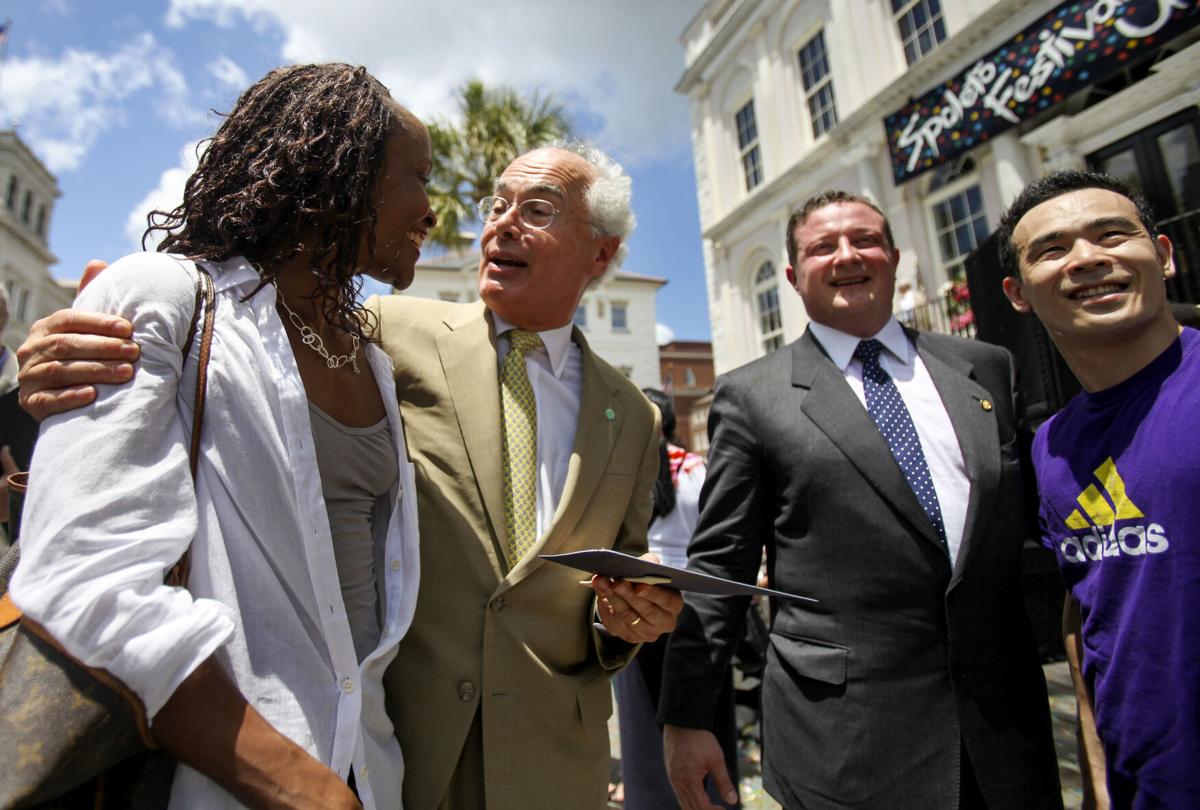 Renee Robinson (from left), a dancer with the Alvin Ailey American Dance Theater, is greeted by Spoleto General Director Nigel Redden along with the mayor of Spoleto Italy, Daniele Benedetti, and Kanji Segawa, fellow dancer with Alvin Ailey, during the opening ceremonies for the Spoleto Festival on May 25, 2012. File/Grace Beahm Alford/Staff 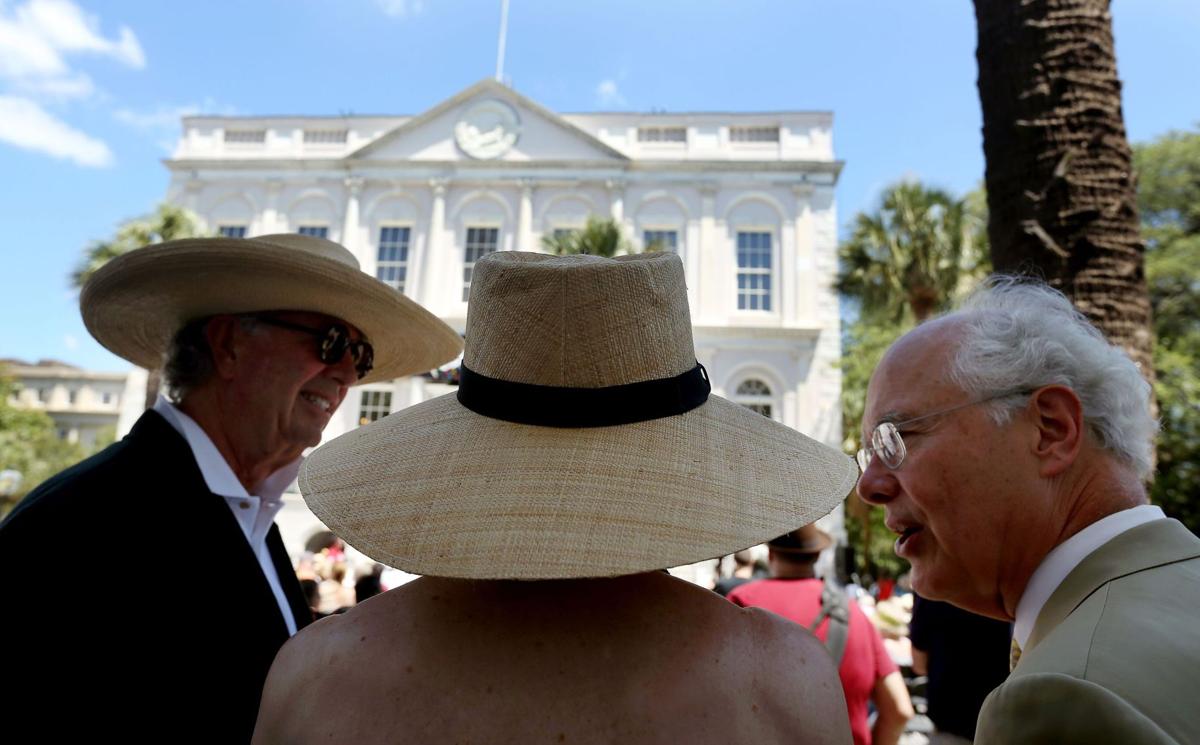 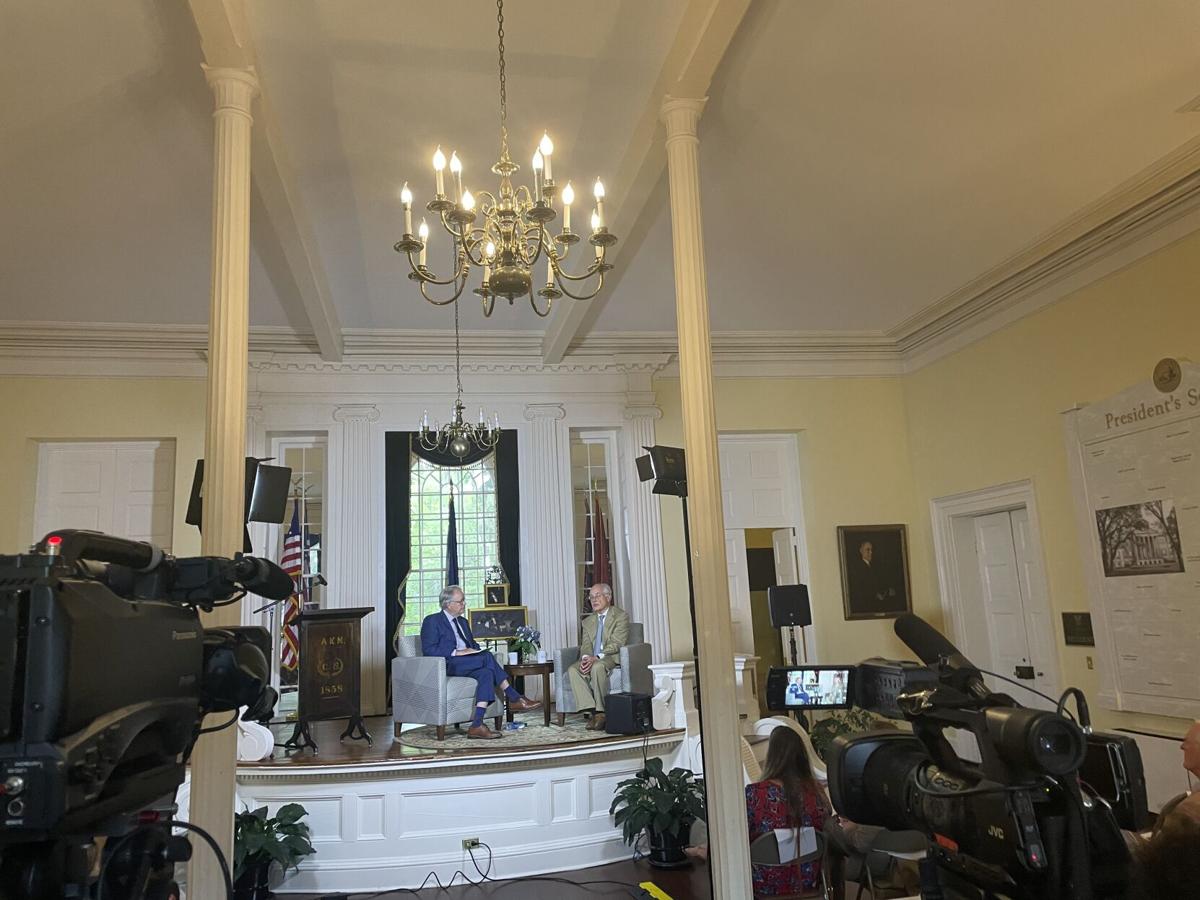 Renee Robinson (from left), a dancer with the Alvin Ailey American Dance Theater, is greeted by Spoleto General Director Nigel Redden along with the mayor of Spoleto Italy, Daniele Benedetti, and Kanji Segawa, fellow dancer with Alvin Ailey, during the opening ceremonies for the Spoleto Festival on May 25, 2012. File/Grace Beahm Alford/Staff

Of all those who have helped Spoleto Festival USA become the preeminent fixture on Charleston’s arts and cultural calendar, few have loomed as large as Nigel Redden, its longtime general director who worked with the festival relatively early on, left after a blowup over an innovative artistic offering and eventually returned to stabilize the festival and help it become the institution it is today.

Indeed, Mr. Redden’s more than 35-year involvement has been a gift to the city in so many ways, and we were saddened by his announcement last year that he plans to retire in October. But we are pleased that artists, patrons and other supporters will have a chance to thank him and wish him well during the ongoing festival, which runs through June 13.

Many talented candidates are reportedly (and understandably) seeking to fill his shoes, but they will need much more than Mr. Redden’s endearing British accent and subtle sense of humor. The position demands an unusual mixture of passion and understanding for fine performing arts, including an ability to identify and nurture up-and-coming performers, and the necessary executive skills for keeping the festival financially and functionally strong. His most recent tenure began as Spoleto grappled with significant debt; he’s leaving it in the black with a $16 million endowment and other assets.

If there’s any downside to Mr. Redden’s tenure, it’s that those of us who value Spoleto might take for granted its significant recent success and not do enough to continue to support it in years to come. Because while Spoleto may seem permanent, this 17-day-long performing arts festival must be rethought, reprogrammed and rejuvenated every season to uphold its reputation for excellence while also presenting something quite new.

During a recent public conservation with Charleston Mayor John Tecklenburg, Mr. Redden indicated his biggest challenge was how to help the festival rise from the ashes of its prior year. And that involves taking risks by hosting certain avant-garde performances. “We leave people wondering sometimes what the heck that was,” Mr. Redden told the mayor less than half-jokingly. Indeed, the goal of keeping the festival fresh factored into his decision to retire now.

Mr. Redden has shown few signs of slowing down on his way out the door. He is leaving the festival with a landmark artistic offering for 2022: “Omar,” an opera by MacArthur Fellow and Grammy Award-winner Rhiannon Giddens. It’s based on the remarkable true story of Omar ibn Said, an African and Muslim man who was enslaved and sent to Charleston. Reporter Jennifer Berry Hawes and photographer Gavin McIntyre told the story in depth in a special section last Sunday, and next year’s world premiere will be an artistic achievement of international significance.

“Omar” is one of many examples of how Spoleto has interwoven its host city into its identity. Mr. Redden said he believes Charleston is the best city in the nation to host this festival, and under his leadership, the city and festival worked together to rehabilitate some of its most significant venues, including The Dock Street Theatre, Memminger Auditorium (now known as Festival Hall), the Sottile Theatre and the Charleston Gaillard Center. But that’s not the festival’s only lasting impact on the landscape. Many may not realize it, but David Hammonds’ House of the Future at America and Reid streets survives, as does Ronald Jones’ work on the ground floor vestibule at Mother Emanuel Church. And Spoleto renovated one of the city’s most significant neoclassical residences for its offices at 14 George St.

During his conversation with Mayor Tecklenburg, Mr. Redden lobbed out a few new challenges and opportunities, including the idea of creating a significant memorial for 36 African Americans whose remains were reinterred off George Street, where they had been uncovered accidentally a few years before during the Gaillard’s makeover.

He also suggested reknitting ties with Spoleto Italy’s Festival dei Due Mondi (Festival of Two Worlds), the original festival created with American patronage that in turn spawned its American counterpart, Charleston’s Spoleto Festival USA. For 15 years, the festivals were twins, but that ended in the 1990s when composer Gian Carlo Menotti, who founded both, clashed with leaders of our festival. He walked away from Charleston’s festival years before his death in 2007.

Mr. Tecklenburg, who described Charleston as a “cultural backwater” when he grew up here as a boy, accurately called Mr. Redden’s tenure as “truly amazing,” adding, “Your leadership of Spoleto has led to a true transformation of the city over the last 40 years. It’s nothing short of remarkable.”

Mr. Redden’s answer acknowledged the compliment while also downplaying his own role — hardly surprising from someone who remained off stage while the festival’s artists grabbed the spotlight: “Thank you, and thank you for putting up with me for so long. It’s been a pleasure.”

The pleasure has been ours, too.