An Upstate judge’s decision to call a second strike against efforts to invalidate the governor’s restaurant mask mandate is good news in South Carolina’s battle to control the spread of the coronavirus pandemic.

Although Ike’s Korner Grille technically gets one more time at bat — a hearing on the merits of the underlying lawsuit — S.C. Circuit Judge Mark Hayes II provided a thorough analysis of the legal arguments in his 38-page order declining to issue a preliminary injunction. A month after he refused to issue a temporary restraining order, the judge concluded without caveat that the restaurant “failed to show a likelihood of success on the merits.”

That means Gov. Henry McMaster’s requirement that restaurant staff wear masks and patrons wear them when they aren’t actively engaged in eating or drinking stands for now, and likely will as long as he wants it to. The lawsuit seeks to invalidate the restaurant requirement by invalidating the governor’s entire approach to COVID-19 and even the Legislature’s authority to let the governor do anything about an emergency, so more significantly, it means the governor’s rolling emergency orders stand.

No thinking person could have taken seriously Ike’s suggestion that the Legislature unconstitutionally delegated authority when it granted governors emergency powers during … emergencies. After all, the state constitution specifically authorizes it to do that.

Editorial: SC police have tools to shut down super-spreader events. It's time to use them.

But courts have not previously ruled on Mr. McMaster’s legal theory that he can issue rolling emergency orders to get around the state law that requires legislative authorization to extend a state of emergency beyond 15 days. So since October, the threat of a judge rejecting that theory had hung like a cloud — a small, not very ominous, cloud, but a cloud nonetheless — over the temporary law that allowed all registered voters to cast absentee ballots in this fall’s elections. Although unlikely, there always was an outside chance that a court could rule in favor of Ike’s, and that could have resulted in the votes of what turned out to be more than half of S.C. voters being invalidated.

Even with that threat removed now that the votes have been counted, the prospect of a governor being stripped of emergency powers mid-pandemic was daunting, with all sorts of spending, public safety and public health measures beyond mask requirements contingent on the continuing state of emergency. That prospect became more worrisome at midnight Nov. 8, when the 2020 legislative session officially concluded, meaning it would no longer be quick or easy for the Legislature to extend the state of emergency.

Editorial: McMaster move makes it tougher for SC restaurants to be responsible

That prospect has receded with Judge Hayes’ conclusion that “the General Assembly explicitly — or at the very least implicitly — consented to the executive orders” when it passed an absentee voting law that was contingent on a continuing state of emergency, in addition to a spending law that cited “the public health emergency associated with the 2019 Novel Coronavirus (COVID-19)” and declared that ”given the extraordinary challenges facing our State, our nation, and our world due to COVID-19, it is necessary to take emergency measures to combat the spread of this deadly virus.”

Of course, none of this means the question about the governor’s emergency powers is settled. As sound as Judge Hayes’ logic seems, it’s always possible that a hearing on the merits of the case could change his mind — or that the state Supreme Court could overturn his decisions.

Beyond that, it’s unclear if a law that requires a governor to read between the legal lines and issue a new order every 15 days to remain in technical compliance is the smartest approach to a pandemic, or other extended emergency.

We agree with Sen. Chip Campsen that the smarter approach would be a law that allows the Legislature to end a state of emergency if it believes the governor has overstated his emergency welcome rather than requiring the governor to get legislative approval to extend it beyond 15 days. Once it’s clear that an effort to flip the law around can’t be hijacked by renegade anti-maskers to somehow strip the governor of all his emergency powers, the 2021 Legislature will need to make that change.

Editorial: How powerful is an emergency governor? SC Legislature needs to clarify 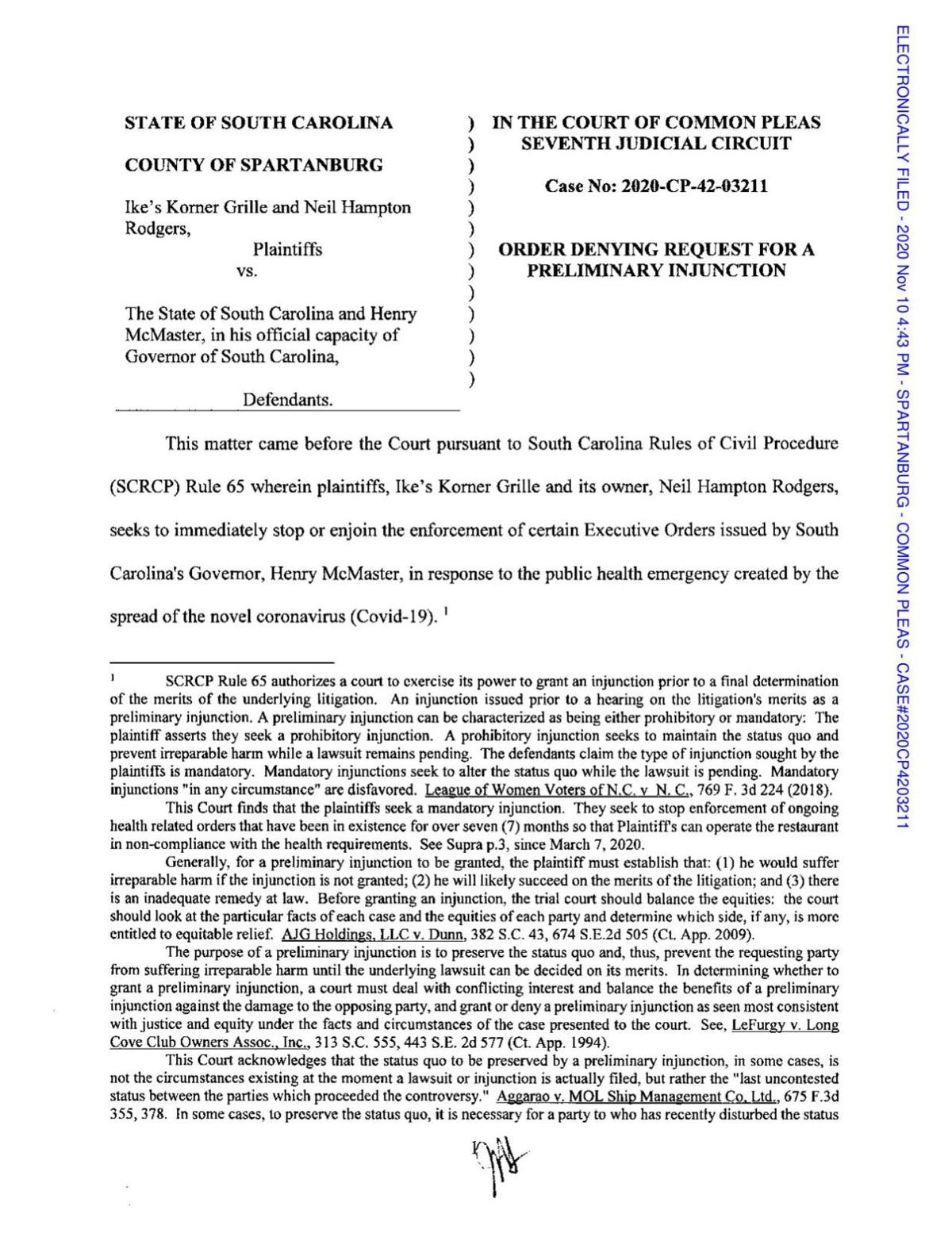