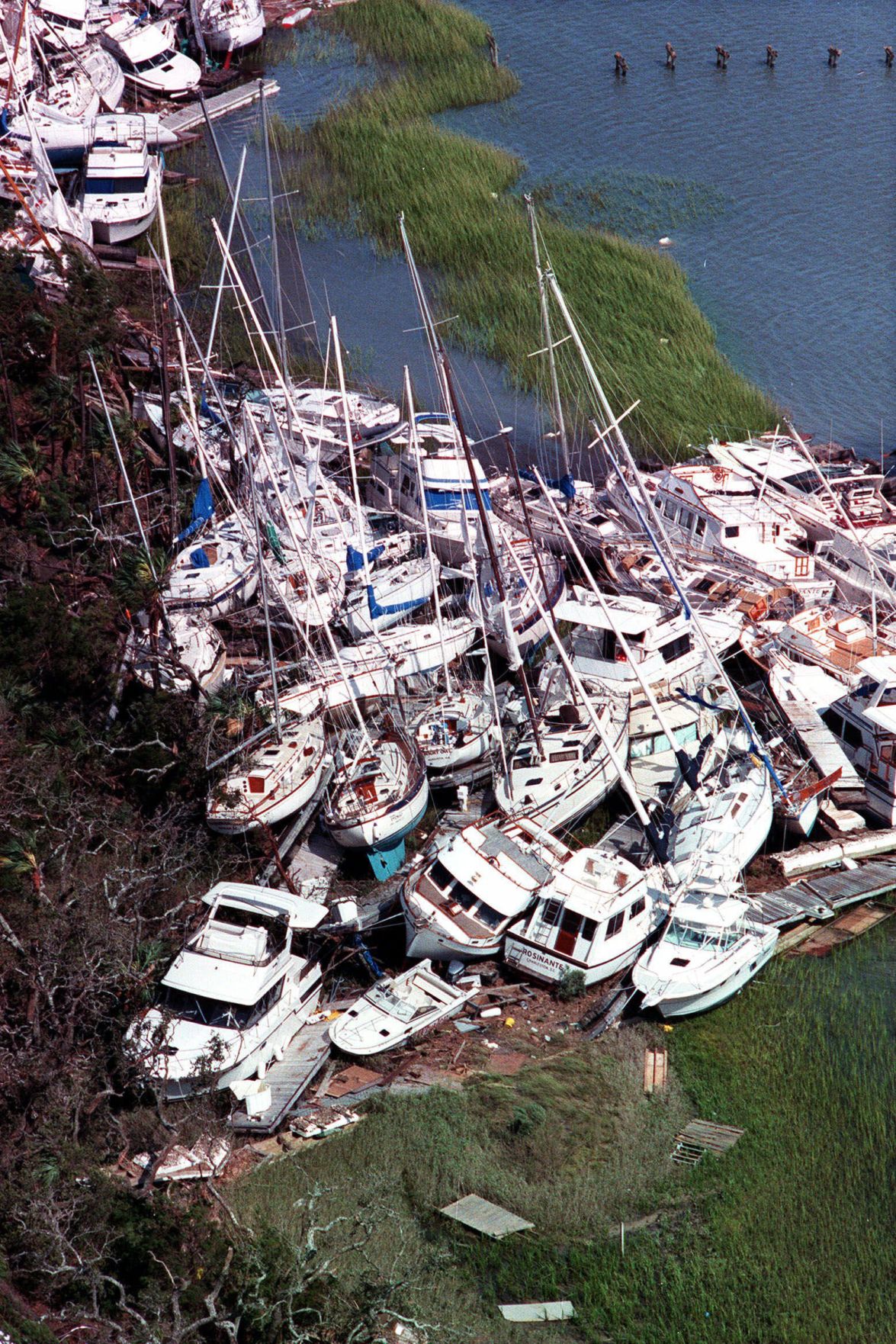 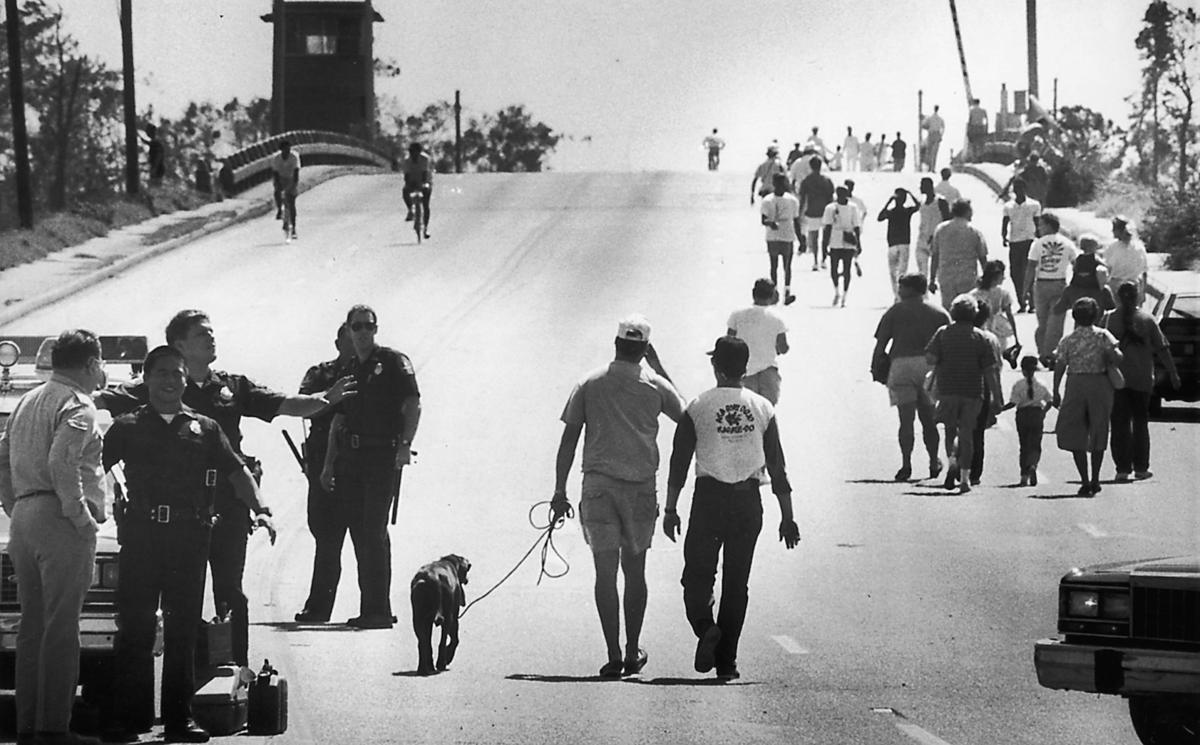 James Island residents walk to their homes after Hurricane Hugo passed on Sept. 22, 1989. They weren't allowed to drive onto the island.File/Stephanie Harvin/Staff 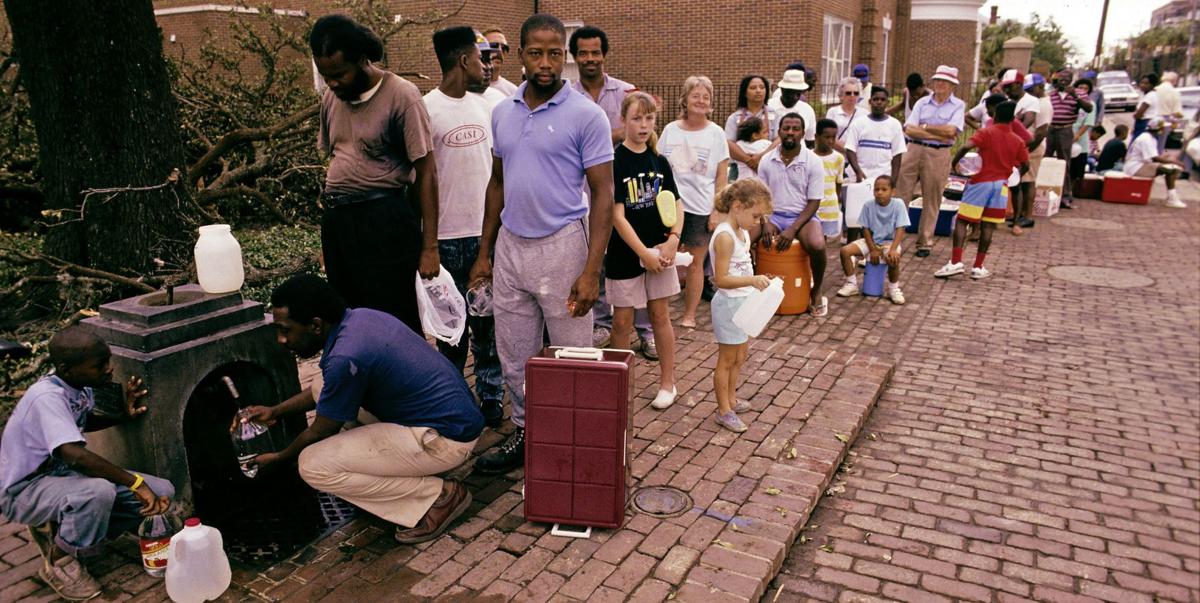 People lined up for water at an artesian well on Calhoun Street after Hurricane Hugo left them without running water. Wade Spees/Staff 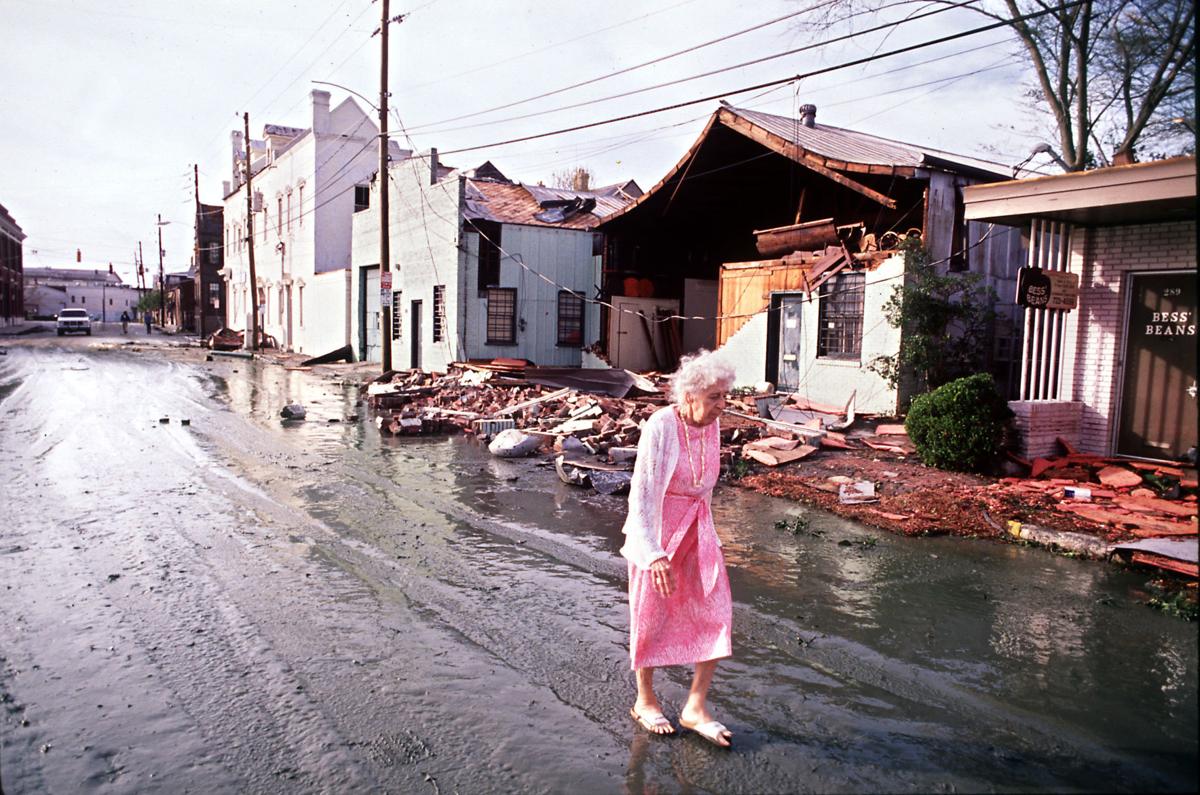 Those frightening hours taught us the critical importance of storm preparations and heeding government warnings to evacuate. Those lessons remain just as important today, as a letter writer who lived through Hugo and its long aftermath reminded us this week.

As the electricity flickered and eventually went out that night, those who decided to ride out the storm heard tree after tree snap and fall. Some huddled together as roofs peeled away, exposing them and everything they owned to the ferocious storm. Others moved upstairs or in some cases even into attics as Hugo pushed the Atlantic into their houses.

Along the immediate coast, we learned about storm surge and flooding. There were the houses shifted off their foundations in McClellanville, which helped spark an insurance coverage debate between flooding and wind-driven water. There were the scrapes on 10-foot ceilings from furniture bobbing up and down in the floodwaters.

There are stories of terror and heroism that have stayed with us for three decades. There were the people sheltered at Lincoln High School in McClellanville who climbed on tables and held their babies over their heads to keep them from the rising flood waters. Two hospital workers hand-cranked an emergency generator outside Roper Hospital to keep electricity flowing to the ICU. A North Charleston woman was rescued by neighbors after a communications tower split her house in two.

But there was more to Hugo than the fright, the surreal post-storm landscape, the financial hardship. The massive storm taught us to appreciate simple things like clean clothes and a hot meal. Or being able to take a shower, flush a toilet, watch TV or relax in air conditioning. We learned to listen out for which stores had fresh shipments of ice and water. Generators became must-have items.

And in a pre-smartphone world, there was great appreciation for the phone company, which kept land lines working when pretty much everything else did not.

We also got to know our neighbors better, or in a different way. We shared resources, including the food that was thawing out in our freezers. We cooked together on propane stoves or gas grills. We helped our friends cut up downed trees, keeping an eye out for those who had just bought their first chainsaw.

We stopped at busy intersections that no longer had working traffic lights and calmly took turns driving through them. It might not seem like much today, but that simple act of kindness to strangers who were enduring the same hardships is an enduring memory for many people.

It was a kinship born of a shared experience.

To be sure, Hugo left its scars, some of them unseen. How many people who lived through the terror in those dark hours later spent months inexplicably rising from bed whenever the wind would pick up, and just staring out the window?

As South Carolina residents, we should offer a helping hand to our neighbors in need. We should ask our elected officials and nonprofit organizations and community leaders to lend assistance.

And Americans did what Americans do after a tragedy, sending help to the Charleston area from all over. For that, we are forever grateful.

Power companies from across the South marched in with equipment and workers to help us get reconnected. Cities sent public safety workers to help. Charleston made a habit of returning the favor for years after Hugo, sending contingents of police officers and others to help out cities reeling from their own natural disasters.

Mayor Joe Riley showed what it meant to be a leader during a crisis. The Federal Emergency Management Agency — or “bureaucratic jackasses,” as Sen. Fritz Hollings described the agency — showed how a lumbering federal agency can fail a community in need.

And in the aftermath, the Charleston area and its citizens showed their resiliency, pulling themselves back together as they have after war, fires, earthquakes and previous hurricanes.

Way back in 1989, a group of us who were interested in coastal management watched with fascination as Hurricane Hugo approached the shores of …

The storm that ripped so many lives apart also helped spark a building boom with a new kind of flood — insurance money. Many built back better than before. Home values rose. Lives eventually returned to normal.

For many, Hurricane Hugo remains a defining event, a dividing line that marks a before and an after. Today, the city and surrounding areas are bigger, stronger and more prosperous, but we remain vulnerable.

The threat of climate change and sea rise and consecutive years of strong storms drive home the urgent need to protect the Charleston area and make it more sustainable. We must pull together again — before another Hugo strikes.

Scoppe: Before, during and after Hurricane Dorian, reporters had your back

Hurricane Hugo slammed into the South Carolina coast as a Category 4 hurricane overnight on Sept. 21, 1989.