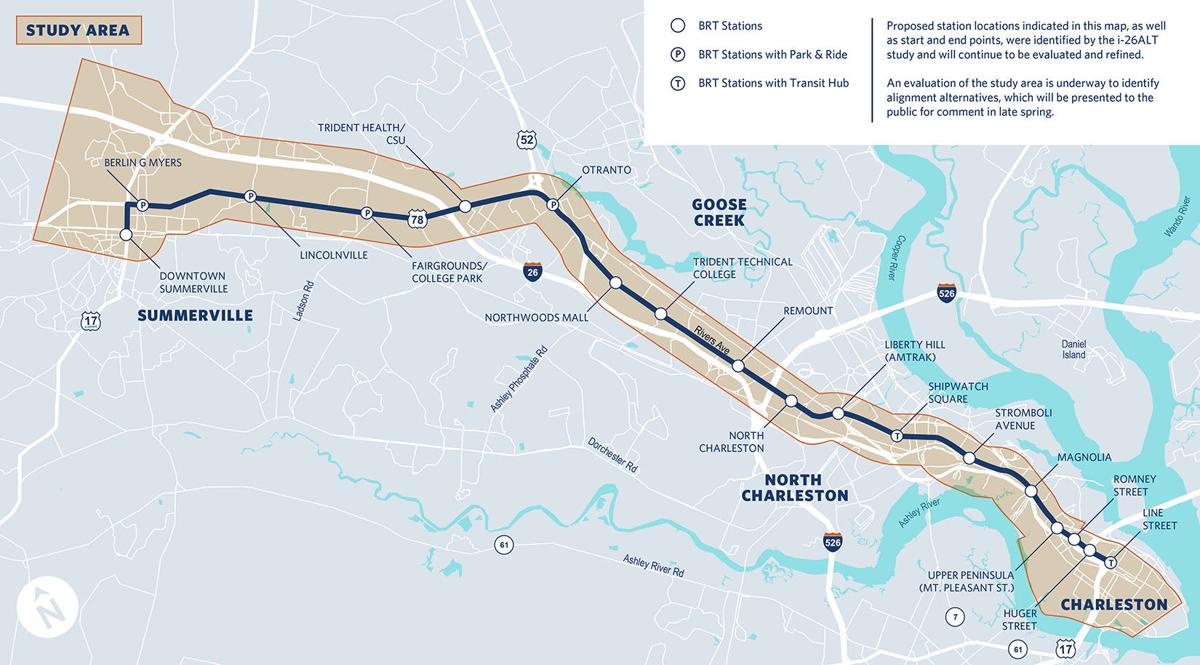 This map roughly shows the planned route for a bus rapid transit system connecting Summerville and downtown Charleston. The shaded area is being studied to see how transit will affect residents and businesses both present and future.

This chart shows a partial list of the steps required of transit projects applying for a federal grant program. From start to finish, the process can take over a decade.

This map roughly shows the planned route for a bus rapid transit system connecting Summerville and downtown Charleston. The shaded area is being studied to see how transit will affect residents and businesses both present and future.

This chart shows a partial list of the steps required of transit projects applying for a federal grant program. From start to finish, the process can take over a decade.

The process for earning federal approval for mass transit projects takes far too long and is unnecessarily grueling, and it’s much more competitive than most road-building efforts despite the fact that dozens of cities, including Charleston, are desperate to add better transit systems to their transportation options.

With few exceptions, American cities have built overlarge and overly costly highway networks that have resulted in crushing gridlock, tax hikes, public health problems and a variety of other issues that stem from an unnecessarily car-dependent development pattern.

Catching up from so many years of overlooking transit investments will be challenging but necessary in making cities such as Charleston more livable and sustainable moving forward.

But a permitting process that can stretch a decade or longer and fierce competition for limited grant money leave cities dreaming of new transit options for years only to sometimes have their hopes dashed.

The Charleston region, fortunately, has plenty of public officials willing to keep up the pressure and fight for a bus rapid transit system that would connect Summerville and downtown Charleston.

Charleston County voters also showed their support by approving a 2016 half-cent sales tax that included well over $200 million in local funds for that project.

Rather than a traditional bus line, the planned Lowcountry Rapid Transit system would run mostly in a dedicated bus lane. It will have about 18 stops along a more than 20-mile route and will shuttle passengers at speeds comparable to a personal car.

It’s a transit system that might actually persuade people to leave their cars at home, which would be a big boost for quality of life in the region. It’s something we’ve needed for decades.

We shouldn’t have to wait years and years to build it.

Congress needs to shift federal transportation funding priorities much more heavily toward transit projects and streamline approval and permitting processes so that desperately needed improvements can move forward in a reasonable time frame.

Ideally, lawmakers would shift much more authority back to local governments, which have a far more detailed knowledge of the unique needs of their communities.

Until then, however, it’s vitally important that the Charleston area public stay as involved as possible in supporting the Lowcountry Rapid Transit system, which is being overseen by the Berkeley-Charleston-Dorchester Council of Governments.

Lowcountry Rapid Transit is entering a federally mandated environmental and community review process, and residents are encouraged to read up on the proposed design and offer comments.

There are several options to do so, including a virtual meeting at lowcountryrapidtransit.com or upcoming meetings at 11 a.m. June 20 at Northwoods Mall and at 3:30 p.m. June 25 at the International Longshoreman’s Association.

Bus rapid transit is moving forward in the Charleston area, which is something worth celebrating and following closely.

It’s also a chance to put pressure on federal officials to make it easier for cities to address their longstanding transportation needs.