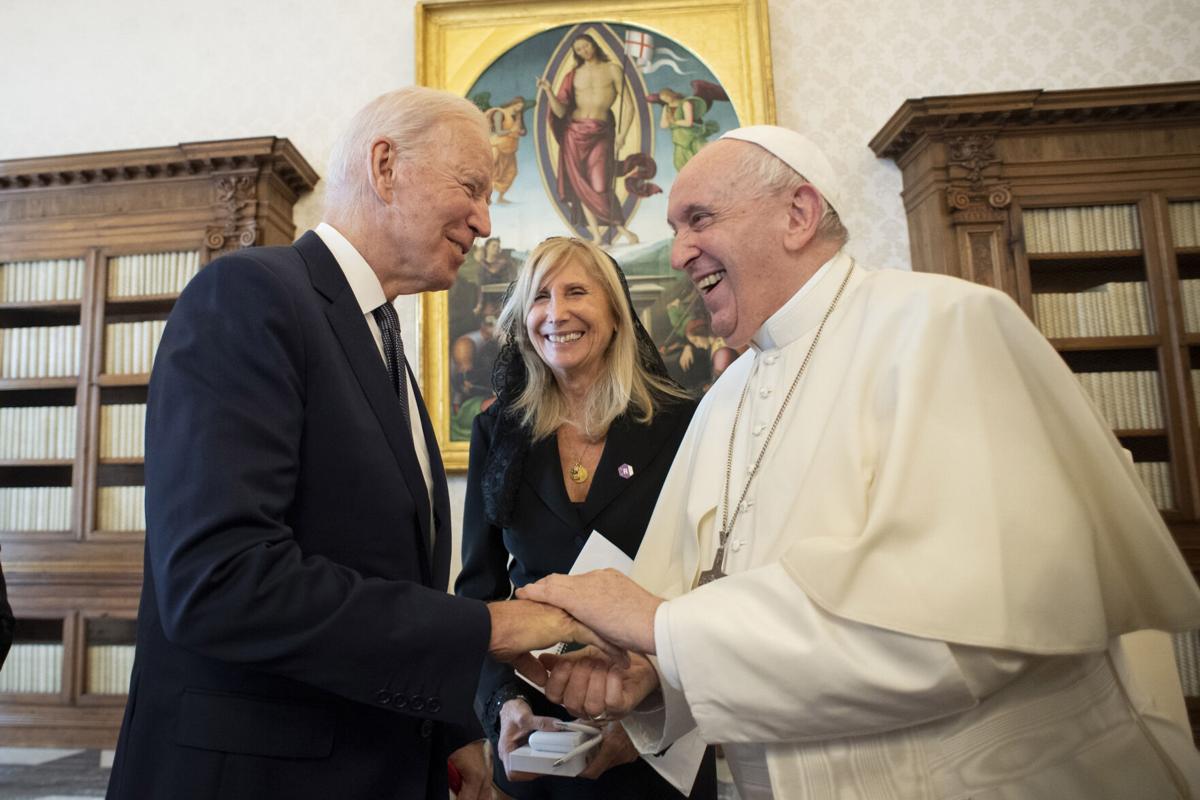 President Joe Biden shakes hands with Pope Francis as they meet Oct. 29 at the Vatican. Vatican Media via AP 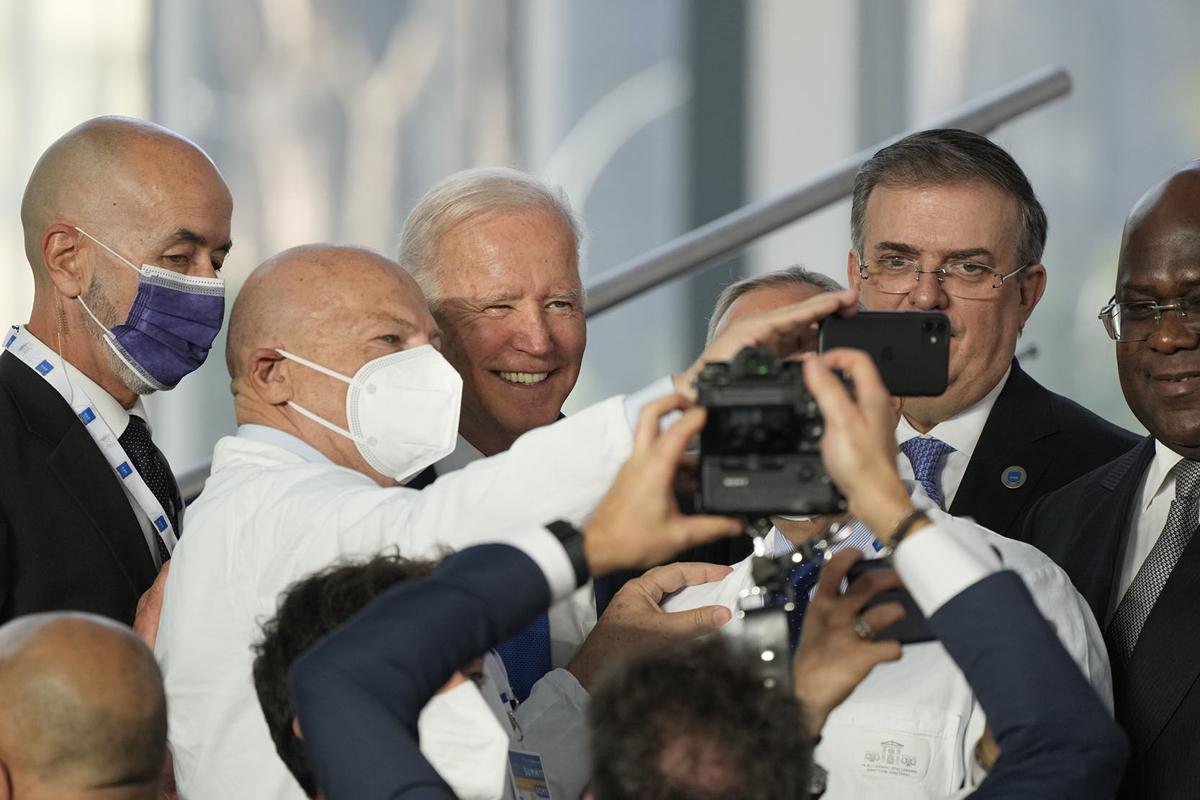 U.S. President Joe Biden poses for a selfie with medical personnel and other world leaders during a group photo at the La Nuvola conference center for the G20 summit in Rome, on Oct. 30. The two-day Group of 20 summit is the first in-person gathering of leaders of the world's biggest economies since the COVID-19 pandemic started. Gregorio Borgia/AP 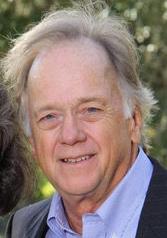 President Joe Biden shakes hands with Pope Francis as they meet Oct. 29 at the Vatican. Vatican Media via AP

U.S. President Joe Biden poses for a selfie with medical personnel and other world leaders during a group photo at the La Nuvola conference center for the G20 summit in Rome, on Oct. 30. The two-day Group of 20 summit is the first in-person gathering of leaders of the world's biggest economies since the COVID-19 pandemic started. Gregorio Borgia/AP

ROME — Two thousand years ago on a bend in the River Tiber, a Roman poet first described this place as “The Eternal City,” and indeed it has been around for what seems like forever. But during the last weekend in October, it was the “Infernal City.”

Politza blue lights flashed, and sirens blared almost everywhere in a three-day devil of a traffic jam. It sounded as if the barbarians, bellowing their blood-curdling battle horns, had breached the gates again in this crowded city of almost 3 million. The much ballyhooed G20 economic summit had come to town.

Representatives of 20-odd nations gathered to focus on the cost of cooling down global warming. But all it produced was noise, confusion, pollution and a lot of hot air. Unfortunately, the delegates, their staffs, spouses and friends seized the streets in flagged convoys of various lengths. Their limousines delivered them to wherever they met, slept, dined, drank or needed a little something at the corner farmicia for jet lag and hangovers. On Friday, Saturday and Sunday, they commandeered Rome’s notoriously narrow streets day and night in what appeared to be a failed Chinese fire drill, if you will.

Even China sent a delegation, although President Xi Jinping — whose nation burns more coal than anywhere else on the planet — stayed home. However, the most powerful political geezer in the world, President Joe Biden, was here to lead the charge in his big, black Cadillac dubbed “The Beast,” followed by 84 additional limos, SUVs, vans and an ambulance, none of which appeared to be hybrids. If you include the air travel, Biden dumped an estimated 2.2 million pounds of carbon on the rest of us.

On Friday, Biden, who is Roman Catholic, led the U.S. entourage on a crosstown pilgrimage to the Vatican for a 90-minute private audience with Pope Francis. It was only their fourth get-together since 2015.

U.S. reporters, a select few of whom rode in the Biden cavalcade, were distraught because they had to wait outside in the courtyard while the president and the vicar of the Apostolic See did their business. When a reporter asked why the Americans required 85 fuel-guzzling vehicles for the ride to the pope’s place, she was told that COVID-conscious Italian authorities allowed a maximum of only three people per vehicle, which the locals I interviewed dismissed. But all agreed that Biden’s colossal caravan was the most difficult to accommodate for the more than 2,000 Italian police and army officers assigned weekend duty in the city that Romulus built over twin brother Remus’ dead body more than 2,770 years ago.

Rome has had major traffic problems ever since for various reasons, especially construction of one replicated, monumental building atop another for almost three millennia. The narrow, zig-zagged streets were so rank and crowded with enslaved Celtic builders in 45 B.C. that Julius Caesar forbade any vehicular traffic in the city during daylight hours. Folks who arrived after dawn had to park their wagons outside the walls before entering on foot or by palanquins or other man-powered tote chairs.

A hundred years later, Emperor Nero took the heat for fiddling while burning down the royal neighborhood, before building his Greek-style Domus Aurea (Golden House), which improved the view from his hilltop portico. He probably torched a few Christians to illuminate his garden, but whether he played fast and loose with matches on everything else is a matter of still-smoldering debate.

Just the other day a pack of voracious wild hogs snarled traffic when they took to Rome’s streets, accosted a shopper in a grocery store parking lot and generally rooted through the trash, which seems to be everywhere it shouldn’t be in the Eternal City. An estimated 5,000 free-range cinghaili swine have taken up residence in spacious public parks. Authorities have set out traps but thus far have failed to conquer the beasts.

Meanwhile, Rome’s generally obstinate minicar/bus traffic was forced to a standstill everywhere the G-20 motorcades went. I opted not to chance the subway. The Italian language remains a mystery to me, especially in the dark, and I didn’t want to get lost in the catacombs.

John M. Burbage is a veteran journalist and cofounder of Evening Post Books who lives in downtown Charleston and on his farm in Hampton County.