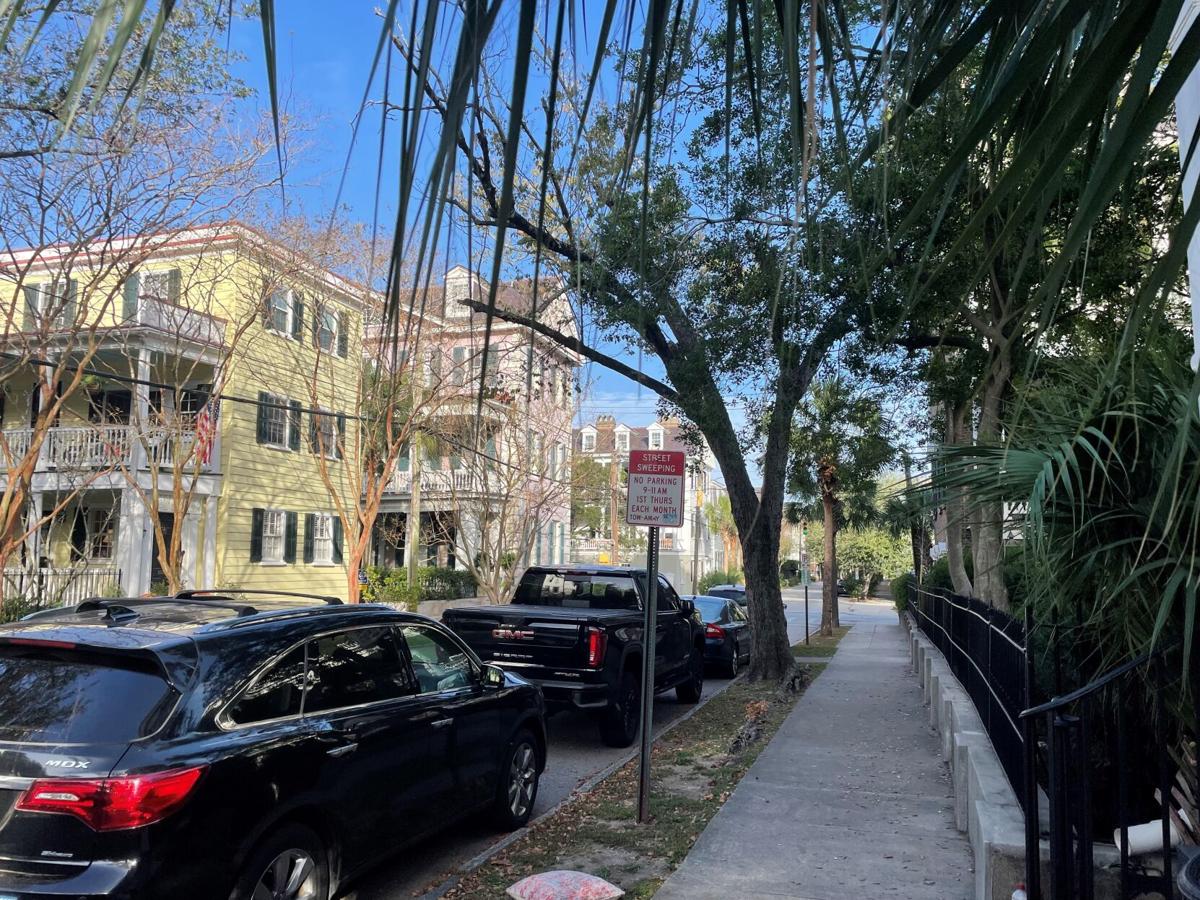 The same view along Ashley Avenue today shows little change to the buildings, but like most every other downtown street, plenty of parked cars. Robert Behre/Staff 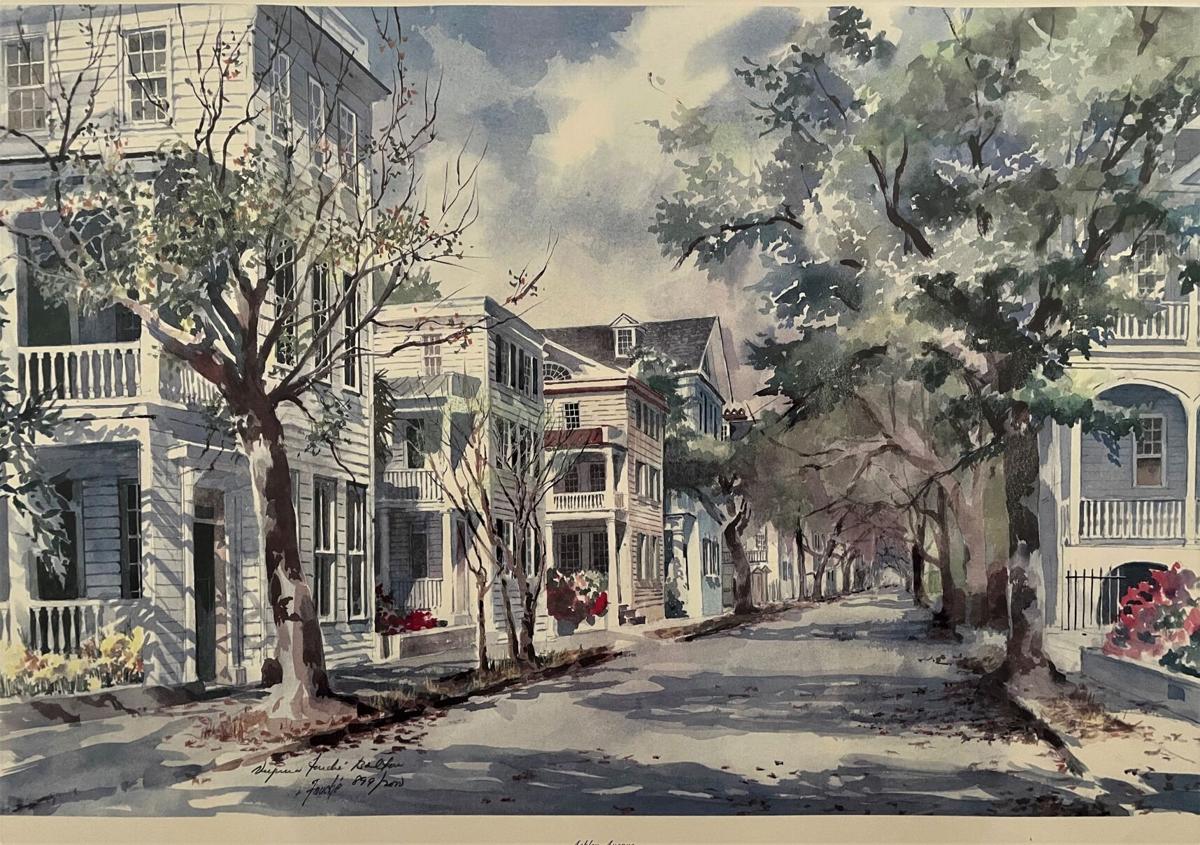 This depiction of Ashley Avenue just north of Colonial Lake is like many artistic streetscapes downtown inasmuch as it lacks any trace of parked cars.

The same view along Ashley Avenue today shows little change to the buildings, but like most every other downtown street, plenty of parked cars. Robert Behre/Staff

This depiction of Ashley Avenue just north of Colonial Lake is like many artistic streetscapes downtown inasmuch as it lacks any trace of parked cars.

One of the biggest litter problems in historic Charleston — and many other neighborhoods, for that matter — happens to be one that few discuss, probably because we know little can be done.

It's the blight of so many parked cars. Most of our historic streets are full of them, some on both sides. These vehicles, which seem to get bigger and taller, block views of fences, wrought iron gates, gardens and ground floors. The cars and trucks come and go, but most streets are at least partly full all day long. And all these stationary vehicles create a very different ambiance than existed when these buildings were built in the 19th century or even earlier.

I think about this whenever I visit family in Columbia and look at a certain picture on my mother-in-law's wall. It's a watercolor print — a sort of gauzy, halcyon depiction of several homes along Ashley Avenue. It's very recognizable as Charleston, and I happened to be correct when I guessed it depicted the portion of Ashley just north of Colonial Lake.

This street is hardly as iconic as East Bay's Rainbow Row or the bend in Church Street, but it's beautiful nonetheless. From what I can tell, the artist was faithful in depicting the architecture, but the street itself is shown as being a little narrower than it really is. And the homes are positioned slightly closer together than they appear in real life.

But by far the biggest difference between the picture and reality is simply the presence or absence of any parked cars.

As Charleston developed, it had practically no public parks (unlike Savannah's famous squares). That's partly because Charleston was laid out earlier as a walled city. But  it also might be because for centuries, the city's streets essentially doubled as parks: thoroughfares to be sure but also appealing public places (well, maybe except for mud and horse manure), framed by trees, homes and gardens.

Many probably would agree that all these parked cars are a visual blight, one far more noticeable than cigarette butts or gum wrappers or the other debris targeted by anti-litter efforts. The city occasionally removes a few on-street parking spaces from downtown streets here and there, not for aesthetic reasons but for practical considerations when converting a road from one-way to two-way traffic. Occasionally, a few are claimed as part of a larger civic improvement, such as raising the Low Battery or redoing Colonial Lake.

This problem is by no means limited to downtown Charleston. Many suburban neighborhoods have homes where people park in driveways or even in yards. While many of these homes were built with attached garages, these spaces often get filled up with all sorts of things other than cars: yard equipment, tools, holiday decorations, old furniture, ping-pong tables, you name it.

Savvy suburban developers have recognized the blight parked cars can create, so many newer neighborhoods have homeowner associations with strict rules about where owners and their guests can park their cars. It's certainly debatable what's the greater nuisance: the unappealing view of parked cars or the hassle of being fined $100 by an aggressive HOA.

South Carolina ranks in the middle of the pack as far as car ownership per capita — well above states such as New York whose cities have subways and other robust public transportation but well below rural western states where you absolutely need a car to get anywhere. (And even the grandest residential streets in Manhattan, Washington and the like are often lined with parked cars).

So these days, we experience our historic streetscapes in their original car-less, aesthetically optimal state only whenever someone's filming a historical drama or perhaps during a major hurricane evacuation. And in pictures where the artist has license to erase them.

Most of us understand why there's so little interest in trying to end this visual blight: We know we're the litterbugs.

Scoppe: Forget SC Supreme Court. These are the judges legislators need to worry about.

The political class in Columbia is all atwitter about Supreme Court justices and whether the nominee up for election Wednesday was properly vetted: Did lawmakers ask the right questions about judicial philosophy? Did lawmakers on the nominating commission pick the right candidates? Are these… Read moreScoppe: Forget SC Supreme Court. These are the judges legislators need to worry about.

If you follo… Read moreCommentary: Why would Republicans rule out Social Security and Medicare reform?

The city of … Read moreCommentary: North Charleston should seize an opportunity it might not see again