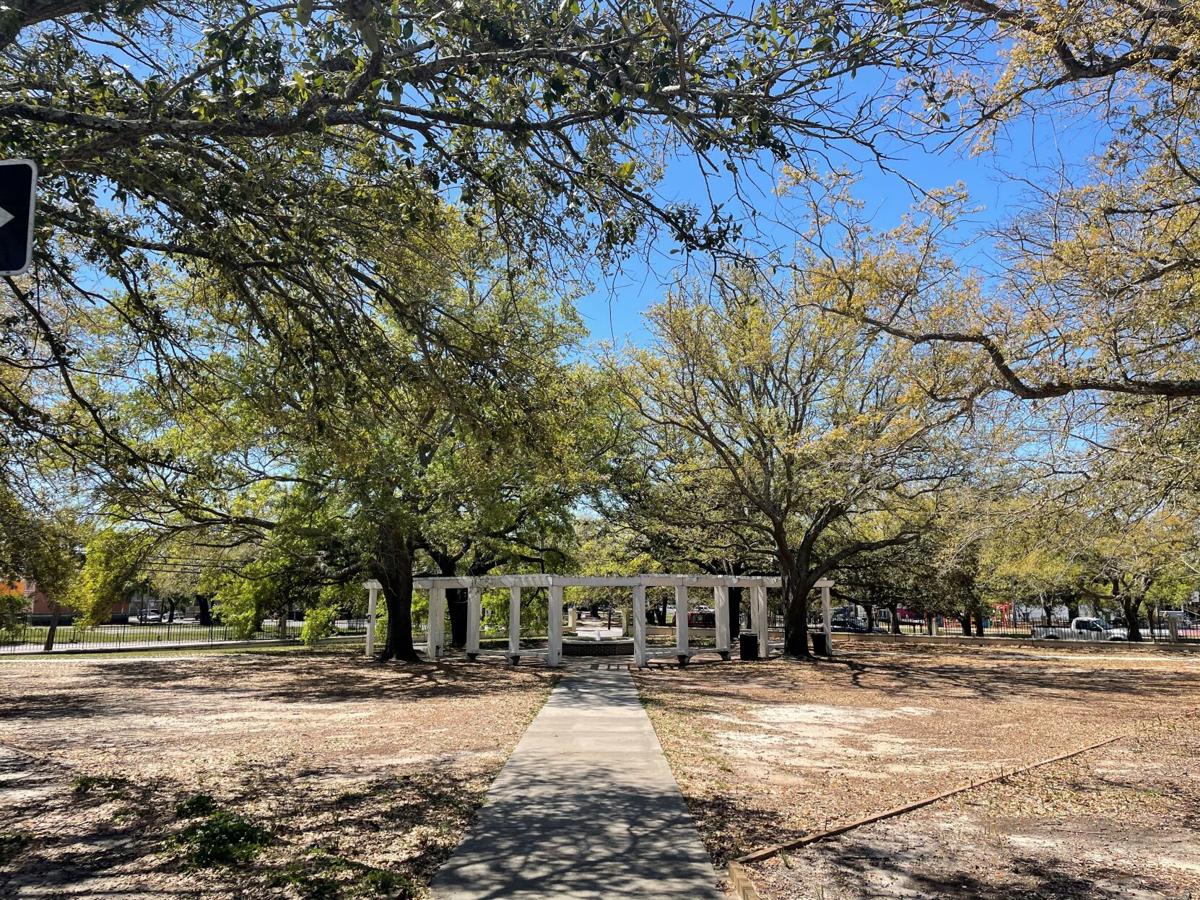 The little-used northeastern quadrant of Hampstead Square mainly marks the entrance to Trident Technical College's Palmer campus. It does contain a small fountain and a trellis feature. Robert Behre/Staff 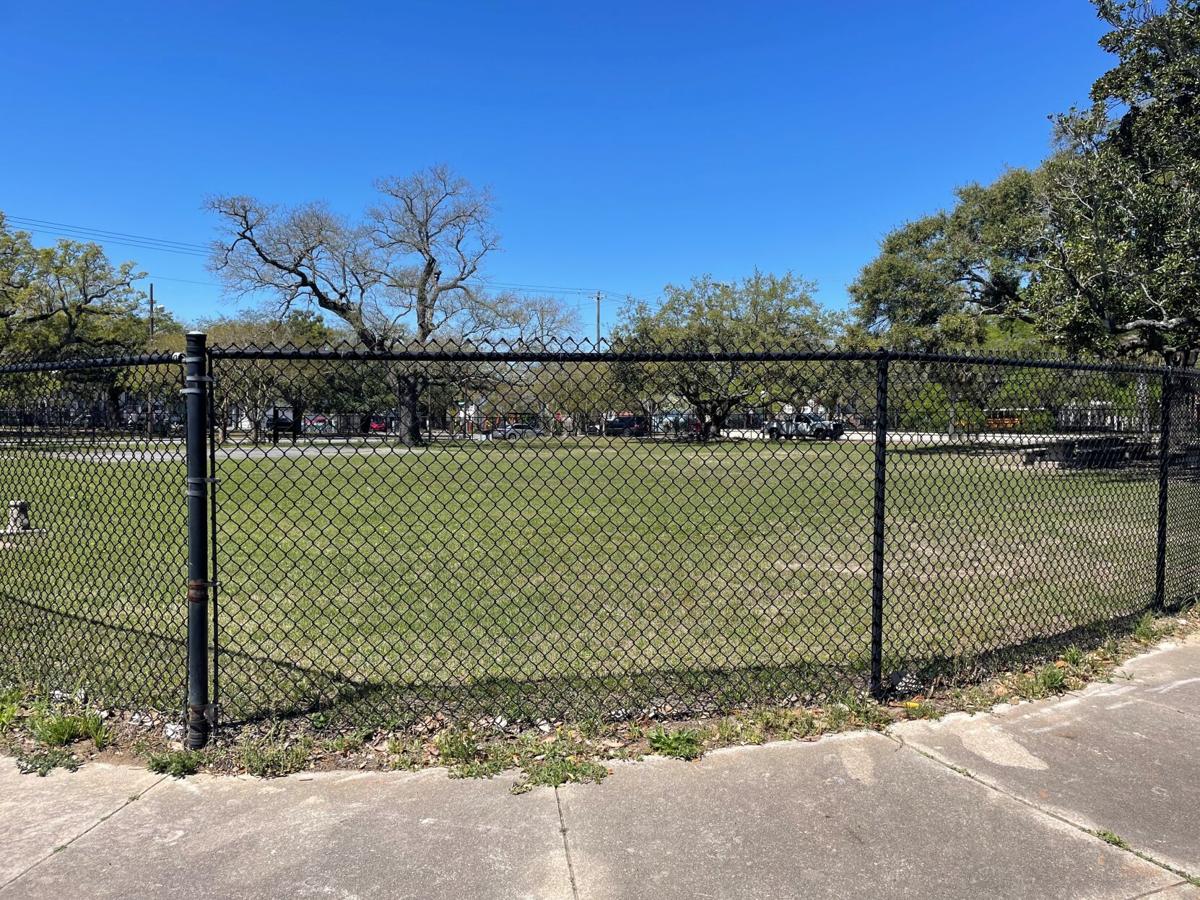 The southeastern portion of Hampstead Square is currently off limits to the public and surrounded by a chain link fence. The property previously was used by students at the now closed Fraser Elementary School. Robert Behre/Staff

The little-used northeastern quadrant of Hampstead Square mainly marks the entrance to Trident Technical College's Palmer campus. It does contain a small fountain and a trellis feature. Robert Behre/Staff

The southeastern portion of Hampstead Square is currently off limits to the public and surrounded by a chain link fence. The property previously was used by students at the now closed Fraser Elementary School. Robert Behre/Staff

In 1769, before the United States was a country or Charleston was incorporated, before Marion Square was a parade ground and long before White Point Garden or any other city park existed, the village of Hampstead was laid out just north of the colonial city, with a large public square in its heart, at America and Columbus streets.

The new village, named after an affluent London suburb, was advertised in 1772 as “well adapted for a retreat either for a gentleman or merchant.” But during the Revolutionary War just a few years later, its first buildings were torched by Americans for defensive reasons, then ransacked by British forces.

That village eventually rebuilt, but unlike Charleston, it never incorporated. And Charleston eventually annexed it around 1850; most of what survives from Hampstead are street names (honoring explorers and significant English figures) — and its public square.

Hampstead Square is arguably Charleston’s oldest dedicated park or greenspace. Its size, 450 feet long on each side (as long as 1½ football fields), also makes it one of city’s larger downtown parks.

The city and the square’s stakeholders, including the East Side neighborhood, Trident Technical College and the Charleston County School District, have a chance to reimagine what this space could be — and they should seize it by holding a charrette to give as many people as possible a voice in creating a new vision here. That ambitious planning work should start soon, before any smaller, potentially conflicting plans take root.

Most people don’t realize Hampstead Square was originally like the famous squares found in Savannah, ringed by roads. It wasn’t until the 20th century, after an east-west trolley line cut the square in two, that today’s Columbus Street was built through it. Likewise, America Street wasn’t cut through on its north-south axis until 1956, creating today’s four smaller squares. For starters, a charrette could explore whether those streets should be closed and the square’s original size restored. Why not think big?

What exists today is a hodgepodge that some might argue reflects the benign neglect of the neighborhood itself.

One of its two western squares features a playground, basketball court and rec building; the other is a passive park with a recently installed statue of blacksmith Philip Simmons.

The northeastern square includes a modest fountain and trellis and mostly serves to soften the entrance to Trident Tech’s Palmer Campus. The southeastern one is fenced off, but it soon could see the most change, as the county’s Early College High School expands across Columbus Street to the vacant Wilmot Fraser Elementary School.

Several groups have tried to draw more interest in the square before; the Preservation Society of Charleston put the square on its “Seven to Save” list a few years ago. Others also have seen the potential, but little has changed on the ground.

One stumbling block likely has been concern over gentrification. While Hampstead — known since the 1960s as the “East Side” — historically was a mix of races and classes, much like the city of Charleston itself, the neighborhood became largely African American during the late 20th century period of white flight.

No one wants to take steps that would displace residents, but is doing nothing a form of discrimination? Change will come. We shouldn’t want it to come too fast, but we should realize it can be good, too.

The Rev. Matthew Rivers, pastor of St. John’s Chapel about a block away from the square, acknowledged the neighborhood’s racial tensions, as largely white residents are moving in and some longtime black residents feel like they’re being pushed out.

But to him, that’s a reason to act, not wait.

“I think doing something dramatic is the blunt to gentrification. It does something that everyone can take advantage of,” he said. “This park is the very thing that all people in the neighborhood can get behind.”

That’s why the city should give people a thorough opportunity to think about — and speak out about — what changes they want to see there.