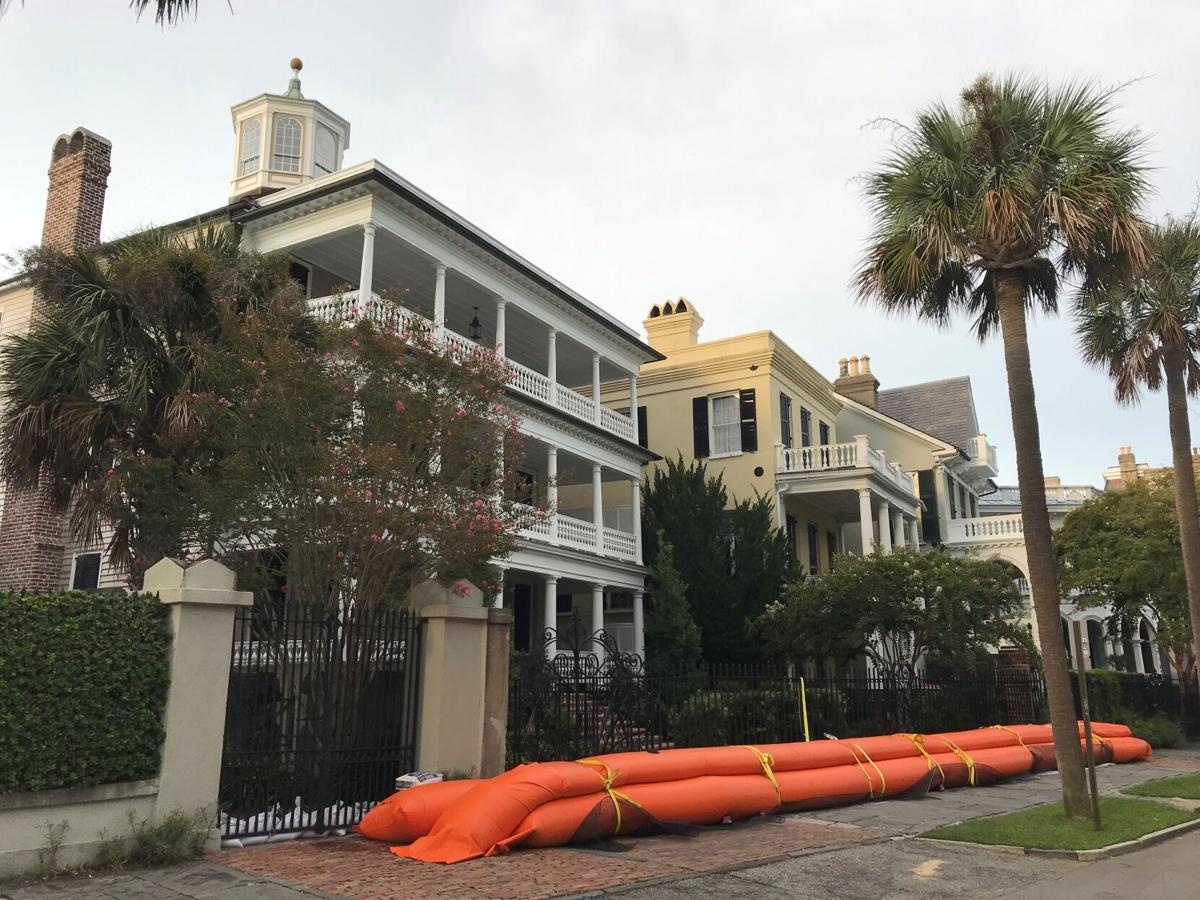 The threat of flooding has been increasingly on the minds of historic homeowners, as demonstrated by this temporary dam created in front of a South Battery home before Hurricane Dorian approached the city in September 2019. Robert Behre/Staff 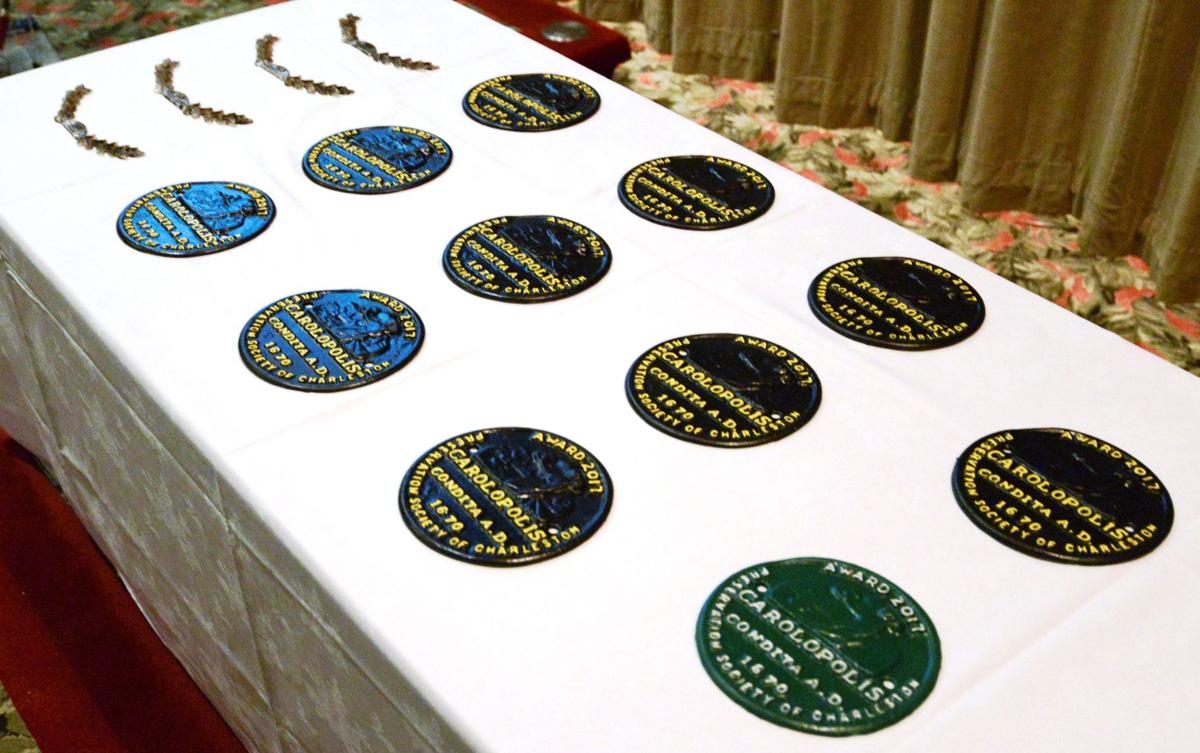 The Preservation Society of Charleston has been recognizing notable preservation work for generations with its Carolopolis Awards (above). This coming year, the society will expand its criteria to recognize work that promotes resiliency.Michael Parks Photography.

The threat of flooding has been increasingly on the minds of historic homeowners, as demonstrated by this temporary dam created in front of a South Battery home before Hurricane Dorian approached the city in September 2019. Robert Behre/Staff

The Preservation Society of Charleston has been recognizing notable preservation work for generations with its Carolopolis Awards (above). This coming year, the society will expand its criteria to recognize work that promotes resiliency.Michael Parks Photography.

The Carolopolis Awards — Charleston's longest-running awards that recognize owners who have furthered the city's preservation cause through their work on a particular building — have evolved significantly since they first were handed out more than two generations ago.

The awards, whose name is a linguistic mashup of the Latin word for "Charles" and the Greek word for "city," once had colorful categories such as "pioneering restoration" and "commendable alterations."

More recently, the Preservation Society of Charleston broadened its awards to include a new "interior" category to recognize excellence in preserving the inside of publicly accessible buildings — work that is not controlled in any way by the city's Board of Architectural Review. The awards also were tweaked to include a "Pro Merito" category to recognize important work on buildings that already have received a Carolopolis award. Its geographic range has grown, too, from almost exclusively south of Calhoun Street downtown to work across both the Cooper and Ashley rivers.

And this year, the awards will evolve yet again to recognize those working to face a new and serious threat to the city's historic properties: rising seas and climate change.

"Over the past several years, we have witnessed flooding events with more frequency and intensity that have significant impacts to both our historic built environment and quality of life," says Erin Minnigan, the society's director for preservation and planning. "We acknowledge that making properties more resilient is the best thing for their long-term preservation."

The society and others in Charleston's preservation community once resisted elevating historic buildings, but now are generally supportive, particularly if the property is more vulnerable to flooding and if its details are handled sensitively. That was the case with one of this year's Carolopolis winners, the owners of 1 Water St. for raising their home by a full floor.

"The 1 Water St. project is a great example of an approach that successfully integrated resilient design with historic preservation and is to the caliber that we would hope to recognize through this new award category," Minnigan says, adding the award "sets an example for best practices for property owners and design professionals. That’s particularly true for the resilience category that seeks to set a national example and encourage people to consider effective resiliency measures."

While all sorts of resiliency work might be considered, those addressing flood risk are perhaps more likely to be recognized, particularly those following the National Park Service’s Guidelines on Flood Adaptation for Rehabilitating Historic Buildings.

The society will welcome award nominations for steps other than elevating buildings, possibly including dry floodproofing and temporary barrier systems. "This is the first year we are offering this award category, and we are excited to see the kind of projects nominated," Minnigan says. "Resilience is a pioneering industry, and technology will continue to evolve. ... We hope this award brings awareness to creative adaptation approaches, which could bring about policy change both at the local and federal level to promote attainable resilience options that any property owner can utilize."

The Carolopolis Awards' 68-year history has been a colorful one; many of the early winners were decided by pioneer preservationists Jane Thornhill and Elizabeth Jenkins Young riding around the city in a convertible looking at buildings. The society even felt compelled to stop giving out the plaques briefly in the early 1960s because of the ill will they stirred up (this newspaper didn't begin covering the awards as news until 1979). In 1964, only one award was given. In 1970, there were 143. In recent decades, the annual number has remained steady around a dozen or two.

Almost 1,500 Carolopolis Awards have been presented during the past seven decades, with each serving as sort of a Good Housekeeping seal of approval for some of the best preservation work in the city. Today, that best work increasingly includes not only what's most appealing to the eye, but also what's needed to keep the floors dry.