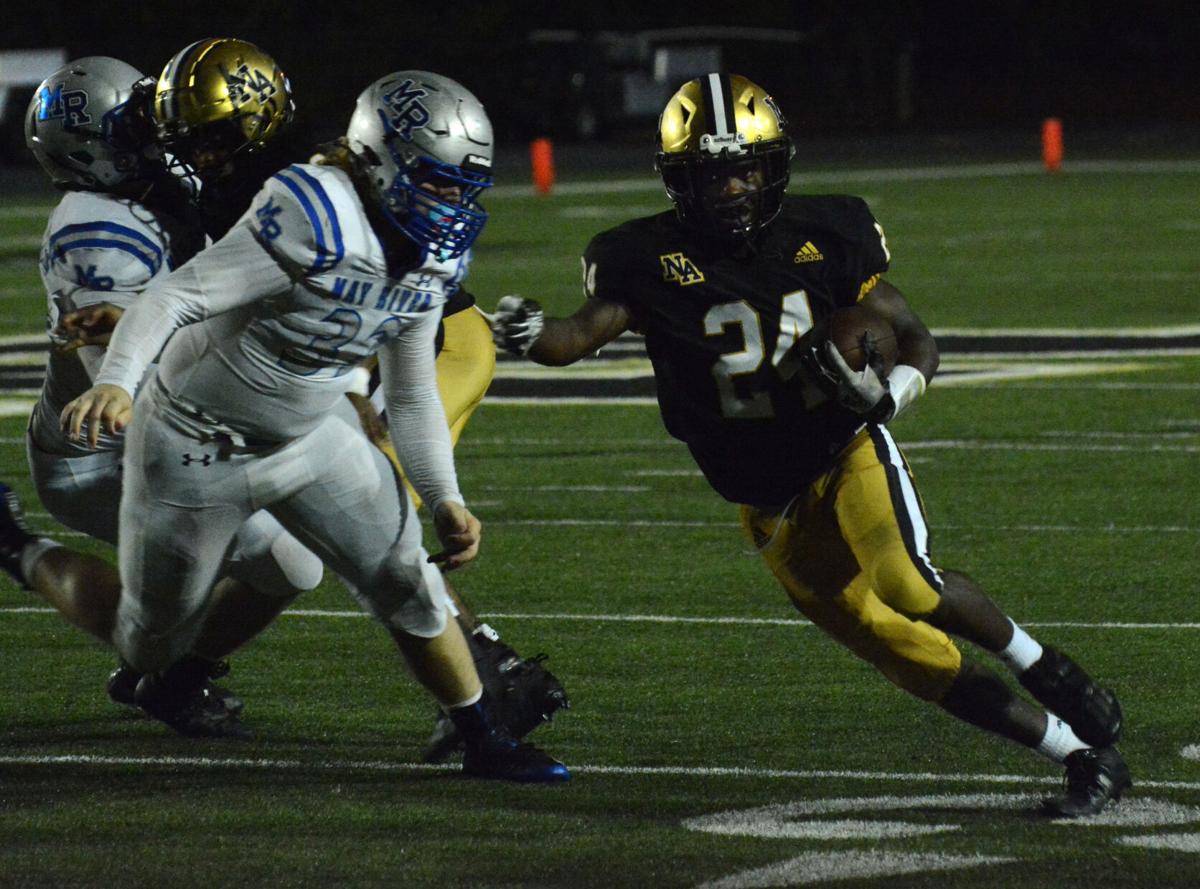 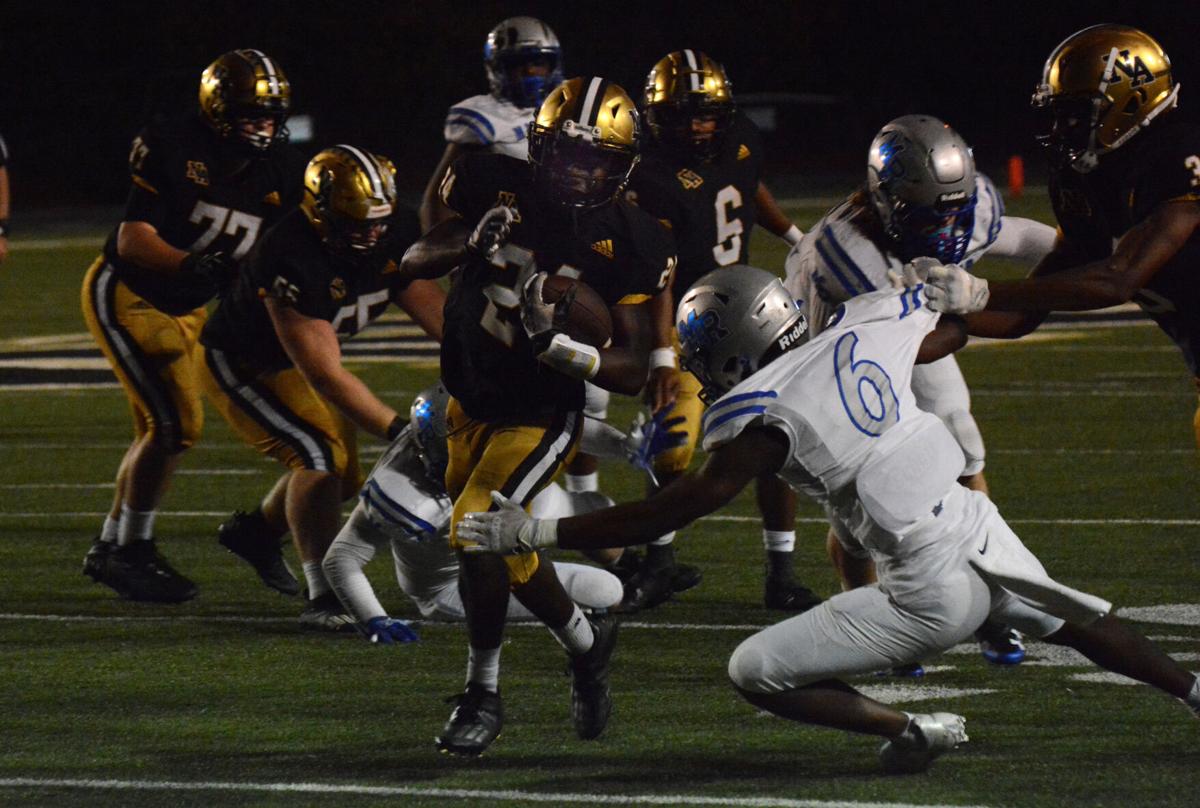 North Augusta High School's Taylon Washington is loose for yardage versus May River Friday evening, with the Sharks' Darrion Perry looking to make a stop. 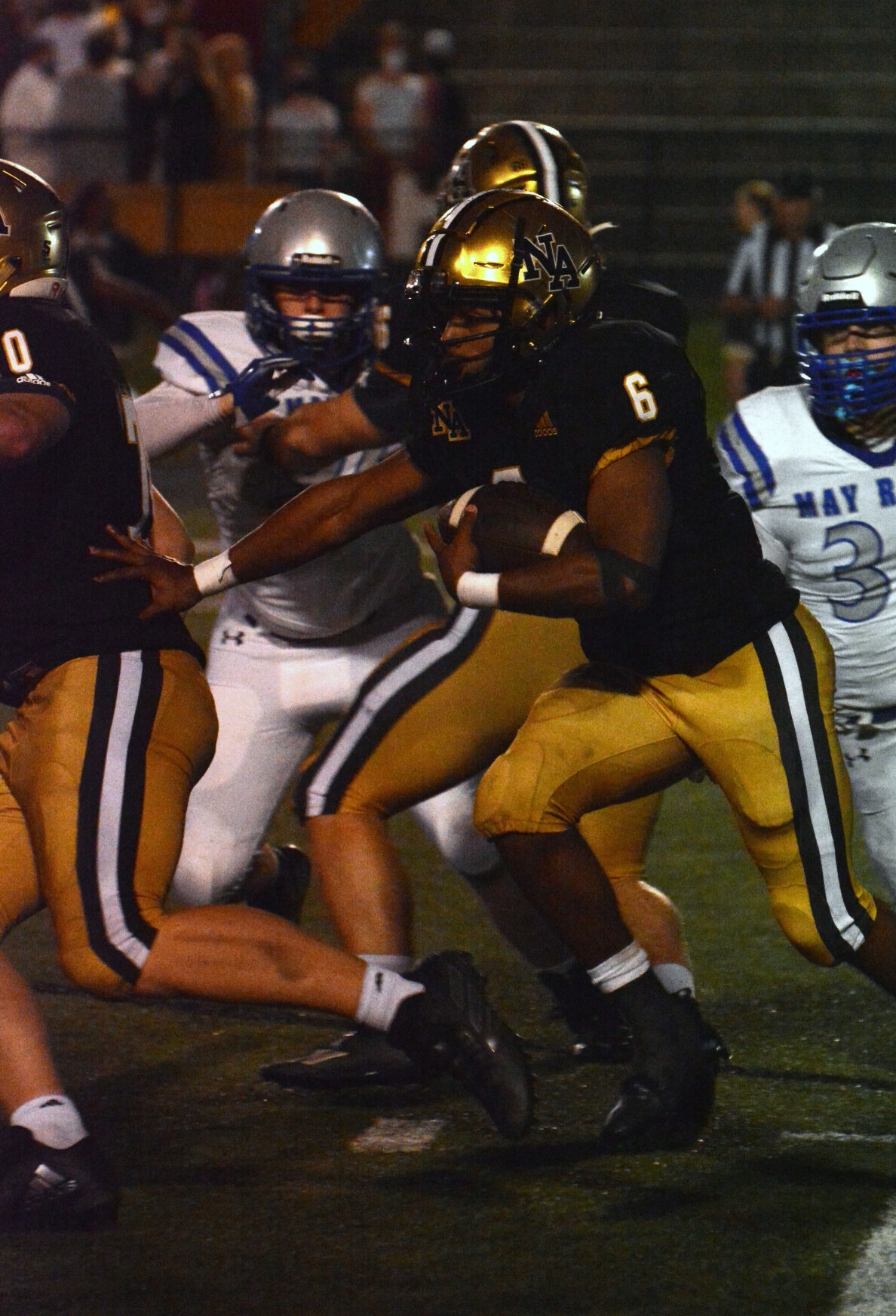 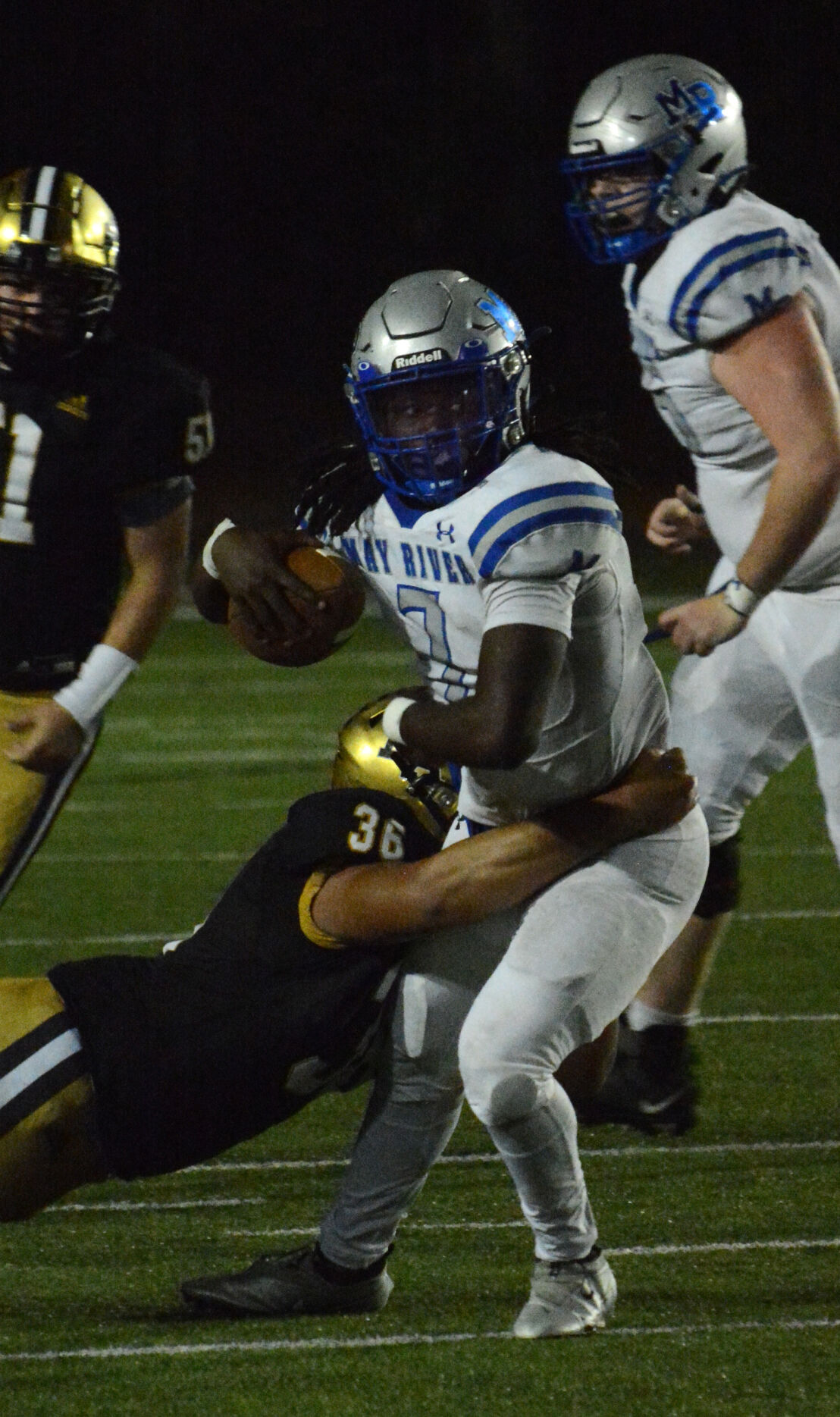 North Augusta High School's Taylon Washington is loose for yardage versus May River Friday evening, with the Sharks' Darrion Perry looking to make a stop.

NORTH AUGUSTA — After being held scoreless through three quarters, North Augusta stormed back to tie the game in the fourth and win in overtime in the opening round of the Class AAAA playoffs.

Senior receiver Grayson Bridgers ran a jet sweep from five yards out to put the Yellow Jackets on top 20-13 in overtime. On May River's extra period possession, Sharks quarterback Ahmad Green threw an end zone interception on fourth down to seal the game.

That sets up a second-round game next week at North Myrtle Beach, which eliminated the Jackets last year in a first-round, triple-overtime thriller at North Augusta.

The game was close throughout. On North Augusta's first possession of the game, Bridgers fumbled and May River recovered at its own 24-yard line. Green moved the Sharks down the field with a 27-yard run on a third down and a 39-yard run for a touchdown to put his team up 7-0 with 2:49 left in the first quarter.

After a North Augusta three-and-out, May River drove down the field again and kicker Jonah Comfort drilled a 32-yard field goal to make the lead 10-0. On the ensuing drive, the Yellow Jackets drove to the red zone and fumbled a handoff on the 4-yard line.

After halftime, North Augusta got the ball first and was forced to punt. After the return, two Yellow Jackets took 15-yard penalties each to give May River the ball at the North Augusta 28-yard line. However, Eli Jarrard picked off Green's pass to get the ball right back.

The Yellow Jackets were once again able to drive down the field, but still couldn't put any points on the board. They turned it over on fourth down at the May River 27. The Sharks drove the field and Comfort kicked a 30-yard field goal to extend the lead to 13-0 at the beginning of the fourth quarter. Those would be the last points they'd score in the game.

On the second play of their drive, North Augusta quarterback Austin Harrell threw a 77-yard touchdown pass to Bridgers, who made a great adjustment on his route to make the catch. Kicker Drew Stevens, however, missed the extra point so the Yellow Jackets could only cut the lead to 13-6.

May River got the ball back and drove to midfield, where they turned the ball over on fourth down. North Augusta swiftly moved down the field and Taylon Washington caught a 16-yard touchdown pass from Harrell. Stevens made the extra point to tie the game 13-13, with 6:53 left in the game.

Both teams struggled to get much going after this, until North Augusta drove to midfield with 44 second left. Facing fourth down, the Yellow Jackets tried a fake punt and couldn't convert.

May River got the ball and brought it to the 32-yard line at the end of the game, bringing up an odd sequence. A May River receiver caught a pass for a first down at the 32-yard line with three seconds left and the referees called him in-bounds. Thus, the clock would start when the ball was spotted and the field goal unit would not have time to trot on.

However, after some confusion with the clock, the referees allowed May River to set up their field goal unit before starting the clock which gave the Sharks a chance to win the game in regulation. Comfort missed the 49-yarder, however, and the game went to overtime.

In overtime North Augusta got the ball first and Bridgers scored, before the Yellow Jackets defense got the game-ending interception.

For May River, Green completed 14 of 27 passes for 147 yards and two interceptions, while rushing 19 times for 139 yards and a touchdown. Jaiden Jones rushed 14 times for 58 yards. Cameron Scott rushed nine times for 44 yards.