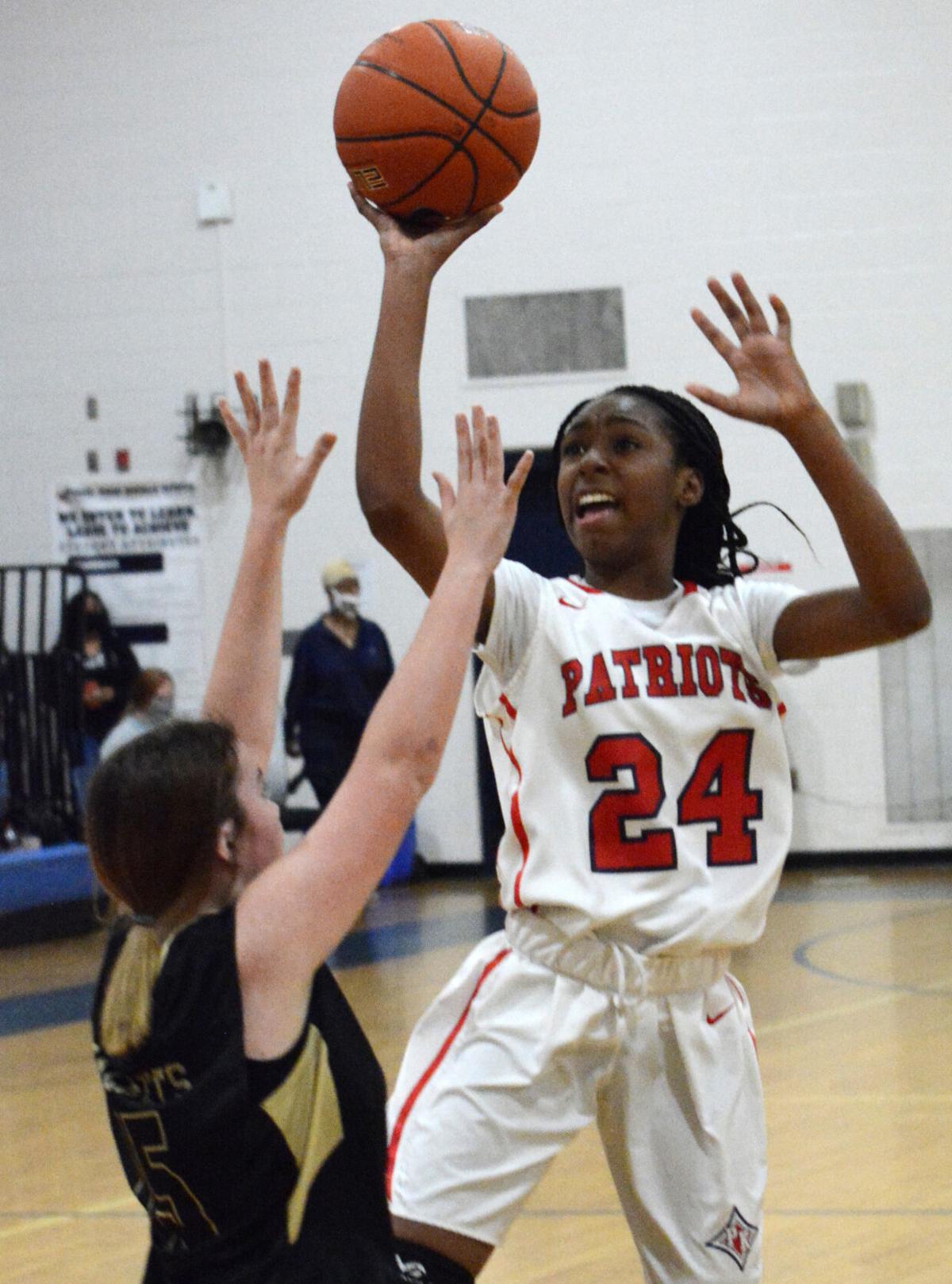 Paul Knox Middle School's Kenedi Wright, on her way to a game-high total of 23 points, launches a shot Monday evening against North Augusta's Danika Jones in the Patriots' runaway victory. 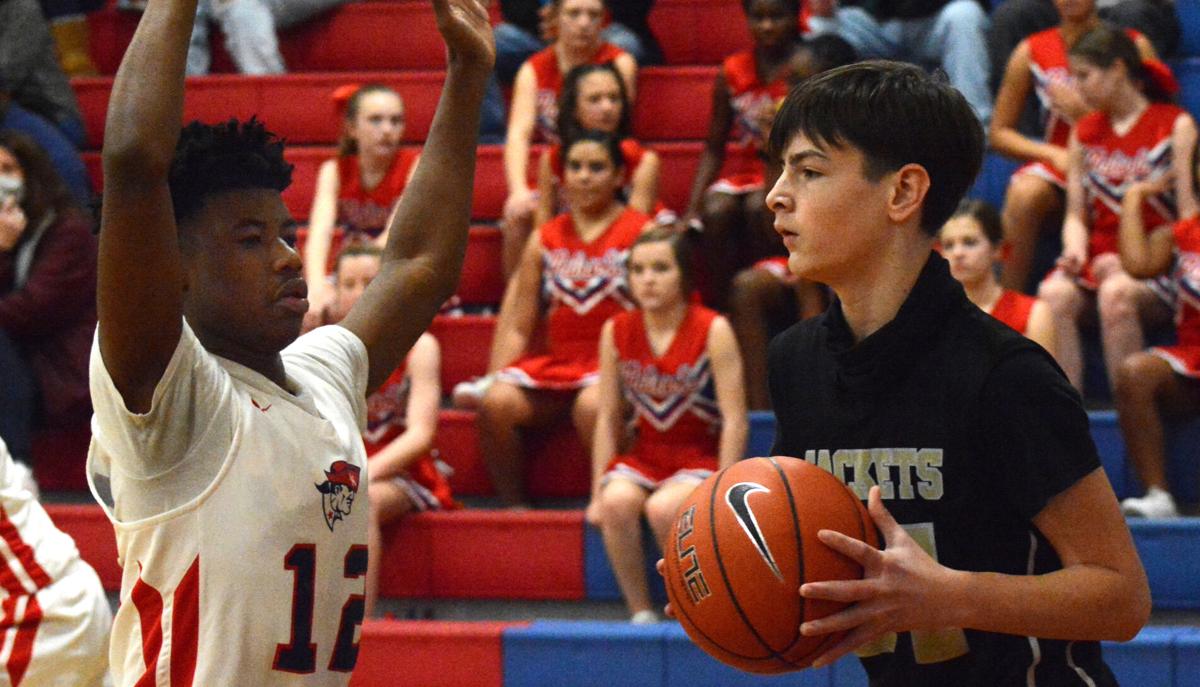 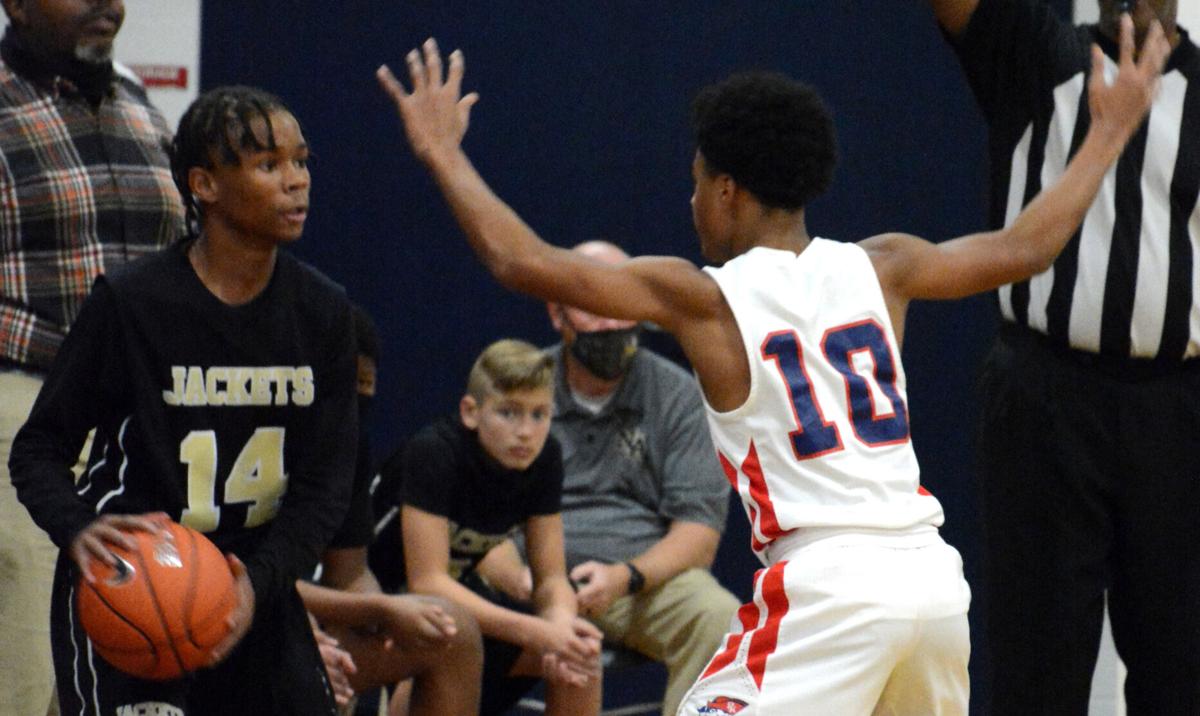 Paul Knox Middle School's Kenedi Wright, on her way to a game-high total of 23 points, launches a shot Monday evening against North Augusta's Danika Jones in the Patriots' runaway victory.

The ongoing pandemic has thrown more than a few roadblocks in the path of Cheryl Morris, Antonio Gary and their athletic compatriots at Paul Knox and North Augusta middle schools, but the basketball programs managed to hold things together for a pair of contests – two Patriot victories – Monday evening.

Morris, coach of the Patriots' girls team, saw her squad hold the Yellow Jackets scoreless until early in the fourth quarter. Kenedi Wright poured on 23 points in Paul Knox's 41-7 victory, boosting her squad to a 6-0 overall record. North Augusta's squad, having dealt with more cancellations and postponements due to COVID-19, slipped to 1-2.

"I think we've missed four or five games and a whole month of practice, so it's been very tough for us," said Ken Brown, North Augusta's girls coach, noting that the turbulence has been due to pandemic problems relating to his team and its opponents alike.

Morris noted, "We had two canceled and one postponed, and our boys team got quarantined once. The girls haven't been quarantined yet, so ... our girls team's been pretty lucky." She said Wright is normally the Patriots' top scorer, averaging 20-25 points per outing.

The boys game was relatively competitive, with Paul Knox jumping out to an early lead and maintaining it en route to a 53-35 win. Corey Tillman poured in 11 points for the victors, buoyed by eight from teammate Zedius Tillman. Leading all scorers in the boys game was North Augusta's Da'Chon Baskett, with 19 points.

Gary, coach of the North Augusta boys squad, said Monday evening that his squad has lost zero players due to the pandemic. "We're doing good ... We're hanging in there," he said, noting that his squad is loaded with eighth graders, having only two seventh graders on the roster. "We're just ready to get back to rolling."

"We had to cancel a couple of game – had a couple of kids with COVID here and there," said Chon Mathews, who coaches the Patriot boys, making similar comments. He said the squad, at the end of the year, "took a self-quarantine," and the results since then have been positive. Mathews noted that Jordan Rouse, averaging 15-17 points per game, is typically the Patriots' top scorer.