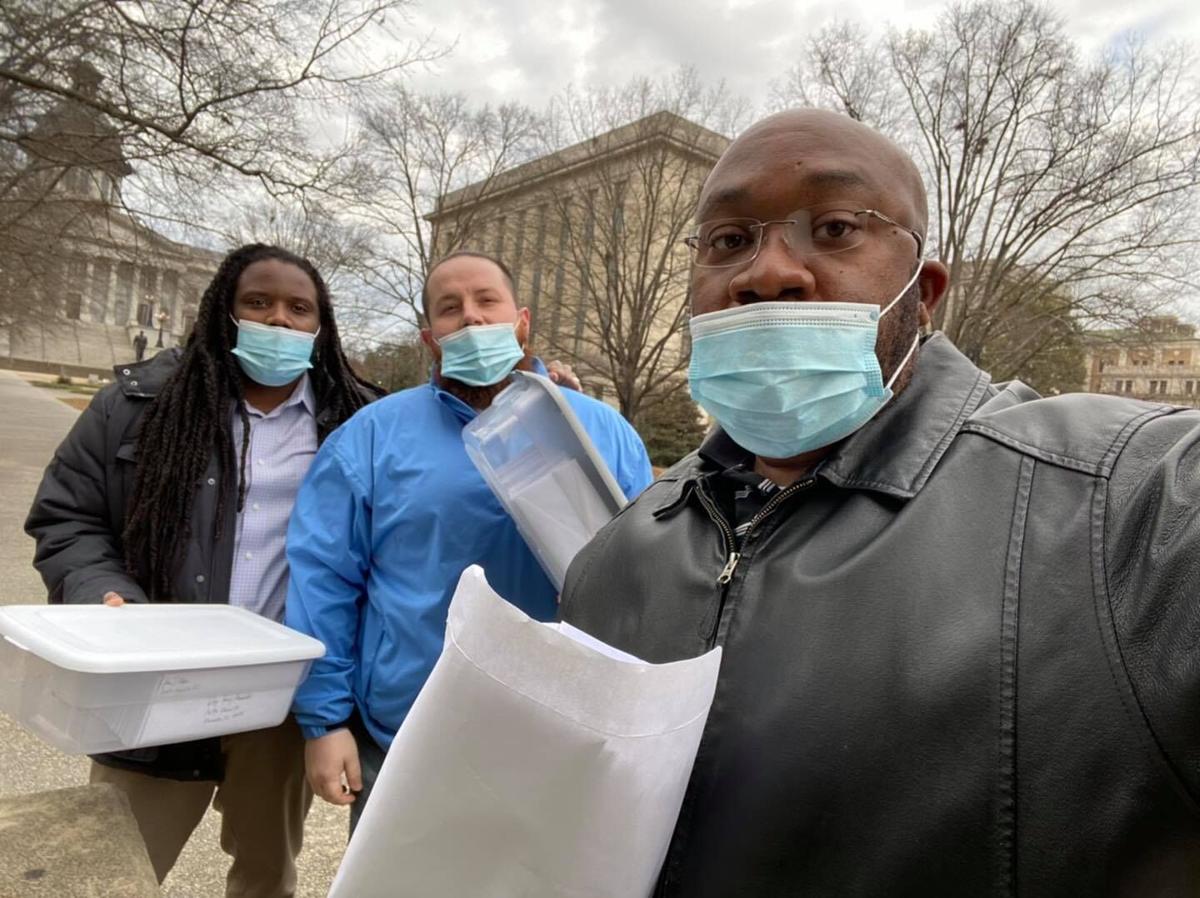 Richard Bush, left, Chris Hawkins and Ken Makin delivered letters to the South Carolina Statehouse Monday for the General Assembly regarding the Meriwether Monument. Not pictured is Jackson Webb, who also signed the letter. 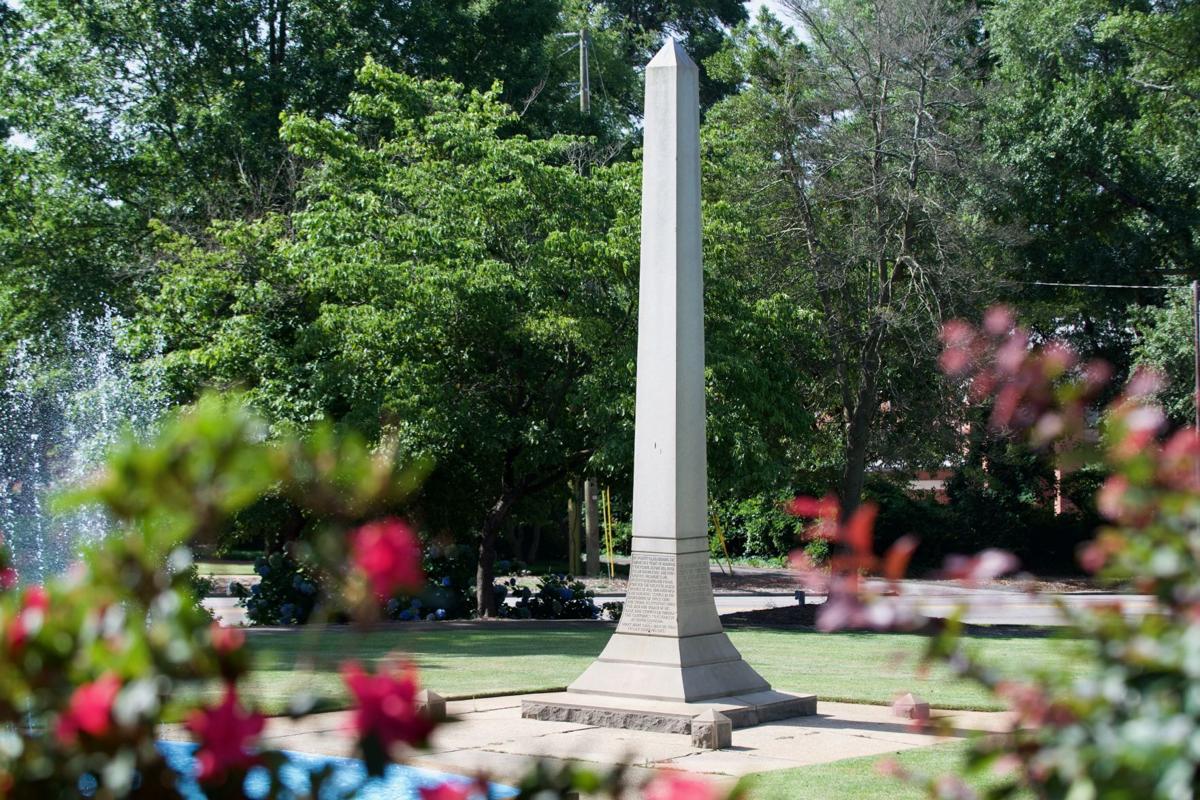 Richard Bush, left, Chris Hawkins and Ken Makin delivered letters to the South Carolina Statehouse Monday for the General Assembly regarding the Meriwether Monument. Not pictured is Jackson Webb, who also signed the letter.

As the 124th South Carolina General Assembly prepares to convene on Tuesday, a group of concerned residents have dropped off letters to the Legislature petitioning the removal of the contentious Meriwether Monument. The city of North Augusta has also sought guidance from the General Assembly on the monument.

The monument honors only the one white man killed in the Hamburg Massacre using language often referred to as racist and offensive. Seven Black men were also killed during the massacre, but their names are not included on the monument or anywhere in Calhoun Park where the monument stands.

Ken Makin, Aiken County resident and host of Makin’ a Difference podcast, posted on Facebook that he and others had dropped off 170 letters to the South Carolina General Assembly regarding the monument.

The letter was sent from Makin as well as three other native North Augustans: Richard Bush, Chris Hawkins and Jackson Webb.

Racially divisive symbol: What is the Meriwether Monument in North Augusta?

A century-old monument with a racially divisive inscription in downtown North Augusta will be the end point of a Black Lives Matter march planned for June 20.

“I am reaching out for your assistance in resolving a matter of white supremacy in North Augusta, South Carolina ... I am reaching out to each member of the General Assembly with the expectation that you all will not only denounce, but demand the immediate removal of this abhorrent and ahistorical obelisk," the letter reads.

It mentions the wording on the monument, which refers to the “supremacy” of the “highest ideal of Anglo-Saxon civilization.”

The letter also cites an opinion on the monument from the South Carolina Attorney General’s office, which called the monument an “abhorrent testament to Jim Crow,” and advised the city to go to the General Assembly “for relief from the offensive nature of this Monument.”

“This Office supports and would applaud the General Assembly’s repeal of theses statutes erecting the Meriwether Monument,” the attorney general's opinion states.

A handful of markers, memorials, monuments and more glorifying or commemorating the Confeder…

He mentioned the attorney general's opinion.

"Charleston's and Orangeburg's elected officials have already taken the lead to remove some of these vile statues. The opinion from the state attorney general's office is clear in its intent and where the authority lies to act on the monument."

Makin said the issue is about decisiveness.

“We’ve dealt with this issue more than three years. The AG’s opinion has provided a unique opportunity for the legislature to act quickly on this issue. There is bipartisan support for its removal and during this time of political angst, this legislature can make a clear stand against messages of white supremacy,” Makin said.

The letter also asserts that the city of North Augusta’s mayor and city council “lacks the leadership and courage to rebuke, let alone remove this hateful statue.”

“For the better part of three years, the mayor and city council have hidden behind the state’s Heritage Act in a way that makes it seem as if they wish to protect this supremacist message,” the letter reads.

The city has sought information from the General Assembly regarding ownership of the monument.

City Attorney Kelly Zier told City Council on Monday that correspondence went to the speaker of the House and president of the Senate “45 days ago at least.”

“Actually we didn’t anticipate there would be any kind of response until after the legislature got back in session this year,” Zier said.

In order to get the Meriwether Monument removed, it will have to be taken up with the Genera…

“We are hoping to receive a response, but at this point, we’ve got nothing back relative to the letters that we sent asking just that question, whether or not the legislature claimed any ownership of it.”

Jay Lucas of Darlington is the speaker of the House and Harvey Peeler of Gaffney is the president of the Senate.

State Rep. Bill Hixon, who represents the North Augusta area, said he has a meeting on Tuesday with Lucas and said he will mention the letter to him. Hixon also mentioned that the Attorney General’s office last year requested the state Supreme Court make a determination on whether the Heritage Act, which protects certain monuments and buildings, violates the South Carolina Constitution.