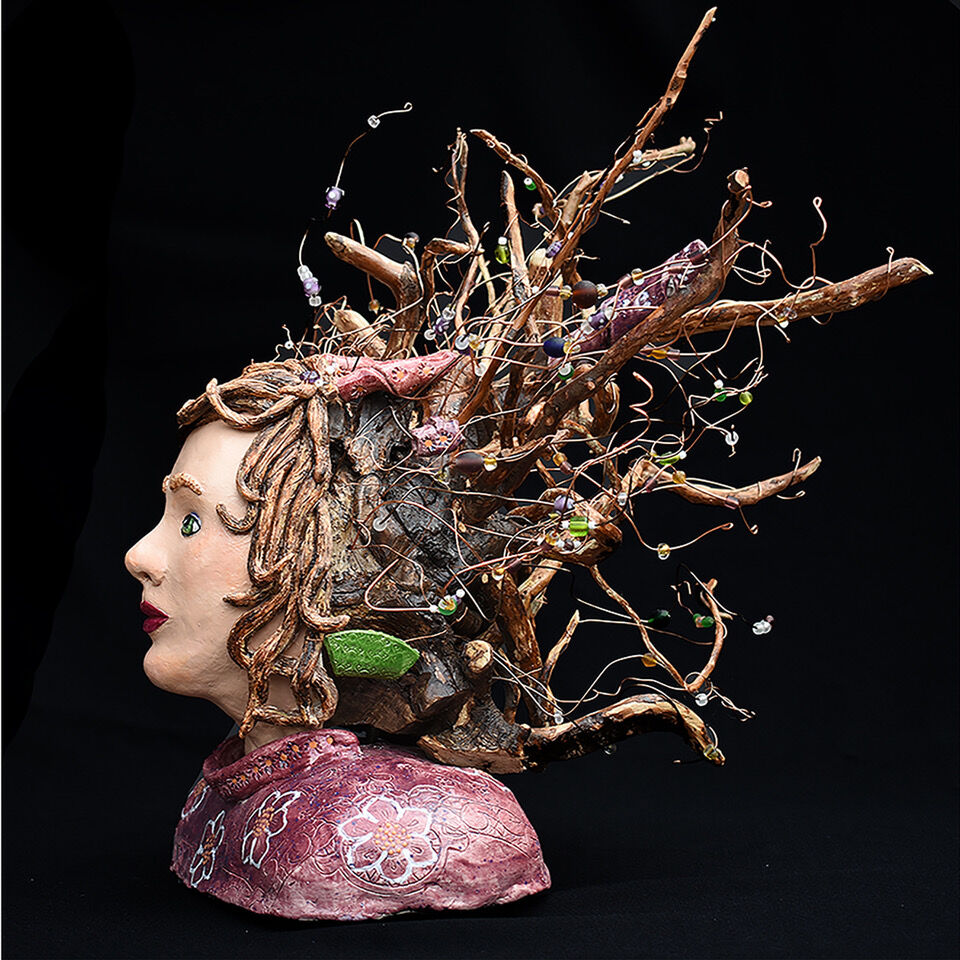 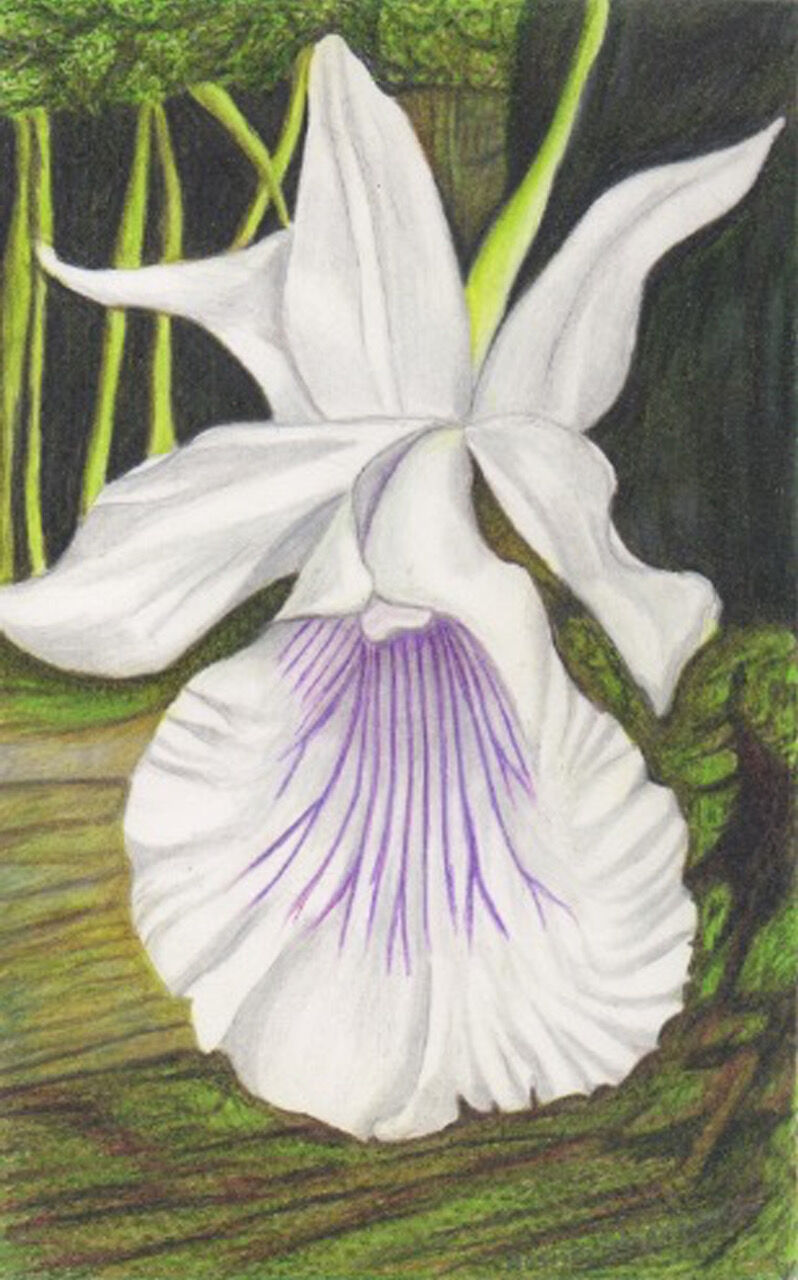 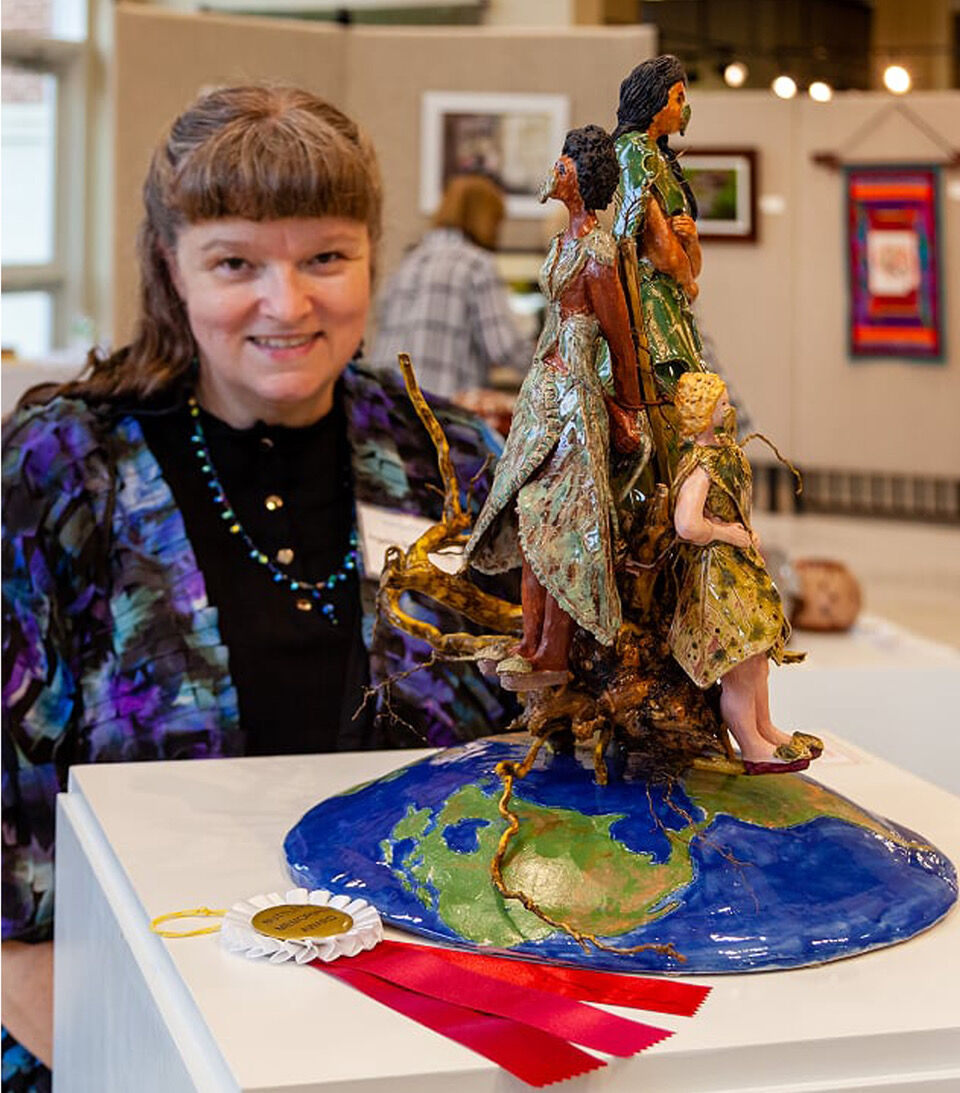 Angelika Selman-Bondar is the Artist of the Month for the North Augusta Artists Guild. She was born in Hof, Germany, while her father was stationed there during military service. Her family returned to this country when she was a child and she has lived primarily in Alabama, Florida and Georgia. She became interested in drawing and making other forms of art as a child as a way of self-expression. She was a shy child and these quiet activities suited her temperament. Her grandmother was very influential on Angelika’s development. Her grandmother was continually engaged in some type of work such as sewing, crocheting and even woodworking. Angelika took these lessons to heart and still enjoys keeping busy with her artwork. She creates art every day and dislikes being idle.

Angelika received her Bachelor of Fine Arts degree from Augusta University in 1982 with minors in education, German studies and the sciences. One of her most influential teachers, Nathan Bindler, was a classical artist who worked in a Renaissance style. She pursued a career as a teacher of visual arts and the German language in the public school system. After more than 30 years of teaching in Georgia, she retired in 2014 although she still teaches art workshops and does private lessons. She teaches a weekly children’s art class at Immaculate Conception Church in Augusta and teaches at a summer art camp at the McCormick Arts Council at the Keturah (MACK). She has worked with all ages from kindergarten to high school. She loves teaching and she tries to help each student develop their unique talent. She wants students to appreciate how art and design enrich every aspect of our lives with beauty through such things as clothing, landscaping and interior decorating.

Angelika’s life experiences have also contributed to her art expertise. She has been a show judge for many years for African violets and other Gesneriads which has helped her develop the skill to detect the slightest differences in blossoms and leaves. While attending AU, she worked at a veterinary hospital. This experience helped her develop knowledge of animal anatomy and proportions that she often uses in her sculptures. Both experiences greatly enhanced her skills of observation.

Angelika has three favorite artists. Contemporary American realist Janet Fish is known for her colorful and intricate still life compositions. Artemisia Gentileschi (1593-1653) was an Italian baroque painter who is now considered one of the most accomplished 17th-century artists. Angelica Kauffman (1741-1807) was a Swiss neoclassical painter who had a successful career in London and Rome and is known for her portraits and landscapes. Angelika works in many different mediums such as watercolor, colored pencil, photography, printmaking and clay. It was important to her to be skilled in many different mediums to offer the best possible instructional techniques to her students. During her years as an art instructor, she continued her art education at various places such as the Atlanta College of Art, Savannah College of Art and Design, the High Museum and the Morris Museum.

While Angelika’s 2D art is very detailed and realistic, most of her assemblages and mixed media pieces are abstract. All of her art relates to the theme of the Earth and the beauty of the natural world. She paints some landscapes on location as well as working from her photographs of such things as flowers and butterflies. She has done many realistic paintings of flowers to capture their fleeting beauty to share with the viewer. She hopes her work will make viewers more aware of the ephemeral beauty that surrounds us. Many of her works relate in some way to the Earth and the human relationship to the environment. She often combines organic found elements such as twigs, roots and pods with her clay creations. She hopes that viewers will see these everyday objects in a new way once they are incorporated into an art piece. She wants viewers to think more deeply about the beauty of our world and their relationship to nature. Her art often combines several mediums to create a unified, interesting and thought-provoking finished piece. Her ceramic sculptures are often figurative and incorporate many techniques and textures as well as found objects.

Angelika’s art has been exhibited at many places in the Southeast with many pieces in private collections in the U.S. and Europe. She has received many awards from juried exhibits for her work as well as awards for her art teaching. At recent NAAG shows her mixed media sculpture, "Bad Hair Day," won the Peoples’ Choice Award and her sculpture, "Mother Earth’s Children," won the Ron Butler award. She is a member of the Artists Guild of Columbia County, Gertrude Herbert Institute of Art, the Morris Museum, the Harlem Arts Council, Georgia Educators Association, the Ceramic Arts Network, Clay Artists of the Southeast as well as the North Augusta Artists Guild. When she is not making art, she enjoys spending time with her husband and three grown children. Her daughter is also an artist who just completed work for a Master of Fine Arts degree.