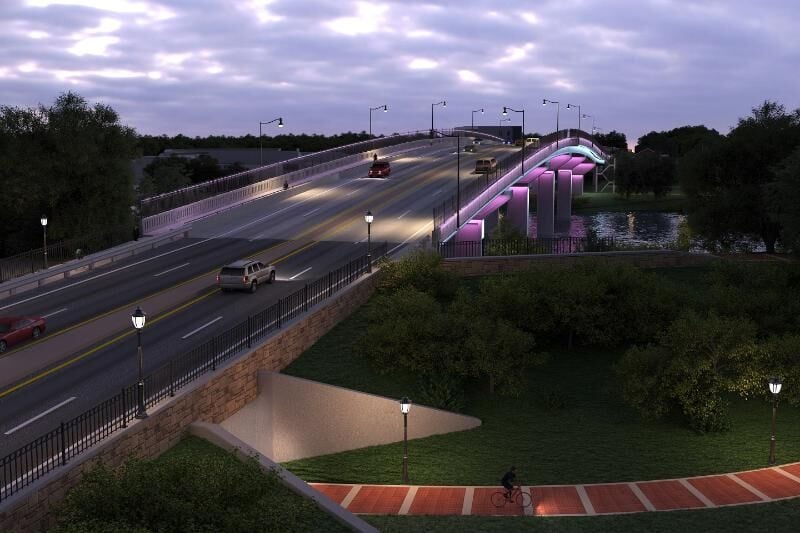 The Georgia Avenue bridge between Augusta and North Augusta is due for a tear down and replacement starting in 2025. The new bridge, expected to be complete in 2029, promises trail interconnectivity, safer passage for both pedestrians and vehicles, and aesthetic features like LED lighting. 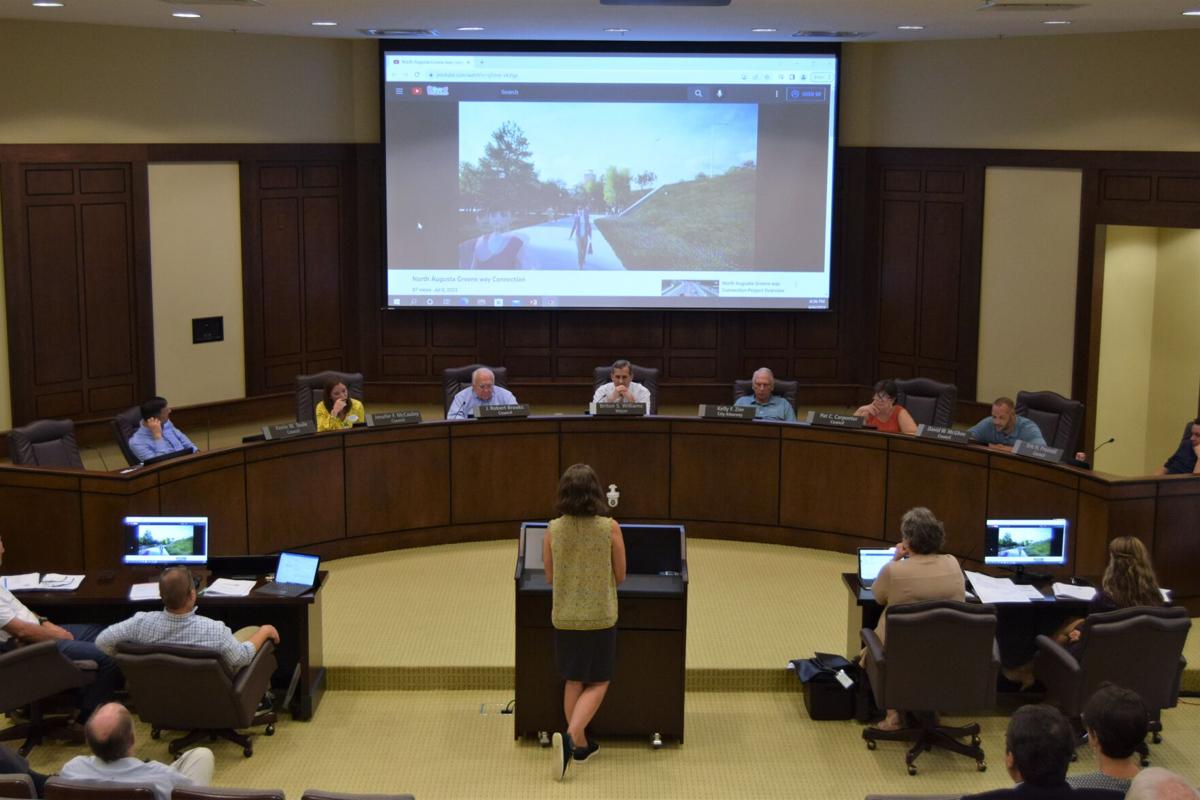 Erin Murphy, environmental lead on the Georgia Avenue/13th Street bridge project, spoke to North Augusta city council about the project's impact to public spaces Aug. 8. City council on Aug. 15 formally backed GDOT's assertion that the impacts would not be detrimental, thereby opening up the project to federal funding. 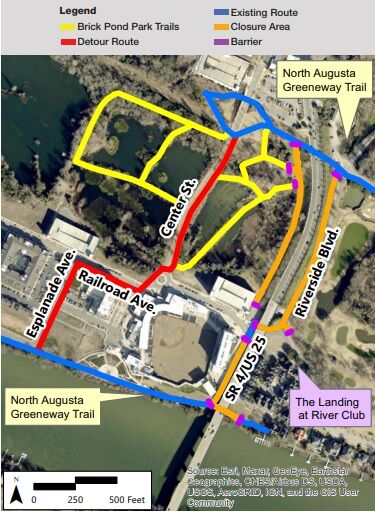 The North Augusta Greeneway and Brick Pond Park trails will be impacted during construction of the new Georgia Avenue/13th Street bridge, scheduled for 2025-2029. 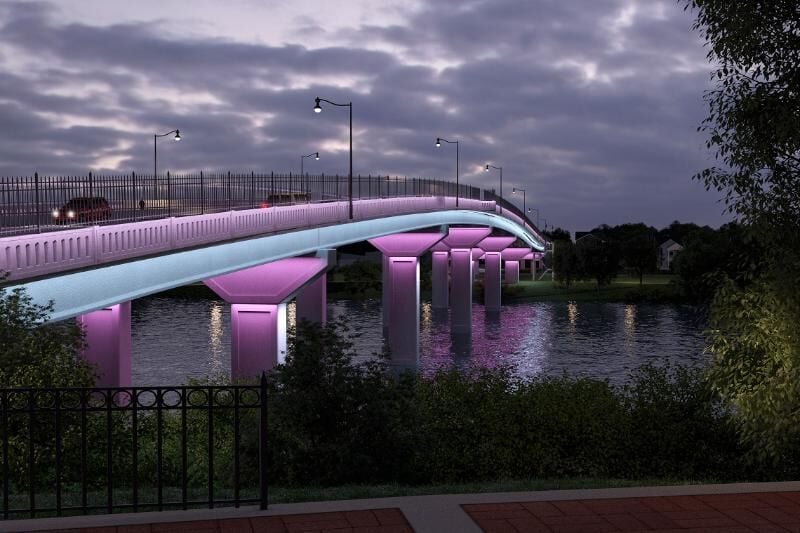 LED lighting on the bridge railings and under-deck are part of the design plans for the new Georgia Avenue/13th Street bridge between Augusta and North Augusta. 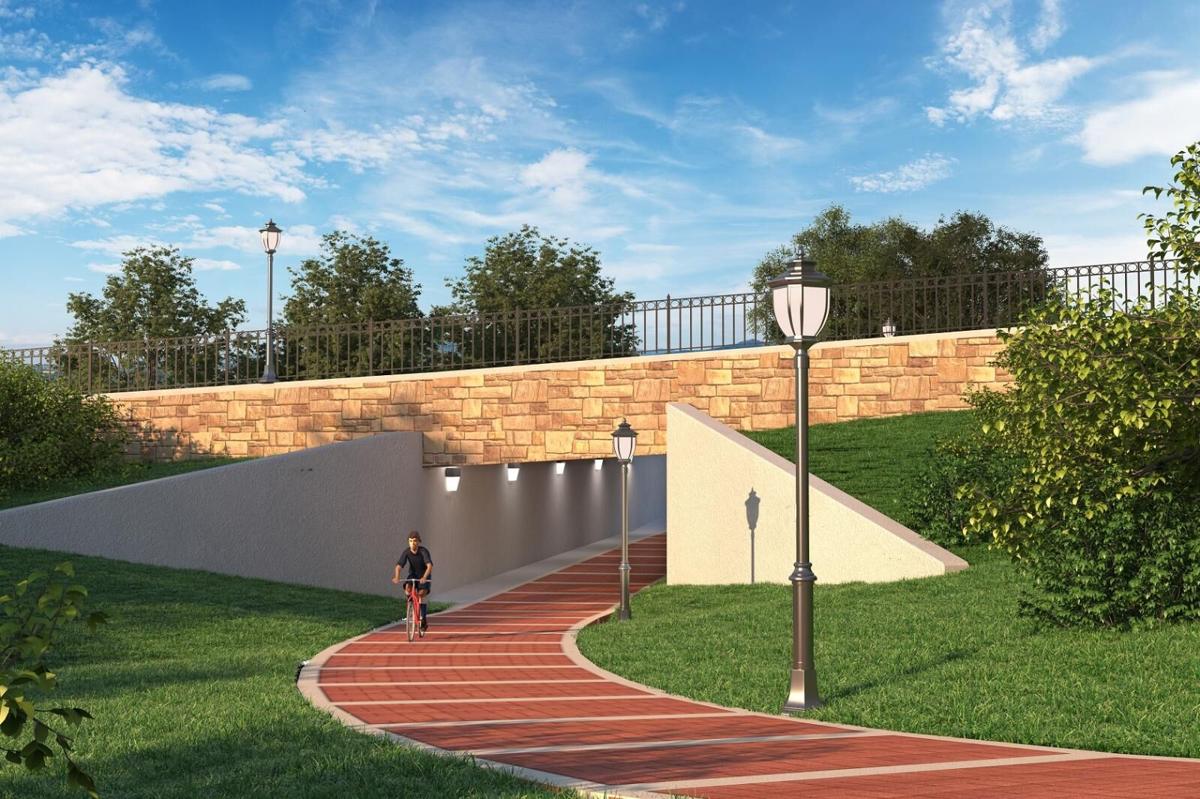 A concrete underpass will connect the Bartram and Augusta Canal Historic trails. Both trails will also have connection with the North Augusta Greeneway via a 10-foot-wide shared use path over the Savannah River.

The Georgia Avenue bridge between Augusta and North Augusta is due for a tear down and replacement starting in 2025. The new bridge, expected to be complete in 2029, promises trail interconnectivity, safer passage for both pedestrians and vehicles, and aesthetic features like LED lighting.

Erin Murphy, environmental lead on the Georgia Avenue/13th Street bridge project, spoke to North Augusta city council about the project's impact to public spaces Aug. 8. City council on Aug. 15 formally backed GDOT's assertion that the impacts would not be detrimental, thereby opening up the project to federal funding.

One of the main thoroughfares into North Augusta is due for replacement in 2025.

The Georgia Department of Transportation has scheduled the tear down of the “structurally deficient” Georgia Avenue/13th Street bridge for 2025 and with completion of the new bridge forecast for 2029.

The new construction will also improve upon recreational amenities near that bridge, project leaders say.

Two riverfront trails on the Augusta side that are now separated by four lanes of vehicle traffic will end up joined together when, come 2029, Bartram Trail will be directly connected to the Augusta Canal Historic Trail via a concrete underpass. The two will then get a cross-river linkage with the North Augusta Greeneway.

The overall revamp of the Georgia Avenue bridge, said Erin Murphy, environmental lead on the project, will “really enhance greatly the use of these park facilities by connecting them to each other as well as providing direct access to the city of Augusta across the river.”

GDOT did say that construction on another big Augusta-North Augusta thoroughfare, the Interstate 20 bridges over the Augusta Canal and the Savannah River, will be wrapped up before the Georgia Avenue bridge is knocked out.

Work on I-20 to continue into 2023; completion expected before Georgia Avenue project

GDOT has scheduled a start date on the Georgia Avenue project for sometime in 2025 with the exact day and month to be determined.

What is known, though, is that nearby trails and their adjoining parks will be affected during construction.

These impacts are what North Augusta city council reviewed Aug. 8 before signing off Aug. 15 on a “concurrence of no adverse effect." In layman’s terms, that's a backing of GDOT’s assertion to the Federal Highway Administration that the impacts this project will have on public spaces won’t be detrimental in future – such a determination opens the project up to federal funding.

GDOT expects that North Augusta’s Greeneway and Brick Pond Park trails will both require some kind of detouring for the anticipated four years of bridge construction. Access to Water Works Park will also be limited during that time.

On the Georgia side, Bartram Trail and the Augusta Canal Historic Trail – the trails either side of 13th Avenue and running along the Savannah – will also be impacted.

The good news? After those four years, all of these trails will be interconnected and the Georgia Avenue Bridge itself a safer thoroughfare.

Here’s what’s going down when construction starts in 2025:

First off, the riverfront section of the North Augusta Greeneway west of the Georgia Avenue bridge will remain completely open. But riverfront access near the Landing, immediately east of the bridge, will be cut off, barring a small strip on the extreme eastern end.

Most heavily impacted will be that section of the Greeneway along Riverside Boulevard, which will be completely blocked off during bridge construction. Access to Water Works Park will be open only at the tunnel. Folks on foot or cycle who want to get from Buena Vista Avenue down to the riverbank will be redirected to Center Street, then west on Railroad Avenue and south along Esplanade.

The trails associated with Brick Pond Park will also be a bit disjointed during construction – their access points onto the Riverside Boulevard portion of the Greeneway will be dead-ends until the project finishes.

In Augusta, direct access to both the Bartram and Augusta Canal trails will be blocked off at 13th Street for the duration of construction. The two will otherwise be largely unimpacted – their lengths along the Savannah will stay open – with the only big detour being one to Reynolds Street between 10th and 14th streets.

Preliminary engineering began on the $56.6 million Georgia Avenue/13th Street bridge replacement project in 2017. The full scope of it includes the 13th Street roadway from Broad Street in Augusta up to Center Street in North Augusta.

Aside from the basics of correcting what GDOT says is a “structurally deficient” bridge in “substandard condition,” the new four-lane bridge linking the cities’ downtowns is also expected to be a bit more kind to pedestrians – and a bit more aesthetic.

The existing Georgia Avenue/13th Street bridge has only a narrow walk on its southbound side and no shoulder or physical barrier.

When the new bridge is up, there will be a trebling of the area designated for walking and cycling – as well as the peace of mind that comes with having a physical barrier between yourself and 35-plus mph traffic.

A 5-foot walk on the northbound side is included in the plans, as is a 10-foot “shared use” path on the southbound side that would be for both pedestrians and cyclists. That path is what will connect the Augusta trails with the Greeneway.

An 8-foot shoulder with physical barrier will also separate that southbound path from vehicle traffic.

From an aesthetic standpoint, colored LED lights will illuminate the bridge railings, the under-deck and the bridge piers.